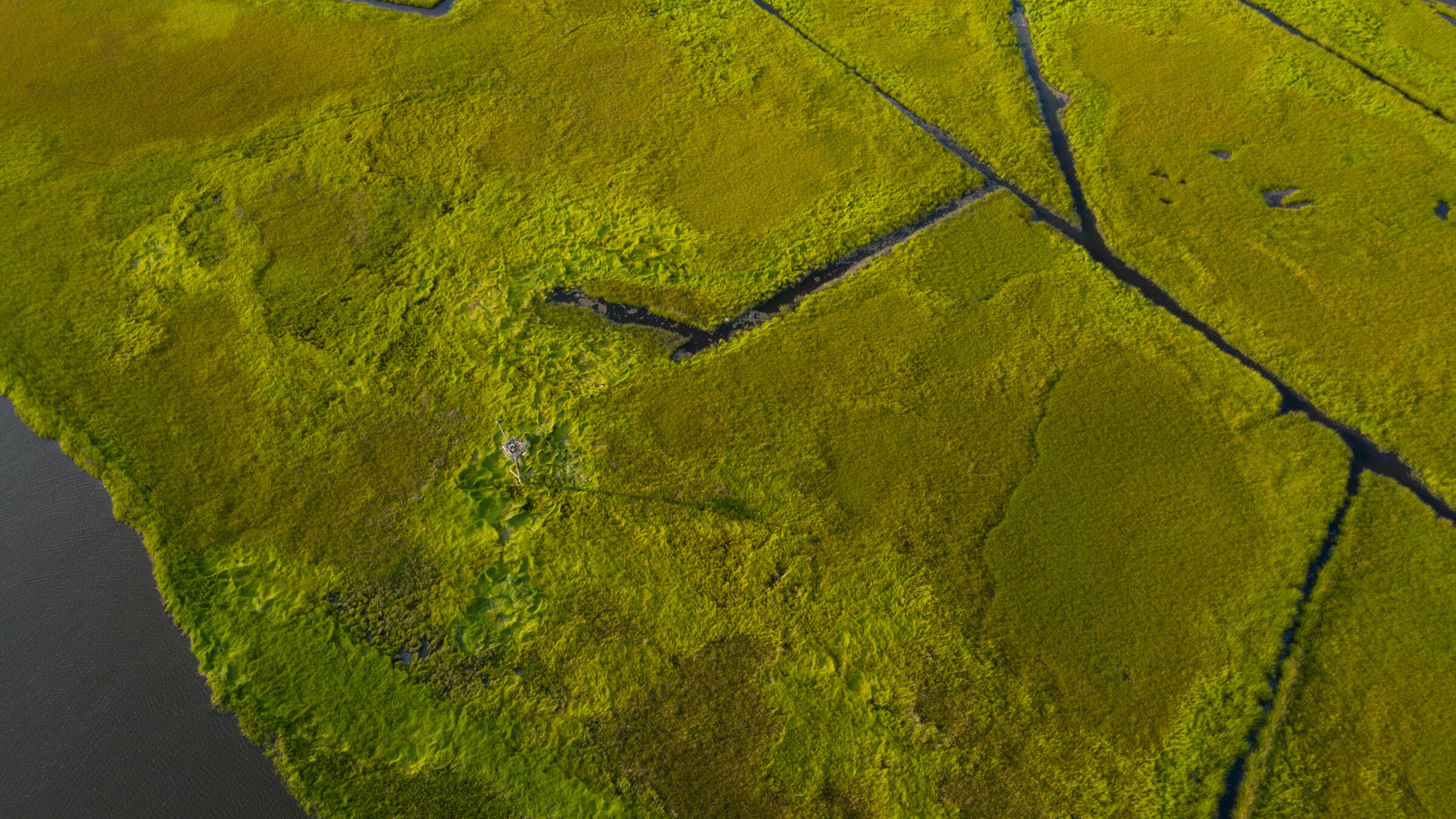 The New Jersey Osprey Project uses a drone to monitor Osprey productivity in remote marshes. This photo is taken about 150 feet in the air, or the distance where an Osprey starts to become alert. From this height, identifying individuals in the nest can still be difficult, but any closer could really disturb the birds. Photo: Ben Wurst/New Jersey Osprey Project

Drones and Bird Photography: Why It's Just Not Worth It

You're not going to get the shot you want without putting birds at risk.

Of all of challenges of wildlife photography, perhaps the most difficult to master is appropriate distance: We want to get as close as possible to get great shots, while staying far enough away to keep subjects from becoming stressed, behaving unnaturally, or fleeing. In between those extremes is a gray area of extremely subtle ethical considerations, when an animal is aware of a photographer's presence yet not showing any overt signs of being bothered. This is why serious avian photographers invest much money and time into extending their "reach" with super telephoto lenses, blinds, and other equipment and techniques to get closer—but not too close.

High-quality camera drones have added a new dimension to this careful calculus over the last decade, dangling the tantalizing promise of smashing this dichotomy and getting photographers closer, with new angles, less disturbance, and at a lower cost. Unfortunately, however, this is a false promise.

The reality is that current drone technology actually puts photos much farther away while introducing new, less predictable risks to birds and other wildlife. You don't see professional bird photographers using drones for good reason: They are a lose-lose scenario for both photographers and animals.

To take adequately detailed photos of birds on the ground or in the air, for example, you generally need to get closer than drones safely can. While drones are tiny and autonomous, they are also noisy, conspicuous, and unfamiliar to most animals, especially to wild birds. And for many accessible wild animals living in close proximity to people, drones can be even more frightening than we are. This is especially true for wild birds that respond to drones as they would to threatening predators. This is why drones should never be flown over nesting birds for photography.

For the past five years, I've worked with wildlife managers in test studies for using drones to monitor Osprey nests (and other nesting birds) in coastal New Jersey. To manage the population for the birds' own benefit, scientists must necessarily disturb the Osprey families. Most often this is done by putting a ladder up to the nest, causing a brief but extreme disturbance. While it is now well established that drones can easily disturb wildlife, for wildlife management (unlike photography), it is a question of degree. If, for example, checking an Osprey nest with a drone can be less disruptive than throwing a ladder up to the nest, than the calculus of whether it is a worthwhile activity may be different than for that of a photographer. The end result of these studies suggested that the minimum safe distance for drones was 200 feet. The animals became more alert at 150 feet. And below 120 feet, the disturbance was noticeably extreme.

I've found that these distances are actually much farther than most people assume, and much farther than many photos I see shared online by new pilots. On foot, avian photographers often work safely with their subjects for hours at distances less than 100 feet. So drones provide almost no advantage in terms of reach or stealth. They might be small, but they are not invisible, nor are they silent.

All of these misconceptions about drones can, together, be a recipe for disaster.

The fact that a drone doesn’t get you closer to subjects is made worse because small, consumer drones only carry the tiniest, specialized cameras (usually a sports-action camera like a GoPro). While these cameras are amazing in their own right, they are the opposite of what wildlife photographers want. They are the widest-angled cameras on the market, designed to capture sweeping landscapes, and excel at capturing details only at ultra-close ranges of just a few feet or less. At safe distances, wild birds are almost impossible to see in these kinds of photos. When working with Osprey nests, even at 120 feet it is still almost impossible to discern the presence of eggs or chicks in the nest using one of these cameras. (When someone tells me they want to try using a drone for bird photography, my first suggestion is to spend a weekend using their GoPro to photograph birds without a drone. Needless to say, the experience is usually frustrating and disappointing.)

All of these misconceptions about drones can, together, be a recipe for disaster. That a camera drone is the wrong tool for wildlife photography is usually only discovered when a new pilot is in the air, struggling to see a tiny animal through an ultra-wide angle view. To compensate, a pilot might get dangerously close (and still not get the shot he or she was hoping for). Sadly, most people learn to avoid this activity only after putting an animal at risk.

Drone photography is a magnificent, stunning, modern art form. It just has little value in avian photography with exception of extreme aerial distance shots (like an overhead shot of a flock of birds that is so large the shape of the flock becomes the subject) taken with an ultra-wide angle lens.

Evolving camera technology is one of the most hopeful potential developments for ethical wildlife photography. Imagine a new generation of super telephoto lenses which would allow us to take the same photo we can today at twice the distance. Or a new ultra-high resolution sensor which would allow us to crop images more tightly with greater quality. Unfortunately, drones, as currently conceived and manufactured, are not the technological step forward most wildlife photographers need.