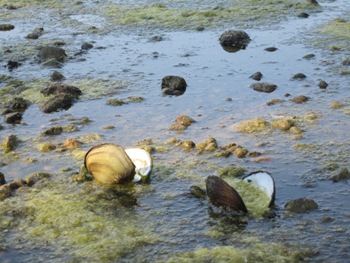 Martin Hamel from the University of Nebraska Lincoln received a text from his airboat mechanic on a Monday morning—there had been a large fish kill on the Platte River, a waterway that winds its way through Nebraska and past towns such as Louisville and Ashland. The next day, Hamel’s fears were confirmed. He and a team of others found the bodies of sturgeon and other fish spread across the muddy bottom of what had once been a flowing river. Partially eaten by scavengers and left to rot in the blazing sun, most of the fish were difficult to identify. Yet the team did find one fish that had been tagged five years before—it was an endangered pallid sturgeon, a fish that had originally been stocked into the Missouri River.

“The bigger concern is that we found one, which ones haven’t we found?” says Mike George, the project leader in the Nebraska Ecological Services field office for the Fish and Wildlife Services.

The drought that has spread across most of the United States has not only affected crops; it’s also affected wildlife. Fish and other river-dwelling species, some of them listed as endangered, have suffered the most with higher temperatures and lower flow rates.

Georgia Parham of the FWS has seen these issues firsthand. The water levels in the Tippecanoe River in Indiana have dropped lower and lower, threatening endangered mussels such as the fanshell. The river is a hugely important mussel bed, providing vital habitat for the endangered shellfish.

“I was out there a couple of weeks ago down below the dam and it’s pretty much a continuous mussel bed at that part of the river,” says Parham. “It’s pretty amazing.”

As the drought continues, though, the FWS is struggling to keep river levels high enough to support these mussels. They’re currently working with the Northern Indiana Public Service Company to maintain a minimum flow of water from the Oakdale Dam into the river.

Other places, however, are just scraping by. The Upper Colorado River Endangered Fish Recovery Program has had to deal with low flow rates on the rivers that they monitor, but the fish are still surviving. Unlike the summer of 2002, which came on the heels of several years of drought, this summer has come after an extremely wet year which saw record breaking flow rates. A study published last week in Nature-Geoscience even linked the drought that ran from 2000 to 2004 as contributing to global warming conditions.

Even so, the program has had to shut down vital fish passages this year due to the lack of water. The fish passages allow endangered species such as the Colorado pikeminnow and the humpback chub to migrate along the river and past dams.

If the drought continues into next year, the program might be seeing a few more problems. The warmer temperatures and lower flow rates allow invasive species, such as the smallmouth bass, to thrive and encroach on the habitat of native species.

Perhaps more worrying, though, are the wildfires that have ravaged the state. “We heard of a fish kill over on the Price River in Utah,” says Tom Chart, the program director of the fish recovery program. Much needed rain caused ash, left over from wildfires, to run into the river, creating conditions that were stressful to fish. “You kind of get right at the limit there of what these native fish can handle.”

Yet it isn’t only endangered mussels and fish that are of concern. Land-dwelling creatures have also seen their share of challenges.

“The other thing we’ve had is blue tongue; it affects white tailed deer,” says George, commenting on the deer deaths that have been seen along the Platte River. “The deer bleed to death internally, but they get incredibly thirsty.”

The deer end up concentrating in one location due to fewer water sources, allowing an easier transfer of the disease.

“One lady called and told me a deer charged into the river and drowned itself,” says George. “That’s what blue tongue will do to these poor animals.”

The spread of disease is a huge concern in times of drought. In the Horicon Marsh in Wisconsin, thousands of fish have died due to botulism. Left stranded on the shores of the marsh, these fish are then eaten by waterfowl and shorebirds, which congregate in a smaller area due to drought conditions. By eating the fish, the birds are infected by the disease and often die. In an attempt to curtail a larger outbreak of the disease, the Department of Natural Resources is collecting any dead fish that they find and removing them from the system.

Although drought conditions are bad now, George remembers that tougher times might still be coming. “We still have the hottest time of the year ahead of us,” he says.