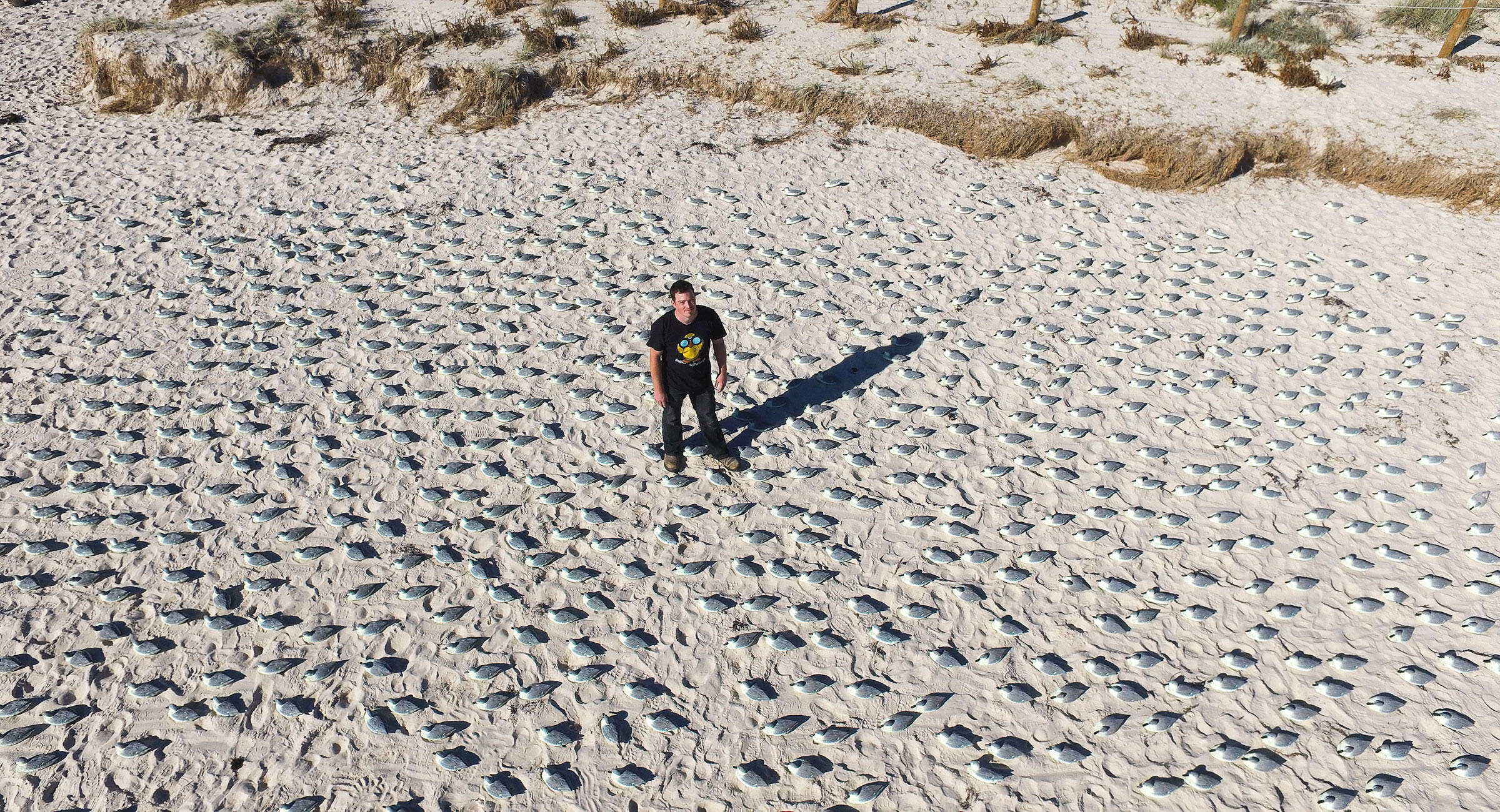 Ecologists Bested by Drone in a Competition to Count Birds

A novel experiment pitted a drone against experienced wildlife spotters to estimate the size of faux flocks. Despite the results, some ornithologists are wary of the new technology.

Two-thousand rubber duckies would make for a pretty epic bath. Or in this case, a first-of-its-kind science experiment. Ecologist Jarrod Hodgson used thousands of rubber duck decoys in a new competitive experiment that matched experienced ecologists against a drone to see which counts wildlife more accurately.

Hodgson wasn’t merely entertaining himself, though he admits the experiment was great fun. Instead, he was dead set on answering a question central to modern conservation: How can scientists best estimate the size of wild animal populations? This information is critical; indeed, scientists use population estimates to decide whether a species is in trouble—including listing it as “threatened” or “endangered”—and, ultimately, whether it needs urgent attention and funding to bring its kind back from the brink.

While it might be simple in theory, in practice counting a large troop of animals is a serious challenge. “People working in conservation are constantly struggling to come up with population figures,” says Kenn Kaufman, a renowned bird expert and field editor at Audubon. Ecologists in the field will typically try to find a good vantage point from which to observe a flock, and then use rudimentary technologies—binoculars, spotting scopes, and hand-held tally counters—to estimate its size.

It’s often easier to get an accurate count from an airplane, sometimes with the help of aerial photos, but this approach costs time and money, says Andrew Pierson, director of conservation at the Iain Nicolson Audubon Center at Rowe Sanctuary in Nebraska. During migration, the center's conservation partners on the Platte River estimate how many Sandhill Cranes travel through the area—and it isn’t easy. “It takes a pilot, hiring a plane, a staffer or two to do the count, and another staffer to sit in the office and analyze the results,” he says. And some ecologists worry that the loud plane engines disturb the wildlife they’re aiming to assess and protect.

In comparison, remotely piloted aircrafts, or drones, seem to strike a middle ground. Airborne, they can get a better view than a terrestrial observer. They can capture photos for analysis after researchers have left the field. And unlike airplanes, drones are relatively small and quiet, reducing the risk of spooking the birds.

As a result, “there’s been an increasing use of drones among ecologists and environmental managers,” Hodgson says. “The proliferation has been phenomenal.” (The Federal Aviation Administration estimates that the commercial drone fleet will increase tenfold in the U.S. between 2016 and 2021). Drones have have been used to monitor orangutans in Indonesia, elephants in Burkina Faso, and, increasingly, they’ve been used to count birds.

But are drones really superior to traditional observers? “There’s a growing idea that they are better,” Hodgson says, but “there isn’t much actual statistical evidence.”

Like the proctor of a bubblegum-counting contest, Hodgson knew the true size of each colony—and then he put two teams head-to-head to compete for the most accurate count.

So he decided to put drones to the test. In 2016, Hodgson, a PhD candidate at the University of Adelaide, arranged 2,000 rubber ducks into 10 colonies on a public beach in South Australia in a nesting pattern modeled after the Greater Crested Tern. Like the proctor of a bubblegum-counting contest, he knew the true size of each colony—and then he put two teams head-to-head to compete for the most accurate count. On one team were experienced wildlife spotters, equipped with binoculars or scopes, stationed about 120 feet away and at roughly the same altitude as the faux colonies. On the other was an off-the-shelf quadcopter, armed with a digital camera, and a handful of untried volunteers who reviewed each image manually, tallying the number of birds pictured.

When the results came in, Team Drone was the undisputed winner. On average across all colonies, the drone’s estimates were significantly closer to the true number of ducks than those made by ecologists; in some cases, they were 96 percent more accurate, depending on the drone’s flying height. And when the researchers discarded a subset of drone images that came out blurry, the lead was more pronounced: The drone counts were up to 98 percent (and no lower than 92 percent) more accurate than the human counts. The study was published earlier this week in Methods in Ecology and Evolution.

To cut down on time, Hodgson had another idea. “We wanted to see if we could automate the count and still be accurate.” The researchers devised an algorithm to process drone photos semi-automatically, and its accuracy was nearly identical to the manual analysis. 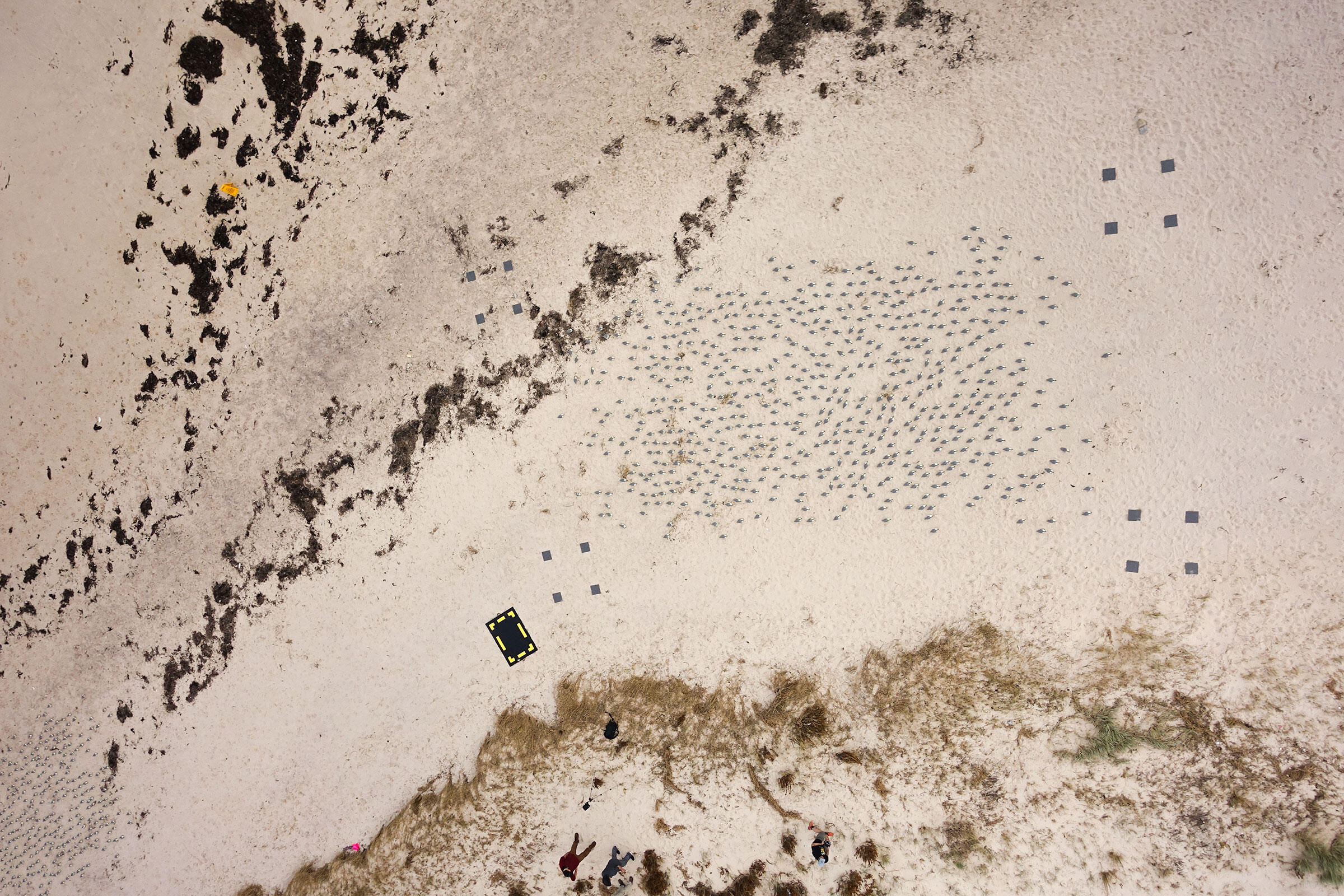 A drone's-eye view of one of Hodgson's decoy colonies, ready to be counted. Photo: Jarrod Hodgson

Even though the study's results were overwhelmingly in favor of drones, some ornithologists hesitate to embrace the new technology.

“It’s another form of recreation that might have an impact” on birds, says Larry Niles, a wildlife biologist who has been doing surveys for 40 years. “With anything like this, people will be using them all over, so now we have a new source of disturbance.” Pierson echoed his concern.

Hodgson is aware that disturbance is a risk. In fact, he published guidelines on how to fly drones to minimize disturbance to wildlife in 2016. But he himself acknowledges that there’s still a lot we don’t know. “There’s basically no published data on birds’ physiological responses,” he says. When a drone approaches a population of birds, for example, “they might just stick there and look fine” even if they’re experiencing stress responses. Currently, Hodgson is trying to quantify those responses by monitoring how the heart rate of birds changes when a drone is nearby. So far, he says, the data are inconclusive.

The ornithologists interviewed aren’t concerned only with the birds’ health, but also with that of the birding and scientific community. “Bird surveys should belong to people who love birds,” Niles says. He worries that eliminating people, including passionate volunteers, from surveys will reduce support for conservation measures. “We’re constantly trying to professionalize our survey when in fact we have legions of people willing to take part,” he says. “Whether or not we use drones, surveys should involve people.”

Concerns aside, none can deny that drones will have a place in conservation. “We’re seeing a shift in that direction,” Pierson says. “We have a small drone that we use for various things already.” The key is in how drones are used—“with the right application, [they] could be really effective,” Kaufman says—and whether they’re used responsibly. That’s why Hodgson’s work, including all those rubber ducks, is so necessary.