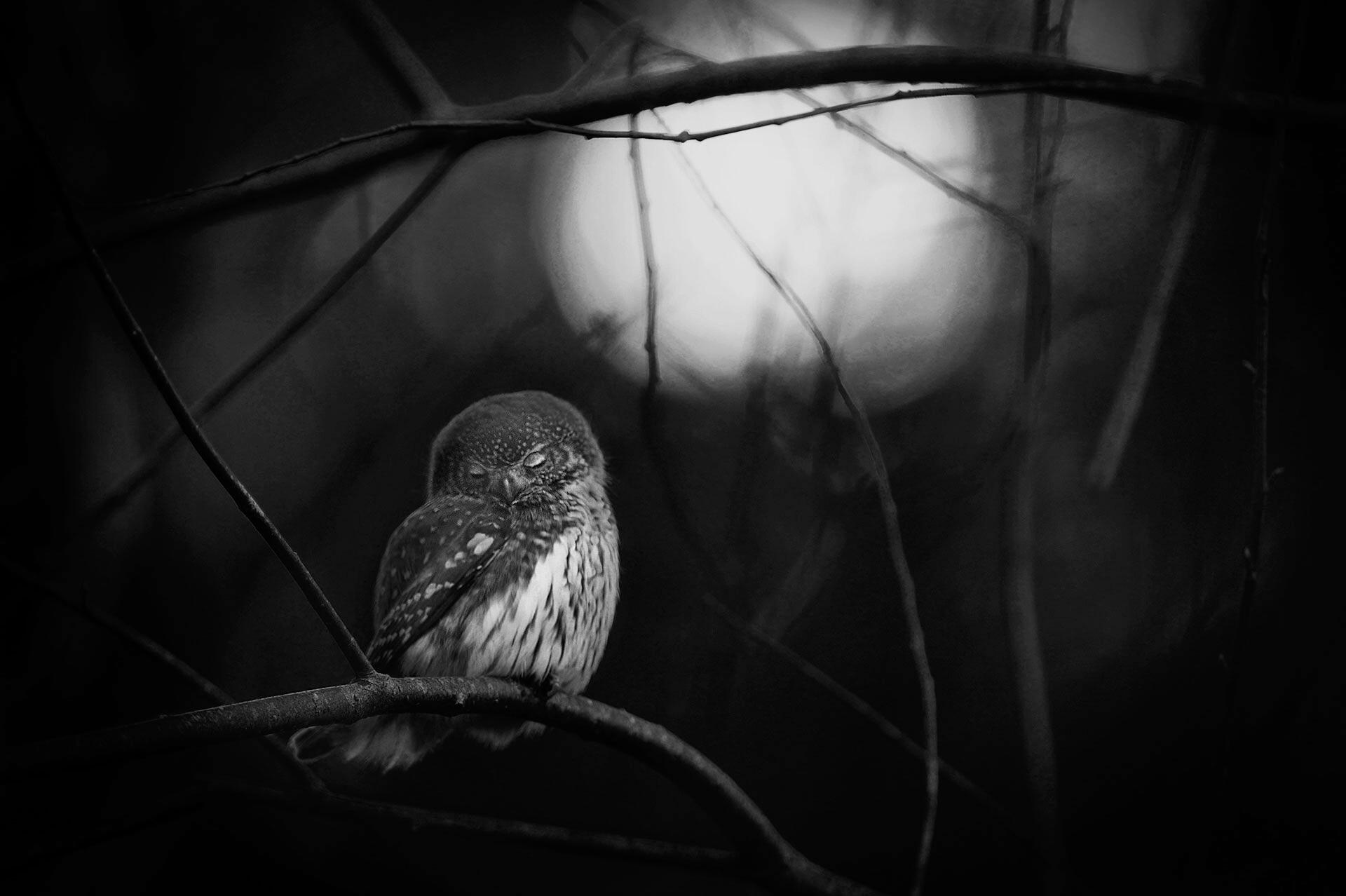 An owl in mourning, a parakeet in battle, and a mud-covered flamingo are among the winning images.

In 1965, a photograph of an owl clutching a songbird in its beak won CVR Dowdeswell the first-ever Wildlife Photographer of the Year Award, presented by a young David Attenborough. That year, only 500 photographers entered the contest, which the Natural History Museum in London, England has hosted since 1984. Fast forward to today when thousands of photographs, each displaying the beauty and fragility of the natural world, pour in from almost 100 countries to vie for the top prize: about $12,000 and the prestige that comes with winning one of the world's biggest wildlife media competitions.

This week, the museum announced the winners and finalists from this year's contest, with 13 different categories for adults and youth. Field biologist and photojournalist Tim Laman took home the grand prize with an image of an orangutan clinging to the trunk of a fig tree high above the forest canopy in Indonesia's Gunung Palung National Park. Laman told USA Today that while he's thrilled to see his work shared internationally, he's more motivated by the chance "to try and make a difference for orangutan conservation."

A gallery featuring about 100 of the top images opened at the museum today—a traveling exhibit will start touring internationally in 2017—with many of the masterpieces paying homage to birds. Scroll through our eleven picks for the best bird images, along with captions from the contest. And if you're a photographer, get ready: Next year's competition will accept entries from October 24 until December 15, 2016.

In the first light of dawn, photographer Mats Andersson used black and white to capture the melancholy moment following the death of this Eurasian Pygmy Owl’s partner. The pair had accompanied Andersson on his daily walks through the forest during the early spring. “The owl’s resting posture reflected my sadness for its lost companion,” he says. Andersson's image of the solitary owl, framed within the bare branches and lit by the first light of dawn, was the winner in the Black and White category of the competition.

Not long after, he found this owl dead, too, and suspects that the pair may have been killed by one of the larger owls in the forest—not for food but because, in the breeding season, it didn’t tolerate other birds of prey in its territory.

This Rose-ringed Parakeet was not happy. It had returned to its nesting hole high up in a tree in India’s Keoladeo National Park to find that a Bengal monitor lizard had taken up residence. The bird immediately set about trying to evict the squatter: It bit the lizard's tail, hanging on for a couple of seconds at a time, until it retreated into the hole, and would harass it when it tried to come out to bask. This went on for two days, giving photographer Ganesh Shankar time to capture this shot, winner of the Birds category. Eventually, the parakeets gave up and left, presumably to find another place to rear their young. 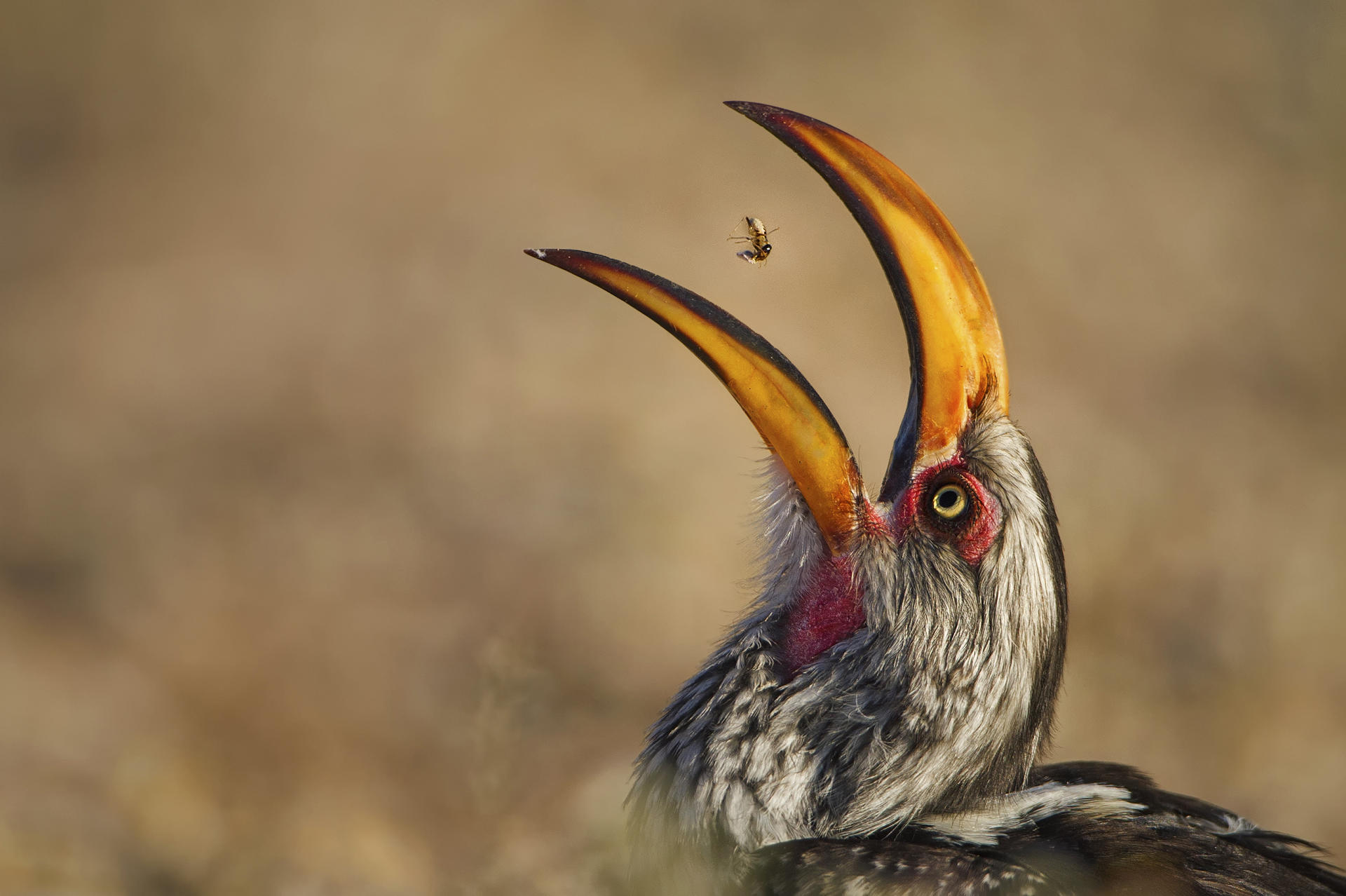 Using the tip of its massive beak like forceps, this Southern Yellow-billed Hornbill flicked termite after termite into the air and then caught and swallowed them. Foraging beside a track in South Africa’s semi-arid Kgalagadi Transfrontier Park, the hornbill was so deeply absorbed in termite snacking that it gradually worked its way within 20 feet of the vehicle where doctor and photographer Willem Kruger sat watching with his camera. This shot was a finalist in the Birds category of the competition.

The bird feeds this way because its tongue isn’t long enough to pick up insects like a woodpecker might. Though its huge bill restricts its field of vision, it can still see the bill’s tip and can pick up insects with precision this way. 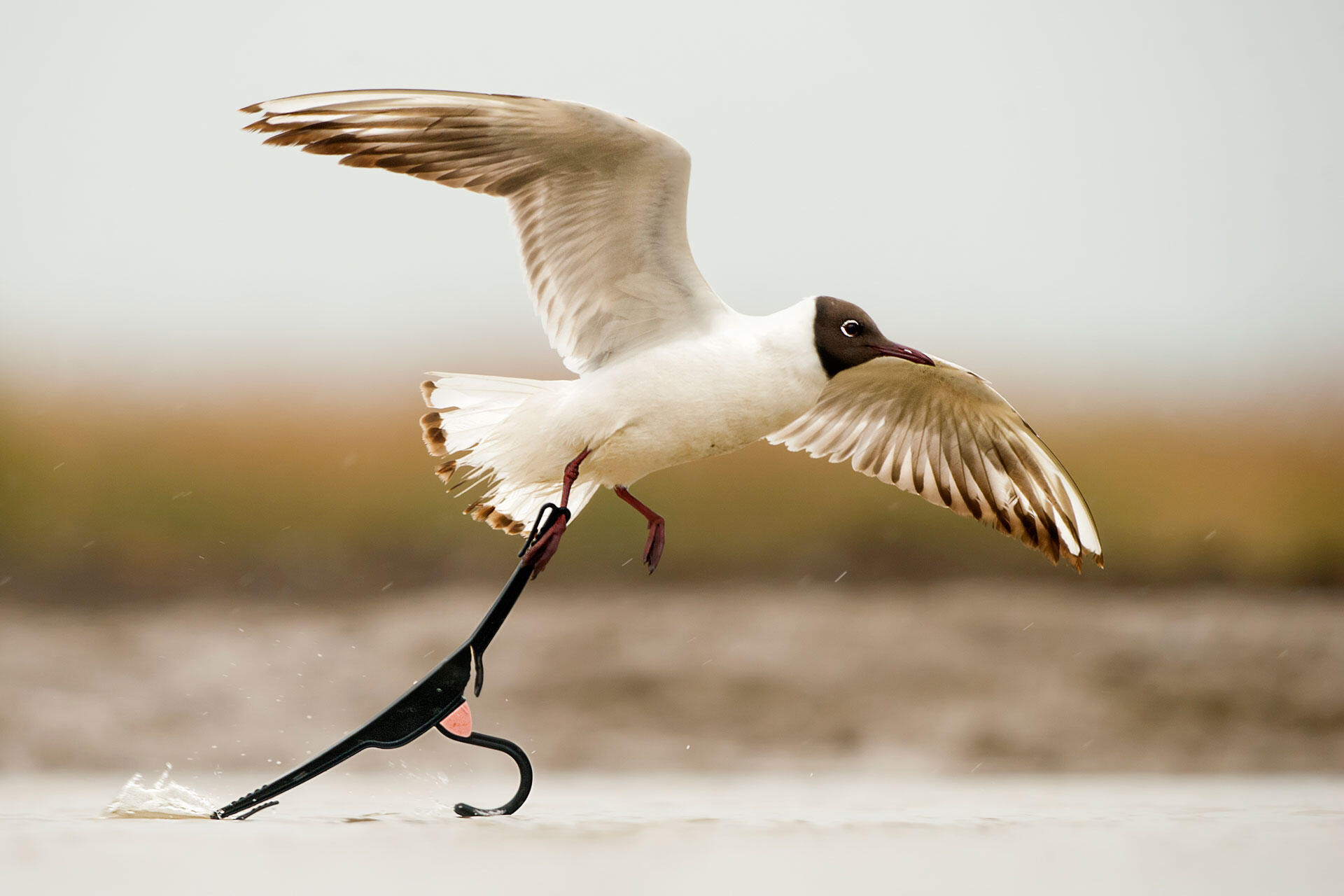 When he first saw this Black-headed Gull, bird photographer Bence Máté thought it was carrying a long reedy plant. It was, after all, the breeding season in Kiskunság National Park, a biosphere reserve in Hungary, home to tens of thousands of migratory birds. Máté was so busy concentrating on adjusting the composition and focus that he failed to notice what the piece of “reed” really was.

It wasn’t until he was checking through his images later that he saw that the gull’s foot was trapped in a plastic clothes hanger. “The gulls feed at rubbish dumps outside the national park. I often saw them entangled in bits of rubbish,” he says. “But mainly they get caught up in fishing line and hooks discarded around the lakes. I saw this poor bird flying around in the area for two more days before it disappeared.” His image was a finalist in the Single Image category of the competition.

The Shetland island of Unst is famous for its diverse colonies of breeding seabirds, with kittiwakes, Razorbills, skuas, shags, Black Guillemots, puffins, Northern Fulmars, and gannets. But it was also the light and the landscape that attracted photographer Guillaume Bily to the area.

On this day, a great bank of fog hung over the sea, partially obscuring the sun. “The reflection of the sun on the water was the only focal point in that blue immensity,” Bily says, until a single gannet flew ghost-like into the frame. He had seen the same light effect a few days before; this time, Bily ran to the cliff’s edge when he saw the light change to capture this shot, a finalist in the competition’s Birds category. 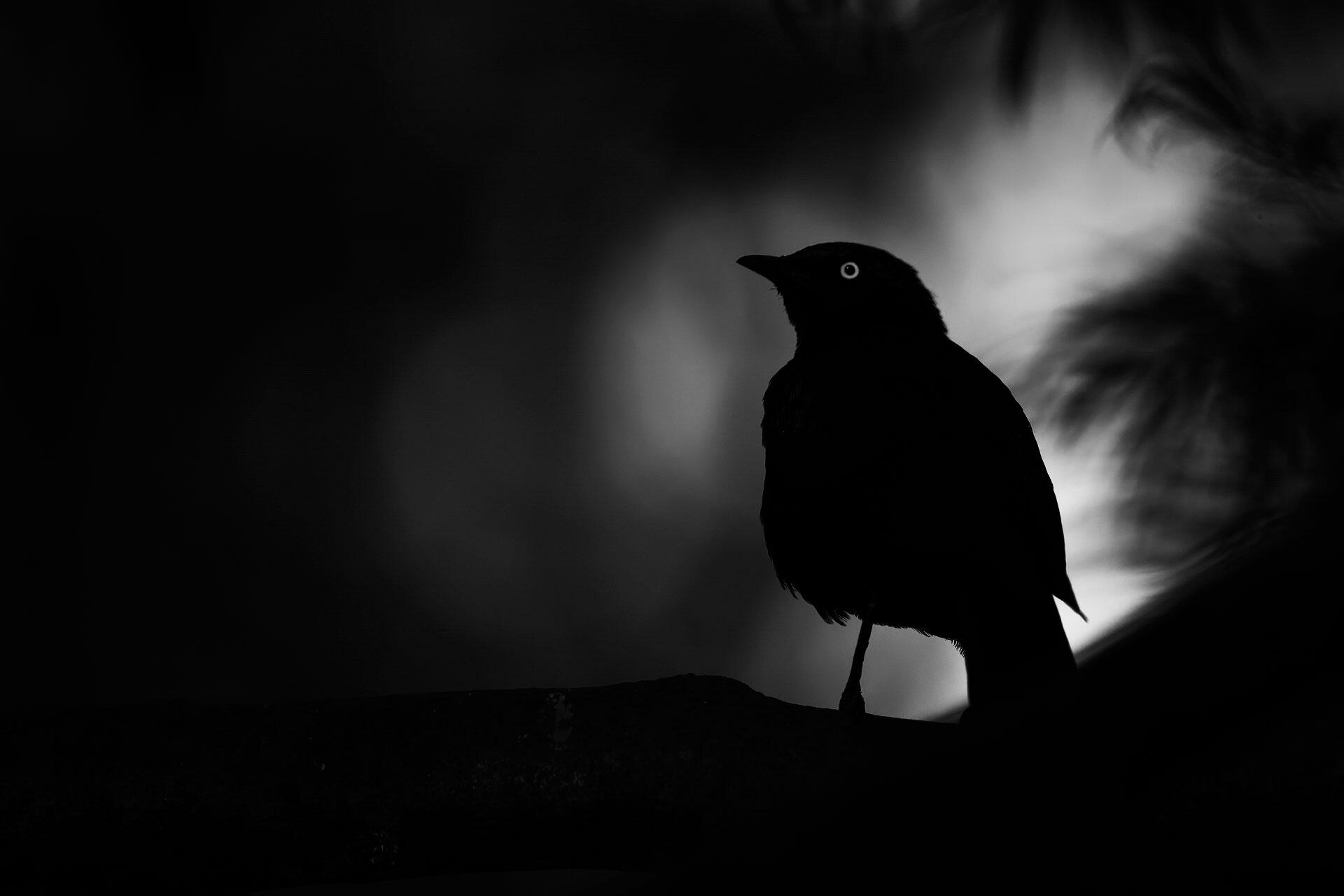 The sun was setting over Ethiopia’s Lake Awasa as Lesser Blue-eared Starlings returned to roost. Before they settled in the trees for the night, a few crouched on a small, sandy slope with their wings open, absorbing the sun’s last rays.

The birds, common in many areas of Africa, embellished the lakeside with their iridescent colors, but it was their bright yellow eyes that struck wildlife photographer Nicola Di Sario. While the birds were absorbed in their rituals, he took advantage of the water behind the trees that was reflecting the fading light. Framing an individual against this backdrop, he captured the shadowy atmosphere, letting the bird’s eye stand out in the darkness. This photo was a finalist in the Black and White category of the competition. 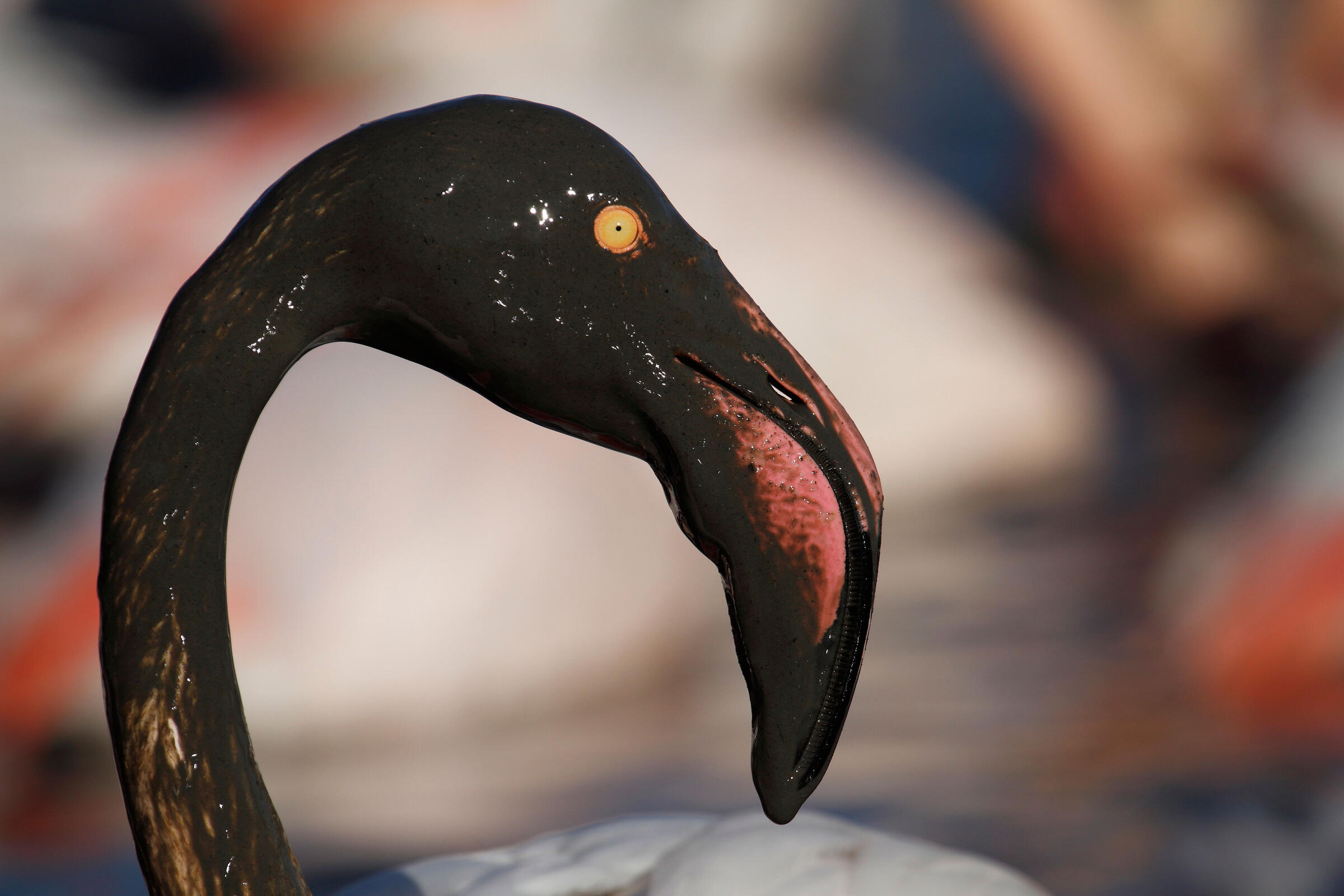 The Greater Flamingo lifted its head from feeding to take a breath and posed for a moment, its head and neck lacquered in thick, rich mud. It then put its head upside down again and walked on, swinging it from side to side, pumping water through the comb-like plates in its beak to filter out tiny morsels including insect larvae, worms and brine shrimps.

Laurent Chagnard watched from behind reeds at the edge of a small lagoon in the French Camargue. This huge delta, with its briny lagoons, lakes, and marshes, attracts more than 350 bird species and boasts the most important Mediterranean colony of Greater Flamingos—around 10,000 pairs. Chagnard’s photo, the first he’s entered into a competition, was a finalist in the Birds category. 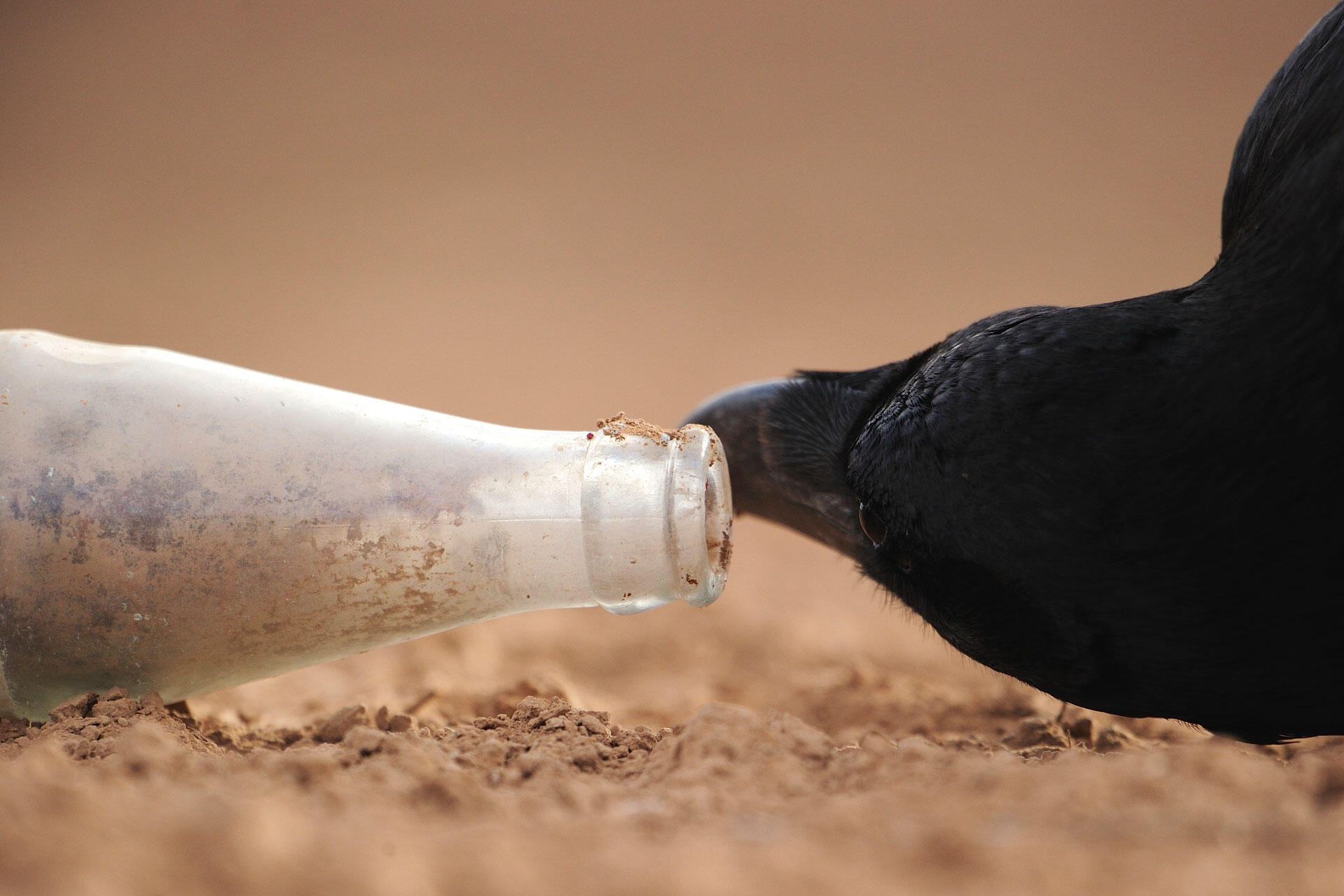 Photographer José Juan Hernández Martínez got into position before dawn, his lens trained along the ground from a hide that he had partially buried in a field in Fuerteventura in the Canary Islands. Ravens flew overhead and they couldn’t resist stopping off at the field to peek inside the glass bottles tossed there by passersby. These bottles are death traps for creatures such as lizards and shrews, offering carrion for ravens.

“They would peer into the bottle openings, then pick them up, placing them in different positions—even upright—to inspect the contents” for a tasty morsel worth extracting with their bills, Hernández Martínez says. He spent several days in the hide to capture this image, a finalist in the Birds category, which he says sums up a raven’s curious and clever character. 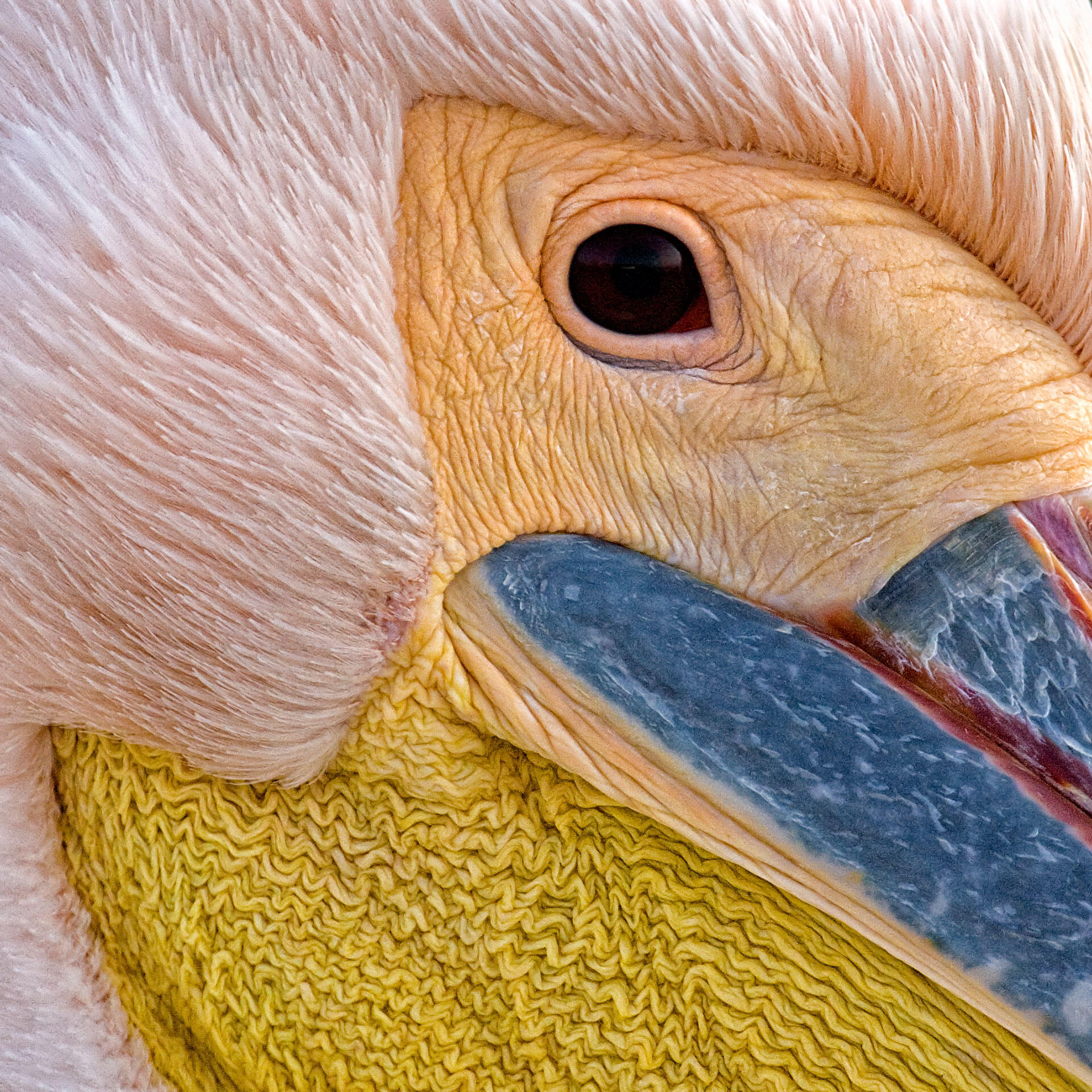 Bird photographer Bence Máté spent 48 hours in his hide on an island in the Romanian region of the Danube Delta to capture this shot, which was a finalist in the Details category of the competition. He had built the hide in winter, before the arrival of the Great White Pelicans; the largest breeding colony outside Africa, the delta hosts more than 2,500 pairs of the birds.

Bence’s hide was fronted with a one-way mirror overlooking the mudflats, which 20 or more pelicans would cross to feed in the delta. "They came so close that I could make out the tiniest details,” Máté says. Here he framed the face of a female, her orange-tinted skin and the yellow folds of her pouch contrasting with her blue beak. 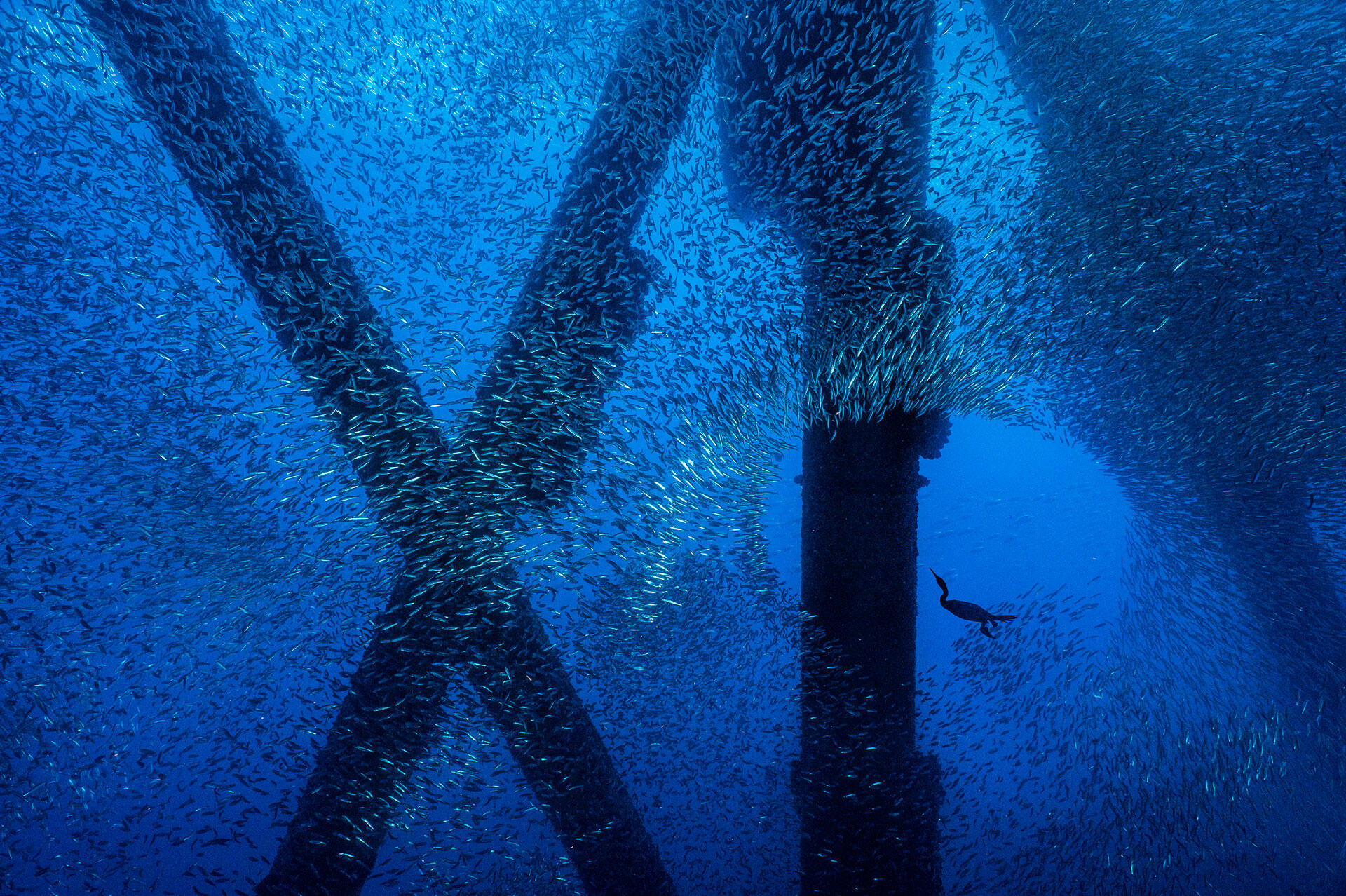 The irony wasn’t lost on wildlife photographer Alex Mustard: drilling for oil is not generally beneficial for wildlife. Yet rigs offer shelter for fishes—and serve as hunting grounds for their predators. The Eureka Oil Rig off Long Beach, California is a favorite spot for local Brandt’s Cormorants, with both a ready supply of fish and an above-water structure for roosting and wing-drying.

The rig also allows divers to explore underneath. Mustard set out to capture a cormorant on the hunt. But the birds hid themselves behind the rig’s legs, and the swell and the current changed constantly. So it took many attempts to catch this moment, when a cormorant swept through a shoal of Pacific chub mackerel, silhouetted against the blue. Mustard's photo was a finalist in the Birds category of the competition. 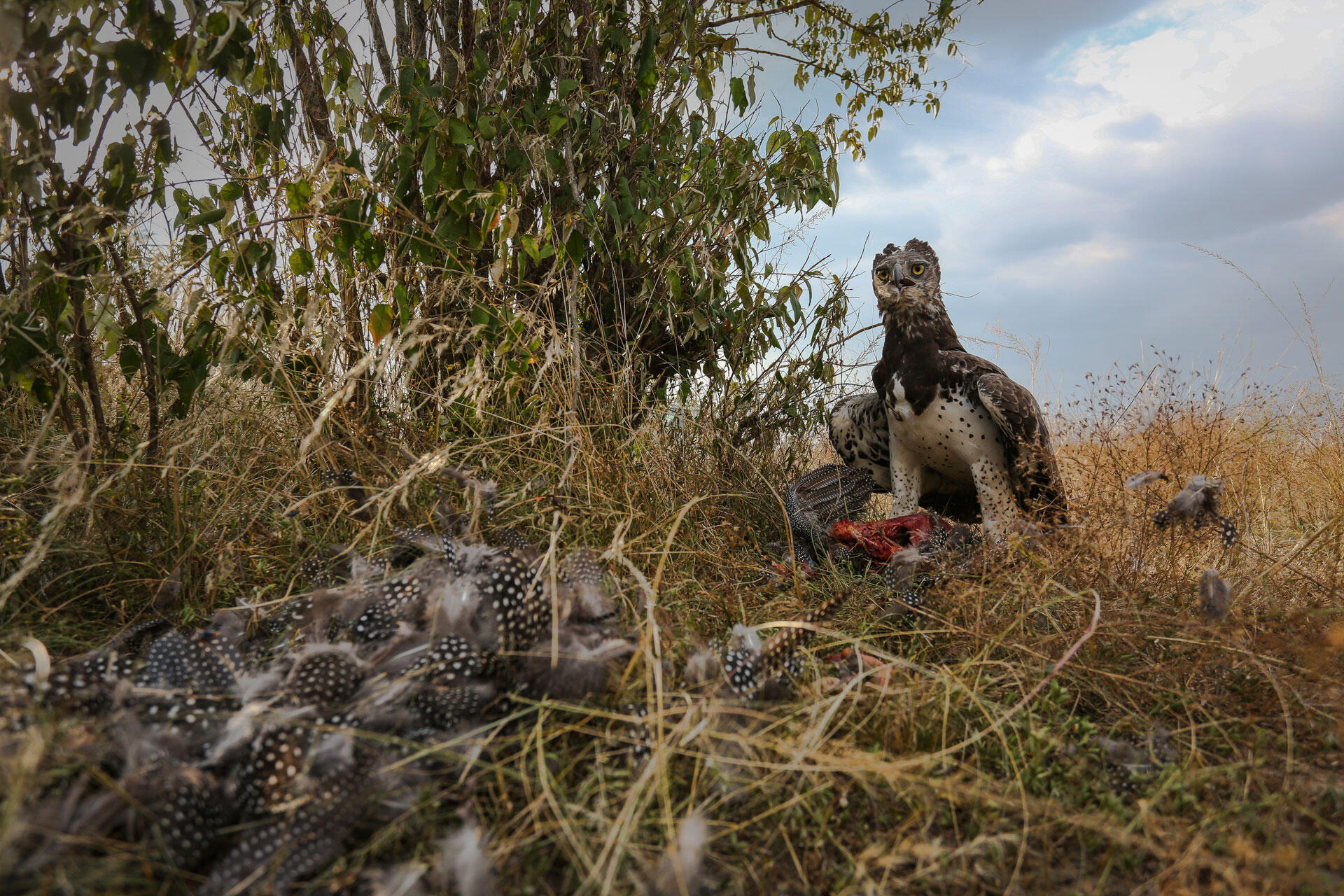 The polka-dot feathers strewn across the ground immediately identified the victim: a guinea fowl, a common bird in Kenya’s Maasai Mara National Reserve. Tourists had scared away the killer, a Martial Eagle, but wildlife photographer Saud Alenezi knew that the eagle was likely to return to its food.

It's forbidden to get out of your vehicle in the reserve because of lions. So Alenezi strapped his camera to a robotic car to get close to the carcass without scaring off the predator. His gamble paid off: Toward the end of the day, the Martial Eagle flew back to claim its prize and looked straight at the camera to let Alenezi capture this shot, a finalist in the competition's Birds category.