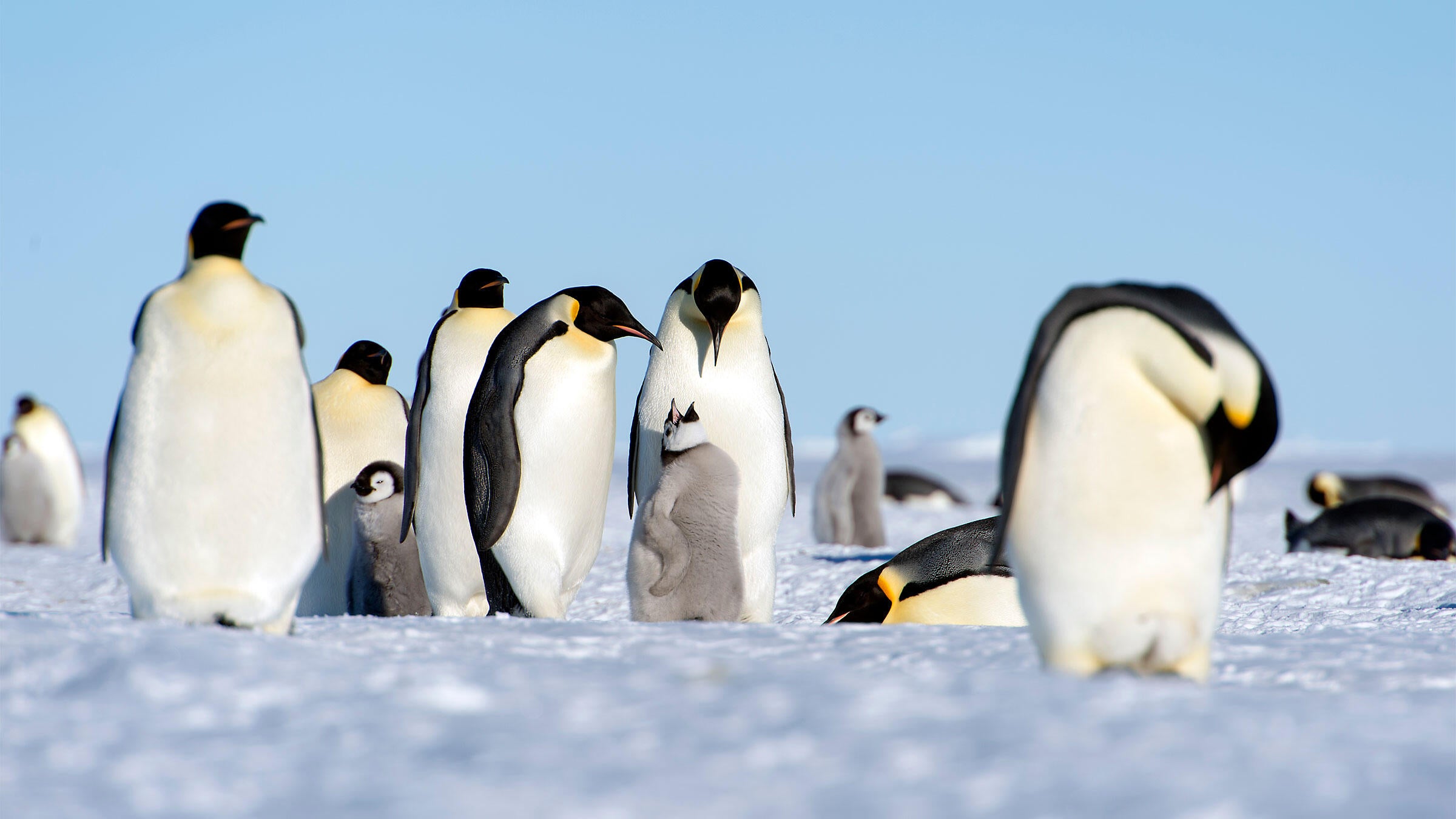 The Antarctic seabirds may qualify as a ‘threatened’ species due to climate change. But without reducing carbon emissions, can the listing help them?

Today the U.S. Fish and Wildlife Service (FWS) published a proposal to list Emperor Penguins as threatened under the Endangered Species Act (ESA). The birds face steadily mounting risk from climate change, the proposal says, and they will need political protection in order to survive the century.

If the proposal is finalized, the Emperor Penguin would join a small cadre of species, including polar bears and bearded seals, protected under the ESA explicitly because of climate change. “Climate change, specifically melting sea ice, is the primary threat to the species,” FWS spokesperson Christina Meister wrote in an emailed statement to Audubon.

An ESA listing typically includes a plan to preserve the species. However, since penguins live in Antarctica, the U.S. government doesn’t have direct authority to protect their habitat. Even if it could, the effort would likely be ineffective: The only way to protect Emperor Penguin habitat is to prevent sea ice from melting. While the FWS proposal acknowledges the danger posed by climate change, it doesn’t actionably address the core cause of the birds’ plight—carbon emissions from burning fossil fuels, which trap heat in the atmosphere and raise global temperatures.

Meister, the agency spokesperson, places the responsibility to reduce those emissions on other government officials. “The decisions made by policymakers today and during the next few decades will determine the fate of the Emperor Penguin,” she wrote. “The proposed listing helps bring attention to the plight of the species and to the importance of low-emission climate scenarios, which if adhered to predict only gradual declines in Emperor Penguin breeding pairs and enough colonies to likely ensure the species’ survival in the wild.”

Still, the listing would set a “great precedent” in the fight against climate change, says Phil Trathan, a penguin researcher with the British Antarctic Survey. He hopes that an ESA listing for the Emperor Penguin will incentivize governments across the world to take climate action—or at the very least, increase general awareness of climate change. Daniel Zitterbart, an applied ecologist at Woods Hole Oceanographic Institution, says that the listing could also benefit other Antarctic species by encouraging government agencies to create more marine protected areas. "It's the old ‘umbrella species’ concept," he says, "If we can protect this one species, we will protect way more."

The FWS will accept public comments until October 3, then will process and incorporate those comments to publish a verdict on the penguins’ conservation status within the year.

Emperor Penguin numbers are currently robust: The global population, entirely based in Antarctica, is estimated at 270,000 to 280,000 breeding pairs. The penguins breed between April and December on sea ice fastened to the coastline. There are currently 61 known breeding colonies ringing the continent.

However, experts predict that the species could decline by 26 to 47 percent over the next three decades due to climate change-driven instability in Antarctic ice. Research shows that sea ice distribution has become increasingly unpredictable over the last 40 years due to warming waters and glacial calving. If there is too little ice, the chicks fall into the water and drown, but if there is too much, the parents’ fishing trips may take too long, causing the chicks to starve.

Trathan conducted and reviewed some of the research himself. “This is probably the most robust science modeling that has been undertaken for a species threatened by climate change,” he says. According to these models, 81 percent of Emperor Penguin colonies could be saved by keeping global warming at or below the Paris Accord's 1.5 degree Celsius goal. However, a global temperature increase of 3 degrees would spell disaster for the birds. At the current rate of emissions, climate models predict 90 percent of Emperor Penguins will disappear by 2100.

The proposed listing doesn’t attempt to use the ESA as a lever to drive climate policy that would reduce carbon emissions. Instead, it comes with a 4(d) rule, which allows the service to prohibit specific activities that could negatively impact the birds’ survival. So far, the FWS has only directly prohibited poaching of Emperor Penguins. But it has the potential to do more, according to Brendan Cummings, an attorney and conservation director with the non-profit Center for Biological Diversity, which petitioned the agency to consider listing the species. The FWS could use an article called section 7 of the ESA to block new fossil-fuel plants from opening, he says. "It's a very expansive, very powerful tool for protecting biodiversity.” So far, though, the service has declined to use the ESA to regulate fossil-fuel emissions for any species declining due to climate change, including the Emperor Penguin.

Without using that tool, the listing is more symbolic than effective. But symbols can be powerful, Trathan says, especially if the penguins’ journey parallels that of another charismatic, cold-loving species: the polar bear. Since its historic ESA listing in 2013 cited climate change, the polar bear has become both an icon of desolate Arctic beauty and a potent reminder of the need for human accountability. “It would be beneficial if the Emperor Penguin became that same icon for the Antarctic,” Trathan says.

If that were to happen, the penguin could potentially rally diplomacy towards climate action. Properly upheld, Trathan says, the listing could incentivize countries involved in the Antarctic Treaty System and the United Nations Framework Convention on Climate Change—including the United States, United Kingdom, Russia, and China—to meet their 2050 decarbonization goals. Zitterbart agrees. “In the end,” he says, “it allows for more political pressure.”

Ultimately, though, political pressure is only useful if it is acted upon. “The ESA has been and remains our most powerful wildlife law for preventing extinction,” says Cummings. "What's lacking is not the law, not the legal toolbox, but the political will."