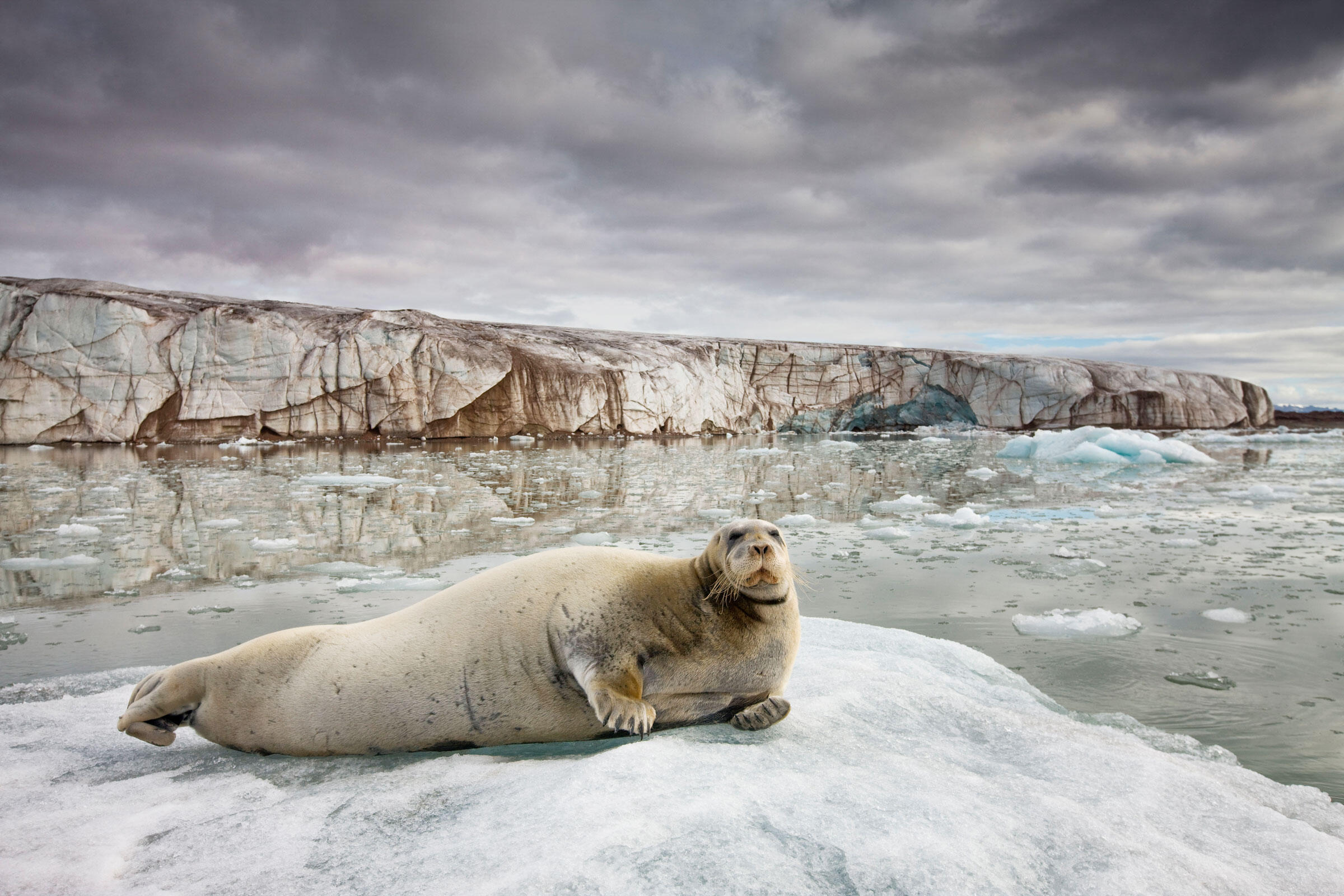 Despite healthy populations today, bearded seals have protection under the Endangered Species Act because of the future threat of climate change. Photo: WorldFoto/Alamy

A federal court has ruled that two bearded seal populations are threatened—not because they're in decline, but because their habitat is disappearing.

Currently, bearded seals in the Arctic are chasing the edge of the region’s sea ice south as it refreezes after a long summer’s melt. They must be happy to see its return, as the animals—the largest of the Arctic’s ice seals—depend on that ice for survival. In between bouts of diving to the seafloor, where they scrounge for squid, fish, and clams in the mud with heavy beards of whiskers, they rest on the ice edge. In the spring, seal mothers give birth to pups and nurse them on the ice. And when the pups grow older, doting parents teach them how to dive below the ice edge to escape predators like polar bears and walruses.

Although the sea ice they rely on continues to shrink each summer, bearded seals have enough to survive—for now. But according to climate models, in the near future, ice will decline significantly in the seals’ habitat in the Bering and Okhotsk Seas. By 2100, less than a quarter of current ice will freeze during their breeding season; sooner, by 2050, only 15 percent of current ice cover will exist when the seals haul themselves onto the ice to molt each summer.

Based on these models of future ice cover, in 2012 the National Oceanic and Atmospheric Administration (NOAA) listed the Bering Sea and Okhotsk Sea populations of bearded seals as “threatened” under the Endangered Species Act. A threatened species is one that is likely to become endangered “within the foreseeable future throughout all or a significant portion of its range.”

But because the current bearded seal population is healthy and the loss of ice hasn’t actually occurred yet, the state of Alaska, oil company groups, and Alaskan native groups cried foul and sued NOAA over the listing. In court, they argued that the seal population was fine and the climate models were unreliable, and therefore the agency listing decision was “arbitrary and capricious.” In 2014, the U.S. District Court for Alaska agreed with the challengers and vacated the listing, writing that the models’ predictions of future ice habitat were “too speculative and remote to support a determination that the bearded seal is in danger of becoming extinct.”

Last month, a panel of three judges at the Ninth Circuit Federal Court of Appeals reversed that decision and decided that the bearded seal should be listed as a threatened species. In doing so, they validated the use of climate models to project future habitat loss and to list species based on those findings. “The Service need not wait until a species’ habitat is destroyed to determine that habitat loss may facilitate extinction,” wrote Judge Richard Paez in the court’s decision.

Many scientists and environmentalists celebrated the decision not only for the federal protections for bearded seals, but also for the precedent it sets for other climate-threatened species. “This court case is a gamechanger because it allows listing of species as threatened or endangered based on climate models that forecast what future conditions are going to be like for species down the road, in fact considerably down the road,” says marine scientist Jane Lubchenco, who was NOAA’s administrator when the seals were listed.

“This is new ground that is being broken for the Endangered Species Act,” says Susan Culliney, policy associate with Audubon Alaska. When making listing decisions, authorities have always been tasked with considering threats “in the foreseeable future,” as laid out in the act. “But in the past listings have been more about the immediacy of the problem,” she says. “Climate change is sort of unique in that way, that we can see it coming.”

Bearded seals aren’t the first species to be listed based on the climate threat. More than 20 climate-threatened coral species are listed as threatened, and in 2008 the polar bear was listed as threatened based on sea ice models. The addition of the bearded seals bolsters the case for listing climate-threatened species before they begin population decline, Lubchenco says. “The fact that the polar bear has now been joined by ice seals and a number of coral species underscores the urgency of addressing climate change and the very real tangible threats that climate change poses to species,” she says. It could also support protection for other Arctic ice-dependent species, like the Ivory Gull and Ross's Gull, under the Endangered Species Act.

This doesn’t mean that courts will automatically accept any and all climate models as evidence. In fact, sea ice models may be a special case. For one, there’s no disputing the fact that Arctic ice is melting. “All parties agree that there will be sea ice melt; the only uncertainty is the magnitude of warming, the speed with which warming will take place, and the severity of its effect,” Paez wrote in the court’s decision.

There isn’t other ice farther north to which the animals could potentially migrate.

Additionally, for seals and polar bears, ice is their habitat; once it melts, they'd have to adapt drastically to a new environment. There isn’t other ice farther north to which the animals could potentially migrate.

“It’s sort of an easier pathway to walk because you either have ice or you don’t have ice,” Culliney says. “With other types of habitat, there would probably be more complicating factors.”

The only way to prevent the Arctic’s sea ice from melting is to reduce carbon emissions. And indeed, when the polar bear was listed in 2008, some environmental groups hoped that its protection could justify efforts to rein in greenhouse gas emissions and oil development. “With a listing and putting something on the ESA, the whole point is that you’re supposed to do something to get it off that list again,” Culliney says.

But the federal government decided that that was a step too far. “The agency wants to avoid getting caught up in the buzzsaw of climate policy,” says J.B. Ruhl, an expert in endangered species law at Vanderbilt Law School. If they list a species as “endangered,” “it automatically gets the full force of the law behind it” to prevent extinction, he says. But if a species is threatened, the agency has some wiggle room to write tailored rules about how to best recover the species.

“So that’s what the agency’s been doing: It’s listing these species as threatened and then crafting rules that don’t go too far,” Ruhl says. “Then they don’t have to get into the snarl of trying to regulate greenhouse gas emissions; that’s for someone else. But they do put everyone on notice that this species could require regulatory constraints on land use or whatever else if it gets worse.”

NOAA hasn’t yet developed a conservation plan for the bearded seals. Soon, the agency will designate critical habitat for the species and restrict harmful activities there, like shipping or oil exploration. (Alaskan native groups are allowed to harvest the seals for subsistence.) In the meantime, the clock will continue ticking and sea ice will continue to decline. Those extra protections may not be enough to save the seals from ice loss, but they could buy them some time while they wait for people to get their act together and reduce carbon emissions.