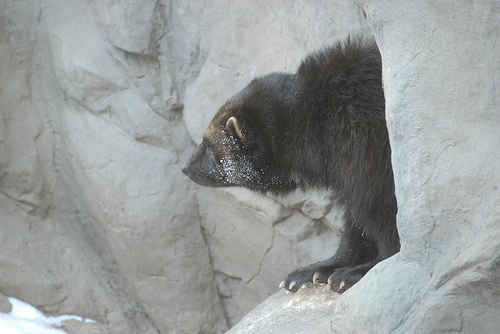 It’s as good a time as ever to think about endangered species. The Fish and Wildlife Service currently faces a backlog of several hundred - from moths to gophers, chickens, and fish – that are awaiting potential listing under the Endangered Species Act. Recently, the agency announced its plan to tackle this creature collective - just another piece of news on the endangered species front, where stories have abounded over the last few weeks. From the wolverine to the whooping crane, all kinds of furry and feathered creatures scampered across our radar. Here are some highlights:

Creatures that are being considered for listing.

The wolverine may have a reputation as a “flesh-ripping hellion” (a misconception OnEarth recently picked apart), but evidence that it has few defenses against climate change has spurred federal wildlife managers to propose listing the mammal as ‘threatened’ under the Endangered Species Act. An estimated 250 to 300 live in the United States. The Fish and Wildlife Service points out that North American wolverine populations were decimated by a history of hunting, poisoning, and trapping in the 1800s. While their numbers rose after some protections were put in place, climate change adds an additional threat. Mothers den in deep snow instead of tunneling underground, and are therefore dependent on thick, dense snowfall that coats the landscape until mid-May each year when the young are weaned. But climate modeling shows that wolverines will become increasingly restricted by shrinking patches of snow, as temperatures warm. The FWS will accept public comments until May 2013, and plans to make a decision by February next year. 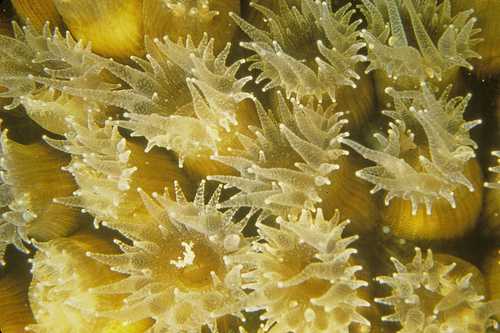 A cluster of boulder star coral. Photo by National Marine Sanctuaries / CC BY 2.0

Coral—the miniscule creatures that build their tiny castles in calcium-carbonate scaffolding on the seafloor—are next to take the limelight, as the NOAA holds public hearings on whether or not to protect a number of species in the Pacific and the Caribbean. The Boulder Star, Pillar Coral, Rough Cactus, and Elliptical Star are just a few of the 66 species that will be held up for listing as either threatened or endangered. The Center for Biological Diversity calls it the most sweeping move made in favor of reef life. Following a year of devastating news on coral reefs—from the Caribbean’s coral die-off, to the worrying state of the Great Barrier Reef—it does seem a good time to question the status of these ocean blooms. Until November 2013, when NOAA will make a decision based on public comments gathered from regions where the species exist, the status of these 66 coral species is up in the air. 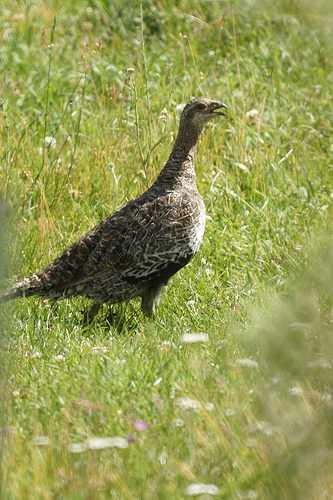 This bird – also called a lesser prairie ‘chicken’ – is at the center of a dispute that revolves around its current status. The International Union for the Conservation of Nature calls the bird vulnerable, and now, efforts are in place to get the Fish and Wildlife Service to list it as an endangered or threatened species. This week the agency will hold a final set of public hearings to help decide whether or not the bird should be listed, E&E News reports, but in the meantime, oil, gas, and wind companies are trying to dissuade the Service from doing so. If the grouse becomes protected under a ‘threatened’ banner, it will force companies to stop or change their operations in the reduced grassland areas where the grouse exists. The energy producers say their individual efforts to conserve the prairie grouse will be enough; conservationists say that those plans will be difficult to enforce, and could leave the bird exposed.

Some of the most interesting stories involve a bit of a tussle. Recently, birds have been at the center of the dramas playing out in the world of threatened and endangered species—probably less surprising when one considers bird advocates’ fervent passion for their feathered friends. 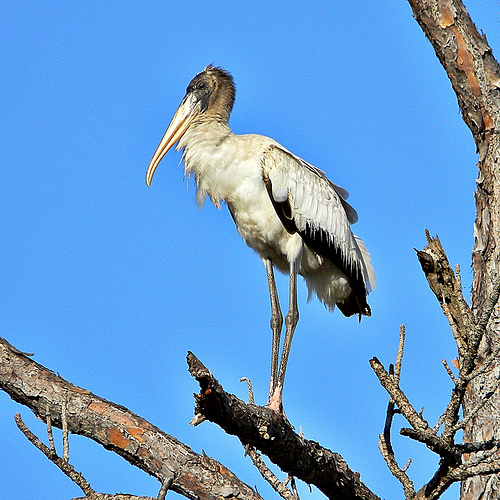 Should the wood stork—a bird said to be recovering well from its brush with extinction in the 1970s—be upgraded from an endangered species to a threatened one? That’s the peg in a debate around this leggy charmer. Wood storks were declared endangered in 1984, after years of wetland drainage and development around these areas threatened their key habitat. Since then, the number of mating pairs has risen from 5,000 mating pairs to 12,000 spread across Florida, Georgia, and South Carolina. But conservation groups—among them the Audubon Society—reckons that it’s too early to shift their status. The population at Audubon’s Corkscrew Swamp Sanctuary in the Western Everglades, Florida, has traditionally housed the largest nesting colony of wood storks, but in recent years, the birds have failed to nest there, Audubon says. These and other signs suggest that the bird should stay within its ‘endangered’ designation, conservationists say—even though the FWS promises that an upgrade wouldn’t remove any protections for the bird. 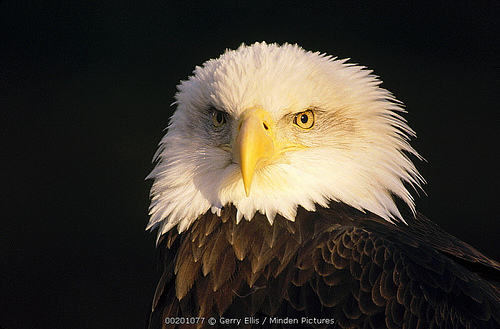 The golden eagle only has endangered status in some states, though it’s protected nationwide. The FWS is now focusing attention on the bird’s plight after a drawn-out disagreement over the impact of wind farms. Recently, they submitted to the White House a proposed policy that provides detailed guidelines for wind farm developers to avoid siting and building their farms in ways that could damage golden eagle habitat or cause more collisions. It also details how developers can acquire ‘take’ permits—allowances that let wind farms legally ‘kill’ eagles by accidental collision or invasion, if certain conservation measures are in place. The policy comes at the end of a long process that has left developers wary. Most see the guidelines as an unnecessary obstacle in the way of their farms, with few benefits for the golden eagle to make up for it, E&E News reports. 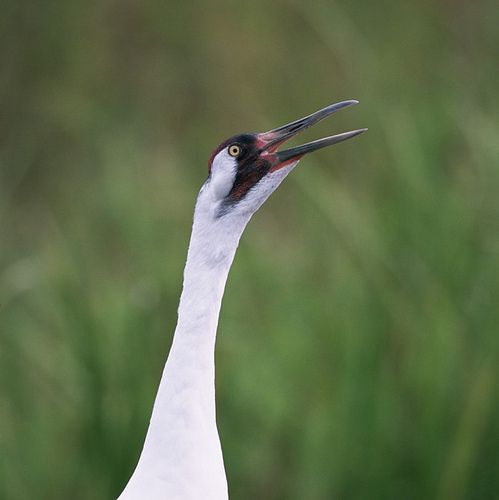 A whooper in action. Photo by USFWS Headquarters / CC BY 2.0

The whooping crane and piping plover are at the center of a similar debate, except the issues are flipped around. The American Bird Conservancy (ABC) reports that the Fish and Wildlife service is for the first time going to consider awarding take permits to wind farms for the endangered cranes and the threatened plovers, a move which it sees as dangerous since the birds could then be ‘legitimately’ killed. That’s a worrying prospect, they say, since there are only 400 whoopers left in the wild.

Bird conservation groups like Audubon and ABC don’t entirely oppose wind farms—the groups support those that use a science-based approach to ensure that the developments aren’t sited in critical habitat.

And here’s a smattering of good news from the endangered species front:

Next to nothing was known about the critically endangered hawksbill turtle’s capacity for reproduction, but now, researchers have found that the turtles are monogamous. The females keep a store of male sperm and use it to fertilize their eggs when the time is right, the team found. The discovery sheds light on how the species propagates itself—always useful knowledge for a population in distress. This comes in conjunction with the news that the numbers of hawksbill turtles are on the rise. 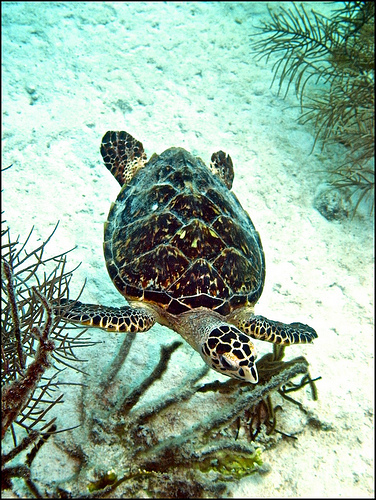 The island night lizard, found exclusively on the Channel Islands that lie just off southern California, has been doing well enough that the Fish and Wildlife Service want to take it off the endangered species list.

This year marks the 40th anniversary of the Endangered Species Act. The Act is heralded as the great protector of America’s wildlife, with its case-by-case analysis, its provisions for citizen action and critical habitat protection—something the wolverine might soon benefit from, for instance.

Finally, check out Klondike, the charming pup born from a frozen embryo—a first for the Western Hemisphere. He doesn’t know it but he’s given hope to endangered canids, by trialing the frozen embryo technique that could help boost threatened populations one day.