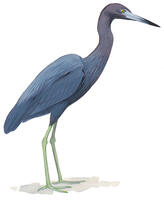 In 2008, the George W. Bush administration’s Environmental Protection Agency (EPA) vetoed a harmful drainage project in the Mississippi Delta known as the Yazoo Backwater Pumps. EPA cited the project would cause “unacceptable damage” to some of the nation’s “richest wetland and aquatic resources”. At the time, this was EPA’s 12th veto in the history of the Clean Water Act.

Authorized by Congress in 1941, the project drew broad opposition from wildlife organizations to conservative taxpayer groups, including 90 percent of public comments from Mississippians. In an unprecedented move, EPA has announced it is now reconsidering its 2008 veto.

Audubon Mississippi is deeply concerned about what this decision means for birds and wildlife as the project would drain and destroy 200,000 acres of wetlands in the heart of the Mississippi River Flyway. These ecologically rich habitats support over 250 species of birds, 20 percent of the country’s duck populations, and hundreds of species of fish and wildlife. Tens of thousands of acres in four National Wildlife Refuges and the Delta National Forest would be drained.

Although touted to provide flood control, this project was designed to drain wetlands to expand agricultural production on marginal farmland that regularly floods. The U.S. Army Corps of Engineers determined that 80 percent of the project’s benefits would be for agriculture. Fewer than 100 farms would benefit.

There is no guarantee the project can keep communities flood-free, nor is there evidence that the project would have minimized the area’s recent flooding. In fact, residential flooding in the backwater area is very limited because of other major water projects. Importantly, wetlands provide natural flood protection, and destroying them will make communities more vulnerable.

Audubon Mississippi is calling for cost-effective alternatives that are available now to benefit people’s lives and property. Several federally funded programs can immediately be deployed as win-win alternatives for homeowners, farmers, and the environment, specifically:

EPA has outlined a plan for the Lower Yazoo River Basin that incorporates these approaches. The initiative is a bargain at $20 million compared to the incredibly expensive Pumps that will cost taxpayers $440 million to build.