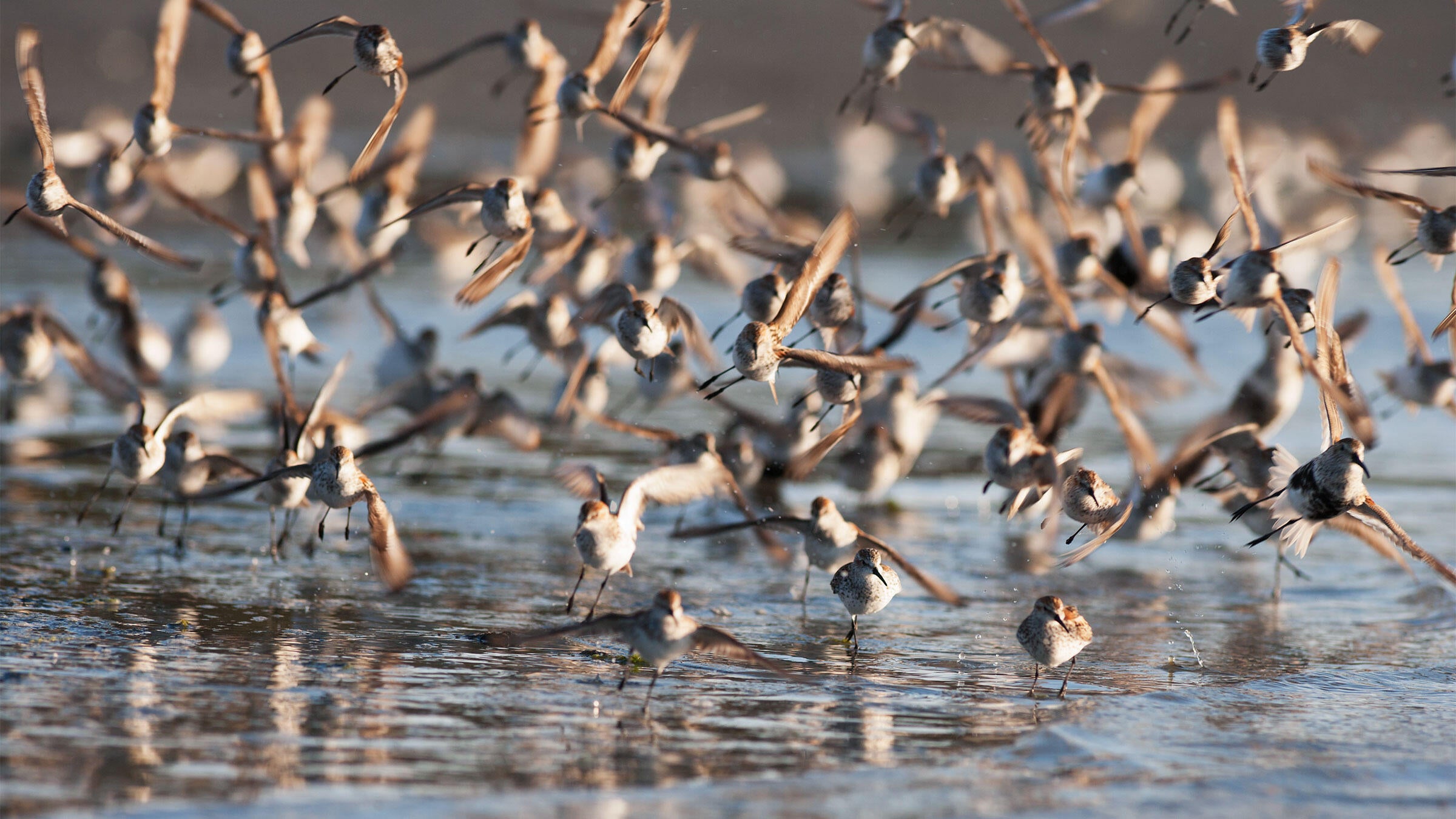 Western Sandpipers struggled to fly even after a small amount of oil touched their feathers, suggesting that the toll of oil spills on birds is larger than previously thought. Photo: Design Pics Inc/National Geographic Creative

Even a Little Bit of Oil Can Wreck a Bird's Ability to Fly, New Study Shows

Western Sandpipers with oil on less than one-fifth of their feathers have a tough time flying—a finding that underscores the dangers offshore drilling and spills pose on migratory birds.

In 2010, as British Petroleum's Macondo well gushed 210 million gallons of crude into the Gulf of Mexico, oil-slathered birds became symbols of environmental catastrophe. By the time the oil stopped flowing, the Deepwater Horizon disaster killed at least 50,000 birds, with some estimates putting the number as high as 1 million.

But even the highest estimates might not account for the spill’s full toll, according to new research. While birds drenched in oil made front pages—and accounted for most of the conservative mortality estimates—many others escaped with only a smudge of crude. The new study suggests that even a light oiling can take a serious toll on migratory birds, costing them valuable energy during flight and threatening their reproductive success.

“I think the overall message is that small amounts of oil are far worse than we imagined for birds,” says Karen Dean, an ecotoxicologist behind the new study published this month in the Journal of Experimental Biology.

Past research established that oil can poison birds that consume it while drinking water, preening, or eating contaminated food. More frequently, though, they're hurt or killed when oil mats their feathers and puts them at risk of hypothermia. When feathers can’t interlock properly, birds lose an important insulating layer that normally makes them buoyant and keeps cold seawater away from their skin. If they don't succumb to the cold, they often drown.

Until now, however, no studies had explored how oiled feathers might affect flight. It's an important question because mobility plays a crucial role in birds’ survival, influencing their ability to find food, escape predators, and migrate to their breeding grounds in time to reproduce. If a small amount of oil affects flight, scientists and governments may be underestimating the full impact of oil spills on bird populations.

To investigate this concern, the research team trained Western Sandpipers—among the 93 bird species killed in the Gulf oil spill—to fly in a wind tunnel at the University of Western Ontario’s Advanced Facility for Avian Research. At the beginning of the study, all the birds in the experiment flew easily for two hours. But the sandpipers struggled to fly after the researchers dabbed Deepwater Horizon oil onto their tails and wings, coating about one-fifth of their bodies. They burned 22 percent more energy during their wind-tunnel flights than the clean birds.

A week later, with more oil added to their backs and bellies, the sandpipers had an even rougher go in the tunnel, burning 45 percent more energy than oil-free birds. Only half of them managed to complete the two-hour flight.

"For a long-distance migrant like a Western Sandpiper, or for a tern that needs great agility in flight to catch its food, even slight oiling could be deadly, based on the results of this study."

“The results of the study strike me as very significant,” says Audubon field editor Kenn Kaufman, who was not involved in the research. Non-migratory birds that don't stray far from a food-rich area might be able to endure the impacts of a little oil exposure, Kaufman says. “But for a long-distance migrant like a Western Sandpiper, or for a tern that needs great agility in flight to catch its food, even slight oiling could be deadly, based on the results of this study. It's useful to know this to be able to measure the true impact of oil spills and try to deal with them.”

The findings arrive as the Trump administration aims to open more coastal waters to offshore drilling. In April the president signed an executive order encouraging drilling in the Arctic and the Atlantic Oceans, including the Gulf of Mexico. Trump also wants to allow oil drilling in the Arctic National Wildlife Refuge, an important breeding ground that’s home to more than 200 bird species, including the Western Sandpiper.

Migrating sandpipers keep a tight schedule as they periodically stop to refuel along the way to their breeding grounds in Alaska and eastern Siberia. Burning more energy—which translates to more fat—in flight means they’ll need to spend more time on each feeding break, says Ivan Maggini, the study’s lead author and bird-migration expert at the University of Veterinary Medicine Vienna. As a result, moderately oiled sandpipers could arrive at their breeding grounds as much as 45 days late, he estimates.

“It has been demonstrated that, especially for Arctic-breeding species, arriving late at the breeding grounds results in reduced reproductive success, or even in the complete failure of the breeding season,” Maggini says.

The study is one of several in a broader assessment of the Gulf spill’s ecological impacts funded by the U.S. Fish and Wildlife Service. A forthcoming special issue of the journal Ecotoxicology and Environmental Safety will highlight the studies, many of which are available online now. Some of the research explores the toxic effects of oil on birds. For instance, one paper shows that oil enlarges and weakens the hearts of Double-crested Cormorants, Dean says. Others add to concerns about how sub-lethal oiling impacts flight.

Dean, Maggini, and colleagues have another paper showing that light oiling slows Western Sandpipers down during takeoff, making them more vulnerable to predators. Dean also is a co-author of a study that found that slightly contaminated homing pigeons took significantly longer to return home than un-oiled birds.

Because the literature on how oiling affects flight is so new, scientists don’t yet understand what the combined impact might be on a bird that's struggling with both the physical and toxic effects of oil exposure, Dean says.

“We really don’t know how bad that could be,” she says. “This could be a huge problem for everyday life and migration for these birds."

Audubon is a nonprofit working to save birds and the places they need. To support our conservation efforts, make a donation today.