Excerpted from SAGE SPIRIT: THE AMERICAN WEST AT A CROSSROADS. Used with the permission of the author, Rick Bass. Published July 2015. Copyright © 2015 by  Rick Bass. All rights reserved.

Picture and prose: that’s what photographer Dave Showalter uses to illustrate the sagebrush ecosystem. In his latest conservation campaign, Showalter has banded together with Audubon Rockies and other wilderness groups to build a media campaign, trumpeting the uniqueness and importance of these dry, stunted shrubs, which cover 167 million acres of the frontier. As part of the project, Showalter has created Sage Spirit, which pairs his striking images of the steppe with words of wisdom from Rick Bass, David Sibley, and other eminent conservationists.

Here is Bass’ essay on why the sagebrush is so essential for the symbiosis of America, and why we must tend to it before it’s too late.

I live in Montana, over on the west side of the Continental Divide—the wet side, where in my green valley it’s been raining steadily, even as just a couple of valleys east, a quarter-million-acre wildfire howls, consuming houses and people, a world in tumult.

Two days ago a solitary Sandhill Crane flew croaking upriver. They’re rare, up here in the rain forest where I hide out, writing, reading, hiking. They come and go, from one stronghold to another.

I know where they come from. Like so many supremely crafted species, they are part of the landscape: stalking, probing, piercing the land with their long bills, sometimes inches deep, hunting, redistributing nutrients in their travels. That which they consume, they expend—nothing more, nothing less—and in their wake, they leave beauty and music.

There is nothing in nature that is not connected to everything else. But in our reaching ever deeper, we are changing the equation of the world for ourselves and all else. We are tipping.

The sandhills, improbably, remind me of the sea: not any ocean of today, but the old inland sea of several hundred million years ago. It’s still out there, just dry now—petrified, though not lifeless. Quite the contrary: covering eleven states and nearly 166 million acres (67 million hectares), the inland sagebrush sea is home to a hundred species of birds and all manners of other animals, which this book explores. Before I came to the center of this wet green place, I lived in Utah, in the center of the inland sagebrush. It’s where I first fell in love with the West—the most wonderful kind of awakening. Back then, I perceived myself to be in the center of something—wilderness—rather than at the edge, which seems a natural enough response when something as tiny as a human being finds him- or herself in any new environment, but particularly one as spacious as those of the American West. If you can’t see the edges, where else can you be but in the center?

After a while, however, a pilgrim becomes more acclimated to his or her surroundings: takes in the scent of things, hears and sees more, gets out and walks around, and comes to understand that on the blue planet, there are borders and boundaries to all things, and that as wild country becomes fragmented and ever smaller, there are ever more edges and ever fewer centers. Wild country becomes smaller. We’ve all witnessed it: another road, another parking lot, another pipeline, another pit, another hydraulic fracturing site, another ten thousand fracking sites—and the garden that we began with is defiled further.

Nonetheless, the garden’s inhabitants—ourselves included—still wander these smaller pockets, these places where the edges collapse inward upon what was once a greater—even vast—expanse of western space.

What stitching, then, might hold together these smaller pieces? The paths of the travelers themselves, perhaps—the weavings and careful wanderings of cranes, mule deer, humans, pronghorn, short-horned lizards, and the curious and specific lives of sage-grouse, masterful umbrellas for all the natural history that lies beneath their wings in a land where rain is scarce and where, even underground, there is a finite amount of water. If the country is still healthy enough to hold a sage-grouse, it is likely healthy enough to hold much else, maybe even everything else. The canary in the coal mine is the grouse in the sage.

What a beautiful paradox, that this eleven-state basin of sage-brush country possesses so little water, vital water, where once there was an entire sea’s worth. The water is long gone, but still remaining are the most pleasing shades of blue: blue of frost, feathery blue-green of sage, blue of nightfall, blue of turquoise, blue of hope.

The sweet, dry sea over which the sage-grouse presides—one of the most uniquely adapted creatures in this landscape of the petrified and desiccated old ocean—still teems, though what is fully at stake may not yet be entirely visible to us. As the margins of the big wild country needed by sage-grouse and so many other species contract, however, we are starting to get a clearer sense. There is still much to lose; there is still much to hold on to. It’s as if sometimes we can’t see what’s right in front of us or we assume that it’s our birthright and will be here forever, with no need on our part to tend to or caretake that treasure.

Is there time? I don’t know. I hope so. And I think this is an informed hope, not a false one. The photos and essays in this book comprise a spirit that is borne of the landscape Wallace Stegner called the geography of hope. Certainly, it is the landscape I am most familiar with, though this is not to say hope does not also have in it elements of pain and fear. In these warming days, so many vital landscapes exist at the precipice of loss or, beyond loss, extinction. It’s easy to become numb, fatigued. It’s easy to give up. It’s important not to. The condition of life demands our full effort in order to best honor it.

Why does this pale-blue dry sea matter? In my mind, there is no end to the reasons, but the language of defense can itself be dry: ecosystem services, ground water storage and filtration, species diversity and distribution, carbon sequestration, whatever.

What I find myself thinking about most often are two things: Does beauty still matter? And, are we truly a moral animal or only when it suits us to be so? It’s easy to give lip service to the rights of other beings, so long as that existence does not compromise the pace of our pell-mell rush to get to wherever it is we think we want or need to be, with our own hungry paths rushing across the crafted trails of ancient others.

We can see the edges of sagebrush loss—so many roads criss-crossing the desert, so much noise, so much dewatering now—like never before.

We need to hold on to whatever centers—large unbroken areas of sage—there still are.

I look at these photographs, I read these essays, and I remember the way the sage country smells and looks in first light. In many ways, the sharpness of senses felt there—the scent of the inland sagebrush sea, and particularly the way sounds such as crane grate, lek boom, raven call carry there, with all else silence: no rig clatter, no highway groan, no sonic engine-roar, only the pulse of the old blue sea awakening each morning—gives me hope. There is work to be done, but where there is love, there is also always its inseparable companion, hope.

Things are happening too fast, these days, out in the dry old blue sea. We need a time-out. We need to think things over. We need to buy back some of the rarest thing, time, for every living thing out there, ourselves included.

Sage Spirit: The American West at a Crossroads, by Dave Showalter, Braided River, 176 pages, $24.95. Buy it at Mountaineers Books. 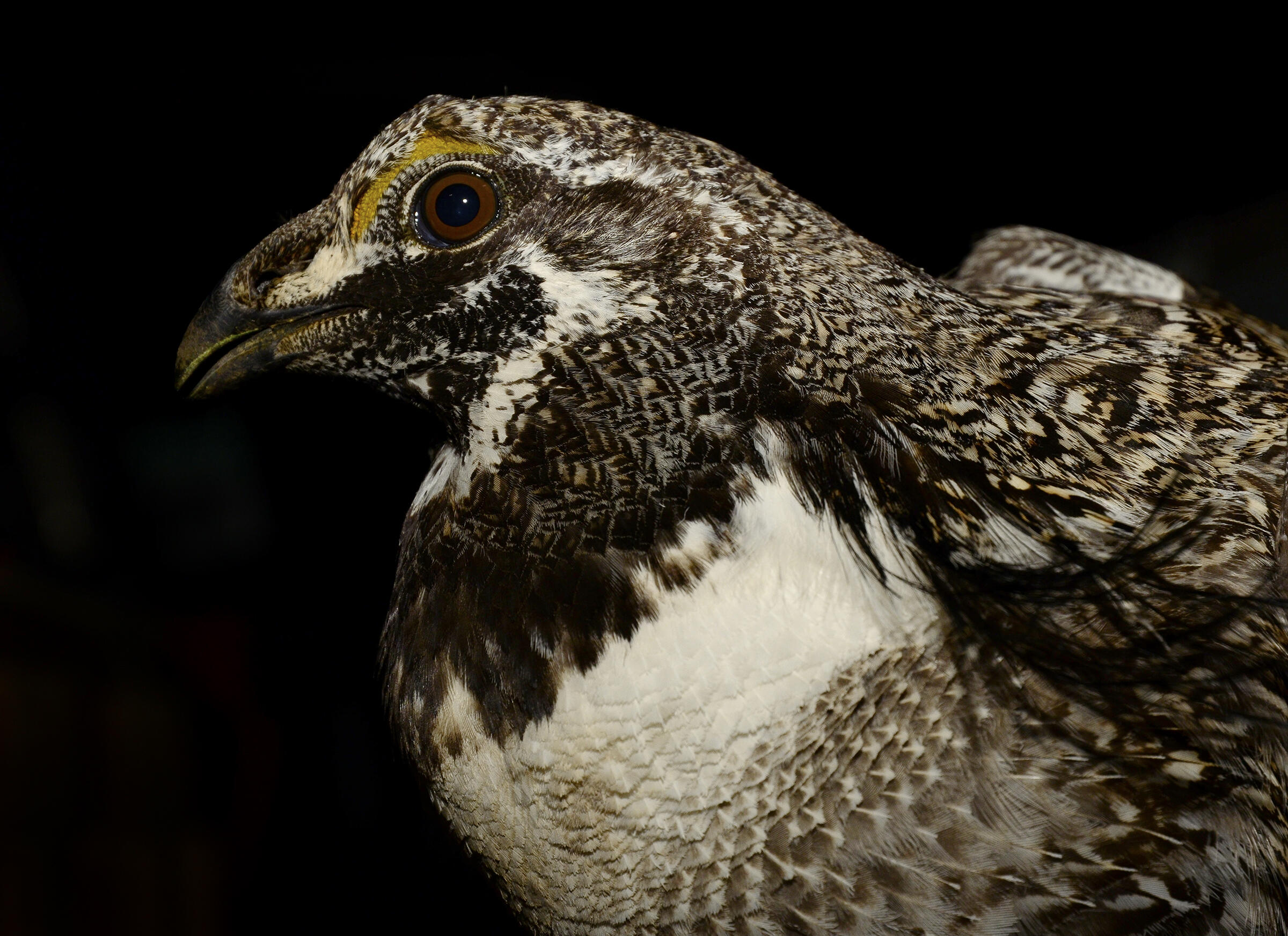 This male Gunnison Sage-Grouse is one of several that were collared and loaded for transfer as part of a Colorado Parks and Wildlife trapping program. Photo: Dave Showalter 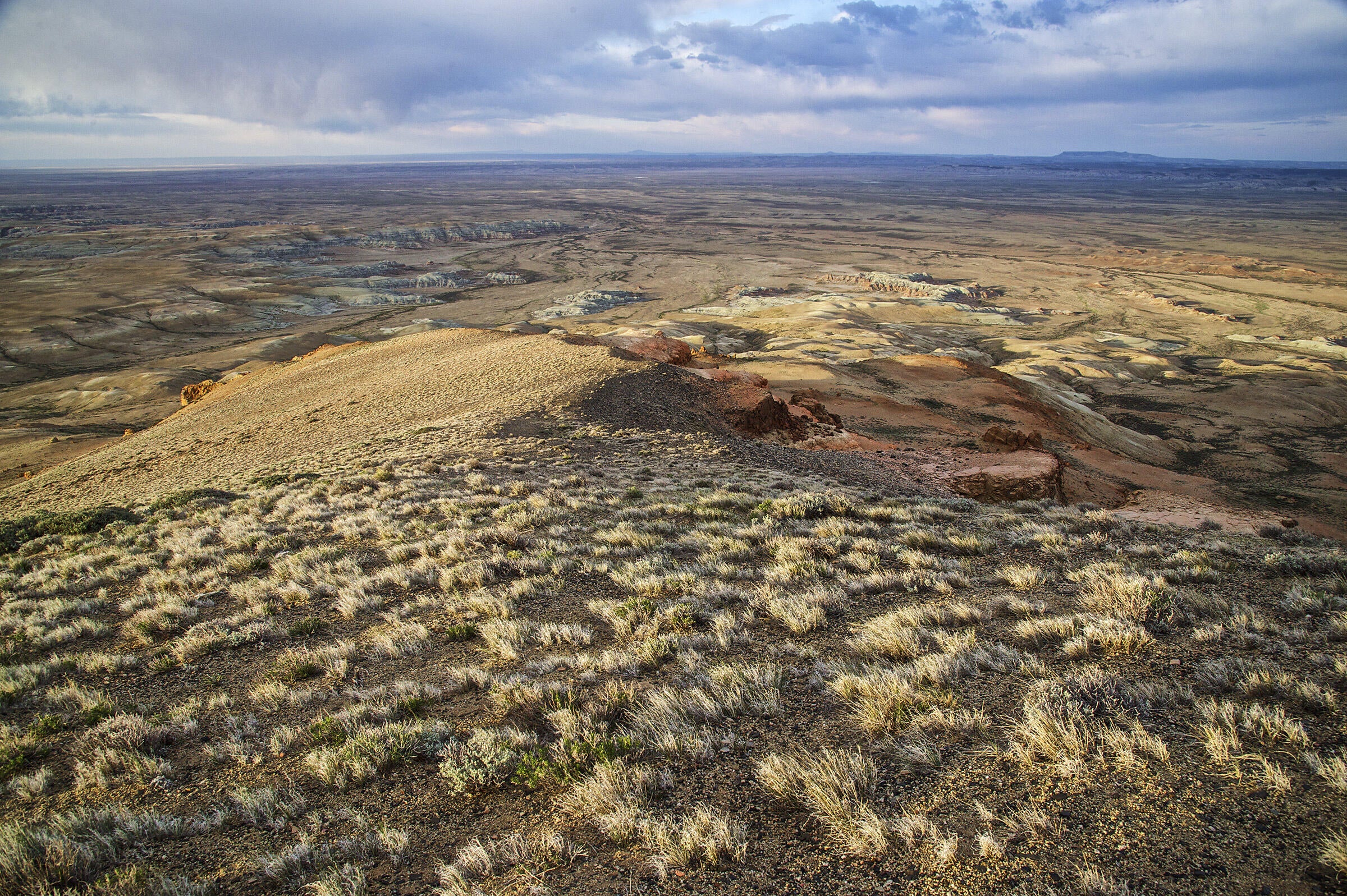 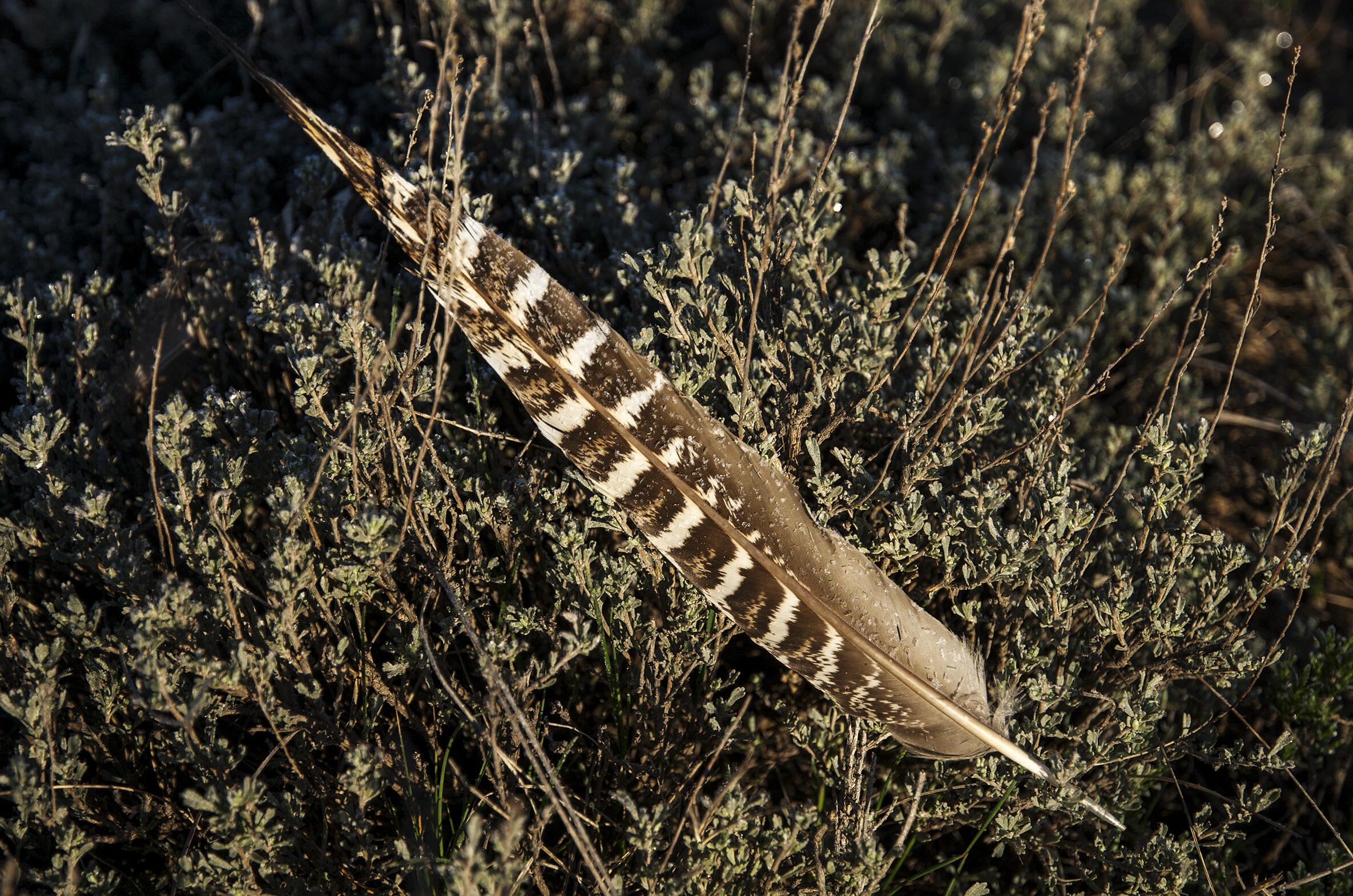 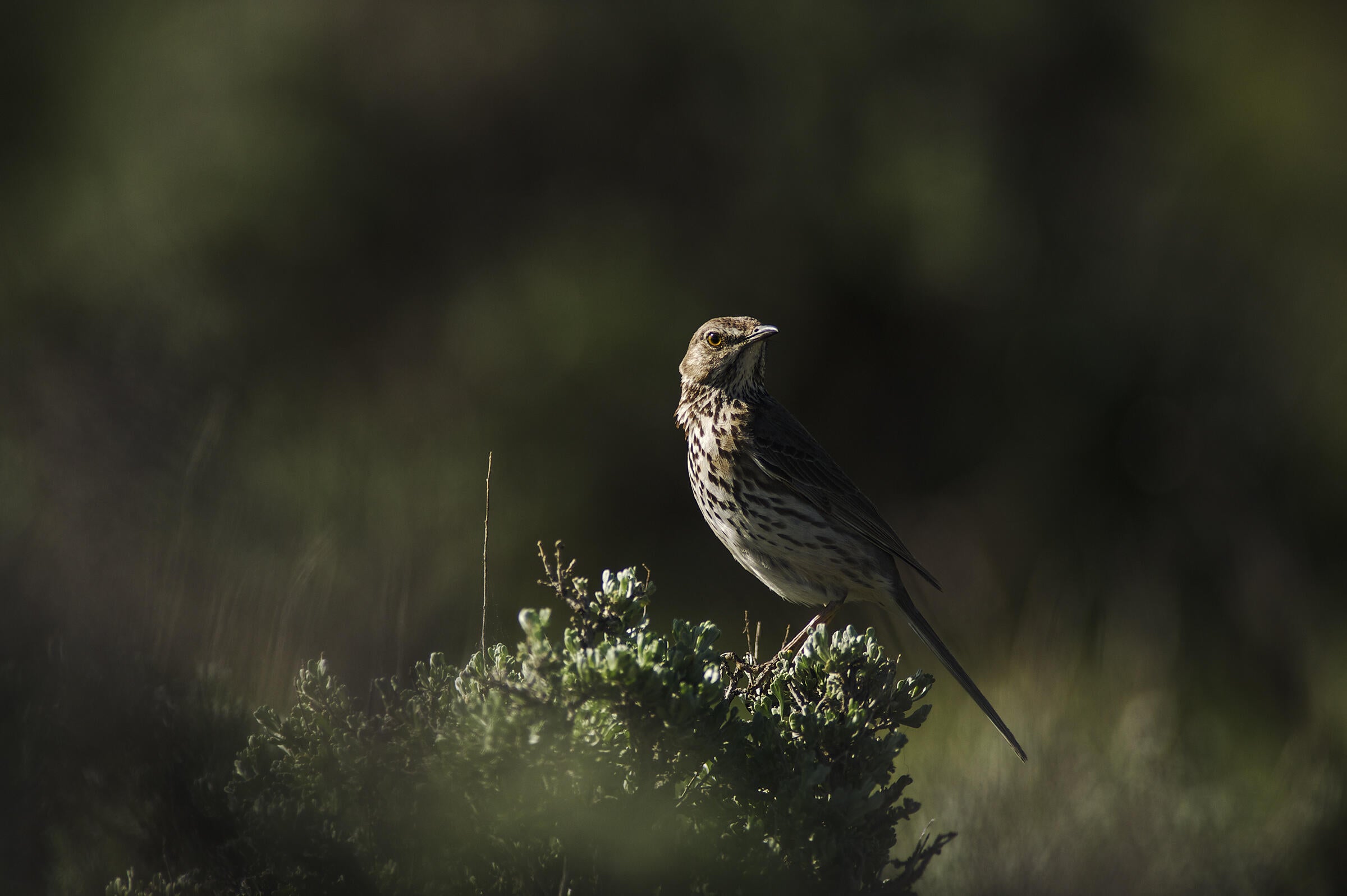 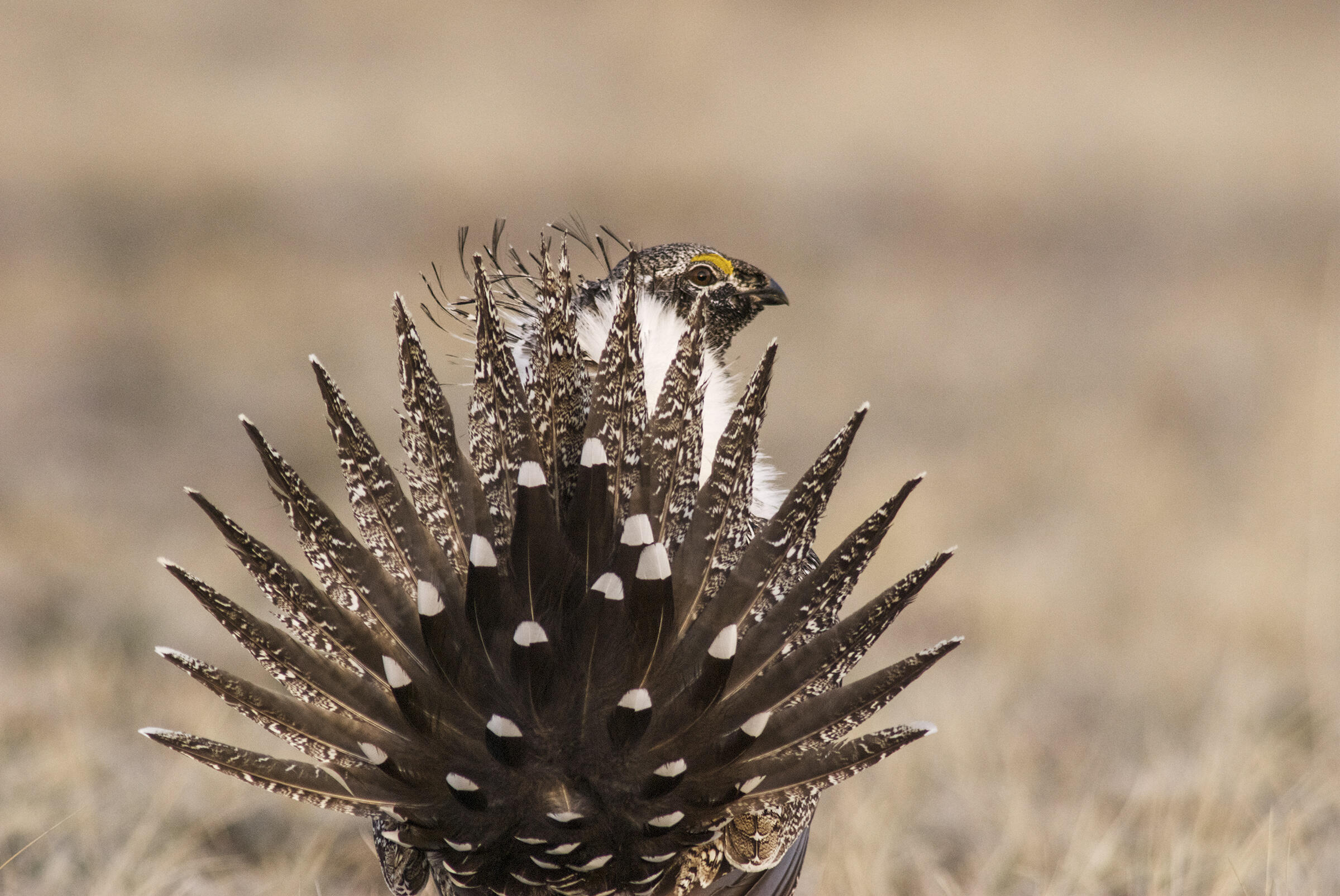 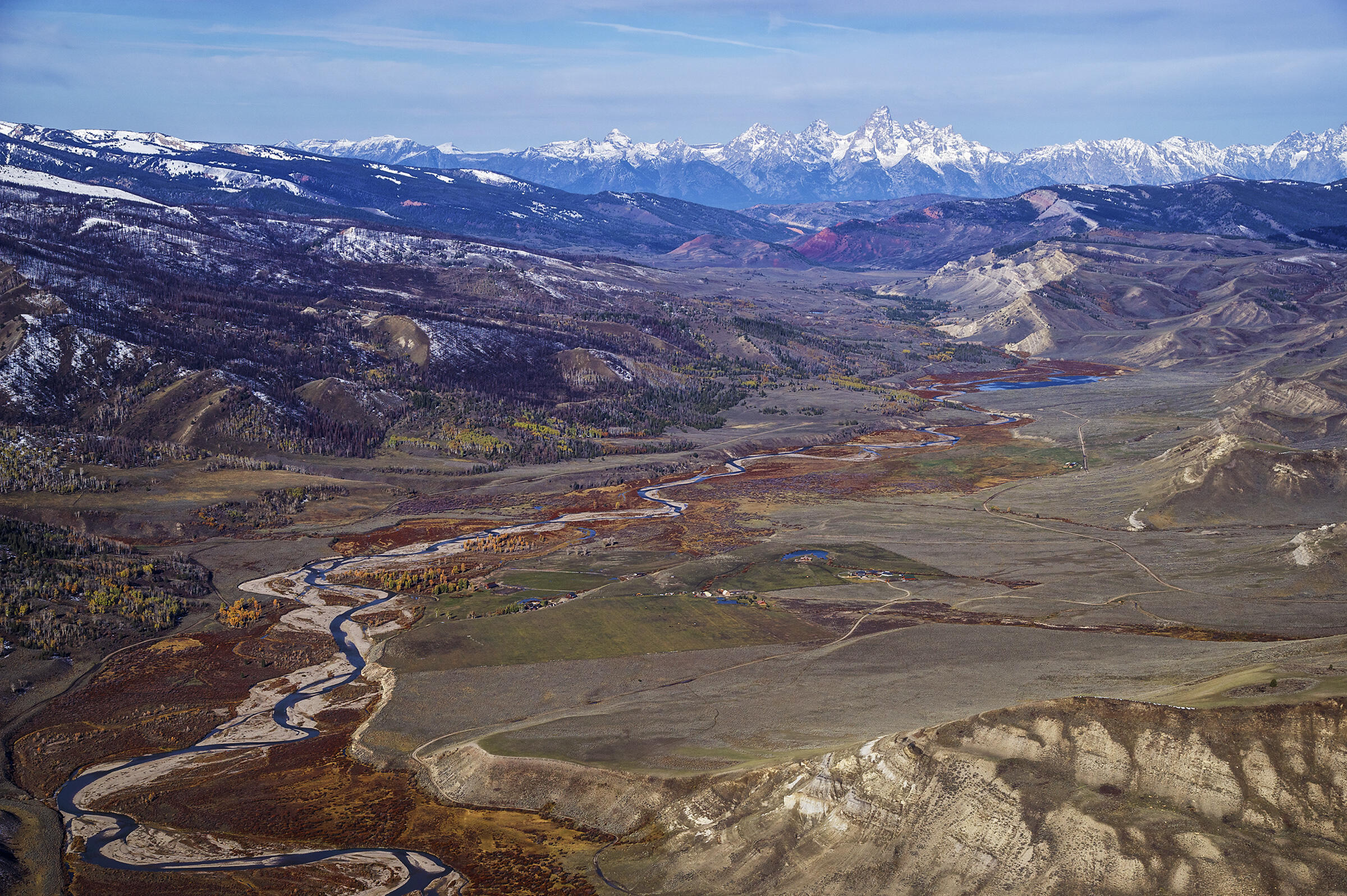 This aerial view of the Gros Ventre River Valley shows a large swath of the “path of the pronghorn” migration corridor, with the Teton Range as a backdrop. Bridger-Teton National Forest, Wyoming. Photo: Dave Showalter 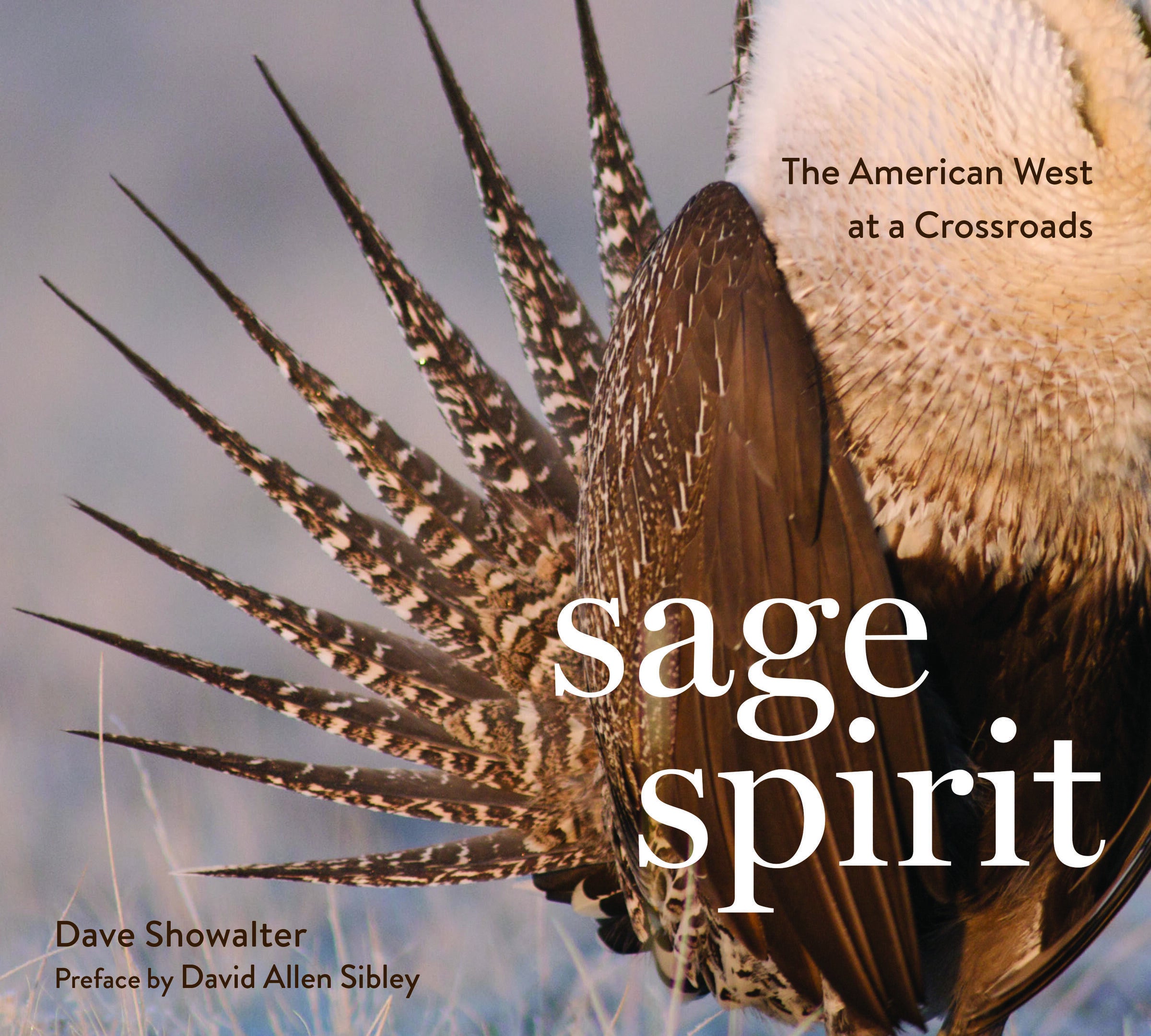