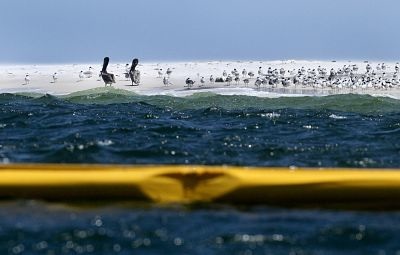 Two brown pelicans and shorebirds on Ship Island as a boom line floats just offshore Thursday, April 29, 2010 in Gulfport, Miss. Several hundred yards of boom line has been set up on the north side of the island to try and contain the oncoming oil spill. (AP Photo/The Sun Herald, William Colgin)

On Friday, April 30, a boat crew rescued the BP oil spill’s first known avian victim, a northern gannet, smothered in oil that could strip it of its insulation or poison it if ingested. The northern gannet swam to the vessel and hopped onto a pole the workers held out. The oiled bird, surely the first of many, is now recuperating at a BP-funded rehabilitation center staffed by Tristate Bird Rescue and Research and the California-based International Bird Rescue Research Center (IBRRC).

Jay Holcomb, IBRRC’s executive director, is on site. Yesterday he said rescue crews were waiting for the rain to clear before looking for more birds. In terms of where the northern gannet and other avian victims rescued from the disaster will be let loose once they’re rehabilitated, Holcomb said he’s “not sure where we are going to release them at this point. It all depends on the spill.” Holcomb and the other bird rehabilitation experts on the ground are preparing to care for potentially thousands of birds.

From how oiled birds are cleaned to avian survival rates from previous spills, IBRRC provides offers in-depth answers to many questions about oil spills and birds. The group has responded to more than 100 oil spills, including Exxon Valdez in 1989, and cared for more than 140 different species of birds, mammals, and reptiles.

Do you wash birds as soon as you get them?
No! Oiled birds often suffer from hypo or hyperthermia. Many haven't eaten in days and are often dehydrated and exhausted by the time we capture them. They must be stabilized before attempting cleaning. Stabilized birds have a much higher survival rate than birds that are not stabilized prior to being washed. A bird can safely be held as much as 5 days before being cleaned.

How long does it take to wash a bird?
The time varies depending on the size of the bird and the amount of oil on it. Obviously, a heavily oiled pelican will take much longer to wash than a lightly oiled duck. The average wash and rinse time is approximately 45 minutes.

What do you use to wash birds?

We use "Dawn" dish washing liquid. IBRRC has conducted research on most of the commonly available cleaning agents and "Dawn" meets all the criteria we have established for appropriate cleaning agents. Those criteria are the ability to remove most oils, effectiveness at low concentrations, non-irritating to the skin and eyes, rapid removal from feathers (rinsing), and is easily accessible. Procter and Gamble now donates all "Dawn" detergent to IBRRC and other rehabilitation organizations.

How do you restore the natural oil to a bird's feathers after washing?
We don't! Bird feathers are naturally waterproof but after washing, each feather must be aligned properly so that water cannot seep through the microscopic barbes and barbules that are part of the vane of each feather. Each feather is made up of microscopic barbs and barbules that hook together like "Velcro". Once hooked together, they become a tight waterproof barrier. Each properly aligned feather overlaps another like shingles on a roof creating a temperature controlled barrier. Birds align their feathers by preening (combing their feathers) during which they distribute secretions or waxes from the uropygial (preen) gland located at the base of the tail throughout the plumage. Remember, bird feathers are already naturally water repellent. The secretions from the uropygial gland help in the long term maintenance of feathers by keeping the feathers supple so alignment can be maintained.

How much water does it take to clean a bird?

The amount of water used depends on the size of the bird, how badly it is oiled and the bird. One pelican can use as many as 300 gallons of water. During the "Tenyo Maru" oil spill we cleaned 700 birds and used 1,000,000 gallons of water. Much of that was in the pools we need to swim the birds after they have been cleaned.

If you have a lot of birds and enough volunteers why not wash the birds all night long?
In the early years at IBRRC we did just that until data analysis showed a marked increase in mortality of the birds washed after dark. It would seem that their stress is increased when their circadian rhythm is upset as is ours. They also need plenty of rest and we have found that leaving them alone to sleep at night reduces mortality.

Do the animals know that you are helping them?

No. They are wild animals and highly stressed by handling and captivity. Most likely they regard us as predators that are about to eat them. Although some species like penguins, pelicans and murres will act more friendly as they become accustomed to being fed fish by humans, they need what is termed "flight space". This is the space between them and humans that allow them to feel comfortable when in the presence of their care takers. Getting too close to them will create a stressful situation and often painful bites to their intruder. Handling and viewing is only done when absolutely necessary in order to minimize stress.

How many animals do you expect to treat in a spill?
As many as we receive. It is impossible to know in advance how many birds will be impacted by an oil spill. We work with local state and federal biologists to look at what animals are in the area at the time of a spill and try to ascertain what species and how many of them may be exposed to oil. Then we plan for the worst and hope for the best.

How long do birds have to stay in captivity?
That depends on the health and condition of each animal. Sometimes a bird will have an injury or illness prior to oiling and that will call for an extended stay in captivity. The quickest a bird can be released is usually around 5 days however most average up to 7 days in captivity. Our goal is always to get them in and out as soon as possible to reduce the effects of captivity.

What is the biggest problem in rehabilitating oiled wildlife?
There is not just one. Inadequate or no facilities to properly care for the animals has historically been one of the biggest and consistent problems but difficulties can differ from spill to spill. In general, people don't seem to realize that cleaning oiled birds is not just a simple laundry problem. For example, sea birds ingest oil and can suffer from the internal effects of oil, extending their stay in captivity. Young birds require special care and each species has its own diet and caging requirements. This all adds up to a lot of work and coordination that has to be done in a very short amount of time. Many of the problems generated are "people generated". Sometimes the irate public can be obstructive, the media can be intrusive and demanding, and volunteers can have unrealistic expectations and cause many problems. The problems in oil spills are equally people and animal related.

How much does it cost to rehabilitate oiled birds?
The cost for wildlife rehabilitation will differ from spill to spill. For example the cost per bird during the "Exxon Valdez" oil spill was extremely high due to the costs per day for the many rescue vessels and the extended period of time we spent in Alaska. The modification of facilities on each spill adds to cost as well. Determining the cost per bird is difficult. It is unrealistic to take the over all cost of the rehabilitation program during a spill and divide it by the amount of birds in a spill to get the cost per bird. This is a common mistake that has been done with many oil spills that gives the impression of very high costs "per bird". You must take all the variables in each situation that effect the cost and separate them out in order to gain an actual amount per bird. There is really no average amount.

What is your survival rate?
The survival rate will differ with each oil spill because of all the factors that effect it. Some of those factors are the toxicity of the oil, how rapidly the birds are collected and stabilized, what condition the bird was in before it was oiled, and the species involved. We have had release rates as high as 100% and as low as 25% in the early years. We now average about 50% to 80%. Again, it depends on many variables and cannot be predicted.

Where do you release them?
All rehabilitated animals are released in clean and oil free areas chosen by federal and state trustee agency personnel and IBRRC. If the area that they were captured in is still oiled then the animals are sometimes transported to more remote locations for release.

How many of them live after they are released?
We don't know. We band all of our released birds with US Fish and Wildlife stainless steel bands. We get some returns on them but most of the birds we release live in remote regions and are never seen again. We have worked with avian specialists to fit rehabilitated birds with transmitters that allowed them to be monitored for a period of time. We plan on doing more post release studies in the future to help us determine the survival rate of oiled birds.

Does IBRRC handle other animals besides birds?
Yes. We have treated mammals such as raccoon, beaver, and muskrats and reptiles including snakes and turtles. Most of the animals we care for are seabirds, wading birds and waterfowl. We do not treat large marine mammals as there are other groups who specialize in that area.

NOTE: The public is advised not to attempt to rescue oiled or injured birds or wildlife.  Doing so can cause more harm than good.  If oiled wildlife are found, call the Oiled Wildlife hotline  established by BP at (866) 557-1401.