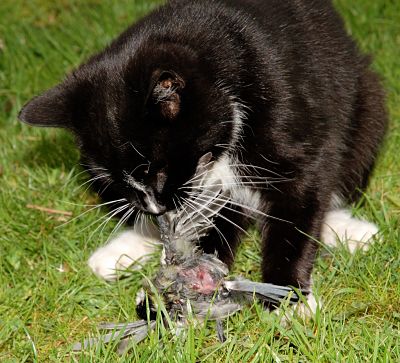 Photo: Wikimedia Commons/dr_relling
Feral cats—domestic cats that live outdoors and are ownerless—account for $17 billion in economic loss from predation on birds in the U.S. every year, a new, peer-reviewed paper by University of Nebraska-Lincoln researchers finds.
“Feral cats are opportunistic hunters, taking any small animal available, such as pheasants, native quail, grouse, turkeys, waterfowl, and endangered piping plovers,” write Aaron Hildreth, Stephen Vantassel, and Scott Hygnstrom in the paper, Feral Cats and Their Management (click here for a pdf). “The estimated economic impact of cat damage to birds does not include losses to small mammals, reptiles, and amphibians.”
(The estimated cost per bird is $30, based on literature citing that bird watchers spend $.40 per bird observed, hunters spend $216 per bird shot, and bird rearers spend $800 per bird released.)
There are an estimated 60 million feral cats in the U.S., and as many or more kitties kept as pets. The study reports that cats are responsible for the extinction of at least 33 avian species worldwide, and the felines kill an estimated 480 million birds a year. Besides predation, feral cats also carry and transmit diseases such as cat scratch fever, plague, rabies, and toxoplasmosis. (States require pet cats to be vaccinated).
“The ‘multitudes’ of feral cats that blight America hasten the extinction process,” writes Audubon Incite columnist Ted Williams in “Feline Fatal” (Sept-Oct 2009).

From the story:
Many feral cat advocates support trap, neuter, and release (TNR, or TNVR—‘v’ is for vaccinate) programs, and have successfully gotten city ordinances passed that allow for maintaining feral cat colonies. Cook County's 2007 ordinance, for example, permits residents to manage colonies as long as they neuter, spay, and vaccinate the animals against rabies and give them microchip implants.
But the report authors don’t think TNR alone will reduce the impact on birds. “No real-world example of eliminating a colony through TNVR exists, and evidence of large-scale colony reduction is anecdotal,” they write. “Furthermore, TNVR can cost over $100 per cat (including trapping, spaying/neutering, vaccination, and transport), and the cats are still able to prey on native birds and mammals.”
“This report is a must read for any community or government official thinking about what to do about feral cats. It encapsulates the extensive research on this subject and draws conclusions based on that data.  Not surprisingly, the report validates everything American Bird Conservancy has been saying about the feral cat issue for many years, namely TNR doesn’t work in controlling feral cat populations,” said Darin Schroeder, Vice President for Conservation Advocacy for American Bird Conservancy.
An integrated pest management system is the best way to control feral cat populations, the authors conclude. They recommend habitat modifications (reducing availability of food, water, and shelter for feral cats); exclusion (e.g., fencing in gardens); devices to frighten the animals away; trapping and live-capture with removal; and fertility control.
To protect pets, they recommend owners use passive integrated transporter (PIT) tags—small microchips that are injected under the skin and identify the cat.
In addition for calling for new city and state legislation to clarify the legal status of feral cats, the authors also stress the importance of public support. Simply put, don’t feed feral cats, and if you own a cat, keep it on your property.
Cat owners can purchase a solution in the form of a ‘catio’—an outdoor, fully fenced patio just for kitties. The study authors don’t mention catios, but they’re becoming something of a trend, as we’ve previously reported.
Click here to read about catios, and share your thoughts on cats and birds in the Comment section below. As always, be considerate—no vicious fighting like, well, cats and dogs, please.