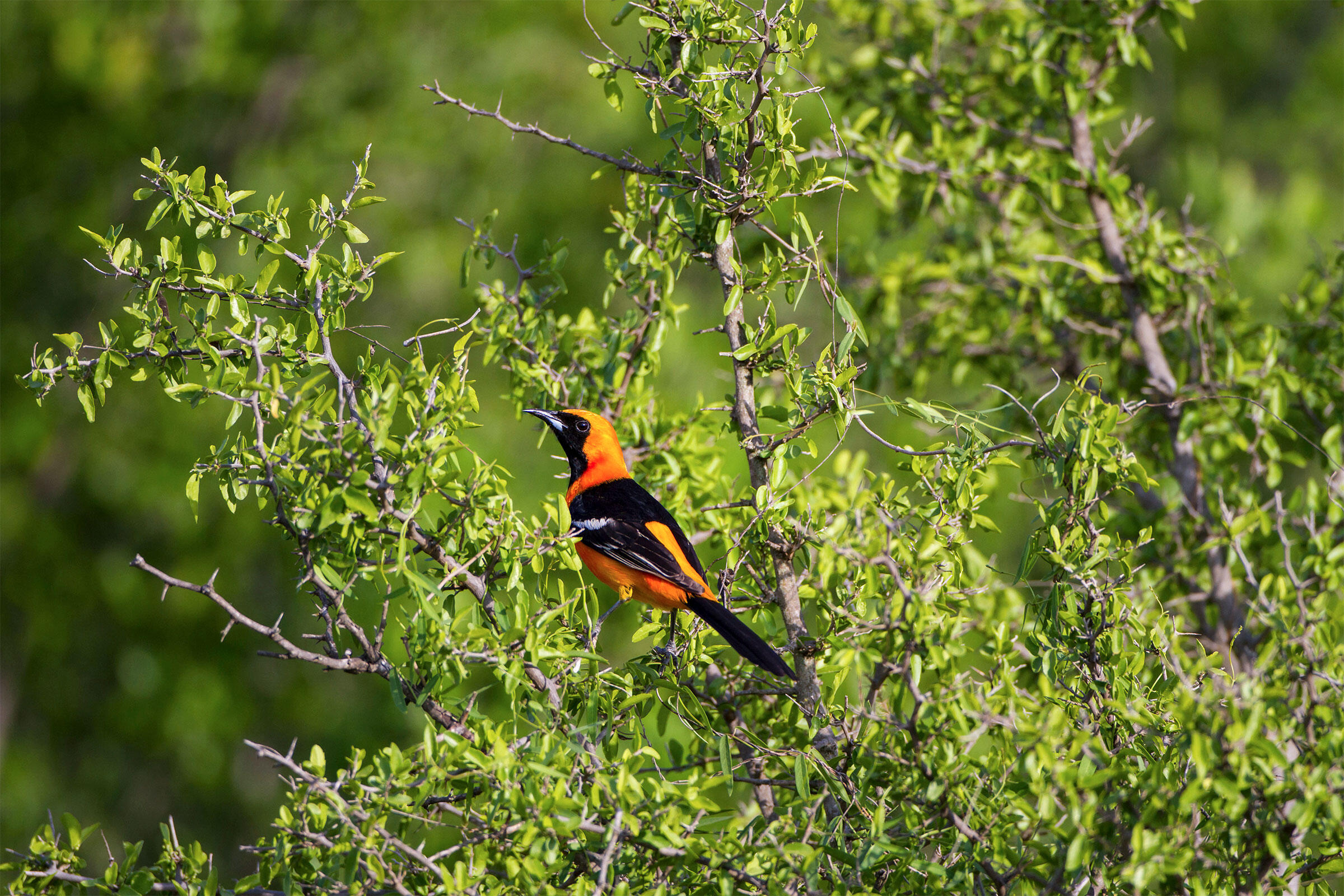 Five Regal Orioles That Put Other Fall Colors to Shame

From ochre to hellfire orange, these birds scream Halloween in any season.

As summer turns to fall and the autumnal equinox takes hold, the colors of nature hit a more sizzling note. The verdant trees and wildflowers morph into the signature golds, oranges, crimsons, browns, and blacks of the harvest season. The local bird species are changing as well, and while most orioles are already on the wing to their southern homes, I can’t help but remember their vivid jack-o-lantern colors at this time of year.

New World orioles, which take their names from aureole (Latin for golden), were named so for their resemblance to the yellow-and-black birds of Europe. But the orioles in North America are actually blackbirds, and only a few types are yellow and black. Regardless, the name stuck, and now there are 10 species recorded regularly in the United States. Their plumages range from ochre to a really bad spray tan, and they grace everything from neighborhood elm stands to blackberry thickets. Let’s take a look at the five most common species.

Perhaps the most Halloween-y bird of all, males of this Southwestern species sport a fiery cowl, jet-black tail, and inscrutable mask. Females, on the other hand, show more demure shades of gray goldenrod. Like the rest of the orioles, Hoodeds are masterful weavers, making perfectly engineered hammocks that are both aesthetic and resilient. When they aren’t in the nest, they’re skulking in low thickets and palm trees. 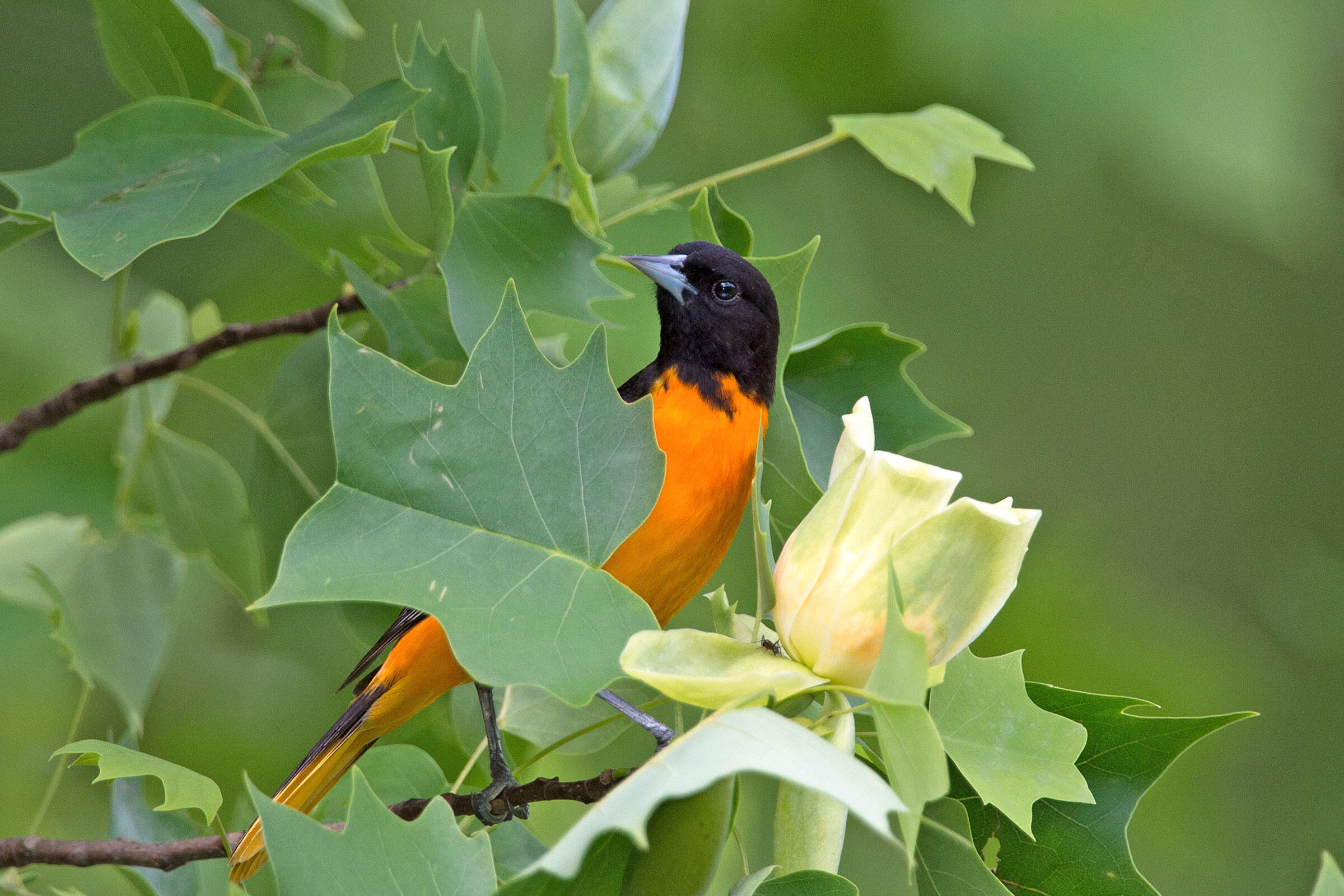 A medium-size oriole with a bright orange body and black head, this Eastern species is a familiar hint of spring (and fall, if you’re talking postseason baseball of yore), when its R2-D2-like whistles can be heard ringing clearly across the neighborhood. It’s also a favorite feeder bird with a soft spot for grape jelly and oranges. The name isn't directly inspired by Charm City; instead, it comes from Lord Baltimore, the founder of Maryland, who had a black and orange family crest. 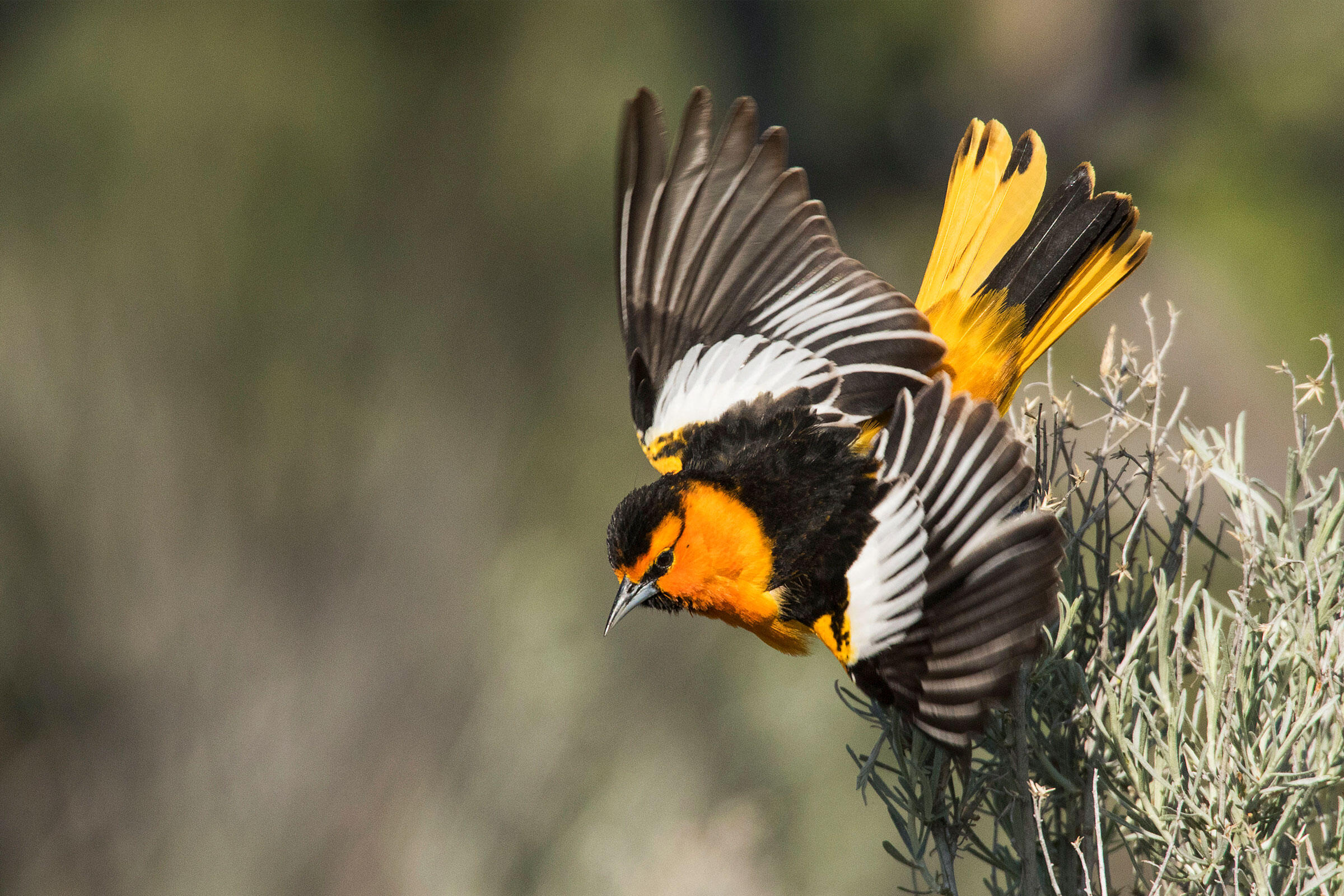 Another mid-size oriole, the male Bullock’s cuts a stately figure with a black back, bold eye stripes, and generous white wing bars. In fact, his patterns are so clean, they seem to have been carved by an artfully wielded knife. Females and young birds may fade into the amber and gold fall leaves, but they stand out from Baltimores with grayer bodies and more yellow on the heads. Well, that and they can only be found west of the Mississippi. 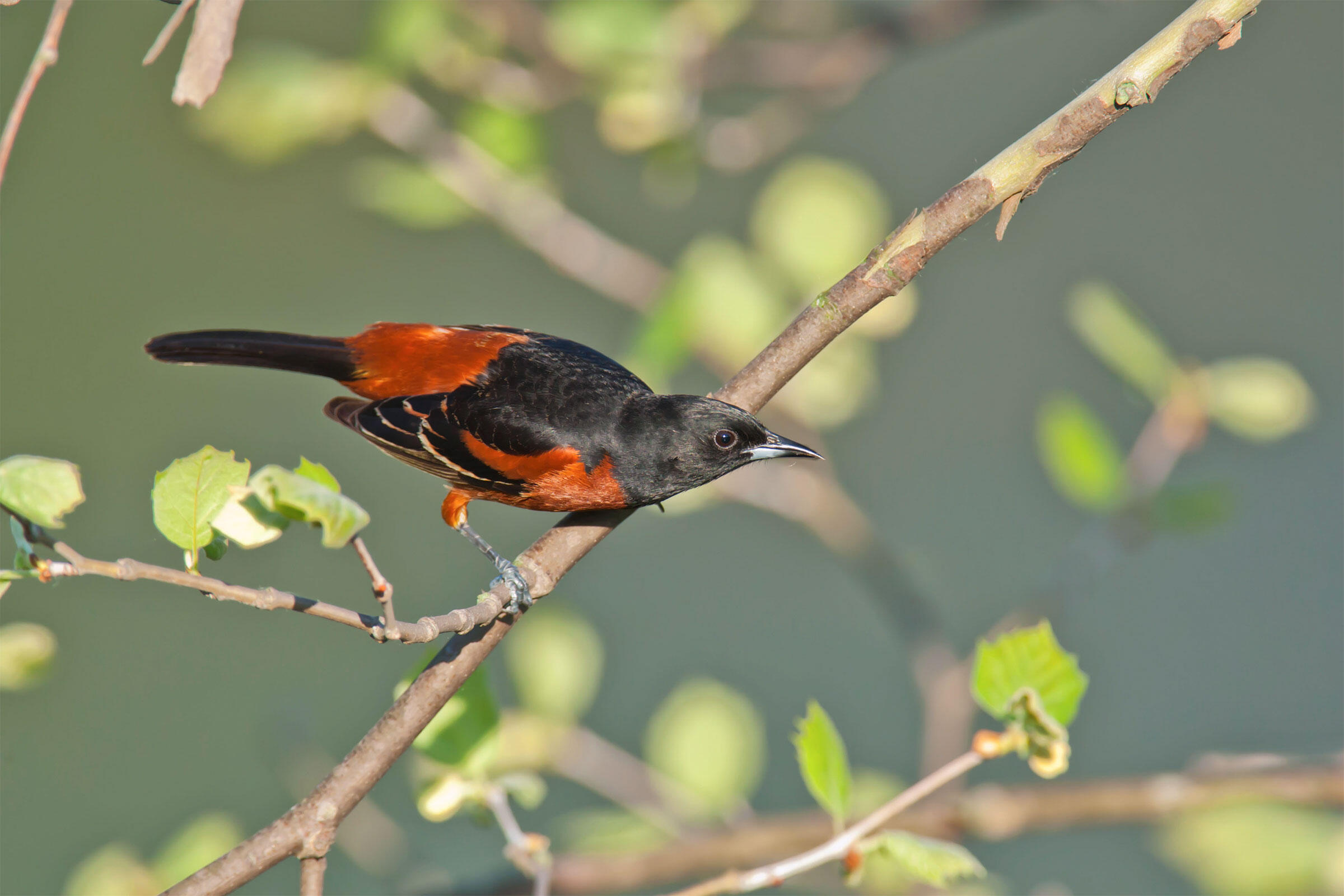 Our smallest and darkest oriole, Orchards like to haunt shrubs, hedgerows, and scrubby undergrowth. Not truly orange and black, they’re more reminiscent of the red sumac berries that fill fall trails. Females are yellow with a greenish wash, and males sound like dried, rattling cornhusks when spooked. Fun fact: In the 1700s, ornithologist Mark Catebsy dubbed the bird the Bastard Oriole because he didn't think it measured up to the fancier Baltimore Oriole. So, the species' scientific name is Icterus spurius, which is Latin for illegitimate. 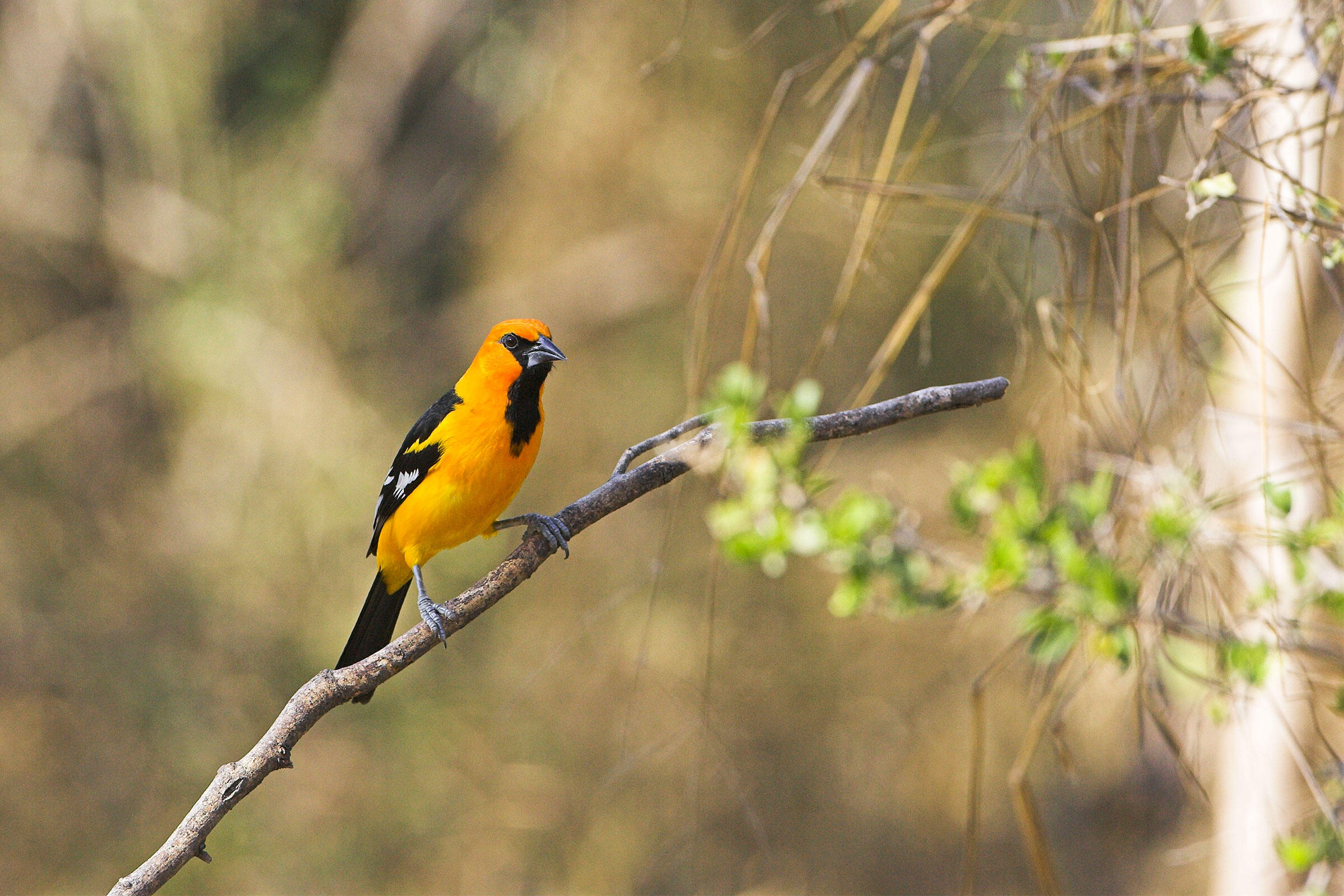 Altamira Oriole (female or male; it's hard to tell because they have matching feathers). Photo: Mike Read/Alamy

Last but definitely not least, the Altamira is our largest and, in my opinion, most stunning oriole around. Found all year long in the Rio Grande Valley of southern Texas, this beautiful bird’s song is a steady string of whistles that’s just as chipper as its shiny look. Even better, Altimiras are monomorphic, which means females boast the same orange, black, and white combination.

Freebie alert! Want to know the other five orioles that regularly appear in the U.S.? Download our redesigned Audubon Bird Guide app to find out.

It's Pride Month! Visit our Threadless store for this year's merch. 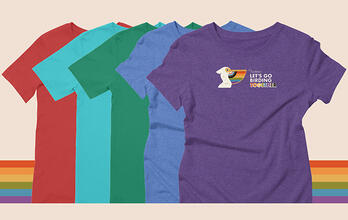