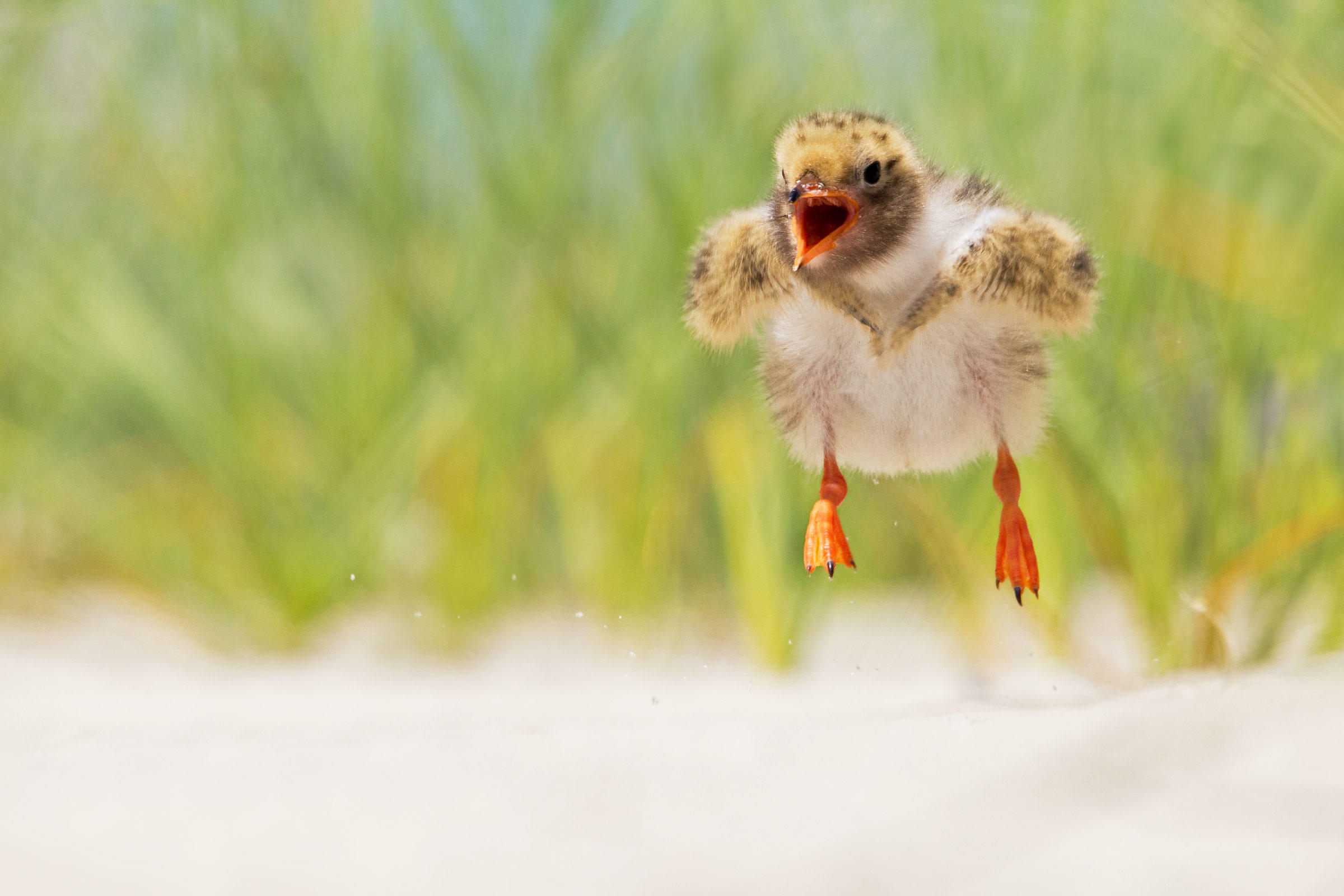 To capture this photo of a Common Tern chick Franceski named Scooter, she first started by spending countless hours observing and studying Scooter's parents, from the time they began mating to when they finally laid their eggs. One day, after Franceski had been laying in the sand for hours, a parent flew from the beach plant that protects the chick from the sun and predators to go hunt. Upon the parent's return, Scooter came running out from beneath the plant into the open in excitement, anticipating her meal. After engulfing a sand eel, she began flapping her wings and jumping simultaneously. And Franceski was ready. Photo: Lisa Franceski

Lisa Franceski didn’t mean to become a shorebird photographer. But she lives on Long Island, only a half hour drive from the shore, so when she was given a DSLR camera she figured she would take it to the beach. There, she saw a New York State Department of Environmental Conservation sign with a handsome drawing of a squat little bird on it. “I didn’t even know what a Piping Plover was,” she says.

That was just eight years ago, but since then Franceski has specialized in shadowing individual bird families through their New York nesting season—and in some cases, year after year. And it's all thanks to the first Piping Plover she saw, which sported colored bands from an ornithologist tracking the species’ migration. “It was a whole new world when I met Polly,” as she nicknamed the bird. She photographed Polly for four years, until the plover stopped showing up at the beach.

It’s not just plovers that fascinate Franceski: She also chronicles the lives of Common Terns, Least Terns, American Oystercatchers, and Black Skimmers. She credits her deep knowledge of each species’ behavior for her ability to capture compelling images. “Knowing their behavior is just as important as knowing your camera gear,” she says, adding that photographers should plan to study up on the lifestyles of the shorebirds they want to shoot, from their flight habits to their foraging practices.

That familiarity will translate into better photographing opportunities, she points out. Piping Plovers, with their “run, run, stop” rhythm, lend themselves to the eye-level portraits she particularly enjoys shooting. American Oystercatchers also spend much of their time on the ground, unlike, say, adult Common Terns or Black Skimmers, which are more likely to be flying. Those behavioral differences mean different camera settings; Franceski prefers a single shot in autofocus for birds on the ground and continuous shooting for birds in flight.

In part, her knowledge of each species is a reflection of her priorities—she says she’s really there for the birds, she just happens to be carrying a camera. On some days, she watches them for hours before snapping a shot, despite the mucky nature of her favored technique. To catch the birds at eye-level and avoid startling them, she predicts their movements, then lies in the sand and waits for the birds to pass by. Often, the sand is wet, and sometimes she’s in the path of a stray wave. On the plus side, she doesn’t need a tripod—her elbows braced in the sand are steady enough.

Franceski, who has spent 20 years as a registered nurse, was born and raised in upstate New York, where she was interested in backyard birds. Now, in Long Island, she lives with a rescued Monk Parakeet, which she confesses she spoils. Shorebirds have been an entirely new adventure for her, and one she has found highly absorbing. “I have terabytes and terabytes and terabytes of shorebirds on my hard drive,” she says. She recognizes her appetite for shorebird photographs may outpace others’. “How many poses of a Piping Plover can you look at?,” she asks rhetorically.

Given the amount of time she spends watching shorebirds, it’s not surprising she is protective of them. She makes it a point to explain their habitat needs to dog-walkers and other beach-goers, and at her beach earlier this spring she picked up more trash than would fit in her car’s trunk.

One of her favorite moments photographing occurred in 2011, when she found a Common Tern nest. After she saw the first hatchling, her knowledge of birds once again proved a benefit: She knew the next egg usually hatches two days later, so she was there and ready for the big moment of the next chick's world debut. “Lo and behold this little peep pops up,” she recalls of seeing the chick break through the shell. “You would think it was my own child, it was the most incredible moment.”