Dory and Skiff feed their hatchlings. Video: Courtesy of Explore.org 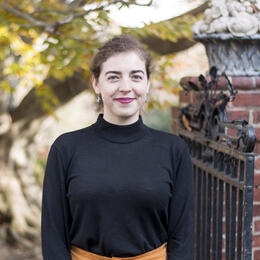 From a stinging horde of wasps to the dramatic nighttime ambushes by Great Horned Owls, those familiar with Hog Island’s Explore.org live cameras have followed along closely with the tumultuous nesting seasons of on-cam Ospreys Steve and Rachel. But with a new nest and a relatively new Osprey couple, the tides have turned and three Osprey chicks have successfully fledged this past summer for the first time ever at the new site.

Why the turn of events? Thanks to the hard work of Hog Island campers during their annual service week, Hog Island introduced an additional nesting spot atop the Boat House deck on the mainland, directly across the narrow channel and about a quarter of a mile away from the original Osprey nest on Hog Island. The Osprey cam structure was built at the Birds of Maine Islands: A Service Week session in September of 2015 under the leadership of Audubon facilities manager Eric Snyder. The camera was installed the following season in 2016.

Each year, Hog Island offers chances like this for campers to get involved on the islands and mainland to support bird conservation—whether that be for their resident terns, Tree Swallows, or, in this case, Ospreys. Grounded in improving bird habitat, the week aims to inspire bird lovers to take action.

“It's a way for people to get hands-on with bird conservation and give back to birds in a very tangible way. The work supports our research program, the Seabird Institute, and [the campers] also learn new skills, meet new friends, and get energized about conservation. It's a fun week,” said Eva Lark, Audubon’s senior manager of public programs for Hog Island.

The strategy behind this specific service project was simple: More Osprey couples are better than one when protecting their chicks.

“The hope was that by putting a nest on the mainland, the Ospreys could help each other,” said Lark. Since Ospreys don’t require large territories, they’re more than happy to live close to each other and help jointly defend that space against predators, like Bald Eagles or owls.

Success at this new nesting spot wasn’t immediate. Though the new nest was immediately occupied by a young Osprey couple the summer after it was installed, they unsuccessfully mated on the nest for two years before abandoning it. Then in 2021, Dory and Skiff—the on-camera Osprey pair—settled on the nest and had a season without producing any viable eggs. However, this isn’t very surprising to the researchers at Hog Island.

Very often, when Ospreys first mate as a brand new pair, they need a couple seasons to adjust to each other, take care of the eggs themselves, and adapt to their surroundings—especially in a territory with a heavy human presence. The fact that the pair was able to produce eggs at all was a good indication that they were working out, with the ultimate positive outcome of raising three healthy fledglings—named Schooner, Skipjack, and Sloop—being achieved this past summer in 2022.

For Lark and other Seabird Institute researchers and staff, the best part of this happy occurrence after years of bad luck was being able to share in this turnaround with people from around the world. The Explore.org cameras provide an intimate glimpse into the lives of birds that we would not be privy to otherwise.

Speaking on its accessibility, Lark has seen how the cameras can level the playing field. Not everyone can visit Hog Island, but for those with an internet connection, they can “tune in and feel like [they’re] there...and learn from the comfort of [their] home.”

Even beyond their ability to bring people together, the cameras also act as a unique tool for research. “They are an amazing tool for education because we can take clips and study them,” said Lark. “You're seeing what types of food they're eating, how they're behaving with each other. When you're on the ground, you don't see that. You don't see the housekeeping; you don't see how they're behaving with the chicks. From a research perspective, it’s groundbreaking.”

At this point the cameras are dormant, with each member of the fish hawk family having finally left the nest—Dory first, followed by Skiff and eventually, the three juveniles—to embark on their annual migration down south. Though we likely won’t get to see Schooner, Skipjack, or Sloop on the cameras again next year, many viewers will be waiting for Dory and Skiff to return to begin the cycle again.

“I think [the cameras are] going to keep advancing science and hopefully it's going to keep inspiring people to pay attention to the birds in their own neighborhood,” said Lark. “It's going to inspire them to go outside and look up.”