Food is the best way into a teenager’s heart—unless they’re in the mountains of Costa Rica on the final day of a birding adventure. Then, no one wants to eat breakfast because there are a bunch of Emerald Toucanets and Violet Sabrewings visiting the feeders outside the restaurant. That was the scene this winter, when eight teenagers wrapped up a life-changing neotropical birding extravaganza organized by Audubon's Hog Island Camp.

Eliza Fraser, a 16-year-old Pennsylvanian who’s birded seriously for about two years, was one of the teens who paid to take part in the four-day adventure to the Sarapiquí region of Costa Rica this past December. The trip was a chance for enthusiastic teenagers who’ve birded in America to get to know a whole new set of species. Beyond peering through scopes, cameras, and binoculars, the coordinators also wanted to teach teenagers about the region and the ecological shifts unfolding there.

“We feel what’s more important than just showing teenagers birds is giving them a conservation ethic,” says Eva Matthews, the environmental educator at Hog Island who led the trip, along with local birding guide Gilbert “Chito” Molina. The goal, she adds, is to empower the next generation of voters, activists, and ornithologists.

Many of the students had never been birding in the neotropics before. “I just don’t think I was really fully prepared for the immense diversity that was down there,” Josh Ward, a 17-year-old birder from Maryland, says. Ward, who started birding when he was 3 or 4 years old when his father gave him a pair of little yellow binoculars, hopes to become a professional wildlife biologist and photographer. In Costa Rica, he enjoyed being surrounded by the rainforest and its abundance of life—not only birds, but also mammals, reptiles, and amphibians as well.

For 16-year-old competitive-birder Sam Miller, one of the most striking aspects of the trip was the new perspective it gave him on his home neighborhood in suburban Maryland. “I saw how much green there was [in Costa Rica], every square foot is filled with life and vegetation,” Miller says. “I’m just wondering what this area looked like 100 years ago, before we developed it.”

Miller also shared Ward's awe in the variety of animals they saw: Along with photographs of a Magnificent Hummingbird and a Red-headed Barbet, he snapped shots of a white-faced capuchin monkey and a red-eyed tree frog. Many of the young birders were already avid photographers, so the trip organizers encouraged the teens to document their sightings. Miller, for example, got hooked on birds through photography. Ward took a similar route, but he also sketches in the field and from photographs he’s taken using a range of media. (His sketch of a female White-whiskered Puffbird can be seen to the right.) Even with all this creativity based around his photography, Ward appreciates looking at a bird without having to worry about shutter speed. “If I don’t have my camera with me, it’ll almost make me pay more attention to what’s around me,” he says.

Fraser, meanwhile, got into photography to help her identify species after a sighting. Even now, with more birding knowledge and experience, she’s less interested in the technical aspects of cameras than in memorizing distinguishing characteristics—something the trip confirmed for her. But she was still pleased to capture a photograph of a Coppery-headed Emerald, a hummingbird species found only in Costa Rica.

While the trip offered many exotic lifers for the young birders, they also got to see familar North American migratory songbirds in an unfamiliar setting. Migration pathways were another reason why Matthews and her fellow educators chose Costa Rica for the trip's location. “That could be a bird that is landing on Hog Island in May, and here it is in Costa Rica with all these tropical species,” Matthews says of species like Chestnut-sided Warblers and Northern Waterthrushes. Blackburnian Warblers, Northern Parulas, and Black-throated Green Warblers also spend the winter in the region before flying north to breed among Hog Island’s spruce, pine, and birch trees. These species helped Matthews make the case for thinking about conservation both at home and abroad.

Reminders of the importance of conservation were everywhere on the trip, including Great Green Macaw sightings that particularly excited Matthews. “They’re big, they’re beautiful—but they’re also a species that, 20 years ago, you wouldn’t see in that region,” Matthews says. The birds nest in old, large trees, which have been felled by heavy deforestation, driven in part by agriculture. The species is now considered globally endangered. 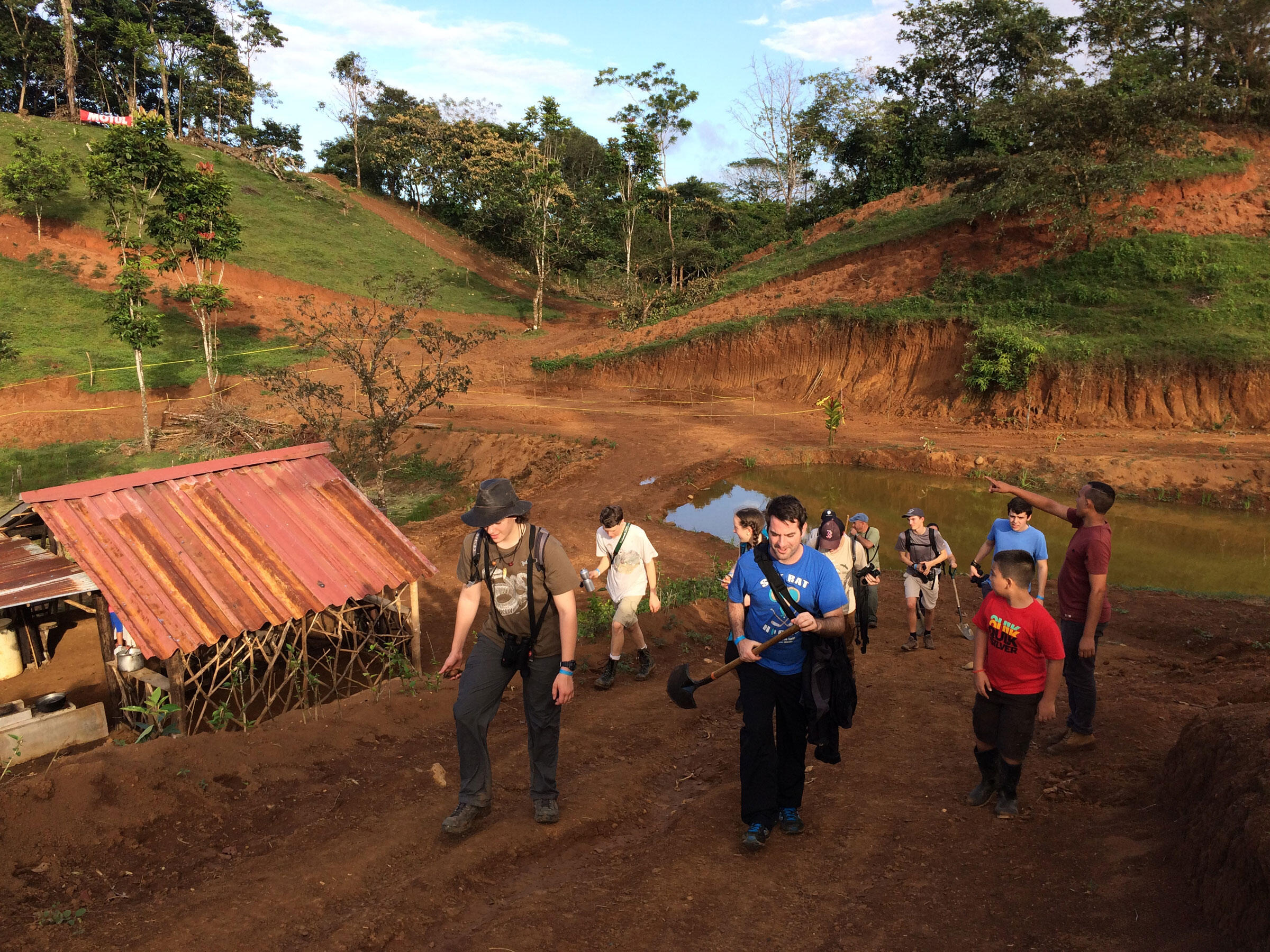 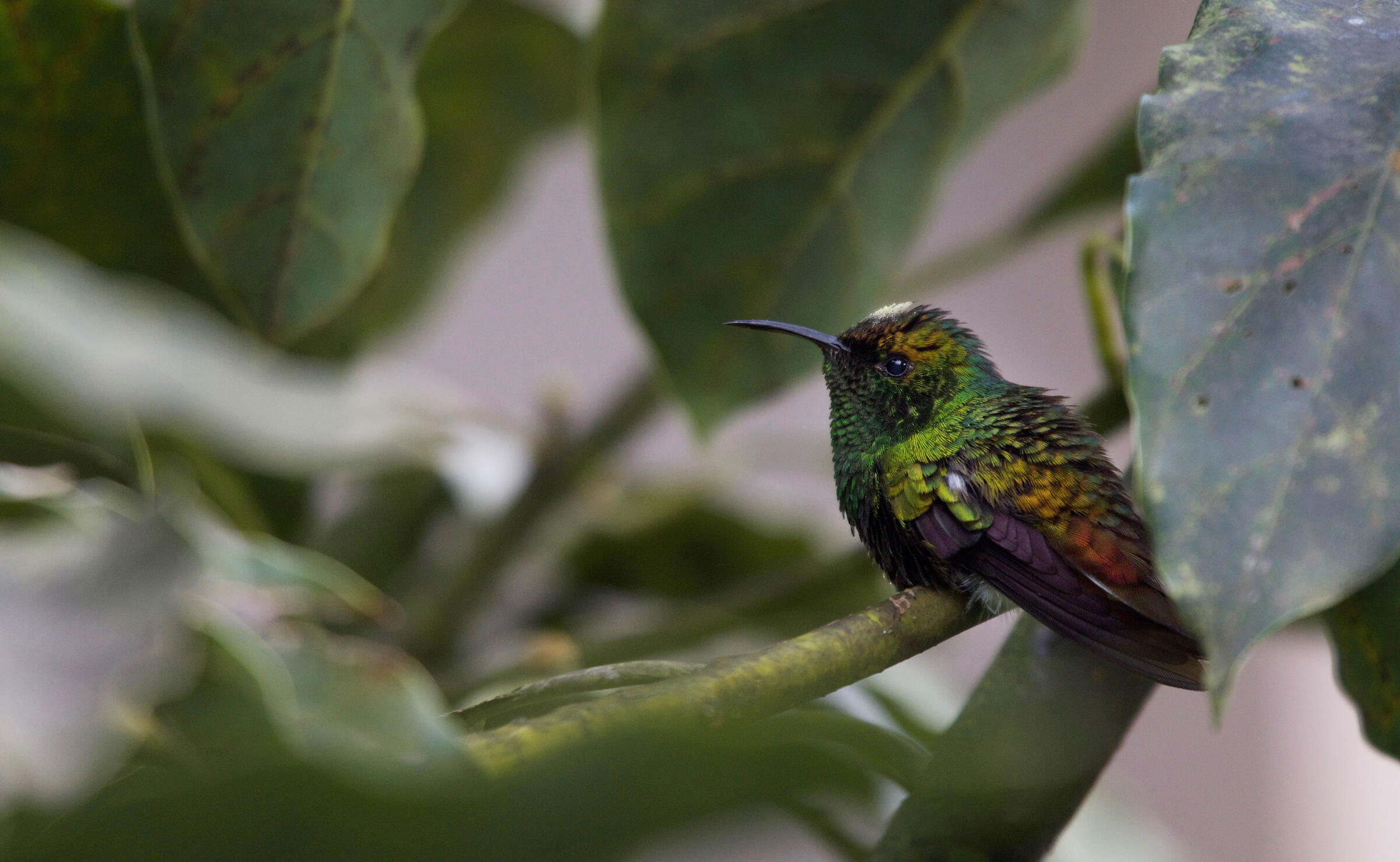 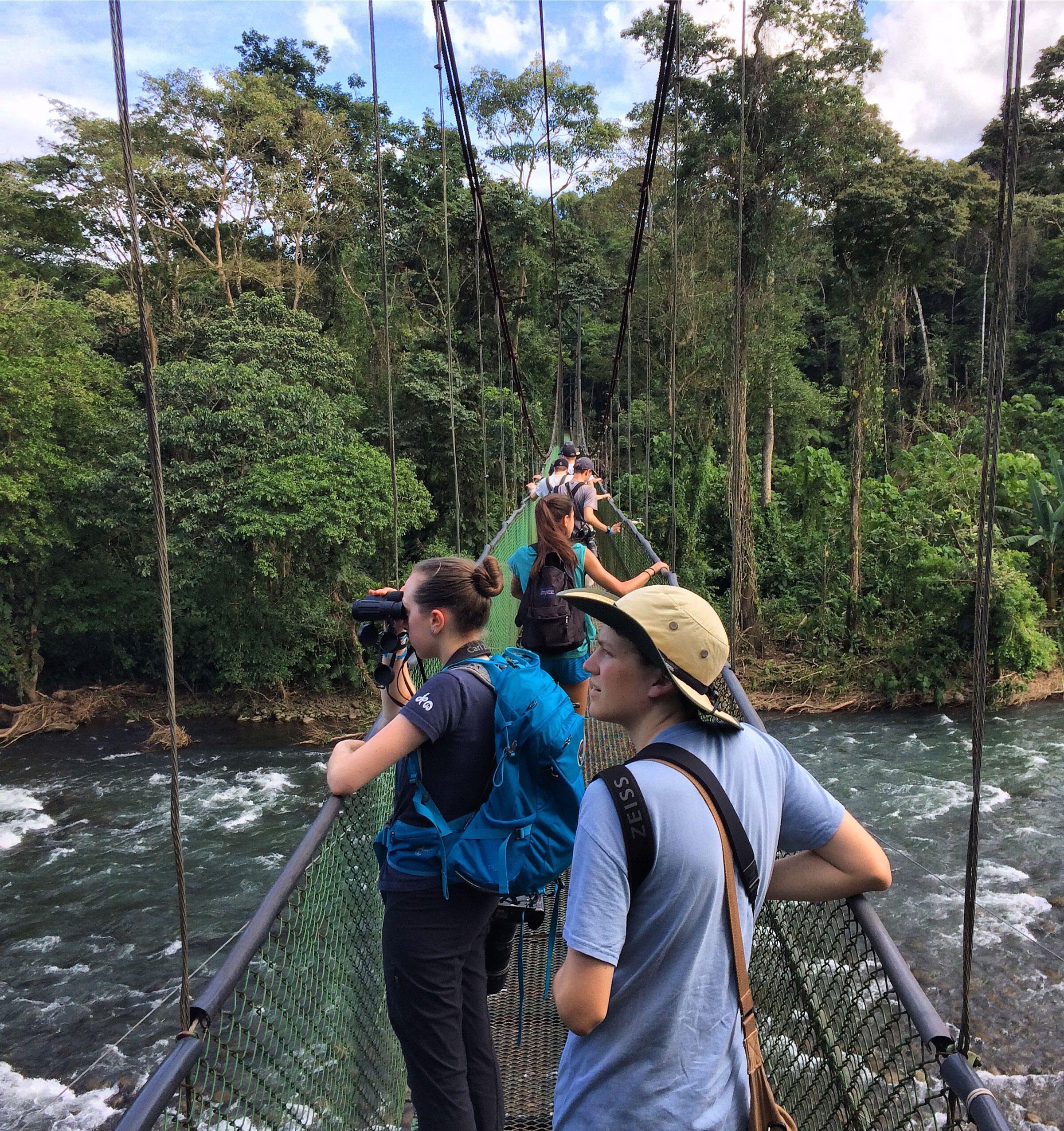 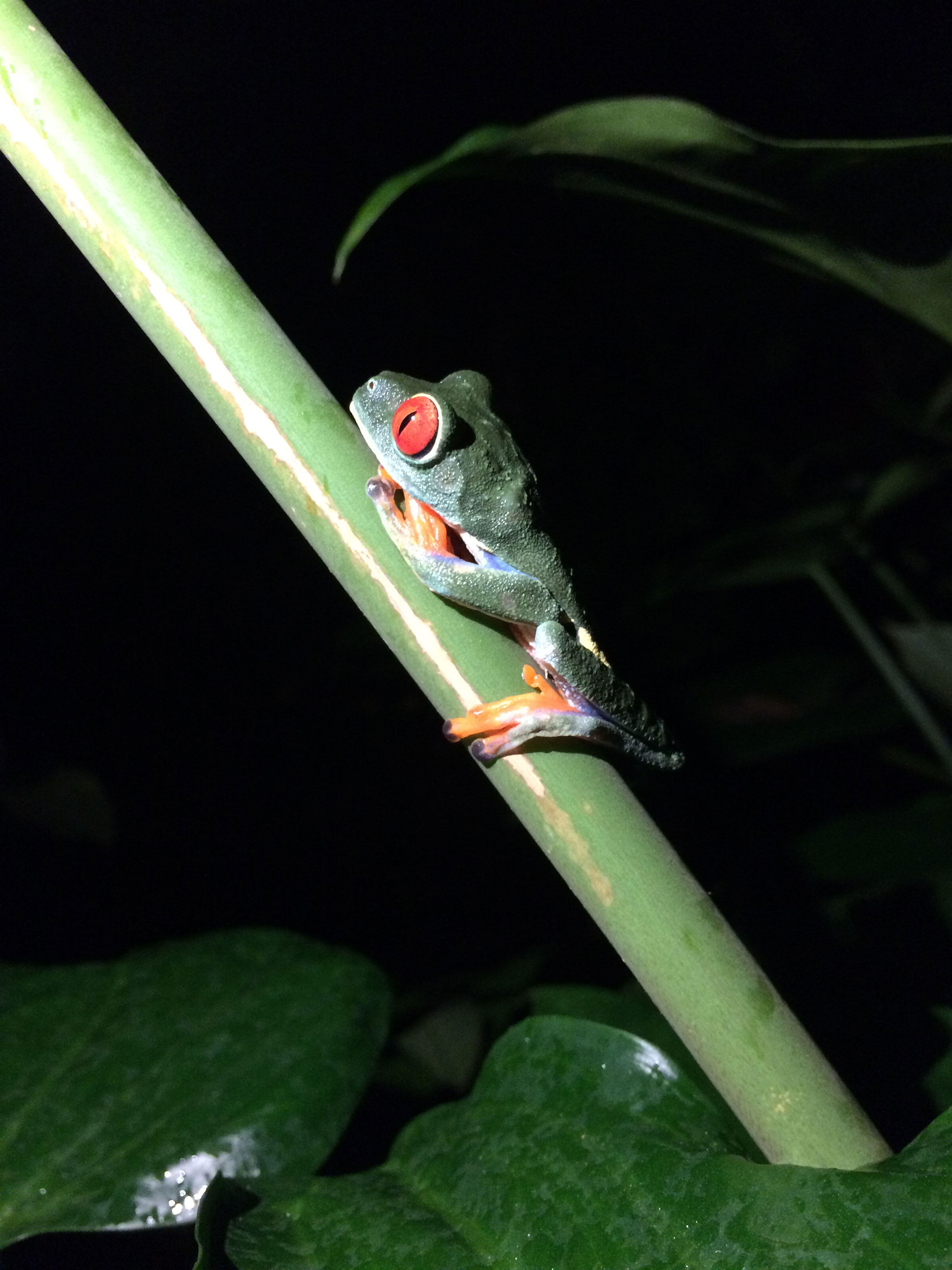 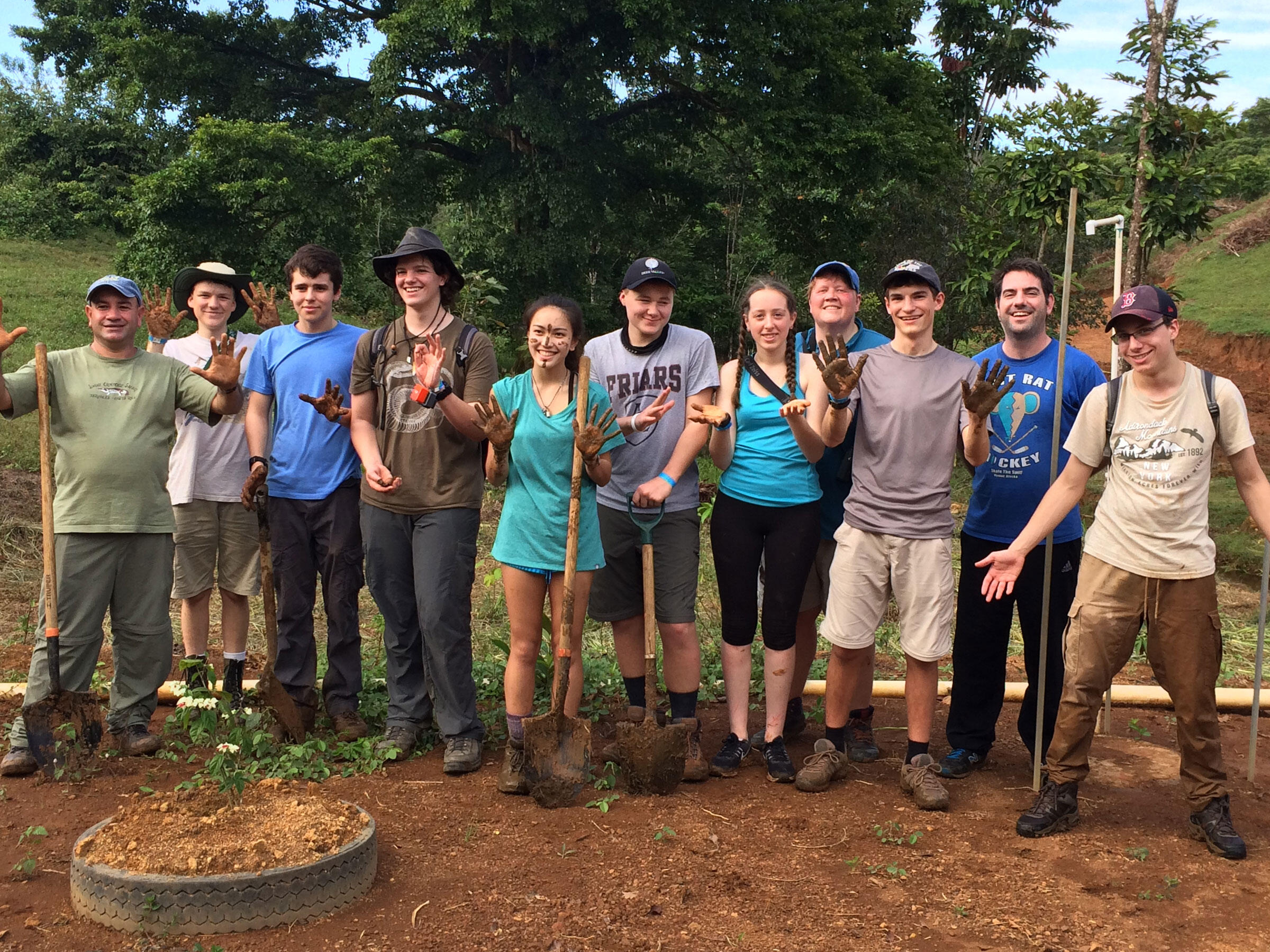 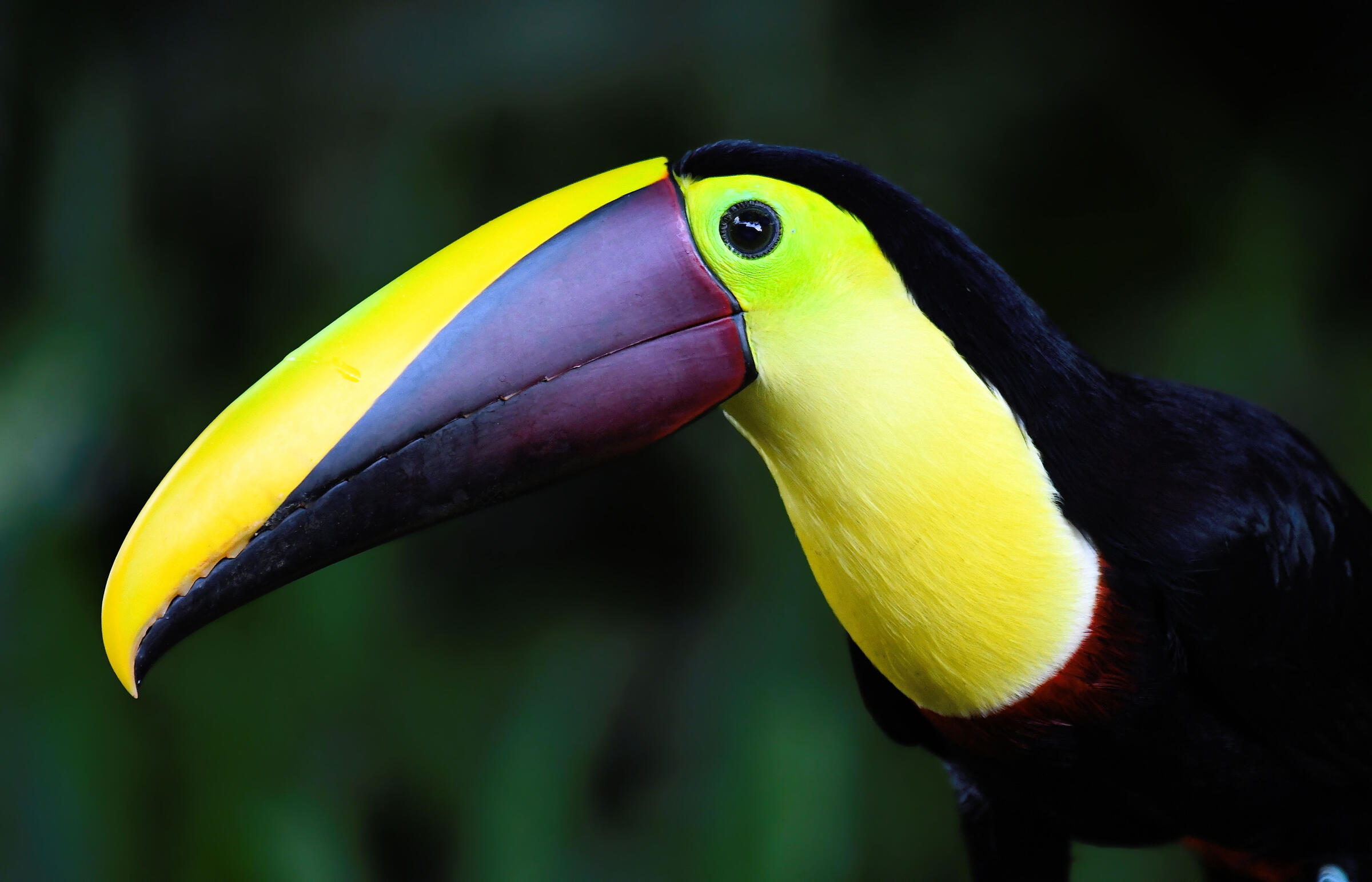 But things were looking up for the parrots during the visit: The crew saw the birds every day without even venturing deep into the forest. “I took that as a really promising sign that reforestation efforts and biological corridors are really working,” Matthews says.

The teens contributed to these reforestation operations themselves, taking an afternoon to plant cedars on land owned by a Costa Rican family growing white peppercorn. Fraser admits she was disappointed when she looked at the day’s itinerary. “That’ll be two hours of not birding,” she remembers thinking. “But it turned out to be great.” While working and learning, the kids still managed to sneak some good looks at the wild birds around the farm. In total, Matthews estimates the kids saw roughly 200 different species of birds.

Many of the teens intend to return to Costa Rica, and Hog Island wants to do so as well. Matthews and her colleagues are already planning this year’s trip, which they hope will take teenagers to a wider range of elevations and ecosystems. “Our kids were so good; they were wonderful birders,” Matthews says. “By the last day, we had almost exhausted what we could see.”

Their wish lists aren’t exhausted, though. Each teen had a dream bird they didn’t quite manage to find this trip—a Resplendent Quetzal for Miller, an Ornate Hawk-eagle for Ward, a Sunbittern for Fraser. But those will have to wait until their next great adventure.