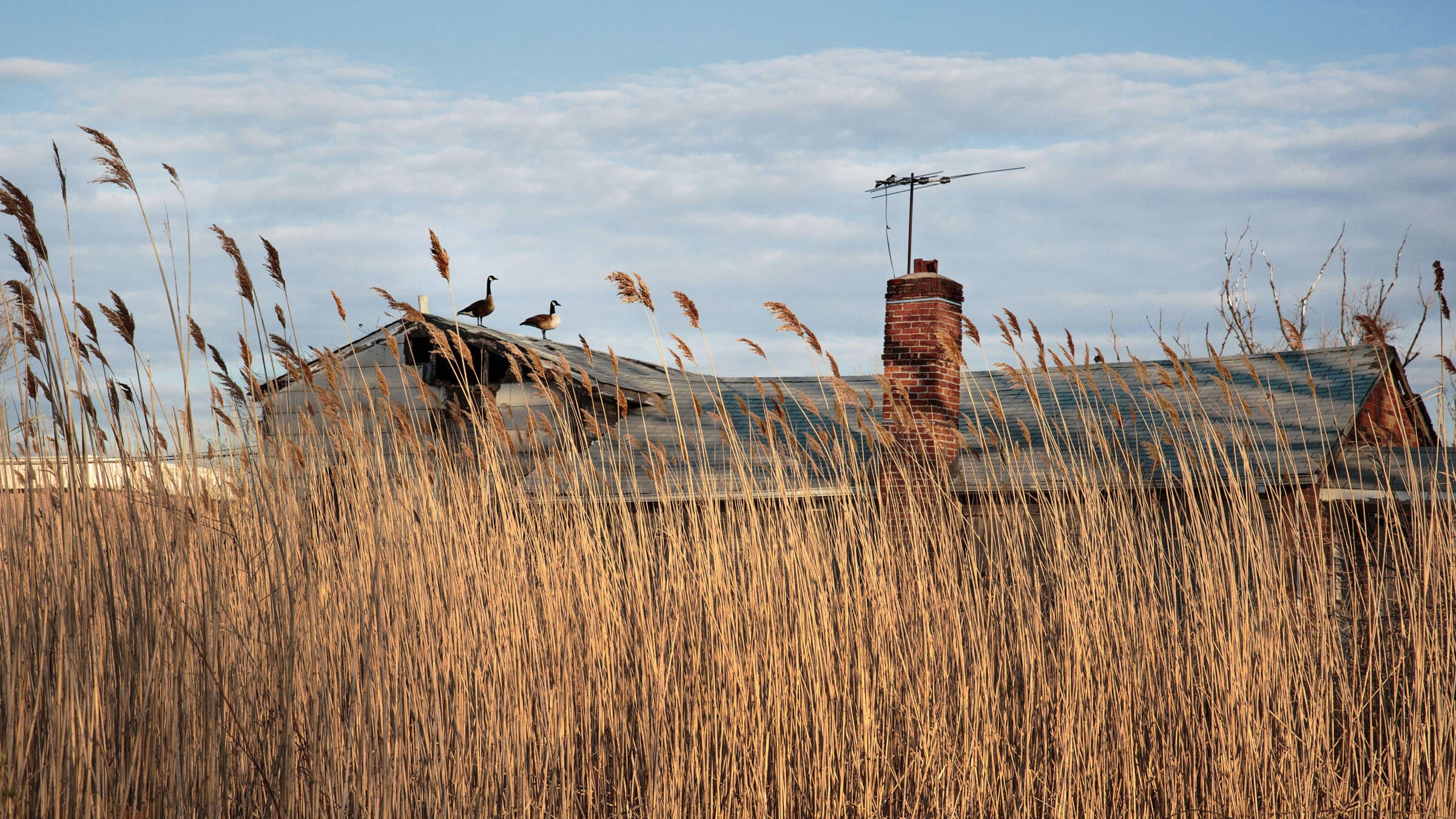 Four Years After Hurricane Sandy, One Neighborhood Gives Itself Back to Nature

A photographer captures a Staten Island coast in transition, as a mostly abandoned community returns to marshland.

On a frigid February day earlier this year, I found myself standing on a beach unlike any I had seen before. At first, Staten Island’s Oakwood Beach looked like any other suburban neighborhood; rows of quaint houses sat along a road leading through a marsh towards the sea. But something felt off, and I soon realized what was missing: people. When I looked more closely, most of those picturesque houses were deserted. Entryways with missing steps led to homes with broken windows, while tall grasses invaded flowerbeds and lawns.

I had hopped on a bus from Manhattan to Oakwood Beach that day in search of some fresh air and a little inspiration. Since then, the small coastal neighborhood, which is still recovering from Hurricane Sandy, has entranced me. I’ve spent the past year visiting Oakwood Beach, meeting its remaining residents and photographing the landscape in transition as nature reclaims the abandoned land.

Each time I visit, the neighborhood changes. My favorite house is now a leveled lot. The fence I hid behind to escape the wind is now a patch of dirt. The stoop where I rested to change my lens is now occupied by a flock of Canada Geese. 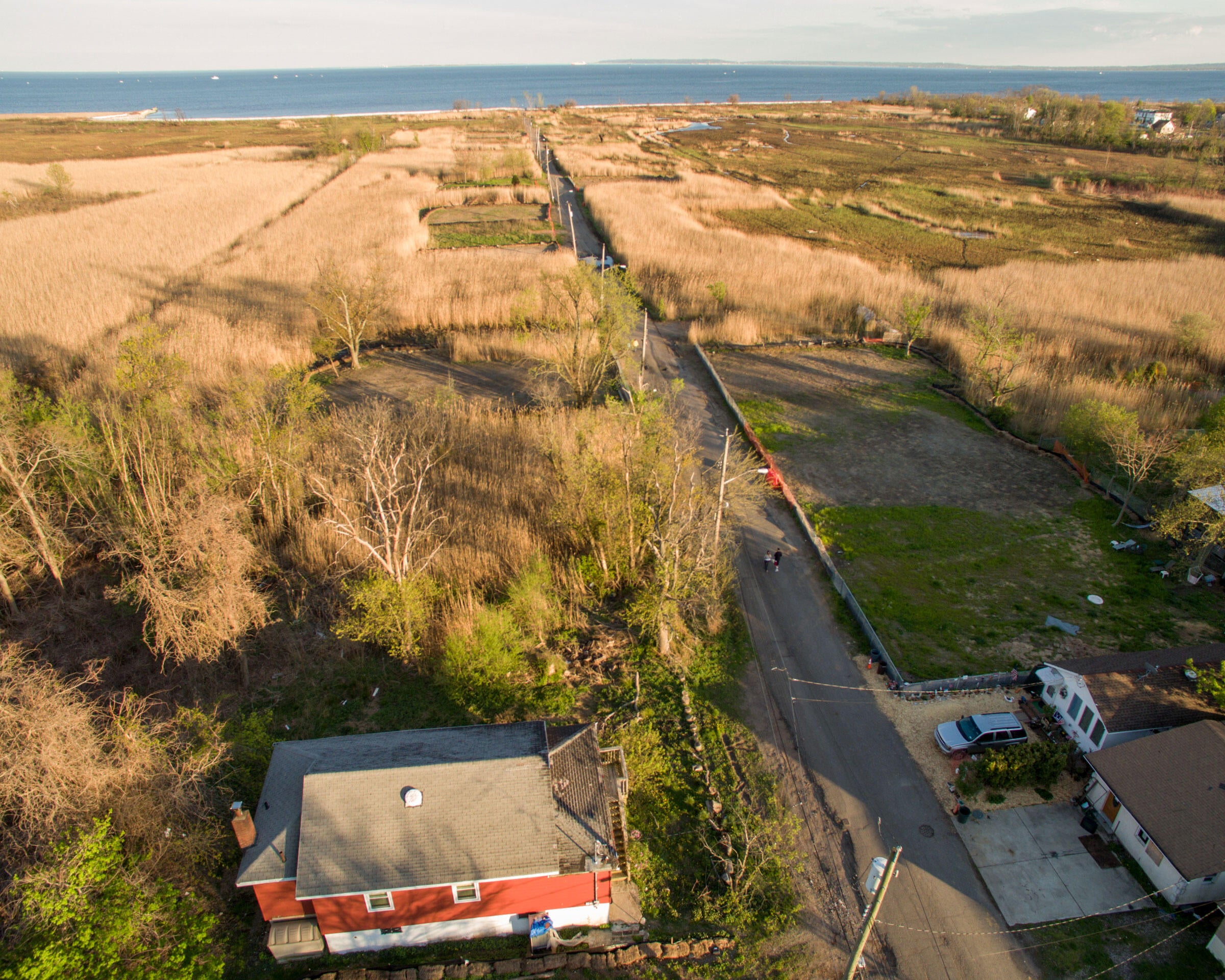 Nature threatened to take back Oakwood Beach for years before the hurricane. In the summer, wildfires spread through the marsh, and springtime flooding drenched the streets. Nonetheless, residents loved their beachside community and refused to move.

Then, on October 29, 2012, Hurricane Sandy slammed into the coast and everything changed. The storm surge flooded the neighborhood with 16 feet of water. Homes blew off their foundations, and three neighbors lost their lives. It was then that the people living in Oakwood Beach understood that it was time to leave.

Joe Tirone, a real estate agent who owned a house in the neighborhood, felt that it wasn’t safe for people to live there anymore. He hoped to convince the state to buy their property so they could move elsewhere. But first, he needed his neighbors’ consensus. After giving a presentation at a local meeting, “I asked how many people would be interested, and I was totally floored,” Tirone says. “The entire place—200-plus people—all said yes.”

Neighbors who participated in the buyout program sold their homes to the state of New York. City contractors are now demolishing the houses, leveling the land, and planting native marsh grasses, flowers, and shrubs. To date, the state has bought 299 homes in Oakwood Beach for $122.1 million.

But 12 neighbors refuse to take the buyout, even as houses are torn down around them. Among them is Franca Costa, an executive legal secretary who rescues shelter dogs and walks them along the beach every morning. Instead of leaving, Costa decided to rebuild her home, which is now closer to the water than any house on her street. Native marsh plants grow on those seaward lots, forming a natural barrier between her house and the ocean.

“Who would want to leave this?” Costa said as we walked along the beach one morning. “I love this life. Why would I want to take a buyout and leave—and do what?” 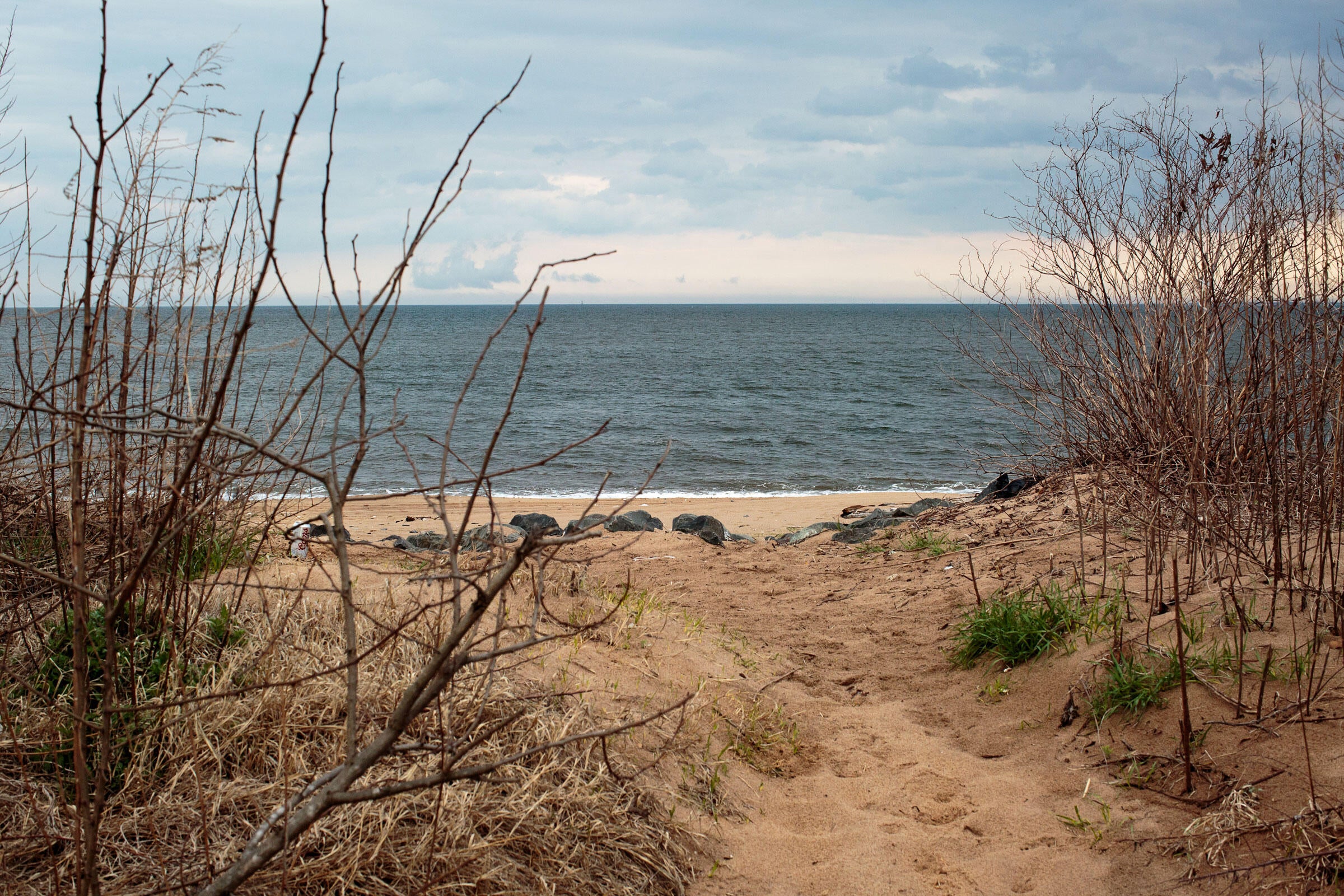 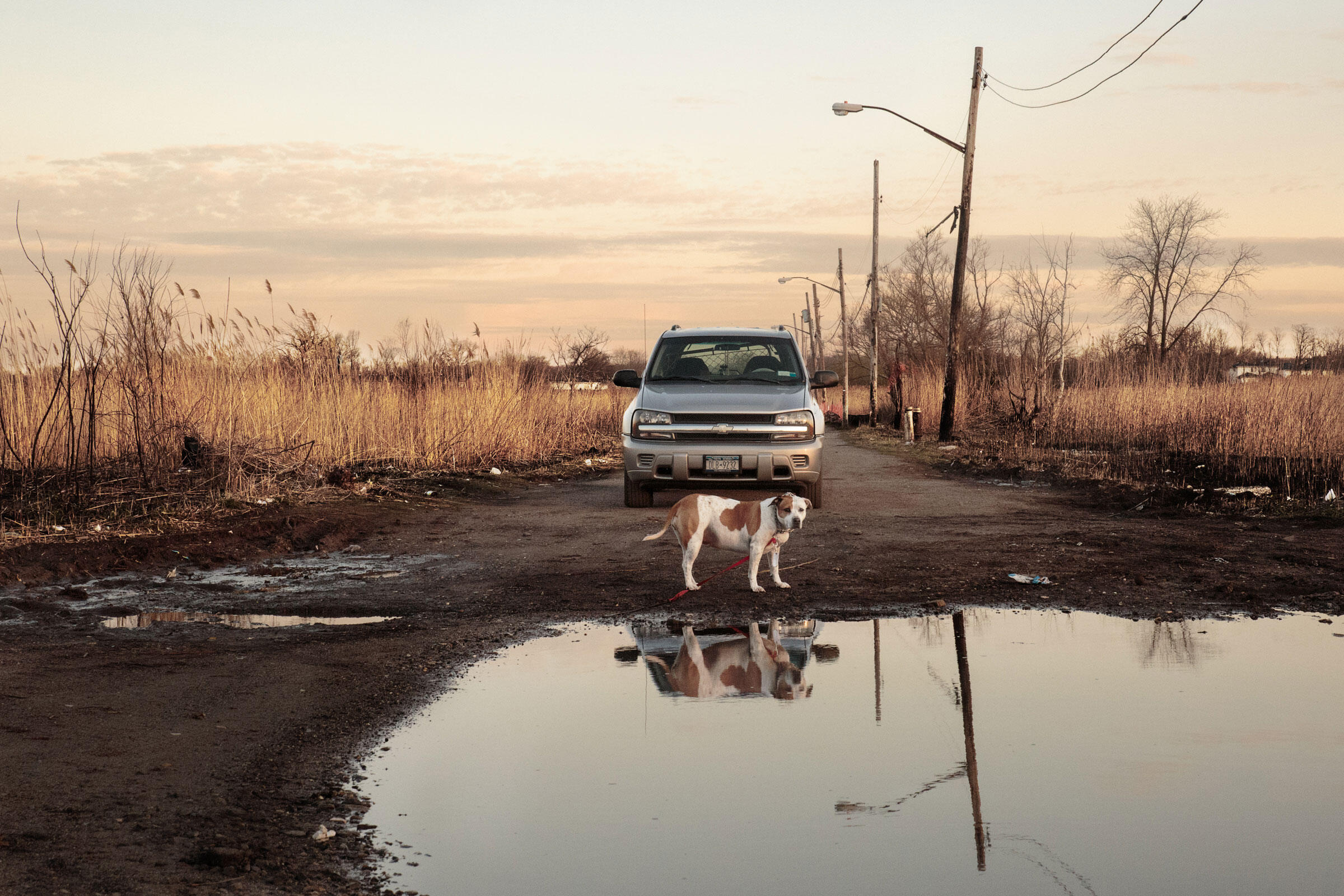 One reason to take the buyout is that as long as she stays close to the sea, Costa lives in danger. Today, two ten-foot walls protect Oakwood Beach from storms and flooding. But those walls will not stop a superstorm like Sandy from coming inland, and as the climate warms, they will certainly be insufficient. By 2100, sea level is expected to rise up to six feet in the New York City area.

To prepare for climate change, two solutions are underway to protect Staten Island’s coastline from future storms. The New York City Department of Environmental Protection is expanding its Bluebelt, a series of manmade wetlands planted with native greenery that will absorb excess stormwater, filter it, and deliver it to the ocean. At the same time, the U.S. Army Corps of Engineers is building a buried seawall, a massive stone structure covered in sand that's designed to protect inland areas from 15-foot-tall storm surges. Construction of the $571 million project, which will line 5.3 miles of Staten Island's coast, is expected to begin in 2019 and be completed in 2022.

Both projects require Oakwood Beach land, which they won't have until Costa and the other remaining inhabitants agree to sell their homes to the state. 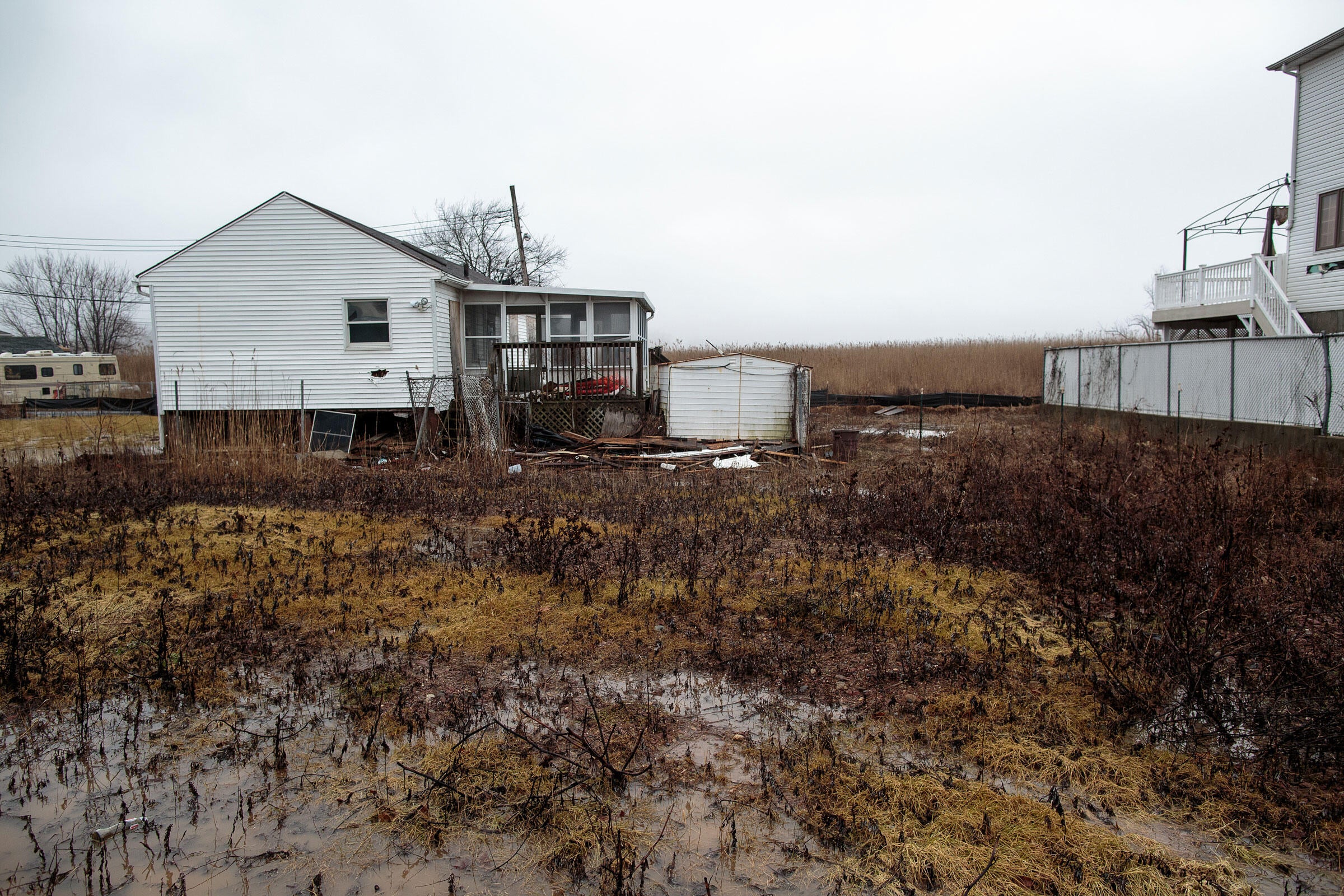 A puddle from the previous night's rain gathers in the yard of a water-damaged house, returning the land to the marshland it once was. February 24, 2016. Photo: Hillary Eggers 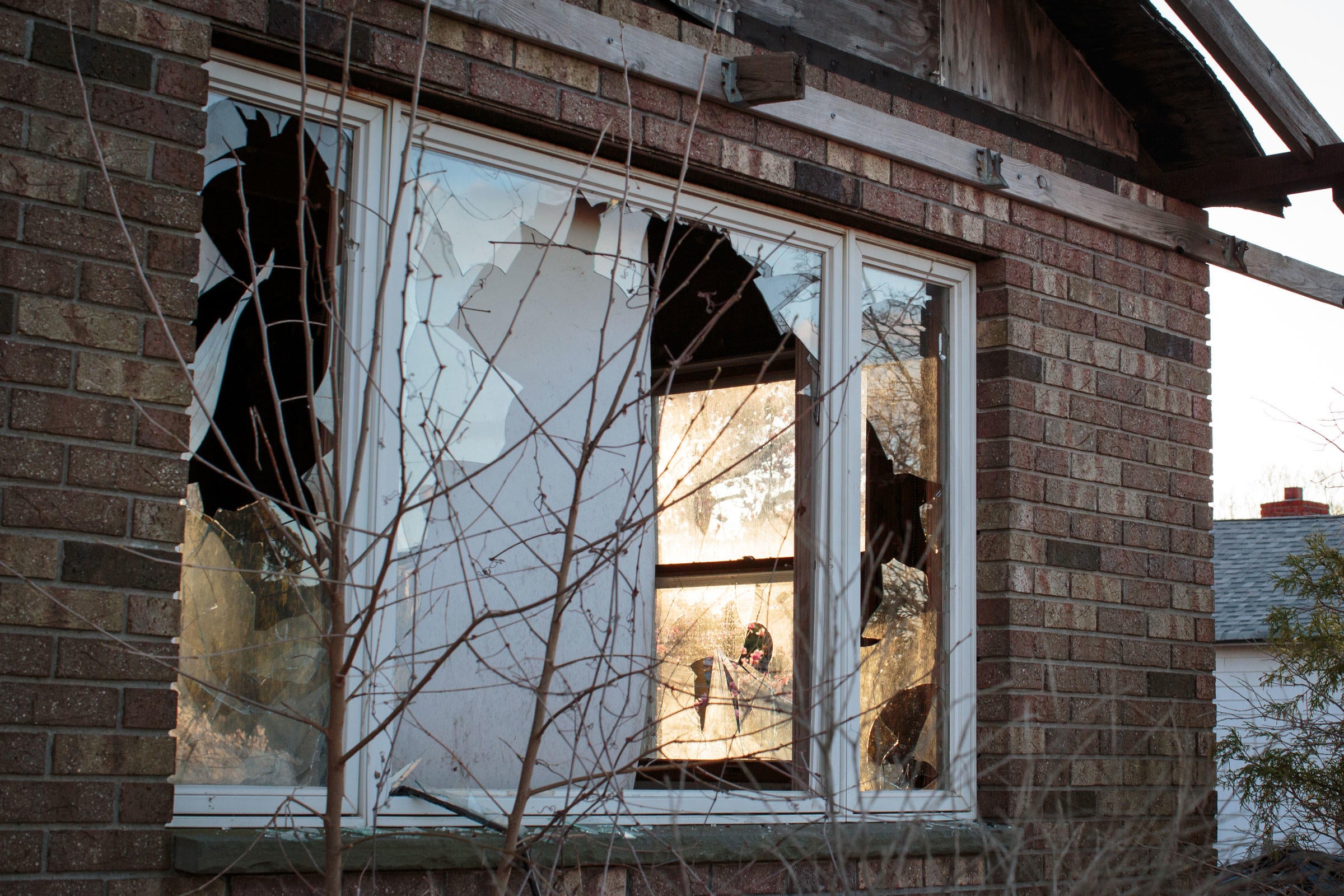 Nature, of course, doesn’t have to wait. The marsh is growing back where demolished houses once stood, and it now forms a natural buffer between the town and the sea. As a result, Oakwood Beach has turned into an unplanned experiment in managed retreat, the idea that people should abandon the coasts and give hazardous coastal habitats back to nature. To some, retreat looks like the best option to keep people safe, especially as scientists doubt that seawalls are effective protection and concerns about rising seas grow.

“Water will flow wherever it can; concrete walls, roads and houses will not stop it,” wrote Lisa Bova-Hiatt, the executive director of New York Governor Cuomo’s Office of Storm Recovery, in a statement to Audubon. “Managed retreat moves people and property out of harm’s way and allows the reestablishment of wetlands. The natural wetland buffer protects the upland communities and absorbs water, which it wasn’t able to do when the area was densely populated with homes.” 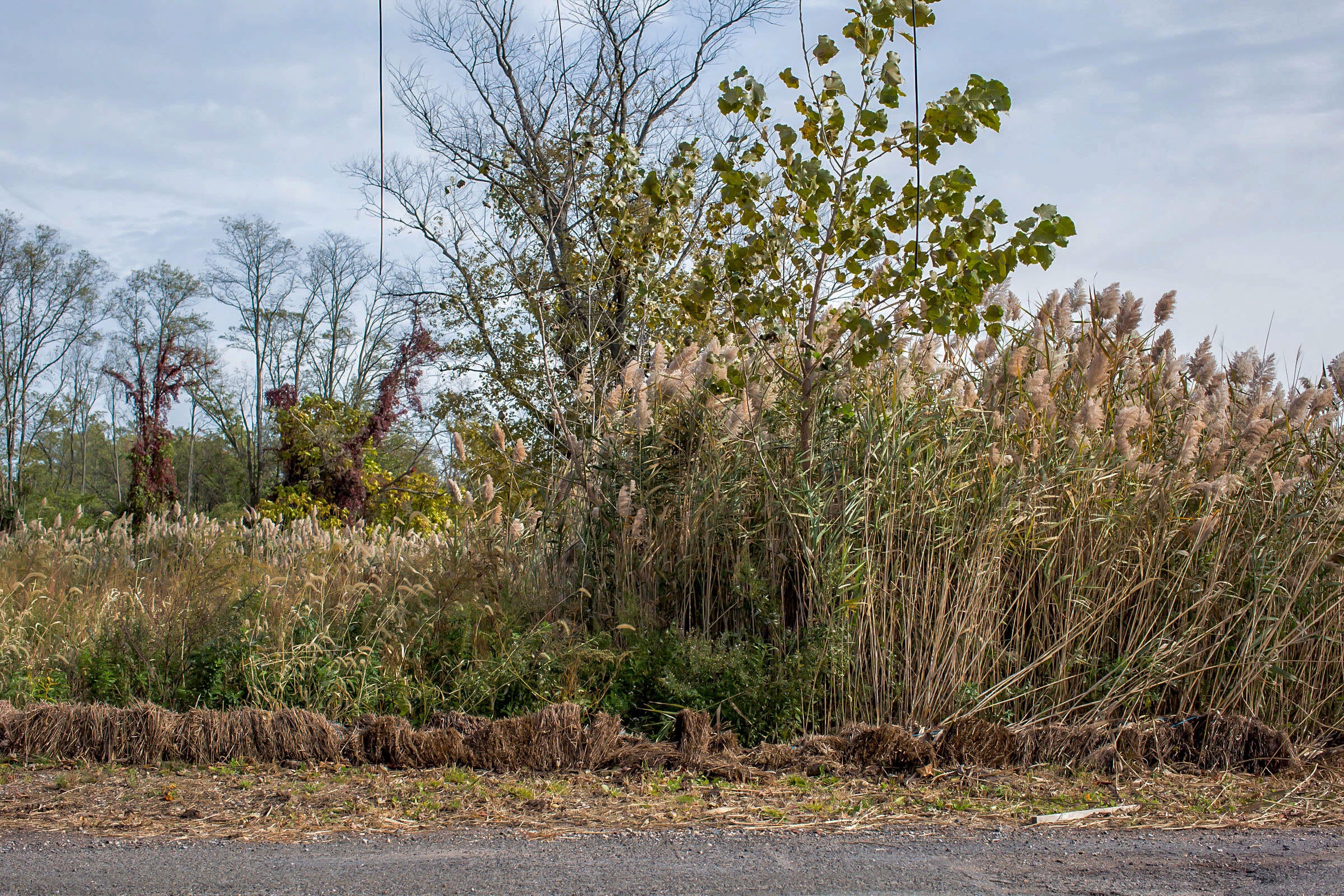 Two adjacent lots in different stages of regrowth: one demolished last year (left), and the other swept away by Hurricane Sandy (right). October 29, 2016. Photo: Hillary Eggers 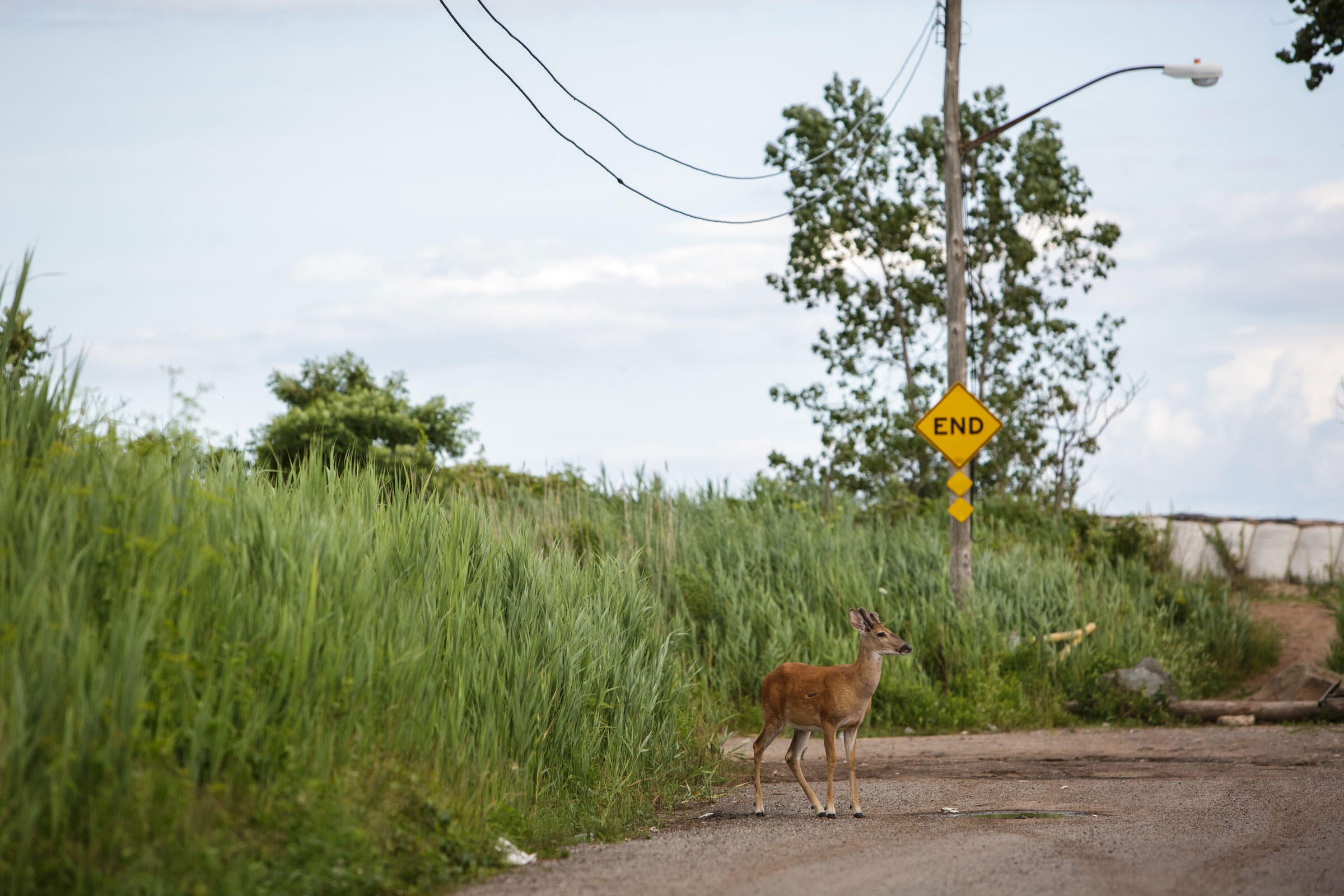 When I returned to the beach on the four-year anniversary of Hurricane Sandy this Saturday, the atmosphere was beautifully eerie. The wetlands are growing back seemingly unharmed after decades of development. House Sparrows played in the air above me, and a Great Blue Heron flew across the now-fenceless lots. As I stood alone and remembered the tragic events that happened there, I wondered whether letting nature take its course was the best option. Maybe this is how the coast is meant to be—an area too hazardous for people, yet a haven for birds and other wildlife.

Oakwood Beach is one of countless coastal towns facing the same difficult decision: Do we stay or do we go? In most places, people are digging their heels in, raising their homes on stilts, and building walls. But maybe Oakwood Beach can serve as a different kind of model—one that exemplifies nature’s adaptability and resilience, and shows that sometimes what looks like surrender is actually change for the better. 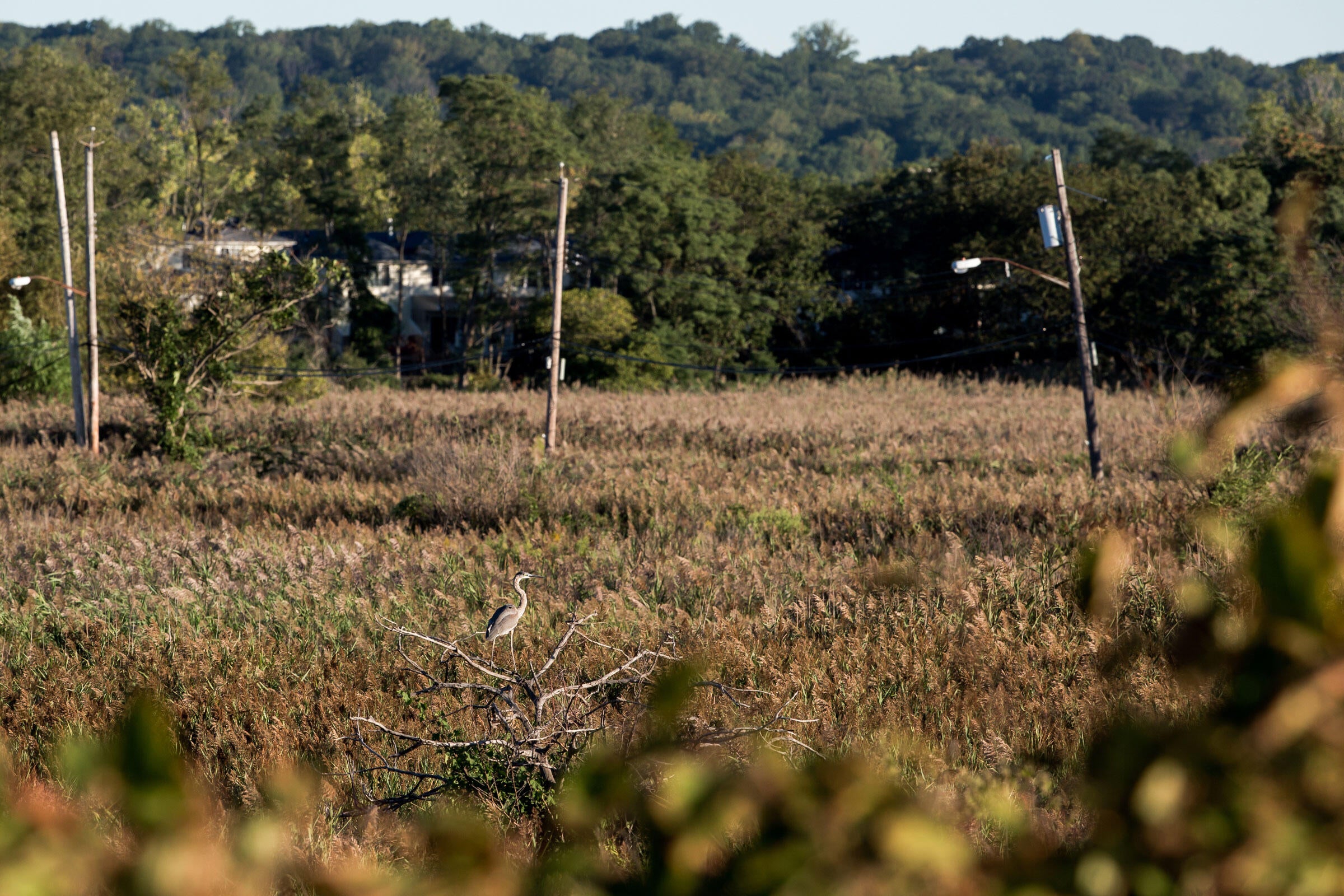