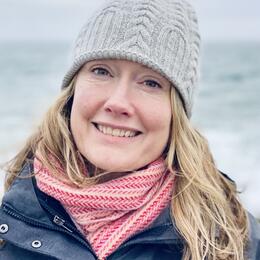 Twenty-five years ago, I experienced my first clear sighting of a bird through a pair of binoculars. It was a male Blackburnian Warbler, and he was spectacular. I marveled at the beauty of the flame-orange feathers on his head and throat and how they contrasted so vividly with his little black face mask. It was the peak of spring migration, and I was in a small woodlot behind the suburban community college in upstate New York where I was a part-time student. That afternoon in Ecology class, I was given a pair of binoculars and a field guide and instructed to inventory the birds on campus for a lab assignment. I was no birder at that time, but there was no mistaking the Blackburnian Warbler for anything else in that field guide. All these years later, how I felt seeing that bird is still so fresh in my mind because that Blackburnian Warbler was my “spark bird”—the species that triggered a lifelong passion/obsession for birds. I didn’t realize it then, but that moment would profoundly alter the trajectory of my life.

Fast forward to March 2022—I’m in Colombia, the “country of birds”, with my Audubon Americas colleagues, and we are squeezing in some morning birdwatching before another day of meetings. Much to my delight I see a Blackburnian Warbler in a nearby tree!  In that moment, I felt like my life had come full circle. I’d spent the years since that first Blackburnian Warbler encounter working to support bird conservation in eastern North America, but it was time to zoom out. WAY OUT. Blackburnian Warblers breed across the southeastern Boreal Forest of Canada and south into the mixed coniferous-deciduous forests of the Appalachian Mountains in the eastern United States, but they spend the other half of the year in northwestern South America. And they’re not alone. Every fall, 3 to 5 billion birds emerge from the Boreal Forest to migrate to wintering destinations. More than a billion birds will migrate to South America, with the bulk of them settling into the five countries that comprise the tropical Andes for the winter, including Bolivia, Colombia, Ecuador, Peru, and Venezuela. Nearly another 2 billion birds rely on Central America and the Caribbean to sustain them each winter. And while approximately 1.2 billion boreal birds spend their winters in the United States, the sheer numbers that migrate further afield is a stark reminder of why we must think beyond our backyards when it comes to bird conservation.

The Audubon Americas program focuses on conservation efforts at the hemispheric scale to ensure that the places birds need to survive throughout the year are protected. In Canada’s Boreal Forest biomeoften referred to as North America’s “bird nursey”—we are working to elevate public support for tens of millions of acres of proposed Indigenous Protected and Conserved Areas that would support 30–90 million breeding birds each year. We are targeting another 25 million acres of important bird habitat in Latin America and the Caribbean, with a primary focus in Colombia, Chile, Panama, and Mexico. This is good news for the Blackburnian Warbler and the hundreds of other species that rely on boreal and tropical systems throughout the year, such as: Olive-sided and Alder Flycatchers; Eastern and Western Wood-pewees; Semipalmated Plover; Lesser Yellowlegs; Broad-winged Hawk; Gray-cheeked and Swainson’s Thrushes; Bay-breasted, Canada, and Blackpoll Warblers; and Black-billed Cuckoo. This is particularly relevant in light of a 2019 Science publication that reported bird abundances in the continental United States and Canada declined by a staggering 3 billion birds since 1970, and that one-third of those losses occurred among birds that breed in the Boreal Forest. Many studies have documented that habitat conditions during winter and migration are linked to reproductive success during the breeding season. This “carry-over effect” can be magnified for species that experience poor winter habitat conditions and also have a significant proportion of their population in that locale, particularly if alternative habitat is not available. That makes understanding the migratory connections that birds make throughout the year—knowing where they breed and winter, as well as the stopover habitats they rely on during migration—critical to achieving effective conservation outcomes because that knowledge can be used to inform decisions regarding the best allocation of conservation dollars.

The establishment of Protected Areas is a key strategy being employed by Audubon Americas to support our vision of full life-cycle bird conservation. These efforts protect not only neotropical migrants but also the astounding array of endemic bird species that can be found year-round in the southern hemisphere. South America boasts 2,456 resident species alone! Protecting important bird habitat across the hemisphere is critical because Canada’s Boreal Forest and the tropical forests of Latin America face similar threats to biodiversity, primarily in the form of deforestation and degradation for resource extraction. This includes logging, mining, oil and gas production, and the damming of wild rivers for hydropower. Agricultural expansion is another major factor contributing to land use changes in Latin America and has been attributed to considerable declines in tropical biodiversity. That’s why Audubon Americas Working Lands program is partnering with farmers to promote sustainable agriculture practices on 12 million acres to increase habitat on working lands and provide connectivity within these landscapes. While in Colombia, I had the opportunity to visit a prime model of sustainable agriculture, El Hatico Ranch in the Cauca River Valley, which lies between the Western and Central Andes. I was amazed by the sheer beauty of the place and the bird life that abounded on the property, which contrasted sharply with the endless fields of sugarcane that comprise much of the once forested river valley. In the 1970s, the owners of this ninth-generation family farm began experimenting with a silvopastoral system, where high densities of trees and shrubs are interspersed with forage crops for grazing. The change proved profitable—in the years since, they have seen increases in their cattle’s milk production and the number of cattle their farm can support. The soil is richer, and the land has proven more resistant to the hot and dry weather that occurs in the region during El Niño years. Intensive silvopastoral systems also host twice as many bird species as conventional sugarcane farms and four times as many species as landscapes of open rangeland. And to top it off, intensive silvopasture systems are capable of sequestering far more carbon than traditional pasture systems, which helps to mitigate the effects of climate change, making it especially important for protecting not only birds but also the well-being of people. As the severity of extreme weather events become more frequent on our warming planet, protecting landscapes that pull carbon out of the atmosphere and store them in the ground is essential to safeguarding our future.

Protecting important bird habitat often goes hand-in-hand with protecting huge carbon storehouses, such as can be found in the extensive peatlands of Canada’s Boreal Forest and the tropical forests of South America. Indigenous communities in Canada, Latin America, and the Caribbean are leading ambitious protected area initiatives that will benefit biodiversity and carbon systems as they seek to protect their ancestral lands from deforestation through the formal recognition of their governments and land rights. Indeed, there is much to be hopeful about in terms of the work people are doing to protect the landscapes they love. This was evident during my trip to Colombia, where I had the great fortune to meet colleagues from across Latin America who are passionate about bird conservation and are working hard to employ innovative approaches to protect birds and their habitats. The work they’re doing and their dedication to the field was inspiring. But it was also uplifting, because the task at hand is immense and it will take more than one country or one institution to safeguard bird populations from further declines. It will require an integrated perspective collected from communities ranging from Canada to Chile that incorporates the voices of Indigenous peoples, farmers, academics, community scientists, government institutions, non-profit organizations, corporations, and scientists from both hemispheres to solve our burgeoning environmental crises. There is so much at stake beyond birds, but even if it were just for the sake of making sure the Blackburnian Warbler gets to make its annual journey safely each year, it’s a goal well-worth working towards.