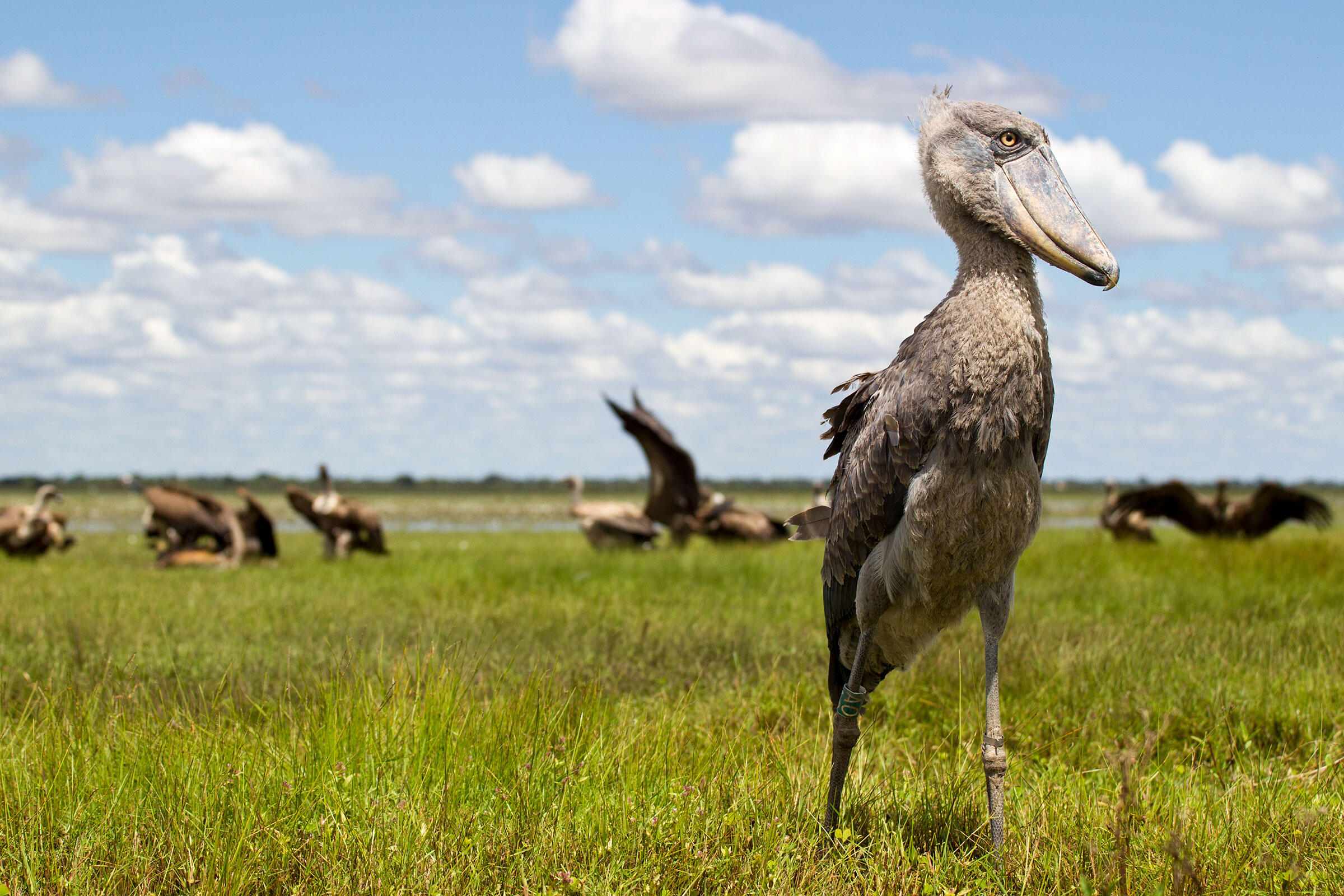 Live chicks can go for thousands of dollars on the black market. So dedicated locals have banded together to protect the birds and their nests.

It’s September in the Bangweulu Wetlands in northeast Zambia, and the epic rains that annually flood the vast plains and grasslands have retreated. Now all that remains of the floodwaters are shimmering lagoons and an intricate network of tranquil waterways rich with nutrients that snake around thickets of reeds and marshland.

On a small swampy island, a pair of large, gawky birds—one male, the other female—stretch slate-coloured wings. These birds, both almost four-feet-tall, are Shoebills. Close relatives of pelicans but stork-like in appearance, Shoebills get their name from their clog-shaped bills. The pair is now building their nest by using these improbable implements to grab at hefty clumps of reed and papyrus.

The birds place their gathered nest materials on top of a 10-foot-wide platform they built earlier, and then stomp and flatten them into a three-foot-wide platter. With some luck this floating nursery will soon be home to one, and possibly two, chalk-white Shoebill eggs.

Unbeknownst to the parents-to-be, a man watches from a canoe a short distance away. He is Junior Chisabi, a local fisherman with intimate knowledge of the lush wetlands. Chisabi takes notes—recording the nest’s GPS coordinates as well as its size—before quietly paddling away. He’ll be back later to check again on the nest, keen to see if eggs were laid and also to monitor any signs of human disturbance.

Monitoring and guarding enormous floating nests is not part of a typical fisherman's job. “I always looked at the Shoebill as just a bird and of no importance and value,” he says. “I did not realize that it could provide employment for me in Bangweulu. But here I am now, working and earning a salary because of it.” 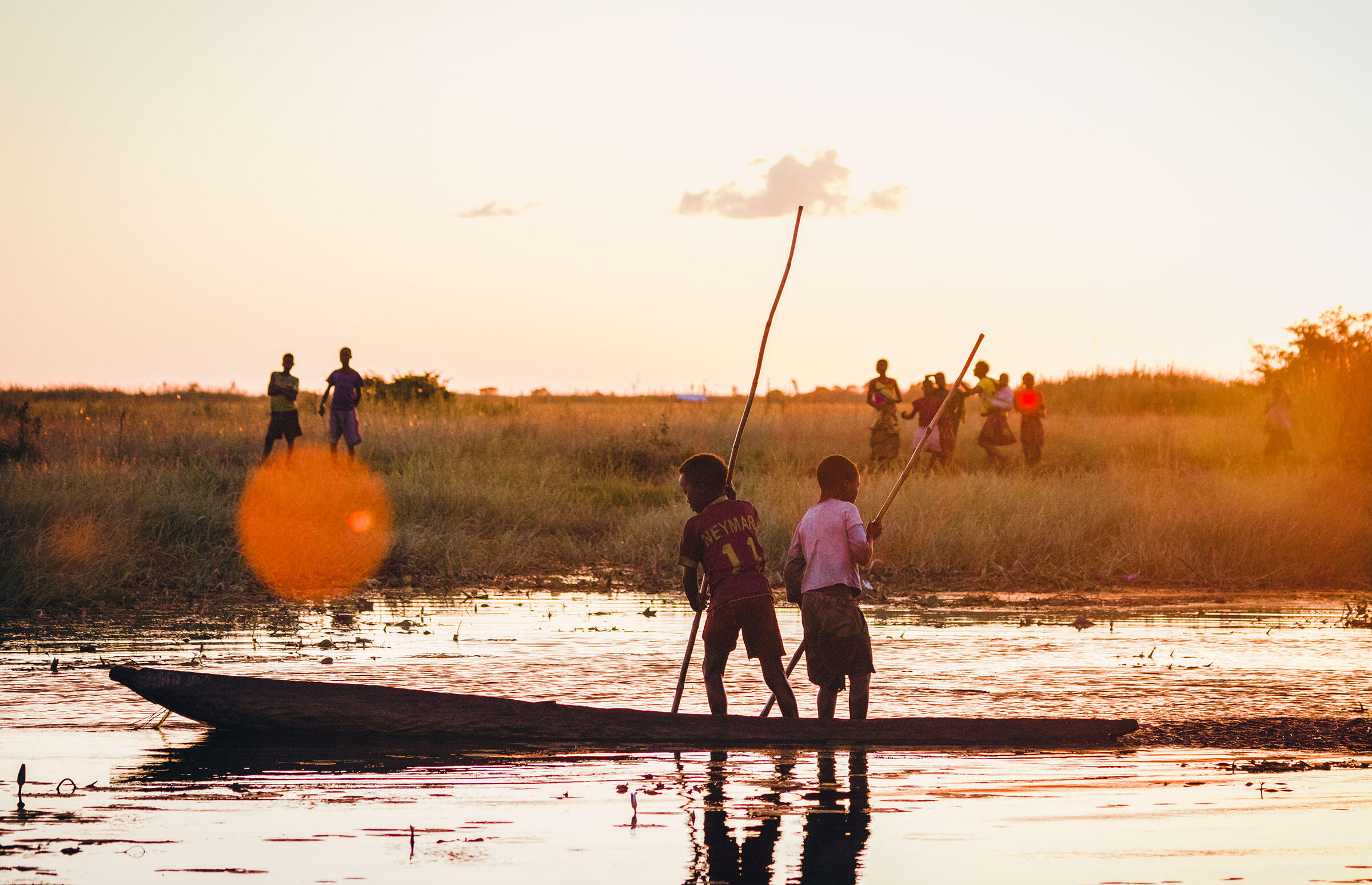 That’s because it’s not only Chisabi who is interested in Shoebill nests. Their eggs and chicks are profitable targets for poachers supplying the illegal live-bird trade. In Saudi Arabia and Dubai, enthusiasts are reported to pay more than $10,000 to add a Shoebill to their collection. But breeding Shoebills in captivity is incredibly difficult. Only two have ever hatched—one at Parc Paradiso, Belgium, in 2008, and the other at ZooTampa, U.S.A., in 2009—which puts constant pressure on a diminishing wild population to meet the demand for these rare, prehistoric-looking birds.

Shoebills are endemic to Africa and live only in remote marshy places. BirdLife International and the International Union for Conservation of Nature (IUCN) classify the birds as vulnerable to extinction, and they survive in only a handful of countries: South Sudan, home to the continent’s largest population of some 5,000 birds, the Democratic Republic of Congo, Rwanda, Tanzania, Uganda, and Zambia. That makes the 100-or-so Shoebills at Bangweulu Africa’s second-most important population.

Besides the threat presented by poachers, fires and human encroachment also put the species at risk. Shoebills are shy birds, requiring large areas of undisturbed habitat in which to breed. When people get too close, spooked Shoebills desert their nests, leaving eggs and chicks vulnerable to water lizards, snakes, and eagles.

All these threats have hurt the species’ wild population. A 2016 population estimate by the IUCN suggested that 3,300 to 5,300 mature adults remain in the wild—down from between 5,000 to 8,000 mature adults in 2008. That fall is precipitous enough to make the survival of every egg and every chick count, which is where fishermen like Chisabi come in. During Shoebill breeding season, from September to December, a close-knit team of 12 fishermen monitor Shoebill nests, protecting the eggs and chicks. As well as being fishermen, they are also employed as Shoebill guards by African Parks, a non-profit conservation organization that manages Bangweulu Wetlands in partnership with Zambia’s Department of National Parks and Wildlife (DNPW). The partners established the Shoebill guard program in 2012.

While out fishing from their canoes, the men are also on official Shoebill patrol. Assigned specific nests to visit and monitor, each guard checks land around the nests for encroachment, recording any suspicious activity that points to the presence of poachers. If needed, the guards clear water channels around nest sites so that law enforcement units can access them more easily. They also record new sites and information about new nests and eggs, keeping a close eye on everything until the chicks fledge.

Their vigilance is paying off. Since 2012, when the program started, 25 chicks successfully fledged from 21 guarded nests. Six chicks, stolen from nests, have also been rescued from captivity and rehabilitated back into the wild. The success has led African Parks to expand the program: In 2012, nine men were employed as Shoebill guards; today there are 12; and over the next few years, African Parks aims to hire a team of 20 guards to cover the 2,317 square miles of wetland. Additionally, in 2017, three community development facilitators (CDFs) joined the program. They work with the Shoebill guards to check and verify their sightings and alert relevant anti-poaching units to any threats that arise. But their primary job is to raise awareness among local communities about the importance of the guards’ work protecting Shoebills.

Through outreach programs, CDFs help local communities understand how Shoebills bring in tourists, including many birders, whose presence provides employment with African Parks (the largest employer of local people in the region) and other income opportunities, such as guiding, selling local arts and crafts, and providing homestay accommodation. As people appreciate this, they too look out for the Shoebills, reporting suspicious behavior and avoiding disturbing the birds’ precious nests.

The role of communities in voluntarily protecting Shoebills is vital, says Jonathan Chisaka, African Parks’ Bangweulu Wetlands park manager. “There is a reawakening of the appreciation of the Shoebill,” he says. “Knowing it can bring income to boost their development is knowledge enough to encourage and motivate them to get involved in saving the species.”

It’s not just Shoebills that local people are protecting. They are a critical part of the conservation work carried out at Bangweulu. Six chiefdoms, comprised of around 50,000 people, co-own the land here. In 2008, after decades of poaching and over-farming had wiped out much of the wildlife and exhausted the land, it was the chiefdoms along with the Zambian Government that invited African Parks to assume Bangweulu’s management. 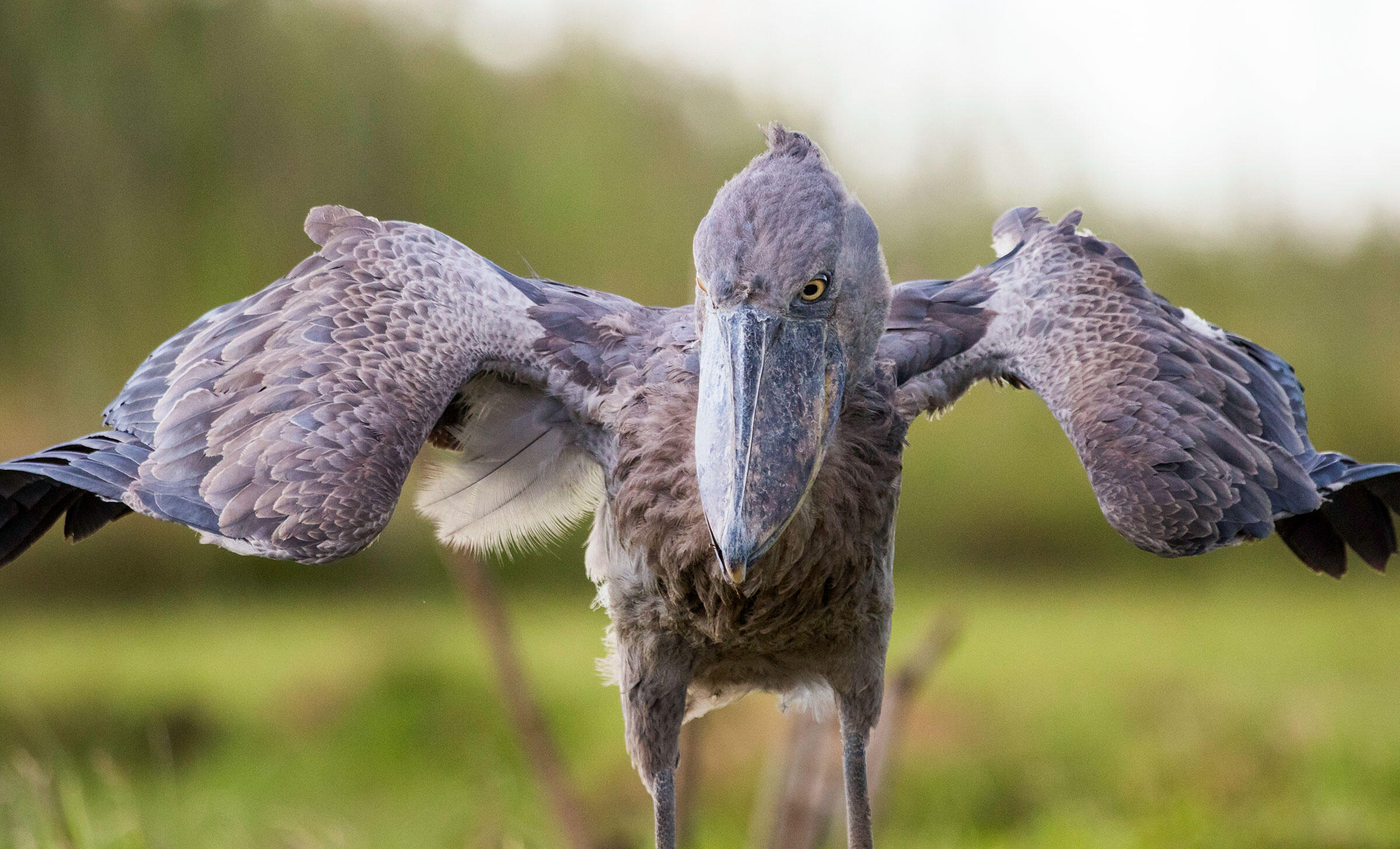 Since then, the chiefdoms, DNPW, and African Parks have worked together, co-governing the wetlands and restoring the area’s ecosystems. Poaching has been curtailed. And wildlife, including the endangered black lechwe antelope, which is only found at Bangweulu, has returned. Black lechwe numbers have increased from 35,000 to 50,000 in the past five years. Sustainable farming practices are being adopted, and fish stocks, which were dwindling, are bouncing back—good news for both Shoebills and fishermen.

Revenue raised from tourism benefits communities immeasurably. There are more jobs. Farming and fishing are profitable. And education and healthcare services, provided by African Parks, are a lifeline for people living in a remote area like Bangweulu.

The revival of these wetlands and conservation initiatives to protect their wildlife are essential for the people who share the waterways and their fish with Shoebills. Their futures are entwined, dependent on the birds’ survival in this incredible landscape where water meets the sky.

Audubon is a nonprofit, and stories like this are made possible by your generosity. You can support our journalism by making a donation today.

The Shoebill: Or, the Most Terrifying Bird in the World