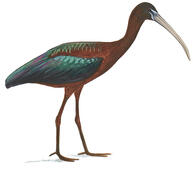 About the Birds: A recent transplant from across the Atlantic, the aptly named Glossy Ibis now occupies parts of the New World, especially Florida. Audubon’s climate models show the wading bird may expand farther up the East Coast as with additional warming. The Lewis’s Woodpecker, a Western species that lives in orchards, along rivers, and on recent burn areas, may see its range become much less stable. With its preference for old and diseased groves, climate change–induced forest die-offs may actually benefit the species. But then again, there’s also a strong chance increased wildfire may destroy that habitat entirely.

About the Artists: A self-taught painter, teaching artist, hair braider, and cultural organizer based in New York City, Kristy McCarthy paints under the moniker “D.Gale.” She utilizes art as a powerful tool to build community, raise awareness about social and environmental justice issues, and question the ways we interact with our environments. Kristy co-founded the Harlem Art Collective, which organizes and executes community art projects in her neighborhood of East Harlem, as well as Fiesta de Colores, an urban art festival that takes place annually in Manabí, Ecuador. The Glossy Ibis appealed to her because of its graceful disposition and beautifully colored plumage. “I wanted to gift a mural to the neighborhood that would be colorful, elegant, and visually appealing," she says.

Pelumi Adegawa is a freelance artist, muralist, and instructor born and raised in Lagos, Nigeria. She has traveled back there from her adopted home of New York to help teach art to young teens while painting murals in her free time. Her recent artwork focuses on historical and traditional subjects involving African culture, as well as her Nigerian-American background. Adegawa often creates a dialectic between former traditions and contemporary practices. “The woodpecker's dark, iridescent-green back in combination with its red face and belly really stood out to me,” she says of the Lewis's. “Although it is a small bird, the colors show boldness and strength.”