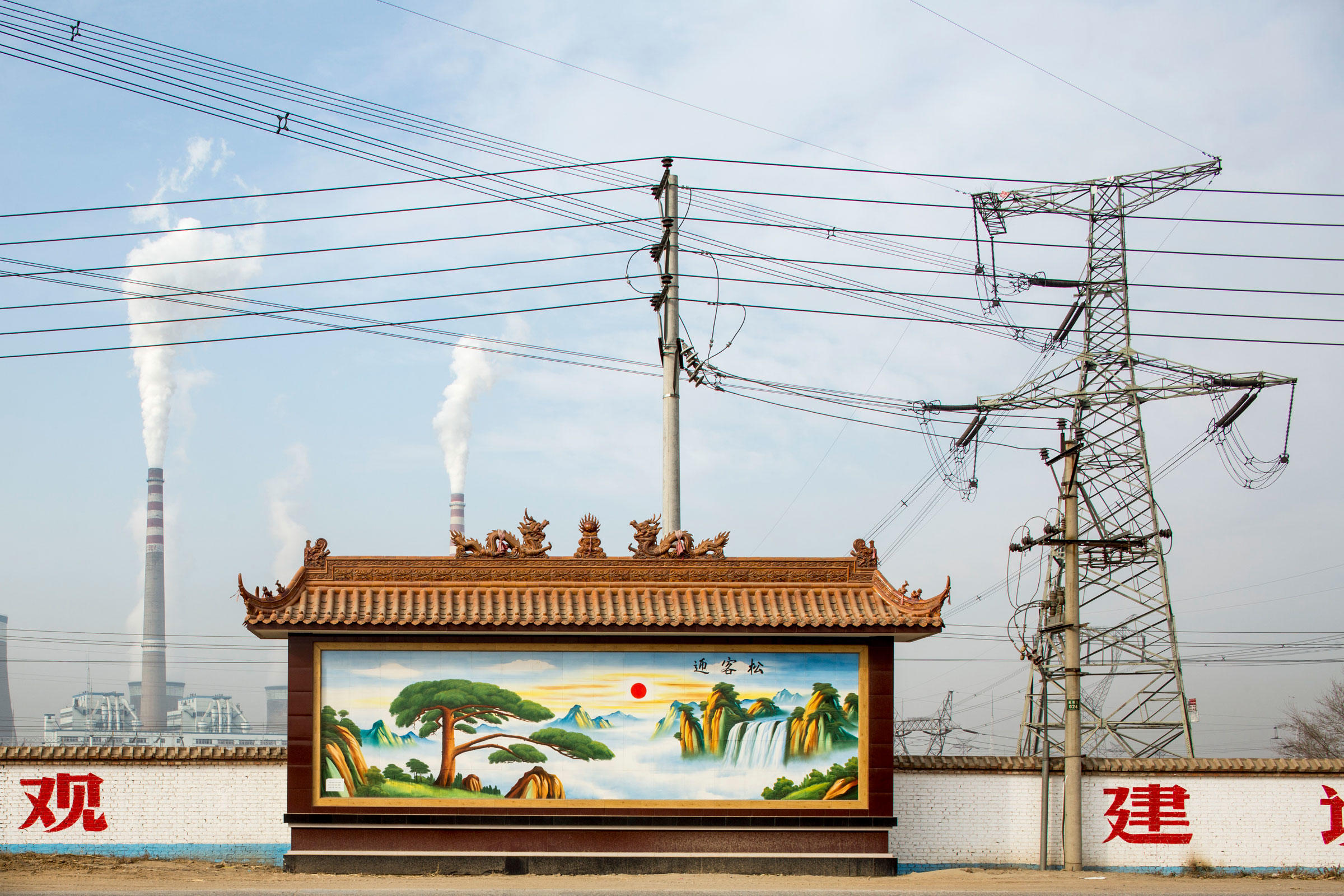 A painting of an idyllic Chinese landscape stands in front of smokestacks at Datong No. 2 Power Station in Shanxi Province, China. Photo: Paul Souders/Corbis

In the often-depressing fight against emissions, a recent report offers some promising news.

Coal still provides about 40 percent of the world's electricity, but it is "increasingly likely" that global consumption of the fossil fuel peaked in 2013, according to a new forecast based on recent trends in China, the world's biggest coal consumer, and the 11 other largest users.

An analysis by the Institute for Energy Economics and Financial Analysis released on November 15 showed that worldwide coal consumption is likely to decline 2 to 4 percent in 2015, despite near decade-low coal prices. That's on top of 2014's 0.7 percent decline, estimated in BP's World Energy Outlook.

"This new analysis illustrates that an epoch-defining shift is shaping the global outlook for coal," said Tim Buckley, the lead author of the report and IEEFA's director of energy finance studies for Australian and Asian markets, in a statement. "The global peak reflects a remarkable peak and decline in Chinese coal consumption."

Countries are following the Chinese trend, the report said. China, which uses half the world's coal, reduced its consumption of the fossil fuel by 5.7 percent in the 12 months through September. Other countries with declining coal use in 2015 were the U.S. (down 11 percent year over year), as well as Germany, the U.K., Japan, Canada, Turkey, Indonesia, Mexico and Russia. South Korea's coal consumption stayed flat. Among the biggest coal consumers, only India and Australia saw growth.

The briefing is one of a flurry of reports timed to the start of the Nov. 30-Dec. 11 Paris climate negotiations. China overtook the United States in recent years to become the largest contributor of global warming pollution, and its backing away from coal is seen as critical to the world's ability to reverse global warming.

The analysis attributed China's coal decline to an economic shift away from heavy industry and toward less energy-intensive sectors, as well as its rapid adoption of clean energy and a national outcry over pollution. In the U.S. and European countries, a combination of environmental policies, low natural gas prices and plunging renewable energy costs are beginning to shrink coal demand, the report said.

"I see this as technology-driven," Buckley told InsideClimate News. "Almost all analysts are projecting that solar and battery technologies are going to keep advancing rapidly, and that the deployment costs are going to drop probably more than 10 percent annually over the next decade."

Although India's use of coal is expected to increase, its large-scale investments in renewable energy are a step in the right direction, Buckley said, adding that India is in a position to bypass traditional carbon-based energy sources and leapfrog to renewable energy. Scientists have long raised concerns that as the world's population continues to grow and developing nations work to lift millions of people out of poverty, they will increase reliance on coal and cement a carbon-intensive future.

China, India and the U.S. account for about 70 percent of global coal consumption.

"With all three of [the largest coal consumers] now moving to rapidly implement aggressive policies to drive a sustained decarbonization of their grids, progress is assured," Buckley said.

In a recent analysis, the International Energy Agency estimated that global demand for coal would continue to increase over the next five years. But Buckley said the IEA’s forecasts were based on data from 2013, while his group's analysis took coal use from 2014 and the first nine months of 2015 into consideration. In addition, the IEA doesn't adequately account for government policy positions or clean energy cost trends, Buckley said. For example, solar costs are dropping by 10 to 20 percent each year in India, he said, and companies have invested $100 billion in solar projects there.

Laszlo Varro, the head of the gas, coal and power division at the IEA, said that the claim about IEA not including India's full solar investment picture in the agency's coal consumption forecasts, "is simply not true...The IEA medium term renewable projections are fully consistent with our coal projections as only the part of demand increase not covered by the growth of renewables will be covered by coal and gas, in India’s case primarily coal. In the Medium Term Renewable Market Report in India by 2020 hydro capacity expands by 12.7 GW, wind capacity by 26 GW and solar capacity by 25.3 GW. These very large renewable investments slow down the growth of coal."

"Our solar PV growth projections are lower than the official targets since due to various, primarily grid connection related issues the actual investment activity is slower, although still very significant," he wrote in an email.

Varro added that the IEA's forecasts were based on older data, and he said the agency was revising its estimates. "There is no doubt that the rapid growth of Chinese coal demand is over," he said.

However, Varro noted that because "per capita residential power consumption in China is still low, we don't think we have seen the historical peak of Chinese electricity demand yet. Given the importance of coal in the Chinese heavy industry (steel, cement, etc.) which is currently declining and with rebalancing could decline further, there is a very credible possibility that a combination of renewable investment and declining steel and cement production caused a peak coal in China. However, this is subject to a considerable degree of macroeconomic uncertainty and significant data revisions."

InsideClimate News is a Pulitzer prize-winning, nonprofit, non-partisan news organization that covers clean energy, carbon energy, nuclear energy and environmental science—plus the territory in between where law, policy and public opinion are shaped. Its mission is to produce clear, objective stories that give the public and decision-makers the information they need to navigate the heat and emotion of climate and energy debates.