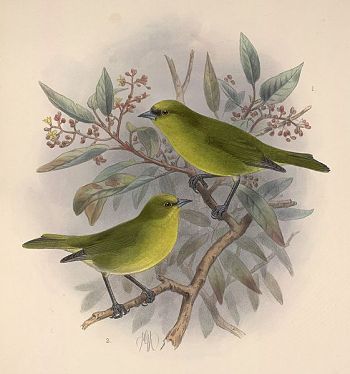 Akeke’e (Loxops caeruleirostris), by John Gerrard Keulemans. From: The Avifauna of Laysan and The Neighbouring Islands With a Complete History to Date of the Birds of the Hawaiian Possession, by Walter Rothschild (London: R.H. Porter, 1893-1900).

North American birders are largely ignorant of a disheartening extinction event faced by one of our nation’s 50 states. Hawaii has been called “the extinction capital of the world,” and the plunge by native island birds toward oblivion goes on unabated there today. For instance, ornithologists once identified 55 species of Hawaiian “honeycreepers;” now, only 17 species remain, 11 of them listed as endangered.

The American Birding Association’s June newsletter, Winging It, updated the current biological freefall on the island of Kaua’I in an article written by two local conservation activists, Oscar Johnson and Alex Wang. Formerly described as a lush paradise of native plants and animals, Kaua’I has become, according to the authors, “nothing short of an ecological disaster. There is hardly a single native plant or animal below 1,000 feet.”

The catalog of threats to native species is almost endless. Habitat destruction, of course, is ever-present in this “paradise,” as it is elsewhere; humans have leveled vast expanses of forests for agriculture and home building. At the same time, the prevalence of introduced plants and animals continues to overwhelm native populations. Devastating predators include feral cats, as well as introduced rats and mongooses-the latter brought to Hawaii to control the rats!

Especially insidious are mosquitoes, also imported to the islands by European seamen and settlers. These insects spread avian malaria and other diseases for which the native birds have not evolved a defense. “Species such as the ‘I’iwi have 90% mortality if bitten by a single infected mosquito,” write the authors. “That’s why almost all native passerines [songbirds] are restricted to high elevations, where it is too cold for mosquitoes to reproduce.”

They add that this manmade catastrophe proceeds in almost total silence outside Hawaii, and with little remedial action on the islands themselves. How many North American birders can even pronounce the names of endangered species such as the ‘Akohekohe or the Akeke’e?

“When you combine Hawaiian-language names with a complete lack of coverage [of the Hawaiian avifauna] in North American field guides, it’s no wonder that most birders from the U.S. and Canada have no idea even what a particular species looks like,” Johnson and Wang explain. “Something as simple as reintroducing these species to North American field guides (along with a pronunciation key) could do wonders for the public’s awareness of these species and, thus, their conservation.”