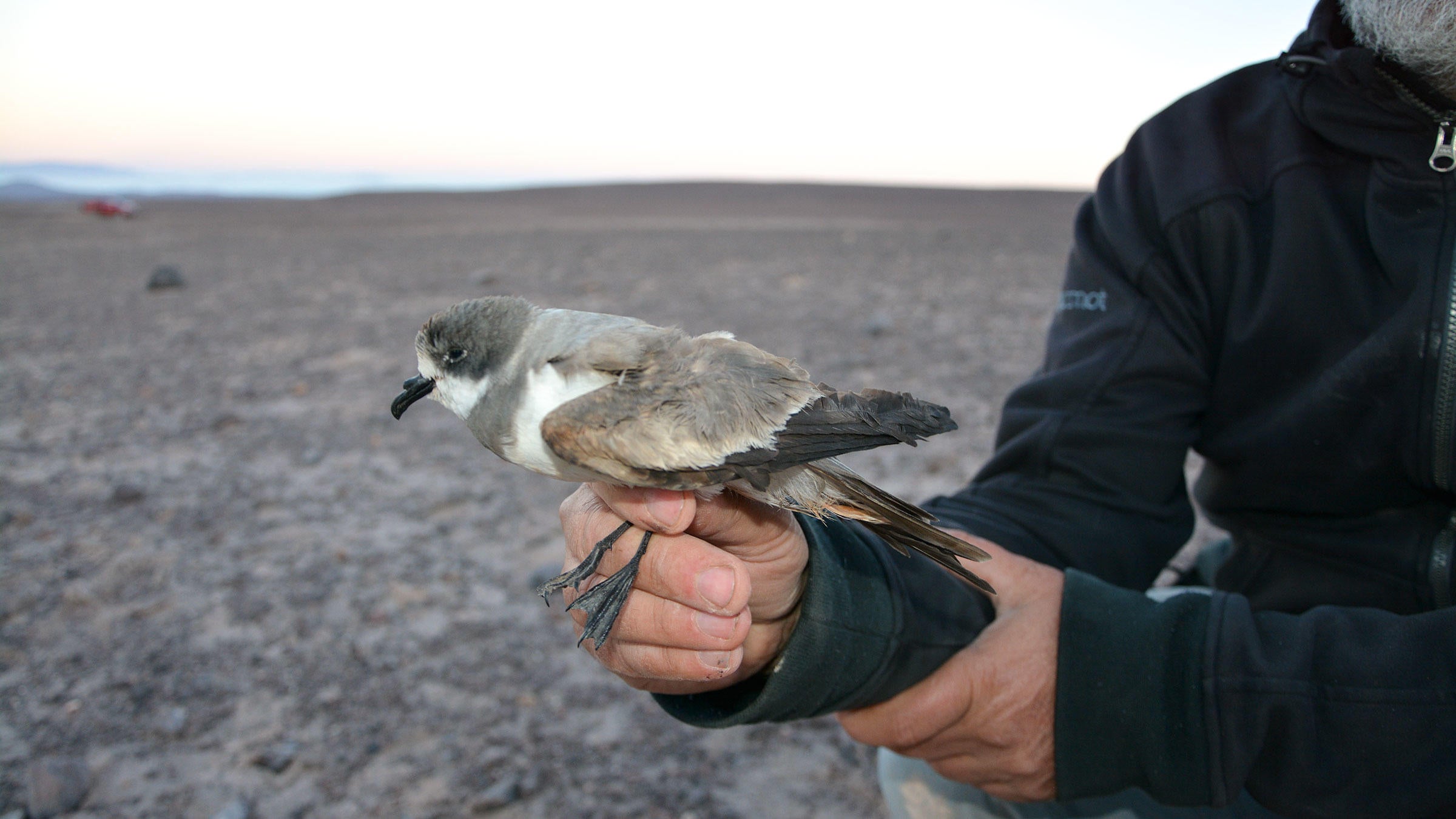 A Hornby's Storm-Petrel at the site where the colony was discovered in the Atacama Desert. Photo: Felipe de Groote

In Chile, a group of volunteer birders found the first-ever recorded nests of this mysterious bird 46 miles away from the coast in the Atacama Desert.

After four years of intense search, and guided by a strong fishy smell and some loose feathers, a group of volunteer birders has discovered the nesting place of the evasive Hornby’s Storm-Petrel in an unlikely setting: the Atacama Desert in South America. The team of researchers has gathered evidence of the birds’ nesting and reproductive habits 46 miles away from the Pacific Coast and more than 3,200 feet above sea level in an area currently considered the driest place on Earth.

Measuring between eight and nine inches and weighing only 1.7 ounces, the Hornby’s Storm-Petrel was first described in 1864 and has been observed year-round along the Pacific coastline of Chile, Peru, and Ecuador ever since. Its secretive habits—as well as those of the Markham’s Storm-Petrel and Elliot’s Storm-Petrel—have mystified scientists and ornithologists for decades. In fact, there’s so little known about the species that the IUCN Red List of Threatened Species classifies its endangerment status as “data deficient.” Even the total size of a Hornby’s Storm-Petrel colony is a mystery: estimates run anywhere from 1,000 to 90,000 individuals.

Still, it wasn’t until 2011, when the Chilean Network of Birds and Wildlife Observers (Red de Observadores de Aves y Vida Silvestre de Chile) started to work on the first Chilean Breeding Bird Atlas, that it became painfully obvious how little was known about these birds. In an attempt to find more information about them, a group of 10 volunteers—all members of the network—started the Swallows of the Desert Project (Proyecto Golondrinas del Desierto), so named because the storm-petrels look like swallows in flight. They suspected the birds might breed in the Atacama Desert because mummified remains had been found there previously.

The team’s efforts started yielding results in 2013, when they found the first colony of Markham’s Storm-Petrels, also in the Atacama Desert. Since then, the group has organized several research field trips every year, hoping to make other relevant discoveries. That’s how they found the Hornby’s nests. “We still don’t know anything about Elliot’s Storm-Petrels,” says Rodrigo Barros, the network’s president. Barros works a 9-to-5 job as an architect, but he dedicates every moment of his time off to studying the birds.

Following clues normally associated with birds, such as scraps of fish and feathers, the birders finally found 25 active Hornby’s nests hidden deep inside rocks. But the cavities, which the birds enter through openings only a few inches wide, seemed to be empty. The birders returned in April of this year to get the confirmation they were looking for: a Hornby’s Storm-Petrel coming out of one of the nests.

“The more we know, the more we can help in their conservation,” Barros says.

Conservation is certainly a concern in this region of the world. Unlike the Markham’s Storm-Petrel, which nests between 12 and 19 miles from the coastline, Hornby’s Storm-Petrels nest almost three-times farther away and in the middle of the desert, where other forms of life are not exactly abundant. Full of salt sources and with only one or two cloudy days a year, the area is currently attracting billions of dollars of investment for several solar energy developments.

“We know these birds’ habitat is very fragile to the activities of solar companies, but we also have other problems like mining,” Barros says. “Without this data, we can’t protect these birds at all. It’s a race for conservation and against time. It could be that the petrels have been severely affected by this activity for years now, and we just didn’t even know.”

But the birds are elusive, and to get to know them better, researchers have to play tricks on them. Since the entrances to their nests are so narrow, scientists don’t know how deep their burrows extend. To estimate this distance, they've projected recordings of petrel calls to lure the nesting birds into responding from the depths of their comfy homes. Barros and his team have heard answers from a considerable long distance—at least 15 feet—but they’ll need to do further research for a more accurate estimate. 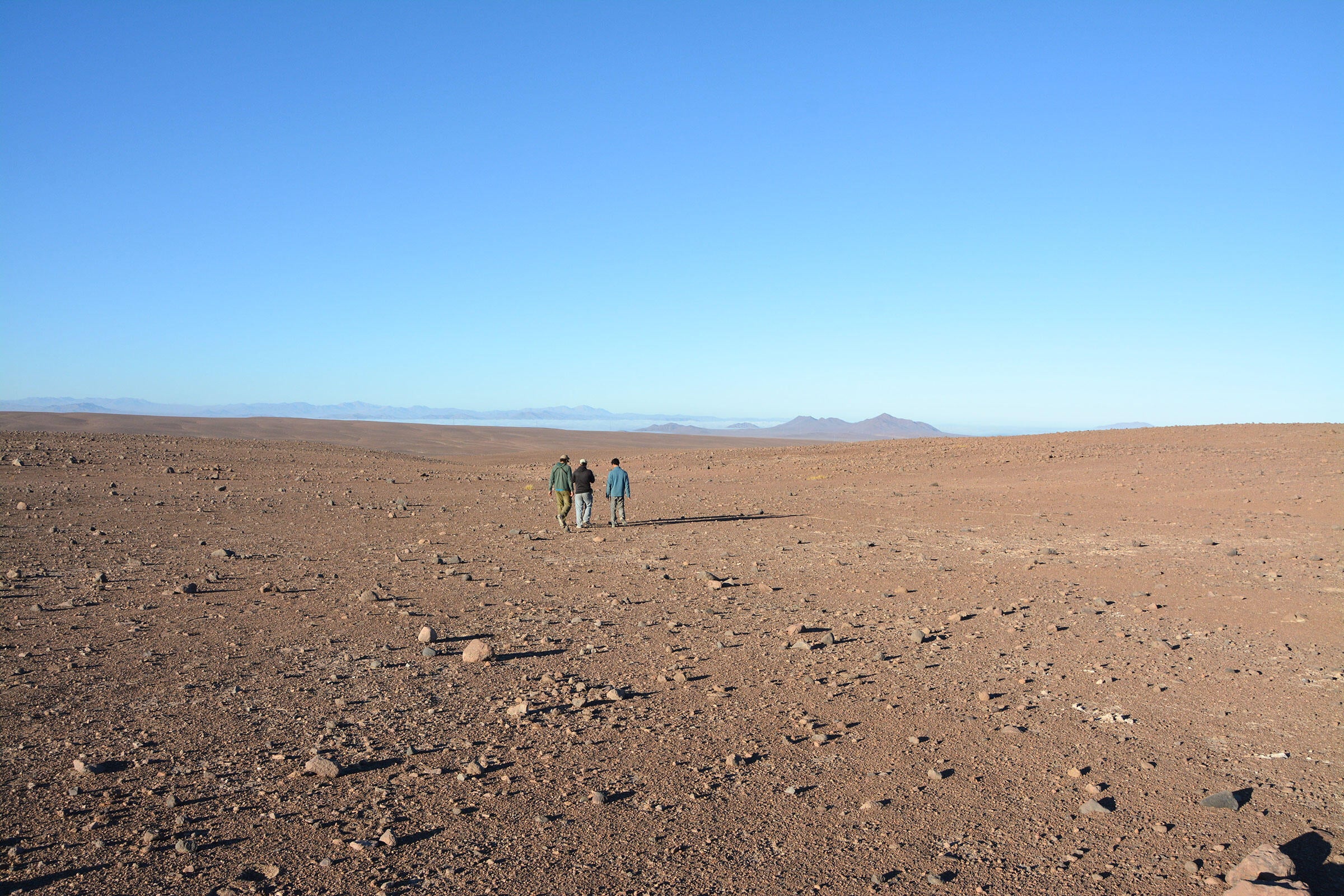 They might also be able to look to the past to better understand the species’ future. Steve Emslie, an avian paleoecologist at the University of North Carolina who didn’t participate in the new research, spent time researching fossil penguins in the Atacama Desert during the 1990s. He remembers being impressed by how well preserved everything was there, an advantage for studying climate history. By using radiocarbon dating on fossilized petrel remains, scientists might be able to recreate the past of these birds up to 45,000 years back, he says, something that could be useful to understand how they adapted to climatic change in the past. “The Atacama is a remarkable place and, like Antarctica, preserves a valuable long-term record that has not yet been studied in detail,” Emslie says.

Barros and his team of volunteers are currently working on a paper of their findings while they prepare for additional on-site visits. “Our other goal is to go back to the nesting area before the year ends, and we’re fundraising for it,” Barros says. “If we can document their reproduction habits, where they nest, and what threatens them, we can put try to put in place better policies to help increase their chances of survival in this ever-changing planet.”