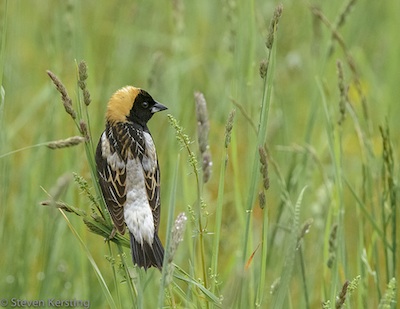 The bobolink is just one of many avian species that would benefit from conservation measures under the farm bill. Photo: Steven Kerstin/Flickr Creative Commons

In a surprising turn, the House failed to pass its version of the farm bill yesterday, with both Republicans and Democrats objecting to it in a resounding195-234 vote. The $939 billion legislation would fund programs ranging from farm subsidies and nutrition to conservation and rural energy over the next decade. The most contentious issue was steep cuts to the food stamp program.

Conservationists took a hit earlier in the day, when lawmakers withdrew a provision, the Thompson-Fortenberry amendment, which would require farmers growing crops on sensitive lands to put in place conservation measures in order to receive federally subsidized crop insurance. The move could protect a wide variety of birds that depend on grasslands and wetlands, including piping plovers, pintails, and bobolinks, a grassland dweller and the only American bird that's black underneath and white on the back.

The Senate passed its five-year, $955 billion version on June 10, and the House may yet try to revive the bill before the current version expires on September 30—though at this point it’s uncertain whether that will happen. So what happens if Congress doesn’t pass a farm bill?

In theory, the country would eventually revert to the agricultural rules written back in 1949, when the last permanent farm bill was enacted (subsequent bills have all been temporary). That 1949 act was crafted for a very different United States, with smaller crop production and higher consumer prices. So, for instance, dairy prices would skyrocket once outdated price supports came back into effect. Not everything would revert, though: Other programs, such as food stamps and crop insurance, would continue indefinitely without changes, since those are permanent programs.

Last year, Congress couldn’t agree on a new farm bill, and ended up settling on extending the 2008 bill through this September. Now, the House has a few options.

Agriculture Chairman Frank Lucas (R-Okla.) could remove some of the more contentious provisions and reintroduce the bill. Or the House could craft a short-term extension to take into conference and try to negotiate a compromise with the Senate-passed version, which contains far lower food stamps cuts.

For the love of cheese—and things far more serious—let’s hope we don’t revert to the antiquated system of 1949.