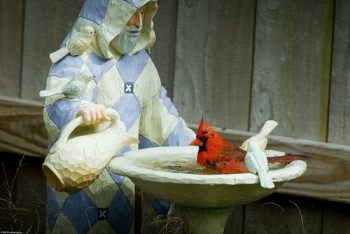 A cardinal cools off in a birdbath. Photo: Michael Glasgow / CC BY-ND

As temperatures bake much of the United States and the nationwide drought continues, crops wither and fish die. But they aren’t the only ones suffering from the blazing summer. Birds are also trying to keep their cool. But they don’t sweat like humans, or even pant like dogs; instead, they have a variety of unique adaptations to help beat the heat.

In a study conducted on marsh sparrows in 2011, scientists found that bill size correlates to outside temperatures. Marsh sparrows with larger bills live in warmer climates, for example. The study noted that the tropical toucan also possesses a large bill, and has the ability to increase or decrease blood flow to its beak to either promote or prevent heat loss.

Laura Erickson of the Cornell Lab of Ornithology, however, points out that the size of a bird’s bill isn’t the only factor that keeps it cool.

“In the case of the raven, the further north you go the bigger their bills are,” says Erickson. “But they need the bigger bill to chip into frozen carcasses in the winter.” Instead, some birds rely on a variety of behavioral adaptations in order to regulate their body temperatures.

Some birds, like the great blue herons that star on the Cornell Lab of Ornithology’s nest cam, will open up their wings on a hot day, allowing air to circulate across their bodies and sweep away the excess heat.

“We’ve watched the adults move their bodies to shade the chicks,” says Erickson. Great blue herons will also “droop” their wings in addition to opening them to protect their nestlings from the sun. But researchers can tell that the posture does more than just keep chicks cool, because the birds also do it when they're off the nest.

These are only a couple of behaviors that birds use. When it’s hot, some species will also resort to gular fluttering. The bird will open its mouth and “flutter” its neck muscles, promoting heat loss (think of it as the avian version of panting).

“If you think about a dog panting, their tongue isn’t only allowing evaporation, but is losing a lot of body fluid,” says Erickson. “Birds are much more efficient about water and water loss.”

Even so, birds still need to replenish fluids on a hot day. Installing a birdbath can provide feathered friends with a place to cool their heels in the summer, and get a drink. The water level shouldn’t be too high—only about an inch deep—and the bottom of the birdbath shouldn’t be too slippery. Replenish the water once every two or three days. Otherwise, the stagnant water can play host to algae and mosquito larvae, which can carry the West Nile virus as adults.

Almost as important as water is shade. Temperatures can be far cooler under trees or bushes, and birds often seek out these microclimates. Since a bird’s body temperature is much higher than that of humans—a golden crowned kinglet was once found to have a body temperature of 111 degrees Fahrenheit—it’s doubly important for them to cool off in a hurry. Proteins that shuttle vital information to a bird’s organs begin to break apart at temperatures that are only slightly higher.

Climate change is expected to make droughts more frequent and extreme temperatures more common. And some bird populations are already being affected by the consequences of global warming. A study published in the Proceedings of the National Academy of Sciences reported that tree swallows laid their eggs up to nine days earlier because of warmer temperatures in the spring. Several populations of birds, most notably warblers, have also shifted their home ranges northward, and migration patterns are changing to accommodate the change in climate.