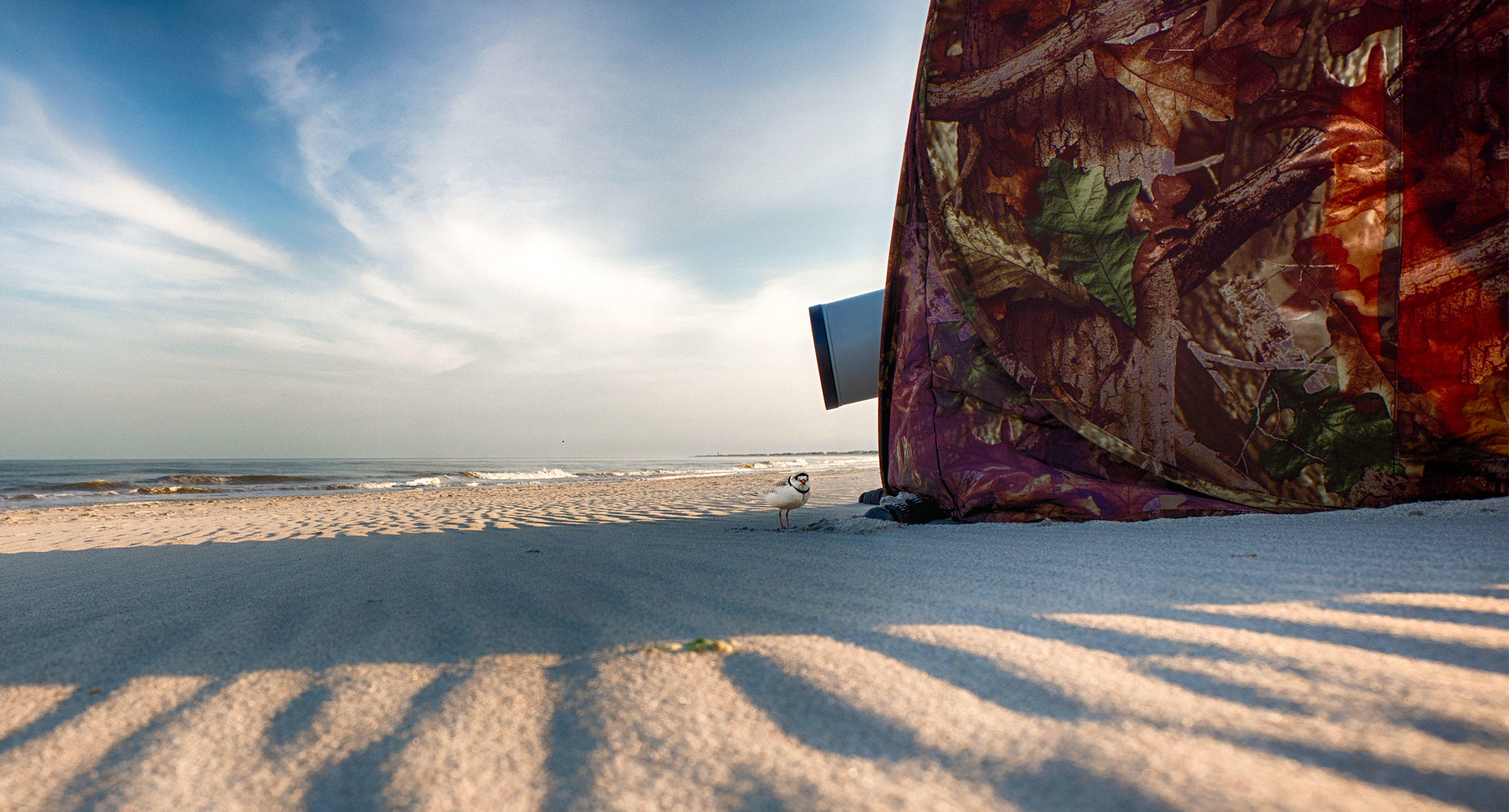 Shooting Piping Plovers and other beach-nesting species from a blind leads to better shots as well as less harm to birds skittish around humans. Photo: Jim Verhagen

It's one of the most unfortunate confluences in the natural world: beach-nesting bird season coincides with beach-going human season. Beach-nesting species, including the Piping Plover, American Oystercatcher, and Least Tern, prefer the same white sand beaches that people do, and for centuries they've evolved and adapted to survive there, mainly through camouflage. They don't bother with collecting sticks for nests, opting instead to lay eggs directly on the sand. And their eggs and chicks blend near-perfectly into the bleached terrain.

Now, however, these adaptations work against them as our joyful bare feet and all-terrain tires unknowingly squash eggs, chicks, and even adults out of existence each summer. It also doesn’t help that their required nesting habitat happens to be some of the most valuable real estate in some of the most populous regions in the world. Thankfully, scientists and naturalists recognized the rapid decline of many species, and protection and recovery plans were put in place: laws have been passed, beaches closed, fences erected, and studies done.

Despite these measures, the beach-going public has yet to embrace, or even really to notice, these marvelous creatures. But one community discovered their magic long ago: bird photographers. Turning their massive lenses on these tiny animals, photographers help to magnify and raise awareness of beach-nesting birds and their daily effort to survive.

But even we can harm these delicate creatures if we are not extremely careful. Most photographers know the basics: Be careful not to step on chicks, don’t separate chicks from their parents, and use great caution around incubating birds as they are prone to abandoning nests when disturbed. That’s a great start. But the truth is, the guidance you find on interpretive signage barely scratches the surface. If beach-nesting birds are to have any real future, we must learn how to truly share their habitat.

Each season is an opportunity to understand more about the needs and struggles of beach-nesting birds—and to improve your photography in the process. Here are a few of the more-subtle lessons I’ve learned over the years.

Photographing beach-nesting birds that nest in colonies, such as terns and skimmers, is always a thrilling, chaotic, and messy experience. Time your visit right and you might find thousands of birds of various ages, genders, and species crowded together on a tiny beach. Thanks to the good people who devote their time to protecting these endangered species and habitats, interpretive signage and symbolic fencing are often in place to help us keep a safe distance and minimize our impact and disturbance.

Yet fences are just estimates of a nesting colony's borders. It's tempting to set up equipment right along the fence line to get close to our subjects, but that makes the false assumption that the birds also respect the fencing and so will be perfectly safe as long as we don’t cross the line.

I learned just how untrue that is the first time I used a blind. I use blinds frequently, but had never thought to use one for beach-nesting birds. I was immediately struck by how peaceful it was in the cool shade, with my gear spread safely around me. But most surprising was how quickly the birds settled down, and the amazing things I would see soon after: Chicks running to the water just inches away; adults moving their broods back and forth right in front of me; courtships and copulations so close I had to turn my head in modesty. The behavior of the colony is drastically different when they believe that we have vanished. It was hard to fathom just how much I had been missing during all of those other visits, when I had been calmly, quietly, and legally sitting along the fence photographing the chaos.

But I soon discovered the most important thing I had been missing: camouflaged nests laid far too close to the symbolic fence. While I was tucked away discreetly in the blind, the birds showed me all of the nests they would not have returned to if they saw me sitting along the fence. I still shudder to think how many eggs were cooked in the sun in a nest I never saw because I was sitting too close, even though I was on my best behavior.

I had been photographing Piping Plovers for years when I got the opportunity to observe a study, for which my local plover chicks were trapped, weighed, and measured by scientists each week. The study isn't finished yet, but the initial data indicate that some broods on my beach, and on high-traffic beaches like it, are extremely malnourished. Chicks reared in areas closed off to people and dogs, on the other hand, tend to gain weight much more successfully.

The implications were disheartening: Even though I couldn’t see it, my precious birds were going hungry, and it might be my fault. My guilt led me to stop bringing my camera altogether. Instead, I watched the brood from a distance and tried to understand how a human presence prevents them from getting their fill.

I soon noticed that Piping Plover chicks eat all the time, even when we are chasing them with cameras, and it turns out that those calories come from very specific places at very specific times. Once you understand the distinct habitats of a particular brood, you start to notice just how often photographers unknowingly position themselves on the ground with their skimmer pods directly in the birds' foraging paths. The plovers usually respond by retreating to less desirable, less nutritious habitats. Those lost opportunities, and lost calories, are not recoverable; it's easy to underestimate just how difficult it is for a brood to get the calories they need. Failure to reach ideal weight during the short season can drastically undermine their chance for survival as adults.

Fortunately, what is good for the birds is also good for our photography. Always take the time to watch your broods from a safe distance for a few sessions before photographing them. Understand where they go and how they get there when no one is around. Learn how they react under various forms of disturbance. Armed with that knowledge, you can position yourself appropriately for that brood and get some amazing photos of healthy animals living natural lives.

Jim Verhagen is a self-described beach bum with a camera from Long Beach Island, New Jersey. He strongly believes that coastal wildlife is the undervalued crown jewel of the Jersey Shore and works tirelessly to get more people to agree with him.