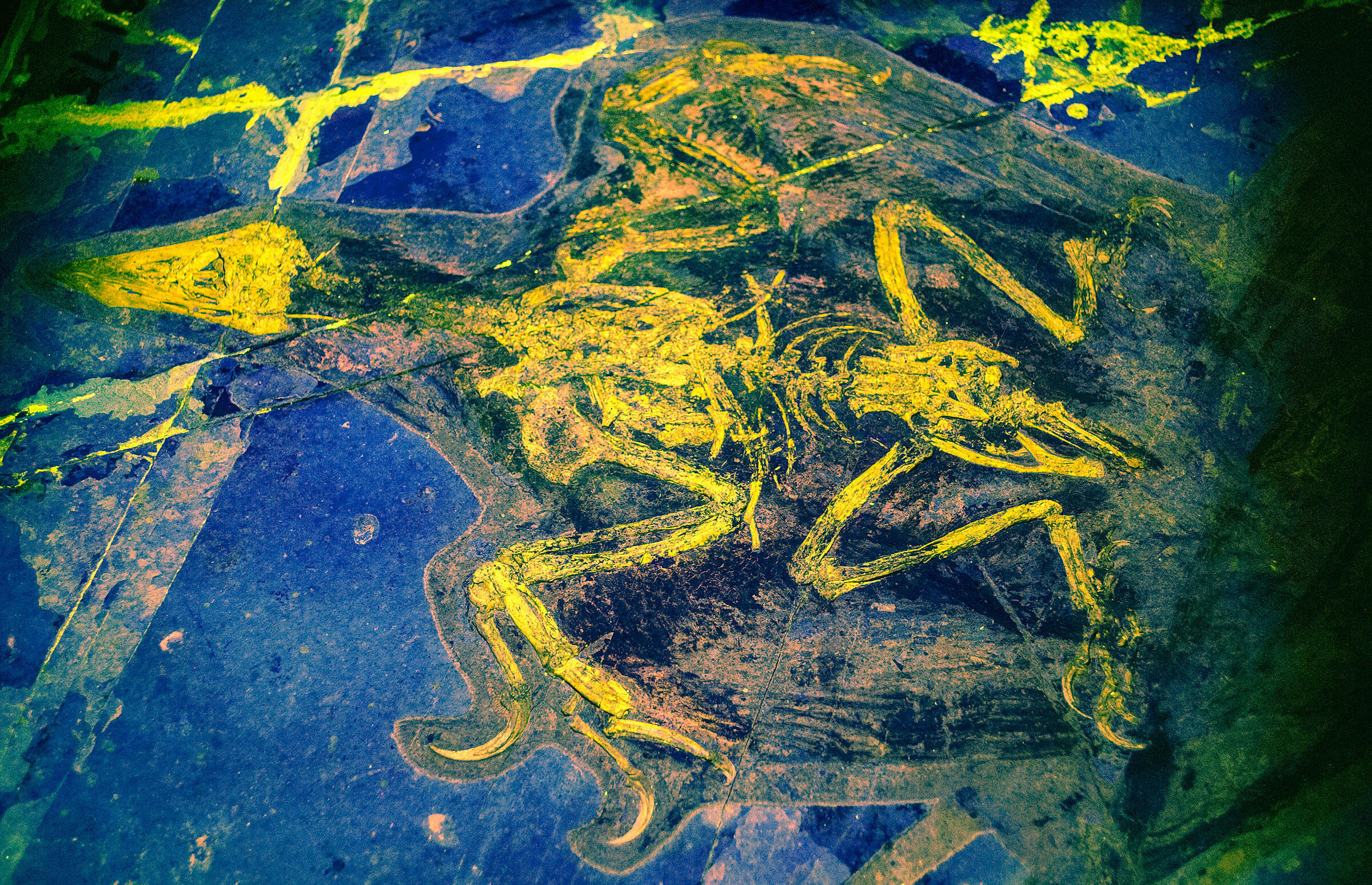 In this photo of a Confuciusornis specimen lit by laser-stimulated fluorescence, the different colors represent varying geochemical signatures in the minerals. This can help scientists identify previously invisible organic materials. Photo: Tom Kaye

Using a special lighting technique, researchers have already made several surprising discoveries about one early species of feathered dinosaur.

Four years ago, paleontologist Amanda Falk was sitting in a grad student’s office in Beijing when she saw something extraordinary. She’d been using a combination of fluorescent lasers, blocking filters, and a camera to photograph a sedimentary slab containing a fossilized Confuciusornis, a crow-size bird from the Early Cretaceous in Northeastern China. The region is famous for preserving traces of soft tissue from birds and dinosaurs, and the flattened skeleton showed vague, dark patches around the bones: the remains of feathers and the faint impressions of wings. Falk and her colleagues suspected the fossil might be hiding other secrets—perhaps even organic residue invisible to the naked eye. But taking photos with lasers is a delicate process, so Falk couldn't see the results until she sat down to go through them digitally.

“I got so excited I actually started dancing around this poor guy's office,” Falk says. She’d been expecting to see a faint haze around the bones of the foot. Instead she saw scales, glowing clear and sharp, similar to those on the feet of modern parrots and other arboreal birds. "I didn't expect it to be that perfectly clear and preserved.”

While much of paleontology is still conducted by studying fossilized skeletons, soft tissue remains are invaluable to understanding the life histories of ancient animals. But they are rare, and often nebulous in appearance. Confuciusornis is a case in point. Hundreds of complete skeletons have been found in Liaoning Province. Several—perhaps males—have paired ornamental tail feathers longer than the entire rest of their bodies. All of the specimens have hands and feet tipped with big, curving claws. But the traces of wing feathers also present have been inconclusive as to whether or not Confuciusornis could fly, and researchers have disagreed about whether the bird spent most of its time in trees or on the ground. 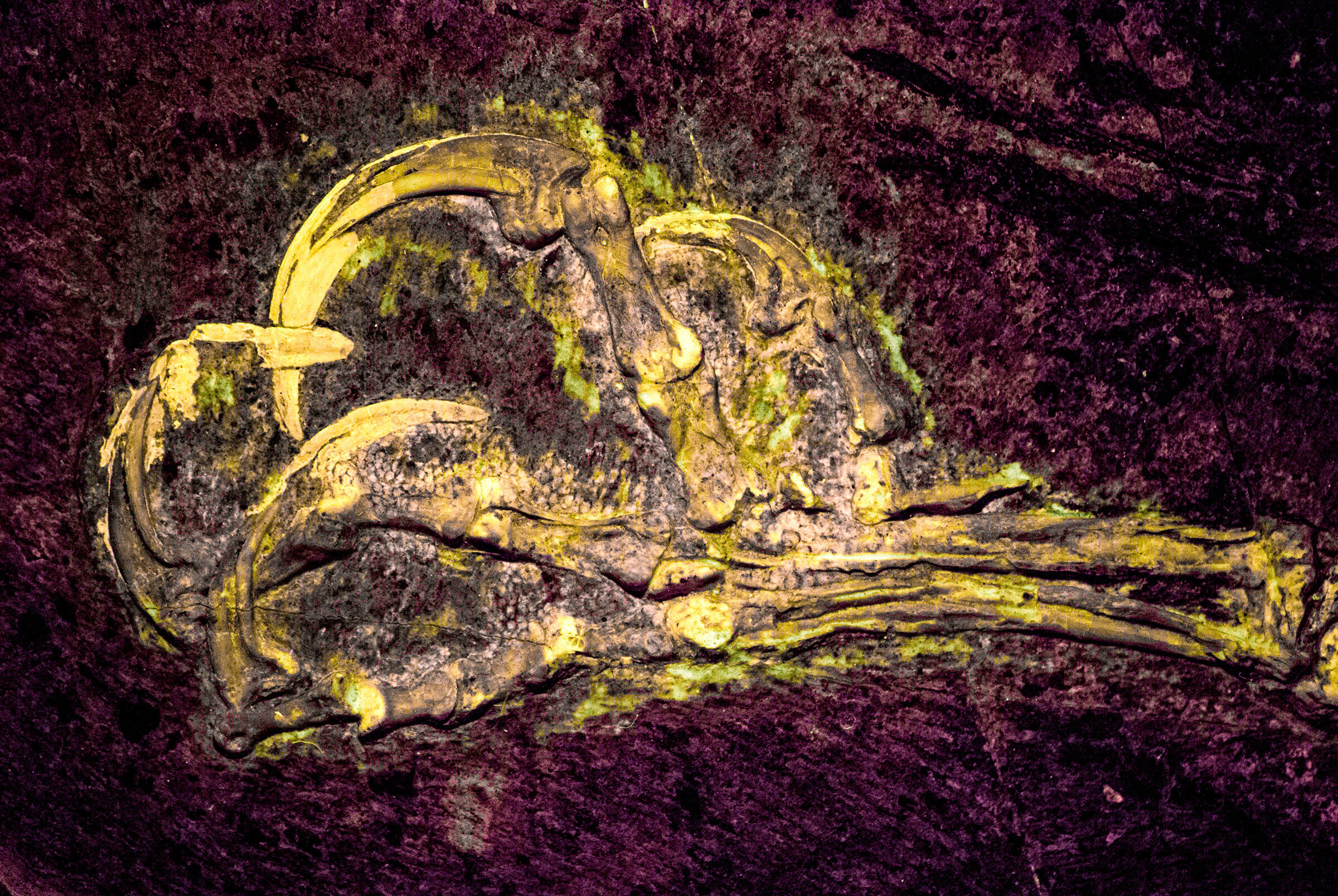 Revealed by laser fluorescence, rounded reticulate scales on the foot of this Confuciusornis specimen suggest flexibility that is important for clinging to branches. Photo: Tom Kaye

That was where Falk came in. An assistant professor of biology at Centre College, Kentucky, Falk specializes in teasing out the relationships between anatomy and behavior in ancient and modern birds. Her primary focus has been looking at bird feet and the way they contribute to an animal’s habits, which is how she came to focus on Confuciusornis, she says. But it wasn’t until she was introduced to Thomas Kaye that the study came together.

A scientist with Seattle’s Burke Museum of History and Culture, Kaye had long been interested in laser-stimulated fluorescence, a principle widely used in biology and micropaleontology to pick out structures hidden to the naked eye. The process works on the principle that certain compounds glow under different wavelengths of light. (Imagine running a UV bulb over a trippy blacklight poster.) Since the chemical and mineral makeup of fossilized bone is different from the surrounding stone, the process can also work on fossils, revealing faint bones or evidence of tampering. If the preservation is good enough, organic residues can be seen as well. Falk suggested using the technique on Confuciusornis. 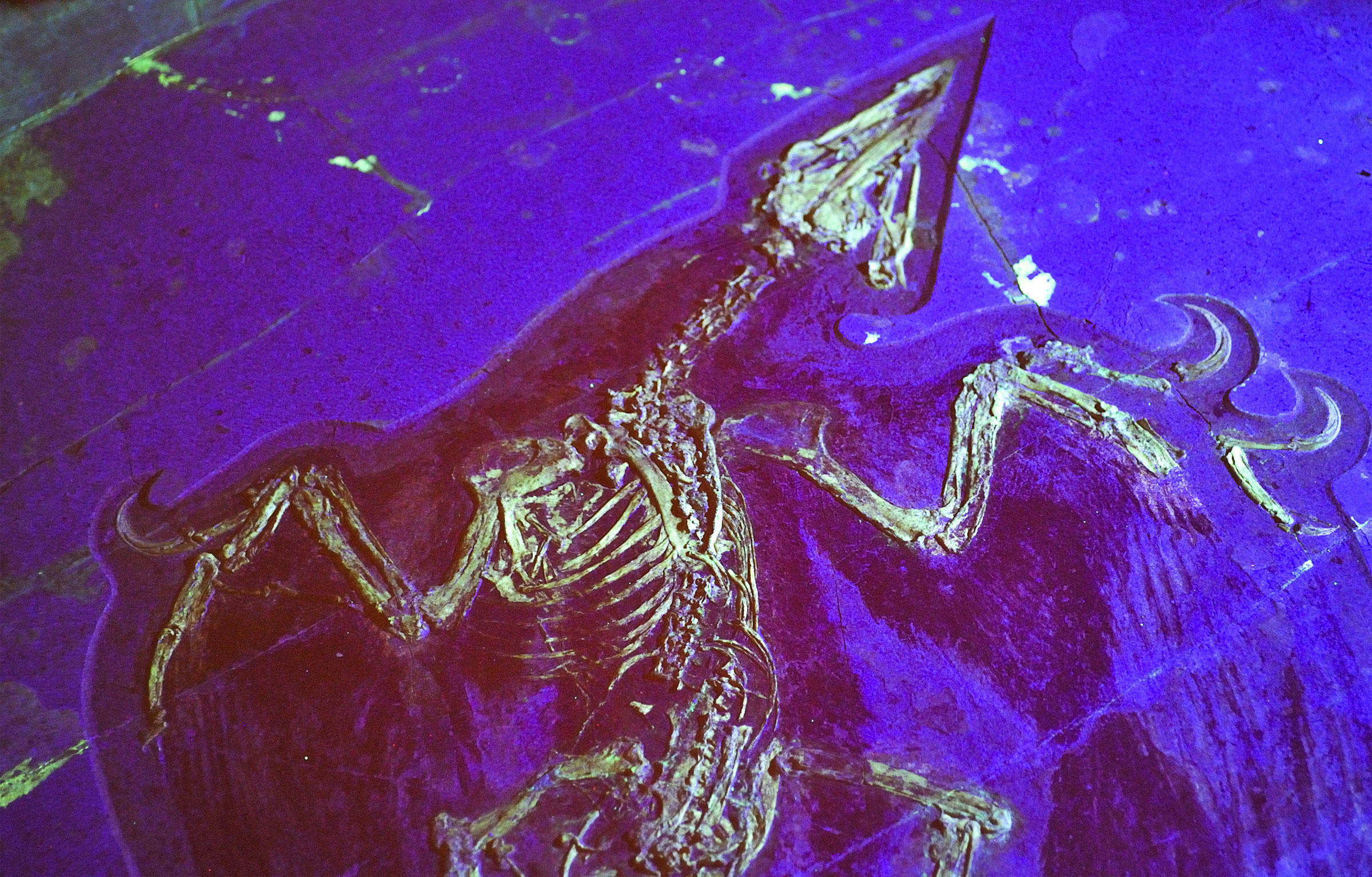 Using laser fluorescence, researchers were able to discover that Confuciusornis had a patagium, the web of skin connecting its hands to its shoulders, which is indicative of the ability to fly. Photo: Amanda Falk

In 2013, the team traveled to China to study Confuciusornis specimens from the Institute of Vertebrate Paleontology and Paleoanthropology in Beijing. Using a process Kaye had developed, they placed the fossils in a dark room—the grad student’s office—and scanned them with an intense blue laser, remotely filming a time exposure through a laser-blocking filter. The filter isolated the wavelengths coming off the specimens, revealing features invisible under normal light. The anatomy they uncovered, published in open-access journal PLOS One, gave a surprisingly clear picture of how this ancient bird lived.

Take the feet that so fascinated Falk. They have fleshy toe pads, and the skin on the underside is covered in small, rounded, non-overlapping scales, which give the toes more flexibility. Modern birds with similar feet tend to spend a lot of time clambering around branches. Then there’s the wing: Confuciusornis had a wing shape completely unlike any bird alive today, with long primary feathers and a broad, rounded outline. The discovery of a patagium—the flap of skin connecting a bird’s wrist to its shoulder—means that, contrary to previous thinking, Confuciusornis could probably fly under its own power. Its hands were unlike modern birds, too: The preserved tissue shows that the thumb was mobile independent of the fingers, the better to grip with its long, hooked claws. Taken together, Falk says, the evidence paints the picture of a bird that spent most of its time moving along branches and trunks, able to flit from one tree to another and keep out of the way of the predators on the forest floor. “Almost like a woodpecker, but with different life habits,” she says. 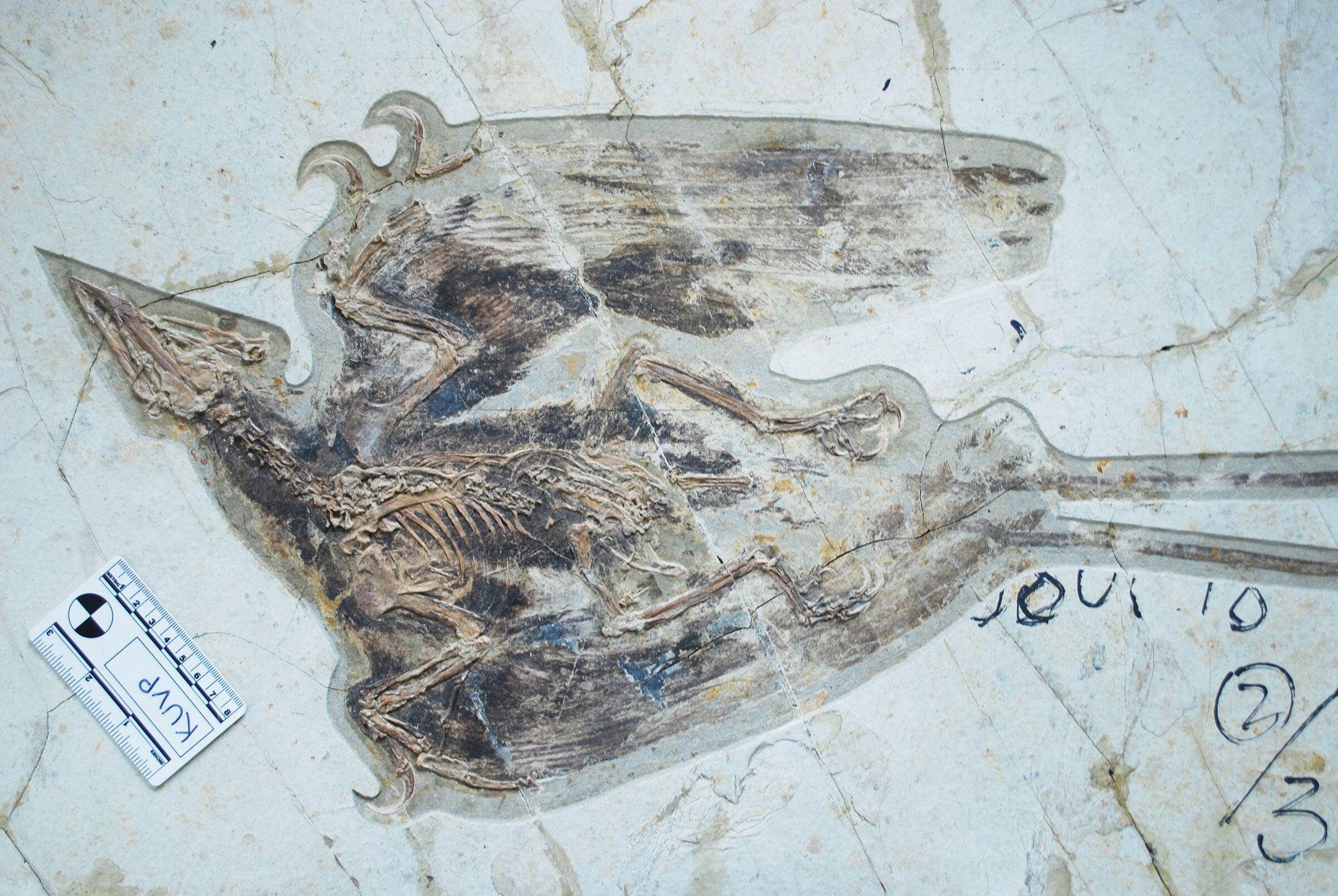 A Confuciusornis specimen, about the size of a crow, under normal white light. Photo: Amanda Falk

The patagium and overall wing anatomy are a particularly interesting finds because Confuciusornis belongs to a low branch on the avian family tree. If it had such advanced traits, this suggests two things: that features like the patagium arose earlier than paleontologists had thought, and that answers to longstanding questions about bird evolution might be found in earlier rocks. The trick is finding them. But through the use of lasers, Falk and Kaye think there are all kinds of new discoveries to be made, even in fossils previously studied. The process works best on finely preserved fossils like those from Liaoning, Falk says, but it should be able to work on other sediments, too: There could be all sorts of soft tissues locked in the stone, faint and unseen. It’s hard to know what’s out there, hiding in the light.