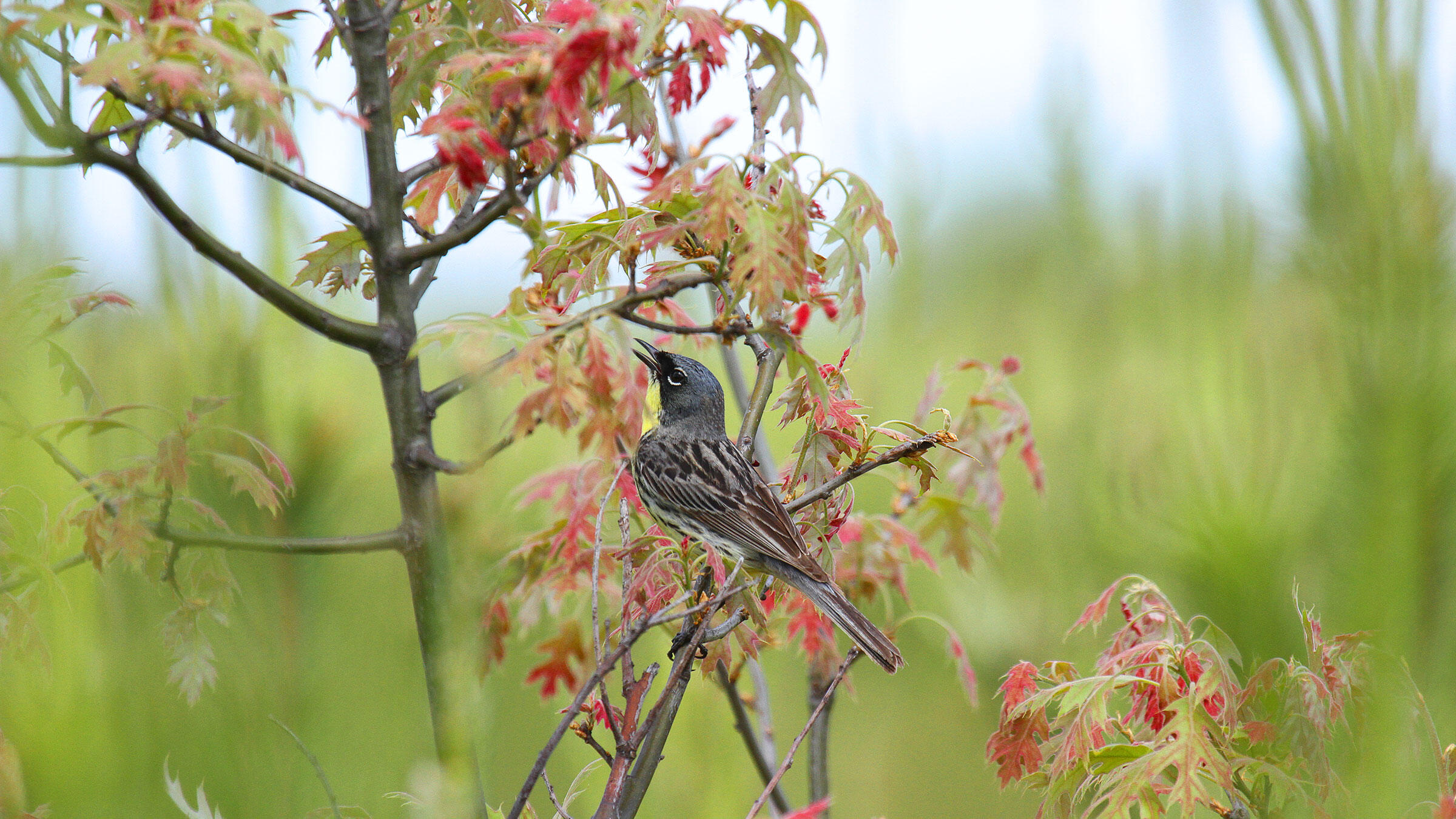 Somewhere in a thawing field in far northern Wisconsin, the song of a Kirtland’s Warbler bursts from a clump of young pine trees and echoes through the crisp spring sky. If luck prevails and the winds are favorable, there’s a chance another rare bird passing through might hear the chippy aria and decide to stay for a while.

But back in the stand of trees, nary a warbler can be found. Instead, there’s an MP3 player hooked up to a plastic Rubbermaid bin, holding a hefty battery. This setup is the handiwork of researchers trying to get the Kirtland’s Warbler to expand its territory in Wisconsin.

Since 2014, Nick Anich, a biologist from the Wisconsin Department of Natural Resources, has been embedding these makeshift stereos in terrain suited to the warbler’s finicky tastes. The half-ounce songbird nests almost exclusively in the scrubby jack pine stands found in northern Michigan, a landscape that declined sharply in the 20th century from human disturbances and drastically reduced the bird’s population. Similar habitat exists in Wisconsin, but the birds have to find it first. That’s where the artificial acoustics come in.

The boxes blast a recording of the Kirtland’s voice, mostly the stuttering song of an aggressive male. The idea is to use these playbacks to provide social cues to warblers as they fly through, suggesting that there are other birds of their kind nearby. That in turn tells them there’s suitable nesting habitat. “This just anchors them and says: ‘Hey, everybody, this is the party,’ ” Anich explains.

Kirtland’s Warblers have a small established territory in Adams County in southern Wisconsin, but they periodically surface elsewhere in the state—sometimes as much as 200 miles away. Biologists say they might overshoot their usual nesting sites as they migrate north from their wintering grounds in the Bahamas. Or it may be that the birds roam intentionally to seek out pine patches that spring from the ashes of forest fires.

Regardless of the circumstances, getting more birds to nest in Wisconsin would back up the broader Kirtland’s recovery efforts. The species was reduced to as few as 167 breeding pairs by the early 1970s, largely due to fire suppression and nest parasitism from Brown-headed Cowbirds. But decades of conservation measures have reversed the trend in Michigan, where wildlife managers have been working to create new habitat and trap cowbirds. With the population now estimated at more than 4,000 individuals, the U.S. Fish and Wildlife Service has proposed removing the species’ endangered status—and the protections that go with it.

The final decision is expected within a year, but even if the bird’s status is downgraded, the work by conservationists is far from over. Nonprofits and government agencies will need to continue burning or harvesting old forests to make way for young jack pines. “It’s not something that’s going to be maintained without a lot of effort or a lot of people on the ground,” says Stephanie Beilke, the conservation science associate at Audubon Great Lakes.

Even with intensive management, however, the bird’s range will be limited, and that carries its own risks. “If a large fire or insect outbreak tore through the handful of Michigan counties that have 95 percent of the population, we could be in big trouble," Anich says, "unless we had other sites where the species is breeding."

Which is why it’s important to establish an alternate hideout. So far, biologists in Wisconsin have been encouraged by the preliminary success of the playbacks. When they started the project in 2014, they found a single male Kirtland’s in the two counties they’d scoped out for habitat. By 2016, the count was up to seven adults and 10 fledged young.

Map of Kirtland's Warbler breeding locations. The diamond marks the main population; circles mark small subpopulations; and pins mark the two prospective populations that are being established through playbacks.

The results, while limited, have been somewhat astonishing. Given that male Kirtland’s are territorial, their songs can be taken as threats, not lures. But Anich and his peers decided to forge on with the playbacks after seeing their effect on another endangered songbird. In 2001, University of Illinois ornithologist Mike Ward, who’s partnering with Anich as well, adopted the same methods to draw Black-capped Vireos to conserved habitat outside of Fort Hood in Texas. In Ward’s case, though, he needed to coax the birds over a relatively small range—30 miles or fewer. For the Kirtland’s Warblers, the playback ploy is pushed to its limits; the Wisconsin sites are 340 miles from the bird’s core range in Michigan.

And yet the project is showing potential. Anich estimates there’s enough suitable habitat in the state to support another 250 breeding pairs, or 10 percent of the global Kirtland’s population. What’s more, the land where Anich’s work is taking place is public, which makes it easier to maintain for wildlife purposes.

Bayfield County, along the far northern border of Wisconsin, is one of the sites that’s shown the most promise. The reason is two-fold: It doesn’t have an abundance of Brown-headed Cowbirds, and forestry officials have already begun a 48-year rotational cycle of harvesting timber stands for Kirtland’s Warblers and other birds like Sharp-tailed Grouse.

“It’s going to take quite a few years to get this all in place, to get it to rotate like we want it to,” says Andrew O'Krueg, a forester at the Bayfield County Forestry and Parks Department. “But we’re planning to do this for forever.” That shouldn’t be the case with Anich’s project. At another site in Marinette County, he’s already removed the playback boxes because enough warblers have settled in to sustain a local population. All that’s left to do now, Anich says, is grow the pines until it’s time to burn it all down to the ground.