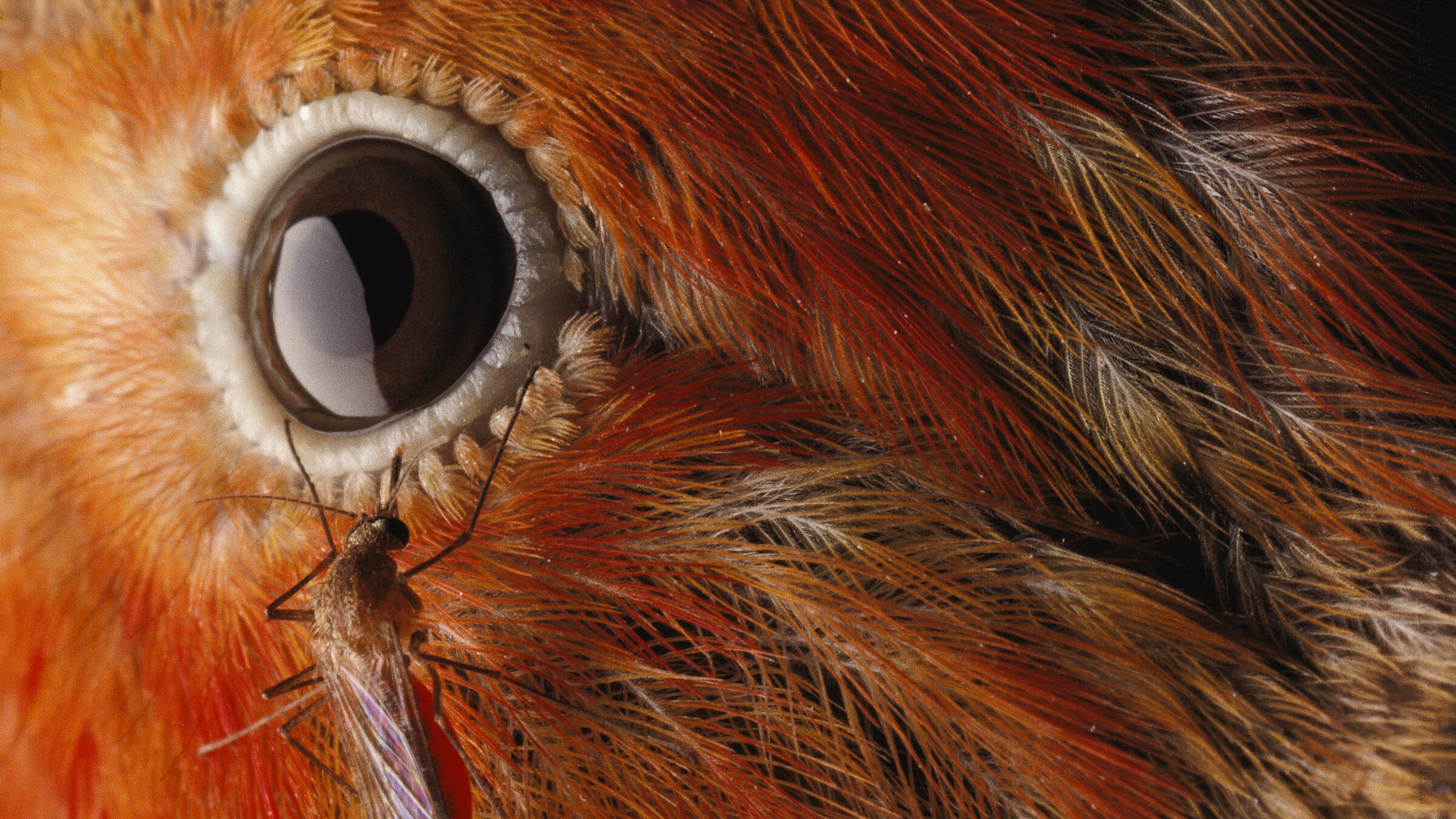 A Culex mosquito lands near the eye of an `I`iwi bird in Hawaii. Photo: Chris Johns/National Geographic Creative

Birds have their own strain of the disease—and it could be hurting them in ways we’re just beginning to understand.

In the world’s humid and swampy regions, spring and summer mean buggy, itchy weather. For people, insect season is always annoying and sometimes dangerous. Birds get bug bites, too, and, as in humans, these can cause diseases, including malaria. New research finds that although birds often survive these infections, they’re hardly left unscathed.

A study recently published in Science found that while the majority of bird species don’t die from avian malaria, it can produce chronic side effects. And these side effects can mean shorter life spans for infected birds.

Dennis Hasselquist, a biologist at Lund University in Sweden and an author of the study, indicated that while the study focused on only one species—the Great Reed Warbler—there are far-reaching implications for many others.

Here’s a guide to what we know about avian malaria.

How do birds get malaria?

Mosquitoes. These bugs are the carriers of some of the nastiest human diseases, including malaria, dengue fever, yellow fever, and West Nile virus. But they also carry avian malaria. The infection is caused by a parasite, a microscopic protozoan called Plasmodium relictum, which only certain species of mosquitoes carry around with them.

Can people get avian malaria?

Avian malaria is not often deadly, but it leads to an infection that can be mild to severe. Most bird species that live where the offending mosquitoes are present have developed some degree of immunity to the disease, which helps them survive it.

But bird species in some regions, such as Hawaii, which were only recently exposed to avian malaria via globalization, are experiencing higher mortality rates. In fact, when Hawaii’s birds were first exposed to avian malaria, 10 native species went extinct because of the disease. And it continues to be a threat to other Hawaiian species.

So how does malaria hurt birds?

Even when avian malaria isn’t fatal, the recent Science paper shows, it can have a lasting impact by shortening the length of the birds’ telomeres. Telomeres are the ends of chromosomes that protect DNA from damage, and their length is an indicator of lifespan; longer telomeres mean longer life. More worrisome, the researchers realized, the shortened telomeres don’t affect just the bird that got malaria. Although female birds infected with malaria can still produce healthy chicks, they can pass down to their offspring a genetic predisposition for shortened telomeres, basically creating new generations of birds with shorter life spans.

“It confirms what a lot of people have thought,” says Carter Atkinson, research microbiologist at the United States Geological Survey’s Pacific Island Ecosystems Research Center. “There is a physiological cost [to avian malaria].”

What can be done to prevent the disease?

Not much. It’s often hard to track how the disease is progressing because wild birds do not always show symptoms. The most effective way to limit the spread is to reduce the number of mosquitoes, as is done to prevent other diseases, such as West Nile Virus. But that requires a lot of insecticide, which creates other problems.

It’s easier to prevent avian malaria in domestic populations, which can be protected from mosquitos with netting, says Sharon Okanga, a biologist at the University of Illinois in Urbana-Champaign.

Thanks to warmer temperatures, the range of avian malaria-carrying mosquitos is constantly expanding. A 2012 PLOS One study found that they had made it all the way to Alaska, where the disease previously didn’t exist. Species there, which haven’t developed any immunity, are more vulnerable. If this trend continues, it could have a dramatic effect on bird populations.

It’s important to remember that malaria isn’t the only disease transmitted by mosquitoes. “There is a whole suite of parasitic organisms,” Atkinson says, “and we don’t have a good grasp on how they interact with each other.” Just another reason to try to minimize the effects of climate change.