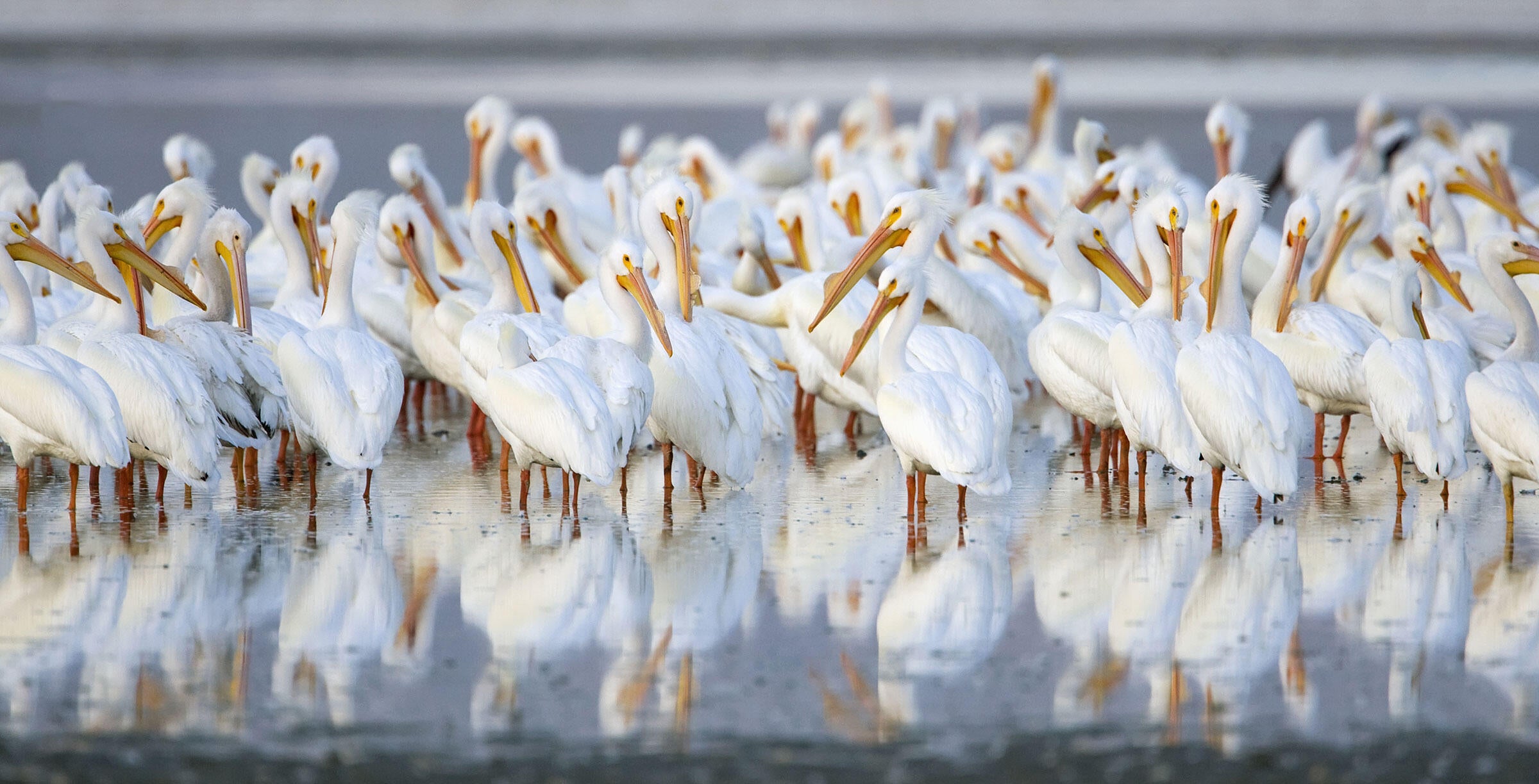 A decade ago, millions of Eared Grebes feasted on invertebrates like pile worms at the Salton Sea, a globally important bird area in California that is fed by agricultural runoff diverted from the Colorado River. But last year, Audubon California counted only hundreds. “Something is happening to the Sea,” says Andrea Jones, director of bird conservation for Audubon California.

Ongoing rain shortages combined with reductions in the human-made water diversions have disrupted the ecosystem that sprung up in the Salton Sea over decades. Brown and American White Pelicans and Double-crested Cormorants are also disappearing as the lake becomes saltier and their main source of food, non-native tilapia, have stopped reproducing.

“The birds are clearly telling us that the Salton Sea is changing—and we need to pay attention before it’s too late,” Jones says.

As temperatures rise and drought conditions continue, it’s clear that hoping for more water can’t be a real solution. But how much water is enough to save the Sea for birds and alleviate the growing public health issue caused by toxic dust streaming off the drying lakebed and into people's lungs?

Supervising a team of scientists, Jones has created a series of calculations—what Jones calls a Water Calculator—to determine exactly how much water birds in the Salton Sea need to survive. And although Jones declined to quote an exact number, she says it’s less than anyone expected.

To create the water calculator and make it broadly useful across the entire Salton Sea, Jones chose 15 bird species that represent a range of habitats and looked at all of the variables—water depths, salinity, food, habitat conditions, places to roost—that impact whether the birds thrive. A scientist could, for example, plug in the American Avocet, one of the 15 chosen species, and the calculator would determine how much water the avocet—or any other bird species that relies on similar wetlands—needs and at what time of the year.

Now that water and land managers know how much water the area needs, they can proceed with habitat restoration projects.

By looking at all 15 bird species, Jones was able to determine an aggregate amount of water that the Salton Sea requires each year to maintain habitats for all of birds that use the sea, a kind of North Star to aim for that will keep the sea healthy for everyone. And because the data can be updated with local conditions like rainfall and weather, the water calculator could be used for other inland salt lakes beyond the Salton Sea. It can also predict different water needs based on climate change scenarios. Now that water and land managers know how much water the area needs, they can proceed with habitat restoration projects; one of the biggest hurdles to getting started at the Salton Sea was how far away and difficult the goals felt.

“This water calculator is exciting, forward-looking science—now we know for sure that habitat restoration is a goal we can reach,” says Karyn Stockdale, senior director for Audubon’s Western Water Initiative. “The State of California has the funding, a list of shovel-ready projects, and now we know how much water we need. The ingredients are all here.”

One thing the water calculator cannot tabulate is the level of motivation by California state agencies to act. Although there is a long history of inaction by the state, Audubon remains hopeful that Governor Newsom and his new administration will give the Salton Sea the attention it needs. Last spring then-Lieutenant Governor and gubernatorial candidate Newsom stopped at the Sea and pledged to make it a priority in Sacramento.

Although the scenario at the Sea seems bleak right now, Jones wants people to know that this isn’t the end days for this critical habitat. Audubon California recently shared a map, in English and Spanish, of birding spots where you can go to experience this lake and its birds and wildlife firsthand. “I don’t want people to think you can’t go birding here anymore,” she says. “I don’t want people to think the Sea is dead—it’s not. But it’s up to us to solve a problem humans created.”

Audubon is a nonprofit dedicated to saving birds and the places they need. You can support our conservation work by donating today.

How Do We Save the Salton Sea?

For decades California's largest lake has teetered on the edge of ecological disaster. But a new deal and action plan may finally be gaining momentum.

Like people, birds depend on water, relying on it during migration, breeding, and nesting. But increasing pressures on already scarce Western waters have put birds and other wildlife in a perilous situation.