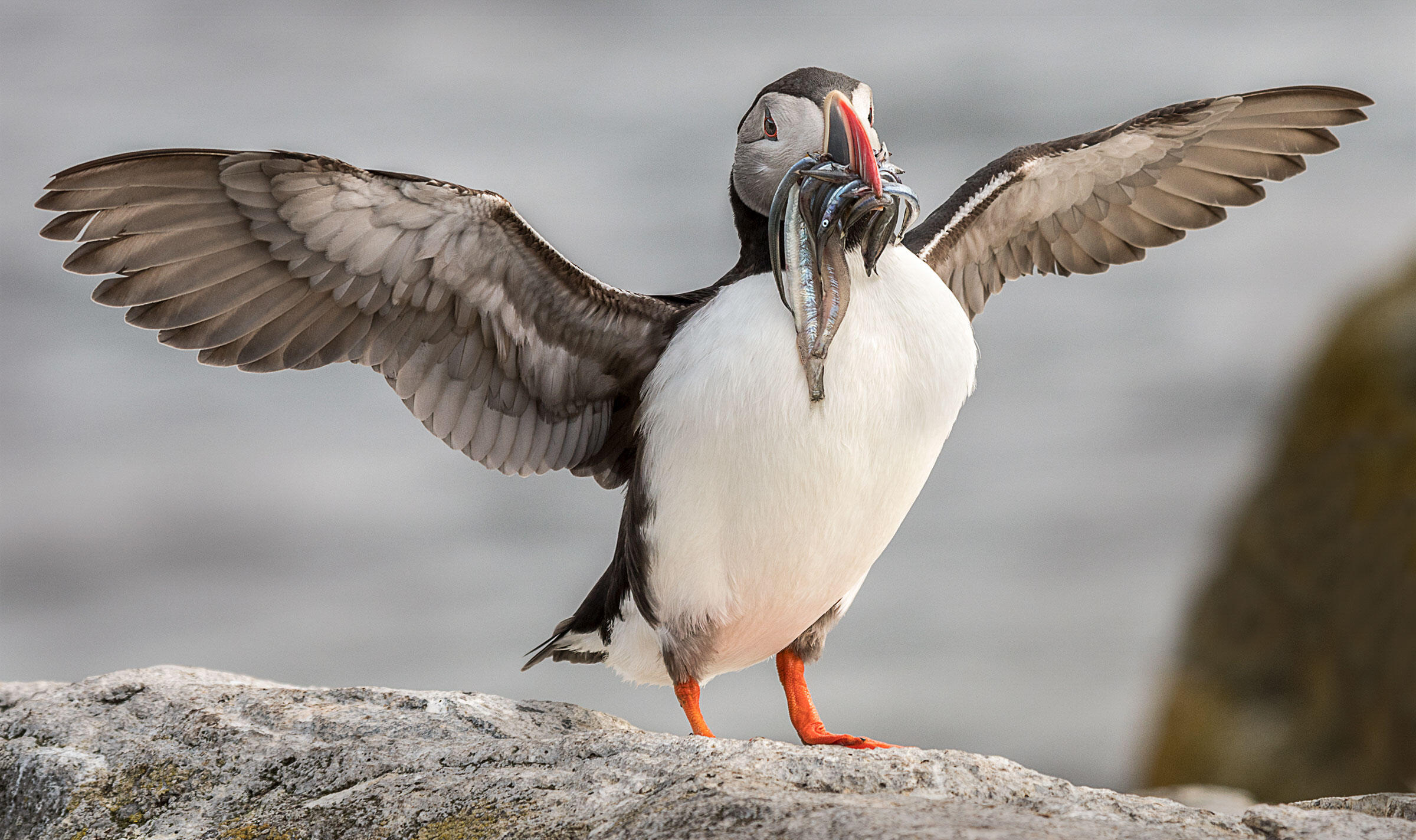 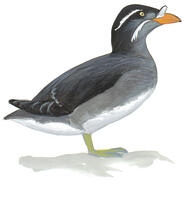 In 2011, an international team of scientists announced that, behind all the diversity and complexity of the world’s oceans, they had detected a striking pattern: Whenever the go-to prey fish for a seabird population dipped below one-third of its peak abundance, the birds began to have trouble producing chicks. That threshold held constant across 14 different seabird species in 7 distinct marine ecosystems around the world, they reported in the journal Science. When Norwegian Sea herring fell below one-third of their highest recorded numbers, for example, it hampered Black-legged Kittiwake reproduction the same as rockfish scarcity around California's Farallon Islands hurt breeding success for Rhinoceros Auklets.

The study was a case in point for the ecological importance of forage fish. The group includes small, fast-growing, short-lived species like anchovies and sardines—fish that form those dense, swirling schools you’ve seen on nature documentaries—along with krill and squid. Forage fish eat microscopic plankton and then become nutritious meals for predators like salmon, seabirds, and sea lions, providing an indispensable link in marine food chains.

Only relatively recently has their crucial role in food webs—or the inadequacy of traditional fishery rules to protect them—come into focus. Ocean advocates say our country’s model of managing forage fish is piecemeal, ineffective, and in need of an upgrade. That’s the idea behind the Forage Fish Conservation Act, a new bipartisan bill, introduced Wednesday, that proponents say takes a precautionary approach to balance rising commercial demand for the fish with their essential ecological role as prey.

“This bill is really an overdue, needed change to federal fisheries law to make sure that, as we’re setting catch limits for forage fish, managers are taking into account how many of those fish need to remain out in the ocean to fill that role in the ecosystem,” says Mike Leonard, vice president of government affairs for the American Sportfishing Association, which represents tackle manufacturers and others in the industry. “For all stakeholders involved, they should all be able to universally agree that these forage fish are important enough that we need to be conserving them.”

Despite their small size, forage fish are big business, making up more than a third of the wild seafood catch worldwide. A few might end up in your Caesar salad or on your pizza, but most commercially harvested forage fish are ground up to meet growing demand for nutritional supplements, livestock feed, and food pellets for farmed fish.

Every mackerel or menhaden that humans mash into meal or oil is one fewer for whales, tuna, and seabirds that rely on them for food. In a study published last December, researchers confirmed that commercial fishing is increasingly and directly competing with seabirds for forage fish, helping to make them the world’s most endangered group of birds, with global populations plummeting 70 percent since the 1950s. David Grémillet, the study’s lead author, summed up the findings in stark terms: "Fisheries persist in starving a vanishing seabird community, like a boa tightening its grip on prey.”

The new bill, sponsored by Reps. Debbie Dingell (D-MI) and Brian Mast (R-FL), aims to loosen that grip by amending the Magnuson-Stevens Act, the law that governs fishing in federal waters. First enacted in 1976, the law created eight regional fishery management councils to set catch limits and otherwise oversee fishing from 3 to 200 miles offshore. Magnuson-Stevens is widely regarded as a major success that has helped to curb overfishing and rebuild stocks.

Effective as it’s been for some fisheries, though, the law wasn’t really built for the unique vulnerabilities of forage fish. They’re susceptible to population busts driven by El Niño events and other environmental factors, and climate change could worsen those crashes. They also tend to gather in easy-to-catch schools even when their numbers dwindle, making them prone to overfishing. And the traditional way of setting catch limits—by looking at a species in isolation, without regard for what eats them—ignores the crucial ecological role filled by forage fish.

“These forage fish basically are dinner for most everything else in the ocean,” says Ellen Pikitch, executive director of the Institute for Ocean Conservation Science at Stony Brook University. Pikitch chaired a forage fish task force that in 2012 issued an influential report calling on fishery managers to set rules that reflect that ecological importance. “When you have a species group such as forage fish, where just about everything in the ecosystem relies upon them, it’s essential that the assessment and the management recognize those roles.”

When that doesn’t happen, the results can be dire. In a draft assessment last month, the National Marine Fisheries Service reported that the Pacific sardine population has shrunk by more than 98 percent since 2006, making it likely the fishery will be mostly closed for the fifth straight year. Scientists say the ongoing collapse is the reason thousands of starving sea lions have washed up on the California shore and Brown Pelicans have had poor nesting success in recent years, threatening the recovery of the once-endangered birds.

The new bill would require regional fishery councils to set catch limits for forage fish that recognize their importance as a food source for seabirds and other predators.

The severity of the sardine crash is largely a result of management failures, according to Geoff Shester, a senior scientist with the advocacy group Oceana. He acknowledges that the fish regularly go through boom-and-bust cycles, but says managers have allowed commercial fishing operations to overharvest them, making the crashes faster and deeper. “It’s basically a lack of precaution,” he says. “It’s literally insane to believe that fishing did not make this worse.”

To prevent future collapses that devastate marine ecosystems, the new bill would require regional fishery councils to set catch limits for forage fish that recognize their importance as a food source for seabirds and other predators. The legislation also stipulates that, should markets develop for forage fish that aren’t currently managed, no new commercial fisheries could target them until the councils review the best available science on how harvesting them would affect ecosystems, other fisheries, and coastal communities with economic ties to fishing and tourism. And it calls for a national definition of forage fish, which Magnuson-Stevens doesn't provide—perhaps an indicator that they haven't received adequate attention from fishery managers.

“Declining fish stocks threaten both the larger marine ecosystem and the coastal economies that rely on them,” said Dingell in a statement. “This legislation addresses a key need by implementing robust, science-based management practices for forage fish to promote sustainable fisheries and safeguard our environmental heritage for the enjoyment of future generations.”

Some fishery managers have already moved in the direction the bill points. The Mid-Atlantic and Pacific councils, for example, have already blocked any new or expanded fishery for forage fish until a scientific review shows it won’t do harm. But there’s no current federal requirement for holistic management of forage fish, and the existing rules are patchy. “Right now, the Magnuson-Stevens Act doesn’t account for the fact that forage fish are the basis of the entire marine food web,” says Charlotte Runzel, policy associate for the National Audubon Society. “There are a ton of threats to seabirds: climate change, pollution, loss of habitat, and overfishing of forage fish. So we’re trying to tackle one of those threats to increase their populations with this legislation.”

At the same time, another bill in the House aims to address one of the other threats: seabird deaths caused by longline fishing. The Albatross and Petrel Conservation Act, introduced by Rep. Alan Lowenthal (D-CA) and Rep. Brian Fitzpatrick (R-PA), would implement an international agreement to protect those imperiled seabirds. Longline fishing operations annually kill an estimated 100,000 albatrosses that chase bait, get hooked, and drown. It’s a major reason why 15 of 22 albatross species worldwide are threatened with extinction, according to BirdLife International. Proponents say that, by joining the agreement, the United States—which has relatively strict rules to protect the birds—will gain leverage in pressuring other countries to adopt practices to protect them.

While the Senate would need to ratify the albatross and petrel treaty separately, the bill to implement it recently hit a milestone: After being introduced in two previous sessions of Congress, the proposal had its first hearing in a House subcommittee late last month. Along with bipartisan support for the forage fish bill, that step forward is a positive sign that, for our long-suffering seabirds, help could soon be on the way.

Audubon magazine is a nonprofit publication, and stories like this are made possible by our readers. Support our journalism by donating today.

Why Maine's Baby Puffins Are Growing So Slowly This Year

Many pufflings still have their immature downy feathers and have yet to fledge—signs of climate change tampering with seabird diets and survival.

The U.S. is setting the standard for ecologically sustainable longline fishing. Now it’s time to make sure the rest of the world gets onboard.