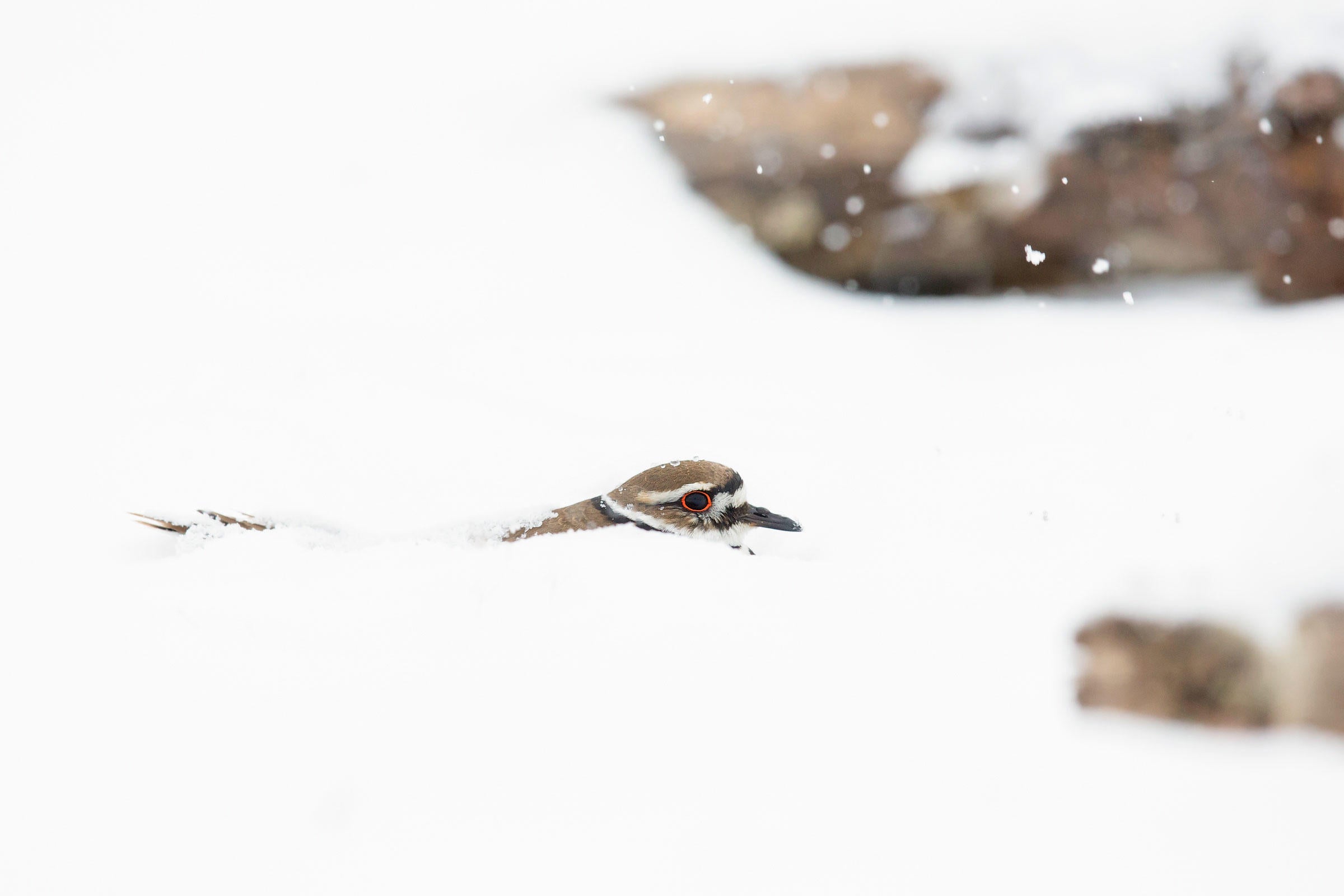 When Groo went to check on the Killdeer nest after a late spring snowstorm, she discovered one parent dutifully keeping the eggs warm. Photo: Melissa Groo

By protecting the Killdeer's nest from harm, Melissa Groo was able to capture one parent's impressive devotion to its eggs.

It was the distinctive, mournful call of a Killdeer that made Melissa Groo stop next to a local church last spring. As a nature photographer, she’s always listening for bird calls, which have led her to discover a wide range of wildlife. She was poised to take a picture of the bird when she noticed another Killdeer nearby, sitting on a nest tucked into the gravel of the parking lot.

An expert on photography ethics, Groo knows that nesting and breeding time is the most important in an animal’s life. “That's how it continues its line,” she says. Since the nest was simply lying on the gravel and the eggs were a similar shade of gray, Groo realized that few drivers would notice it. So after getting permission from the church and waiting until the birds had flown away, she built a makeshift fence around the nest with sticks. She saw four mottled eggs sitting inside.

Several weeks later, a late spring snowstorm descended on Ithaca, New York, coating the ground with thick flakes. Groo immediately thought of the birds. “It was pretty late in the season, and the snow was really wet and heavy and accumulating fast,” Groo says. “I thought, how could the birds not abandon their nest in this sort of situation?”

Groo jumped in her car to check on them. She slowly maneuvered into the parking lot, looking for the parents. “And there I see just the head—maybe the tip of tail—sticking out of the snow,” she says. “The killdeer was so loyal and so faithful to that nest. It was just sitting on the nest, neck deep in snow. It was staggering, and very moving.” She carefully positioned her 600 mm lens on the vehicle’s window and captured a shot of the devoted parent. Even after the snow melted, Groo kept coming back to check up on the family. One day—sitting in her car again—she noticed a tiny head sticking up underneath the adult on the nest. Two chicks had hatched and were soon running about in the sunshine. She returned again and again, watching the little ones grow up, and eventually spread their wings.

The experience exemplifies a principle Groo feels is central to nature photography: “In a world that's presenting so many challenges to birds, I really feel, as nature photographers, it’s incumbent to be as conscientious and careful as we can,” she says—to protect “the miracle of their lives, as evidenced by this Killdeer on its nest covered in snow.”

Don't miss out! The 2018 Audubon Photography Awards close on April 9th. Submit your best bird photos to see if you have a winning shot.

A Rare Encounter With an Even Rarer Bird

Thanks to Mom, a Photographer Finally Gets His Dream Shot

Here, Peter Mather shares the story behind this long-sought image of a Bald Eagle and two eaglets.