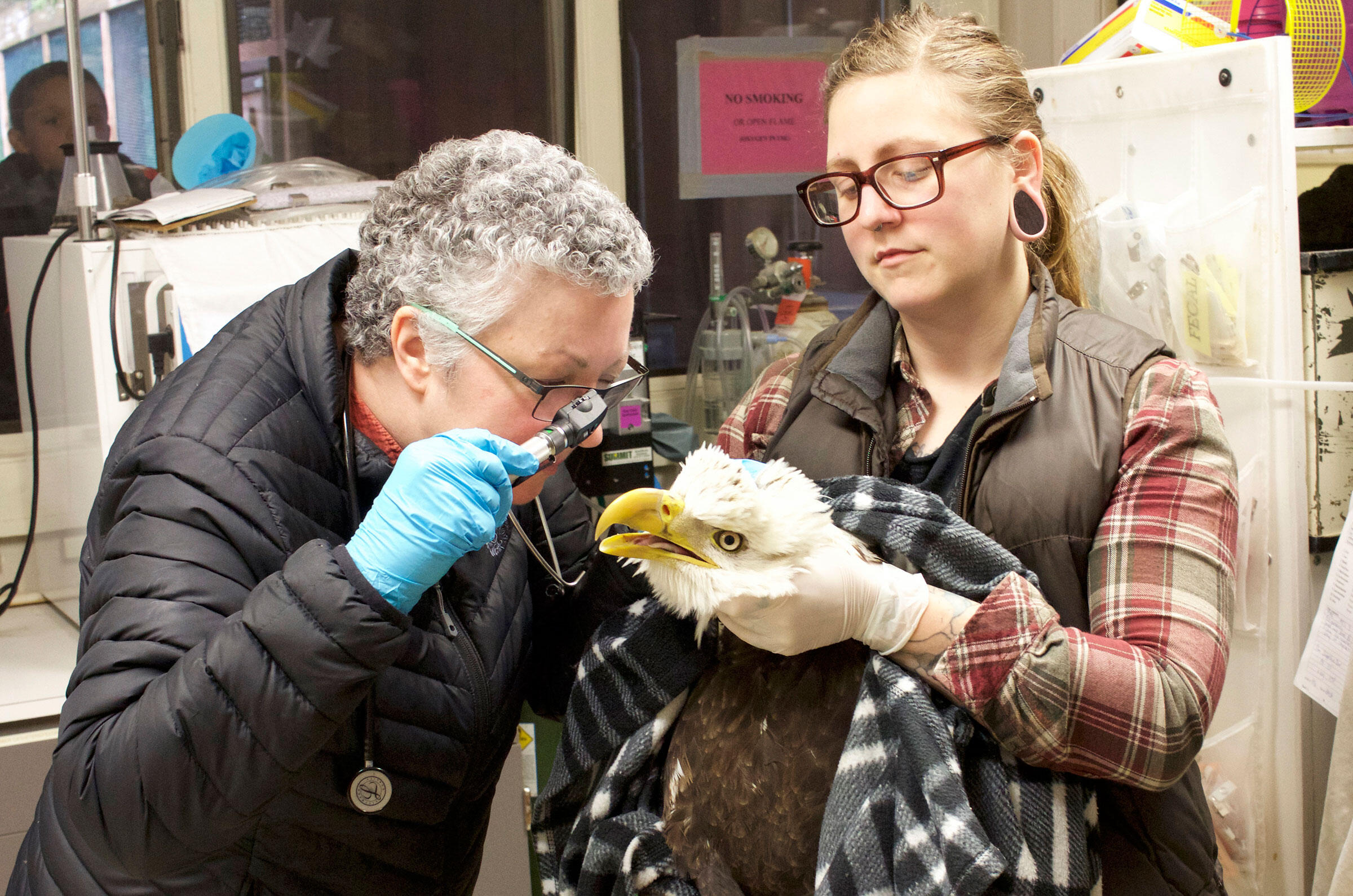 Editor’s Note: The story is reproduced with permission from the Audubon Society of Portland.

On February 10, 2016, the Wildlife Care Center received a call from the Portland Harbor Master about a Red-breasted Merganser tangled in fishing line in the Willamette River. Lacy Campbell, our WCC Operations Manager, and Kathleen Studdert, a volunteer, headed down to the South Waterfront with a small net, box, and towel to cut the bird out of the fishing line and bring it back for assessment.

However, about halfway down to the location, the Harbor Master called again to tell Lacy that the merganser was no longer the only bird in need of rescue. A Bald Eagle who spotted the stationary duck swooped down to try and make the caught bird a meal. In the eagle’s attempt to catch the duck, she became stuck in that very same fishing line.

Remember that small net, towel, and box Lacy brought with her? Those were perfect for rescuing a large duck, but not at all ideal for capturing an injured 12-pound female Bald Eagle.

“We arrived and assessed the situation,” recalled Lacy. “We figured out the easiest course of action would be for me to get into the river and remove the eagle first and then get the merganser out.”

Easy is perhaps an understatement, but thankfully Lacy, who has been at Audubon Society of Portland since 2011, has been handling Bald Eagles since she was a teenager, and was able to make use of the tools she had at her disposal.

“She had one leg and one wing that were caught together in the fishing line and that fishing line was connected to the merganser,” explained Lacy. “The other leg was free. The bird was very alert and very defensive.”

Lacy was able to use the eagle’s grip on the towel to turn the bird upside down, an unnatural position for this species, so that she’d be easier to handle. Lacy then took hold of the other leg as well so she could safely cut the fishing line.

Once the eagle was free, the volunteer was able to retrieve the merganser. Both were brought back to the Wildlife Care Center for assessment and treatment. Sadly, the Red-breasted Merganser had to be euthanized due to the severity of its injuries.

Despite her brief entanglement with the fishing line, an all too common hazard for wildlife, the Bald Eagle appeared to only have minimal injuries, including a slight head trauma that resolved within 24 hours and superficial abrasions.

After an exam and a day of observation, the eagle was brought to our flight cage, where she showed that she was able to fly. She appears to be a healthy bird in her fourth year.

We’re hoping to do a public release with the bird soon. Check back for more details!