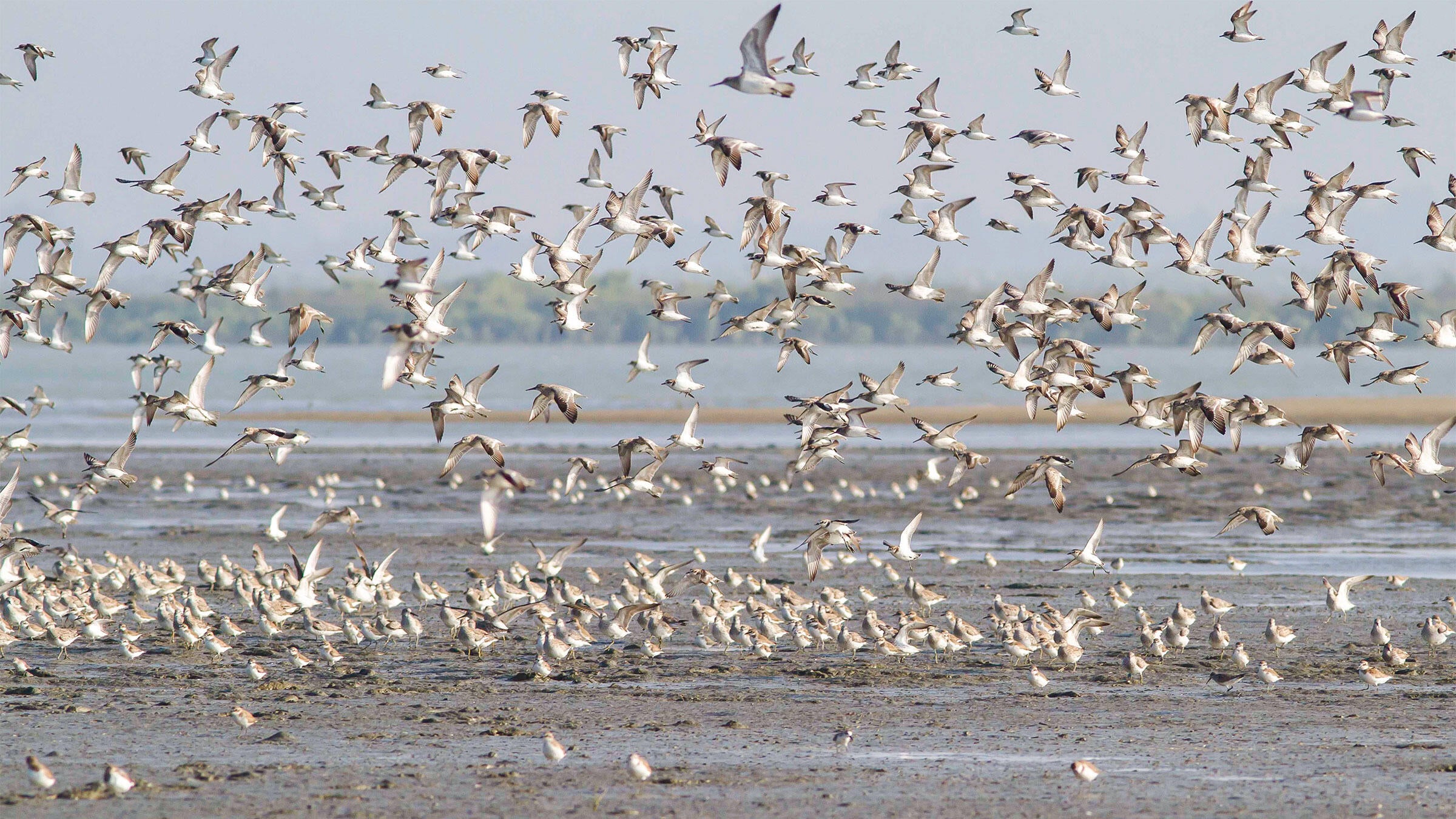 Shorebirds on Bangladesh's mudflats, where an estimated 30 percent of the world's Spoon-billed Sandpiper population spends the winter. Photo: Sayam U. Chowdhury

The Spoon-billed Sandpiper, on the edge of extinction, is finally catching a break after scientists persuaded hunters to become fishermen instead.

As the tide peels back on the Gulf of Martaban, on the northeastern edge of the Indian Ocean, thousands of shorebirds scurry out to the mudflats, forming a tableau of footprints and craters. Among them are Spoon-billed Sandpipers, instantly discernable by their spade-like bills. The sparrow-sized species breeds in the Russian Arctic and spends November to March on Martaban, where it powers up on worms and shrimp. These wetlands in southern Myanmar are so pivotal, they host half of the world’s 100-or-so remaining pairs of Spoon-bills.

But the mudflats aren’t without their dangers. Just as they entice clouds of foraging shorebirds, they also attract subsistence hunters, who use nets to catch curlews, sandplovers, terns, and godwits. And though few would intentionally trap a critically endangered species, sometimes they haul in Spoon-bills as well.

I was on the Gulf this January, rowing through bobbing debris on the edge of Mawlamyine, one of Myanmar’s largest cities (population: close to 400,000). I’d been invited here by the Spoon-billed Sandpiper Task Force, a league of nearly 40 international experts focused on saving the bird from extinction. One of our goals was to scour Martaban’s mudflats for Spoon-bills; so, we broke into three teams and fanned out across the water. The air was humid and fragrant with waves of basil, fish sauce, tobacco, beets, and smoke. Once the tide pulled back, our boats were stranded on a glistening field of mud, forcing us to carry our spotting scopes and slog between vantage points.

Despite the effort, we had little luck. After two days we returned to Mawlamyine to rejoin the other teams. With 40 of the most capable searchers on the job, we’d found a grand total of . . . one Spoon-bill. The Gulf of Martaban is a huge place, and while surveys elsewhere in the region turned up 75 more birds, the devastatingly low numbers in prime sandpiper territory confirmed a long-held truth: The species is in deep trouble.

Scientists first caught on to the population crash in the early 2000s. In response, they formed the Spoon-billed Sandpiper Task Force, with Yevgenii Syroechkovskii of Russia, Christoph Zöckler of Germany, and Sayam Chowdhury of Bangladesh at the helm. Prior to that, Syroechkovskii and the Myanmar-based Biodiversity and Nature Conservation Association (BANCA) had surveyed Martaban and pegged the area as “the last coastal wilderness.” But the task force also found a darker side to the Gulf: In 2010, a study by Zöckler and his colleagues revealed that bird hunting in Myanmar is likely the leading cause of Spoon-billed Sandpiper deaths.

The practice has gained popularity in Southeast Asia in recent years thanks to the availability of thin, nylon nets that snare large, abundant shorebirds—and anything that’s feeding among them. Some hunters pursue birds exclusively, while others do so only when they can’t catch enough fish. At food bazaars or roadside stands, a bigger shorebird will fetch a dollar, while a meager sandpiper will bring in far less. The costs to Spoon-bills, however, are enormous: Given that the birds concentrate at a select few wetlands, a single hunter can have a disproportionate impact. For example, a net holding 20 Spoon-billed Sandpipers can theoretically take out 10 percent of the species.

With this knowledge, Zöckler and Pyaephyo Aung of BANCA zeroed in on Myanmar’s hunting community. They developed an innovative grant program that offers people alternative livelihoods, depending on their needs. In exchange for cheap bird traps, for example, hunters were given up to $500 to buy boats, nets, and other fishing gear. Others received seed money to start new businesses entirely. Killing birds is considered a dishonorable occupation in Myanmar, so it didn't take much convincing on Zöckler and Aung’s part. And though the program is small, it’s been highly successful: Since 2012, 64 men—an estimated 80 to 90 percent of subsistence hunters along the Gulf of Martaban—have signed agreements to abandon their Spoon-bill-netting ways.

A similar problem persists in adjacent Bangladesh, where ornithologist and task-force leader Chowdhury works. In winter, the country hosts up to 30 percent of the world's Spoon-billed Sandpipers. Rather than casting their nets for whimbrel and knots, hunters there typically rig nooses on sandy rises, where birds rest when the tide is high. But their impact on sandpipers is just as severe. Chowdhury has spent years educating villagers about the plight of the Spoon-bill and, like in Myanmar, offers small grants to encourage a transition to other careers. So far, 25 bird hunters have accepted. One is now a watermelon farmer; another owns a tailor shop. Between them, Chowdhury, Zöckler, and Aung have converted so many locals to new livelihoods, they suspect poaching has been all but eliminated on the sandpiper’s key wintering grounds.

Currently, the global Spoon-bill population is stable, but the species' continued survival is far from certain. In the Guangdong Province of China, for example, shorebird hunting remains a serious problem, so much so that any gains made from keeping sandpipers off roasting spits in Myanmar and Bangladesh may be lost in Guangdong. Habitat conversion along the bird’s migration route is also a hulking threat, with many of the intertidal mudflats of the Yellow Sea being swallowed up by land-reclamation projects. Negotiations with North Korea may be the best chance to protect remaining untouched tracts of coastal wetland in the region. To further counter these blows, the Wildfowl & Wetlands Trust in England is spearheading a captive-breeding program that, unfortunately, has yet to yield a surviving chick.

It’s now December, nearly a year after my trip to Myanmar, and the Spoon-billed Sandpipers are back in the Gulf of Martaban. The meek birds almost disappear among the masses of curlews, stints, and plovers as they march across the soft mud. I know Zöckler and Aung are out there, straining through spotting scopes to pick them out; Chowdhury is doing the same in Bangladesh. But where once they looked for signs of extinction, now they’re checking for hints of hope—the fruits of small victories and dozens of changed minds.