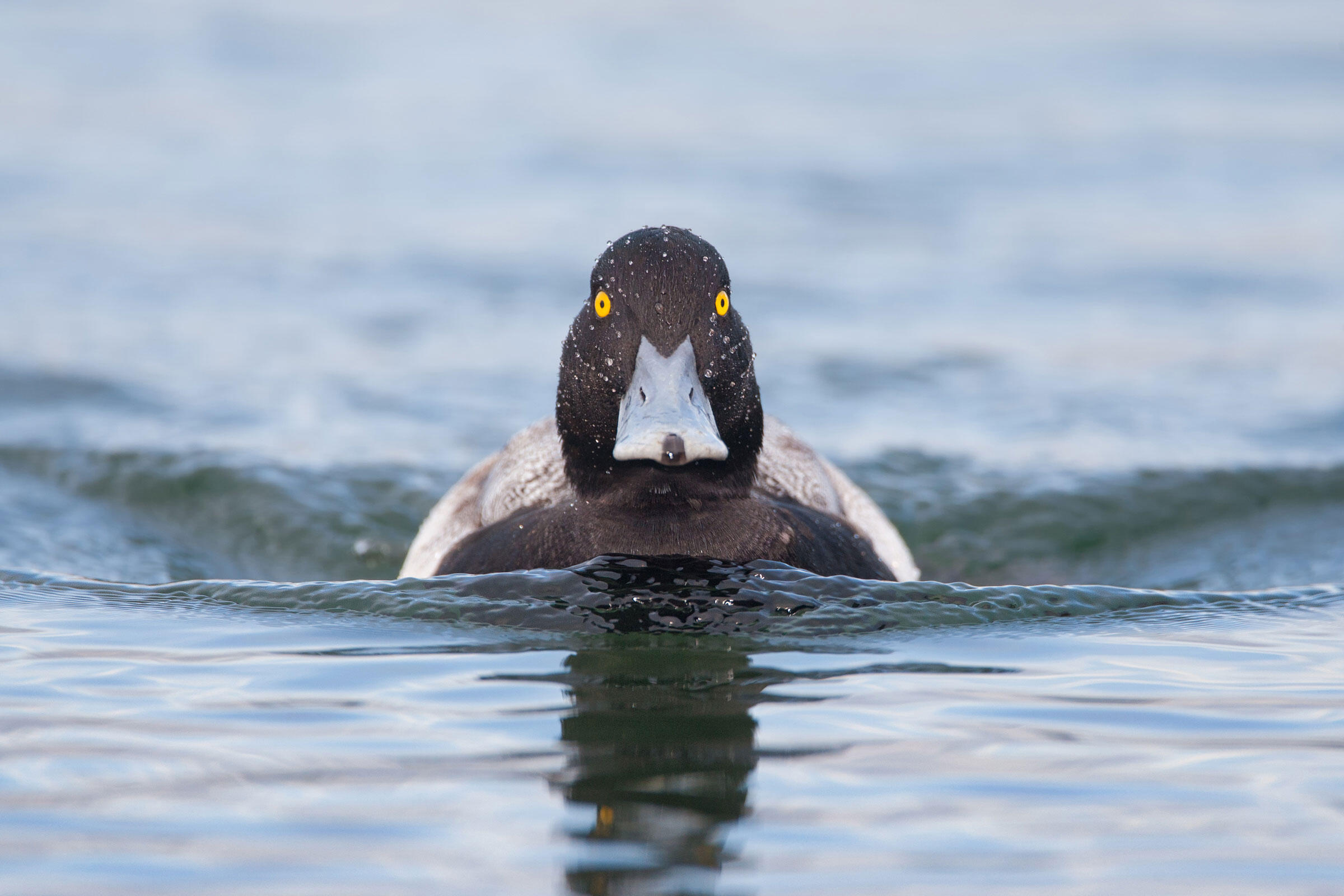 Avian photographers are often attracted to ducks because of their striking plumage. Some of the most colorful and intricate patterns in all of nature are found in the male breeding plumage of the Wood Duck, Harlequin Duck, Mandarin Duck, and Baikal Teal. Their iridescent feathers and detailed markings can make for beautiful images, but photographing ducks has many of the same challenges and pitfalls as any other type of bird photography. Here are some tips that will be especially helpful.

Images of birds generally have more impact if the subject appears to be looking at the viewer, helping to create the feeling of an emotional connection. Capturing a bird with its head turned just a few degrees toward the camera provides that all-important eye contact. This can be especially effective with ducks as they are generally perceived as having more character and personality than other types of birds. (Consider all of the cartoon ducks in popular culture.)

There are a couple of other advantages to having a slight head turn toward the camera. For one, the resulting head angle places the tip of the bill closer to being on the same plane as the eye. This makes it much easier to get them both sharp even when dealing with very shallow depths of field. When combined with a good lighting angle, the slight head turn also tends to provide better illumination of the face and increases the chances of getting a nice light in the eye, which adds life to the image.

An entirely different approach that can also be particularly effective with ducks is to photograph them looking directly into the camera, head on. This requires close attention to depth of field in order to get both the eyes and the tip of the bill in focus.

In most cases, the best way to photograph a bird is to place the camera at eye level with the subject. This brings us into the bird’s world and helps to create a more intimate image. It also tends to make better use of the often-limited depth of field as the bird’s body will be more parallel with the imaging sensor.

For ducks in water, this means getting low and placing the camera as close to water level as possible. The effect of this angle can be almost magical because the foreground and background will often disappear into beautiful washes of color, thereby reducing or eliminating many potential distractions.

Still water can create sharp, mirror-like reflections that add an interesting element to images. It is usually best to emphasize the perfect symmetry by including the entire reflection and placing the water line at or near the vertical center of your composition.

A rippling surface, on the other hand, can often yield interesting abstract reflections, which continually change with the movement of the water. In this case, it’s recommended that you shoot in short bursts in order to capture multiple variations.

Rather than get low, as advised above, reflections can often be enhanced by placing the camera a bit higher than usual.

Whenever you see a duck bathing or preening, it is almost guaranteed that a wing flap will follow. You should prepare accordingly if you want to capture the action.

The first thing to consider is whether you need to zoom out or physically back away in order to avoid clipping the bird’s wings. It is also advisable to get the shutter speed up to at least 1/1600 second in order to freeze wing movement. This may require either raising the ISO or opening the aperture (or both).

The duck will raise its head during the wing flap, so you will want to move your focus point to the top third of the frame. This will allow you to focus on the eye and still have enough room at the bottom to comfortably include the duck’s entire body.

Many duck species have iridescent feathers that can change color and intensity depending on the amount of light hitting them and the angle at which they are viewed.  Iridescence is most often found on a duck’s head and on the secondary wing feathers. Bringing out these iridescent colors at their maximum intensity typically requires direct front-lighting, and you may need to wait for a head turn. On overcast days, some fill flash may be necessary.

Photographs of ducks are enhanced by colorful water that is free of pollen or other surface debris. You can get beautiful blues from the sky on a clear day or a variety of other colors from vegetation or buildings reflecting in the water. You can often get better results by proactively setting up in an ideal location and then waiting for your subjects to enter the “sweet spot.”

Michael Milicia is a Massachusetts-based bird photographer. He also specializes in teaching photography and takes great joy in helping others take their imagery to the next level.

Audubon and his rival, Alexander Wilson, disagreed about the habits of scaup ducks. But that's because they were describing two different birds.