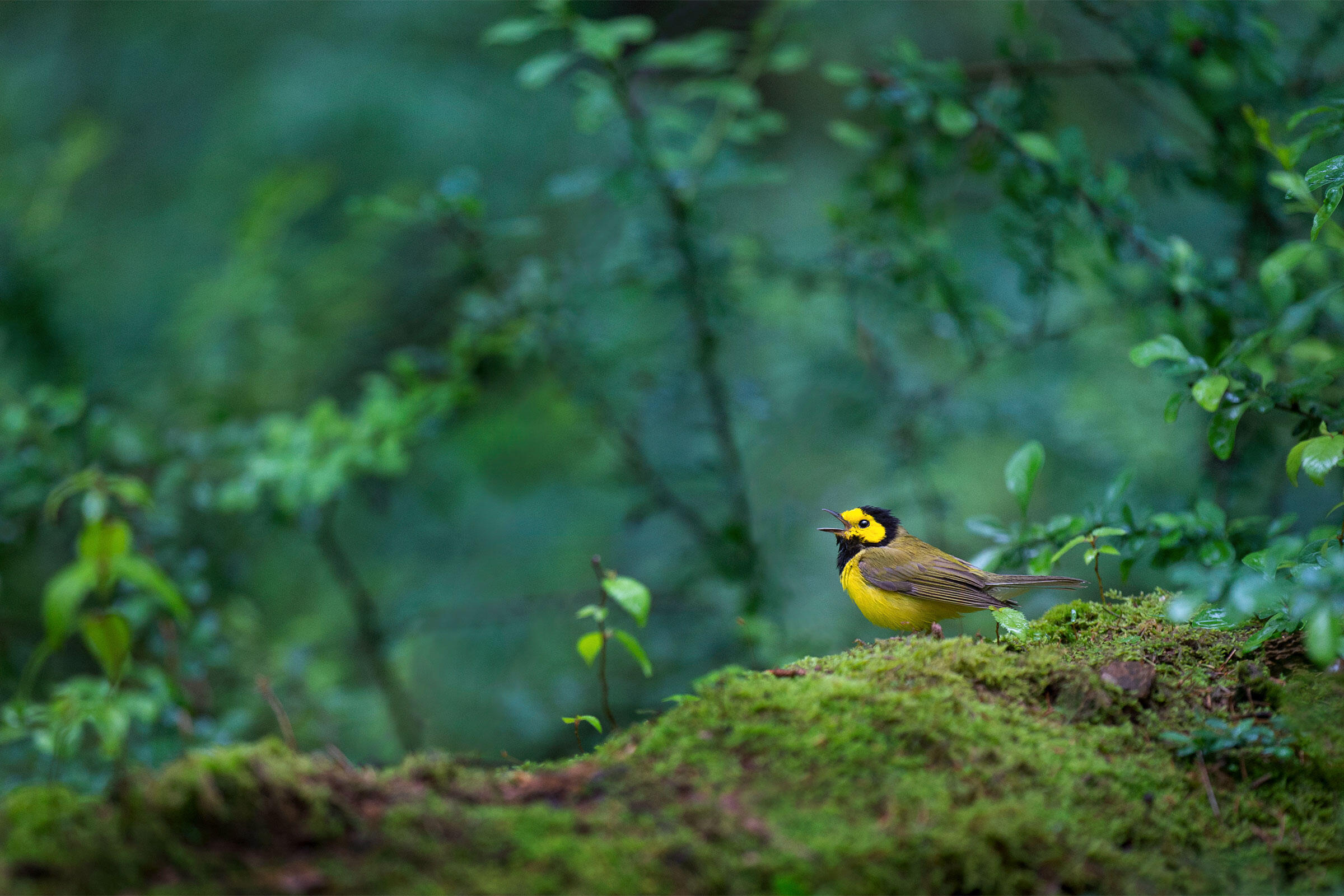 Spring is a joyous season. For me, the first buzzes of an Eastern Phoebe or the liquid, descending songs of a Louisiana Waterthrush signal the start of a steady stream of stunningly beautiful and mellifluous visitors passing through, once again, on their way to their nesting territories. It’s a sign that nature’s rhythms and the cycles of the seasons remain active and strong.

In addition to the brilliant colors of some of our migrants, it’s the songs that trigger the greatest pleasure for me. Standing in one spot in the woods, eyes closed, and hearing the three-dimensional map of the day’s migrant arrivals is exciting and satisfying.

Of course, using these songs to then track down your favorite species requires knowing the singer. And some species can sound very similar to their cousins. Let’s consider a few of these confusing songs—and their spectrograms—in preparation for our upcoming migrant arrivals.

Swainson’s Warblers are highly sought-after birds. Interestingly, they nest in two very different habitats: One population prefers the dense cane breaks of the South, and the other nests near the fast-flowing streams of Appalachia's rhododendron forests. These latter birds are usually easier to see, but they also share their habitat with the very similar-sounding Louisiana Waterthrush. Here’s how to tell them apart.

This species nests along rushing streams, and thus their territories are long and narrow. Although the song starts with clear, descending slurs—very much like a Swainson’s—the ending of the song is the key ID point, containing one, two, or sometimes more very short, chip notes. Swainson’s never sings anything but slow slurs.

This species sings a very simple, clear, slurred song, including the ending.  Even when you hear this skulker, though, it can be tough to see. Cryptically colored, Swainson’s tend to sing from a mid-story perch without moving. You can often catch a glimpse of them as they fly from perch to perch around their large territories. If you can spot where the bird flew from, just wait for it to come back after making its rounds to get a clear look.

One of the fastest ways to narrow down a warbler song is to establish whether it contains a series of buzzy or clear elements. Once you know your candidate is singing buzzes or very fast trills, you have a shorter list of possible species. These three species sing buzzy songs that can sound similar.

A Cerulean song has three sections, each with different qualities. One key point is that the last section is a trill, a bit slower than a buzz, and all on a steady pitch.

From a distance, this species, singing two or three sections of buzzy phrases, can sound like a Cerulean. But note that each buzz has the same quality, unlike the changing qualities in the Cerulean song. And the last buzz has a rising pitch profile, unlike the steady Cerulean ending.

This slower Black-throated Blue song also has rising phrases of similar qualities in each section. Although the Cerulean’s song is rising overall, each section is on the same pitch.

Most Parula songs have similar-quality elements and, although generally rising, end with an emphatic, falling phrase, unlike Cerulean.

This less-common form of the Parula's song doesn’t end with a fast, falling, accented element. Instead, multiple, dense buzzes distinguish it from the more varied, three-section Cerulean song.

Cape May Warbler vs. Bay-breasted Warbler

These two species are stunningly beautiful and always a treat to see. They can also serve as your annual hearing test, as their songs are very high pitched! Making things more complicated, both birds share a similar song format: one section of two-element phrases.

While these species sing similar songs, there are some clear ways to tell them apart. The key difference is that Bay-breasted sings two-element phrases, repeated a few times. And the elements are both of similar pitch.

Cape May Warbler — Example A

As you can hear, this main Cape May song is much simpler than the Bay-breasted song. Each phrase has only one, rising element. Both of these species sing fairly short songs.

Cape May Warbler — Example B

Now, similar to an American Redstart, Cape May Warblers sometimes intersperses more emphatic two-element phrase songs in a singing bout. Although this song has the same structure as one from a Bay-breasted, the elements have more space between them and have a much wider pitch range. This makes them sound more forceful than the smoother Bay-breasted songs.

Okay, so they aren't warblers, but Carolina Wrens are very common throughout the southeastern U.S. and easily confused with several similar-sounding species, including Common Yellowthroat, Northern Cardinal, and the prized Kentucky Warbler. For this comparision, we'll take a look at the Carolina and Kentucky songs.

Caroline Wrens sing loud, and they sing often! This highly vociferous species also sings many different song versions. All of their songs, however, are one-section songs, with the same two-, three-, or four-element phrases repeated. The key to identifying this species is that every song type includes one highly accented, chip-like element per phrase. It’s easy to hear this rough accent, which helps separate this species.

As mentioned before, there are clear songs and buzzy songs (and a few with both types of phrases). Magnolia, Hooded, and American Redstart all sing clear songs with three sections and only one element in their second section.  American Redstarts also often intersperse simpler, one-section songs during their singing bouts. The other two species never do this.

Hooded songs are slightly lower pitched and slower, so they sound richer with smoother slurs. The first section has three slow slurred and low-pitched elements, ending in a slow, low slur. The song sounds deeper and richer than the other two species.

The first section of the American Redstart's song has more and simpler phrases than that of the Magnolia. In this case, six one-element phrases.

We’ve left the most difficult pair to the end. Many warbler species sing two types of songs: One type is the mate attraction song, and they usually the same song across a broad geography of their range. The other songs, often varied by neighborhood, are for territorial protection. Here, for this pair, we’ll only consider their mate-attraction songs.

Our most widespread warbler, the Yellow Warbler's mate-attraction song, often heard as Sweet, sweet, sweet, I’m so so so sweet!, is consistent across its range. If you hear this clear, 3-section song, with expanded, bright elements, you know you’re hearing a Yellow Warbler. The territorial protection songs, however, are quite varied and very similar to those of Chestnut-sided. We can cover those in another article!

This song is the Yellow’s very similar version of the Chestnut-sided’s mate-attraction song. Usually, there are fewer phrases in the first section, and the overall quality is a bit higher, brighter, and less emphatic. That said, I’ve been fooled more than once by this mischief-making sound-alike!

Given our current travel restrictions due to the coronavirus crisis, it may be tough this year to enjoy migrants as they pass through. But if you have a chance to safely maintain social distancing while visiting a nearby park or nature reserve, listen carefully to the songs around you. And hopefully some of the techniques and tips outlined above will help you better parse the warblers you are hearing.