By Tom Stephenson and Purbita Saha 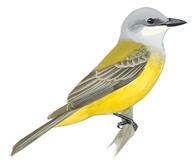 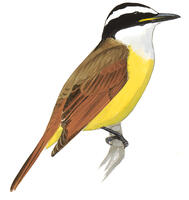 Your email pings: It's a message from the local birding listserv. A Swainson’s Warbler, the first ever for the state, was photographed moments ago. You call out of work (that’s what sick days are for) and drive the 40 minutes to where the bird was last sighted. But once you get there, it’s a ghost town. You check your email, all the relevant Facebook groups, your texts . . . nothing. You need an update, and you need it fast.

The decade-old social media site, which allows users to communicate through 140-character tweets that can also contain images and videos, is all about keeping you updated in real time. Best known for disseminating key information during global crises and broadcasting feuds between the rich and famous (does Piers Morgan versus the Beyhive ring a bell?), Twitter can be a prized source of birding news, too. It can clue you into rarities in your area (like said Swainson's Warblers), help you stay with the masses at festivals and events, and open up opportunities for discussion with other birders. Through tweets, one person can share their knowledge with millions of interested individuals. There’s no such thing as too much information on Twitter, and it's this quality that makes it a perfect platform for birders.

The first step, naturally, is to create your own Twitter account. If you want to get it to go—a must for use in the field—download the Twitter app on your phone. The experience can be addictive and might seem overwhelming at first, but there are ways to filter your feed—a live listing of all of the tweets from the accounts you follow—to make it less chaotic. Here’s how you can customize your Twitter experience to best meet your birding needs.

It might seem strange to start out a how-to guide by recommending an advanced feature, but you'll quickly realize that the faster you can narrow down the deluge of tweets that are sent every minute, the better. You can rely on the general search bar to track hashtags and users (see the "Local Lingo" entry below for more on that), but advanced search lets you quickly get into the nitty-gritty if you're trying to research any bird sightings or news in your area. From there you can target words, dates, location, and handles to really hone the results.

If you want updates on a rarity that you're already aware of, use the species name, location, habitat type, and date mentioned wherever you first saw the sighting (email, Facebook, or another tweet). This will help you find people tweeting about the bird. So, for example, you might search "Painted Redstart," "Manitoba," and "record" between October 27 and October 31. If you’re looking to do a blanket search for strange visitors in the area, use the American Birding Association’s rarity code list and the location. Birders rely on this ranking system to denote extraordinary sightings, both on social media and on eBird. Code 3s, 4s, and 5s are the most drool worthy; Code 6s are escapees—or extinct birds.

Of course, one of the best ways to stay on top of local and rare sightings is by following people. To figure out which folks in your area use Twitter to report species, do an advanced search for any terms related to birding in your geographic area. If it looks like the people who turn up frequently tweet interesting sightings or bird news, then follow them.

Other prime users to add may be members or staff at regional birding clubs, wildlife refuges, banding stations, university ornithology programs, and Audubon centers or chapters. So be sure to also check organizational accounts to see which handles they retweet (to re-share someone's post on your own feed) and follow those. Finally, if you want to do some real digging, look up the most proficient eBird listers in your circle and check if they have a corresponding Twitter account.

Also be aware that some birders have two handles, with one just reserved for sightings. These are the accounts you want to follow. You only need a few birders to keep your feed fresh and local; once they pick up on a hot sighting, they might retweet it and send it your way.

It's also helpful to follow national and international accounts to be aware of what else is out there (and to just live vicariously). Birds can go anywhere; who knows, maybe your neighborhood will get a mention! Here are a few general accounts you might want to check out.

Depending on how many people you follow, tweets can get buried almost as soon as they appear in your feed. How do you make sure you don’t miss the good ones? Once you’re following someone, you can get a text message every time they send a tweet by selecting “Turn On Mobile Notifications” through their profile on the app. Unfortunately, there’s no way to filter the alerts, so choose wisely. To keep the blitz at a minimum, you might only want to use this feature for accounts devoted to birding—and only during peak migration times, when more wayward species are bound to pop up.

Another way to sift through the information is to make lists, which allow you to group different accounts and aggregate their tweets. Organize each list by geography or category: sightings, news, gatherings, photography, podcasts, science, lame bird humor, etc. If you’re planning a trip or attending a festival, you can make a temporary lineup with the top birders in the region or featured guests. To see the tweets from all your lists side by side, try Tweetdeck, an extra Twitter application that’s free for users.

Use It in the Field

Once you’re comfortable with the Twitter landscape, start folding it into your regular birding ritual. You can plan out trips to target rarities and keep tabs on them if you can’t get there right away. Even if your local birders aren’t heavy tweeters, you might see a flurry of activity when a special species is in town. (The advanced search works great in these cases, as long as you have a species name, solid geographic area, and date range.) Here are two examples.

In January of this year, New York City experienced its first Couch’s Kingbird on record. The bird stuck to the same neighborhood in lower Manhattan, but it moved between fire escapes. Luckily, birders who gave chase were able to follow the conversation through a series of timely updates by people on the scene. Many posted photos and exact intersections of where the Couch’s was seen.

Wow first the Cassin's in Brooklyn now a Couch's Kingbird in The West Village. pic.twitter.com/xEPUNuQ978

Anyone looking for the Couch's kingbird, it's flying back to West 4th & West 11th intermittently

Meanwhile, in South Dakota last winter, a Great Kiskadee helped fire up a usually quiet Twitter scene. Birders tracked the bird for months, until news broke of its tragic parting.

The South Dakota Great Kiskadee continues, seen in below zero temps this morning, thanks to food provided by the homeowners #birding

Oh no, the South Dakota Great Kiskadee has died. https://t.co/cpDtLTH0Sh

Birding is all about the details, so with Twitter's 140-character limit, people try to pack in as much information as they can into a tweet. That might mean swapping species names for “alpha codes,” a system created and refined by bird banders and now also used by some birders. Some places might also have nicknames for heavily visited areas. Do your research by reading up on local blogs and noting eBird hotspots. If there are guides or Audubon groups in the area, reach out and ask for advice.

Hashtags are also a good rallying point for some birding communities. Just enter a hashtagged term into the search bar, and Twitter will generate a list of all tweets and accounts also using the hashtag. In New York, for example, #birdcp is used to collect interesting sightings from Manhattan’s Central Park. An automated account @BirdCentralPark then tweets out all the messages that include this hashtag. On the California coast, @PointReyesNPS will keep you updated on nifty #seabirds. Festivals also inspire their own stamps: Attendees at the Biggest Week in American Birding are encouraged to include #biggestweek or #BWIAB when reporting sightings. In a busy festival atmosphere, it helps to have a quick outlet like a hashtag-generated timeline to track spontaneous events.

Tweets are a way to communicate en masse, but they can be surprisingly personal, too. If your tweets mention specific tags or users, they'll likely elicit a response. You can seek ID help, jump in on discussions, or request more information. Sometimes birders won’t reveal exact locations for rare sightings to protect the birds from harassment. If you ask them, however, they might follow you back and send you a private message with directions on how to find the species.

Beyond rare sightings, tweets will expose you to broad range of bird-centric conversations and personalities. Most U.S. birders are driven to use Facebook and email to disperse the news and connect with each other. While both of those mediums have their strengths, Twitter works much faster, immerses you in the experience, and expands your birding circle. It’s convenient for pre-trip planning and in the field, and will make the thrill of the chase all the more exciting.

Correction: The alpha code system was not created by the American Ornithologist's Union as previously stated in the piece.