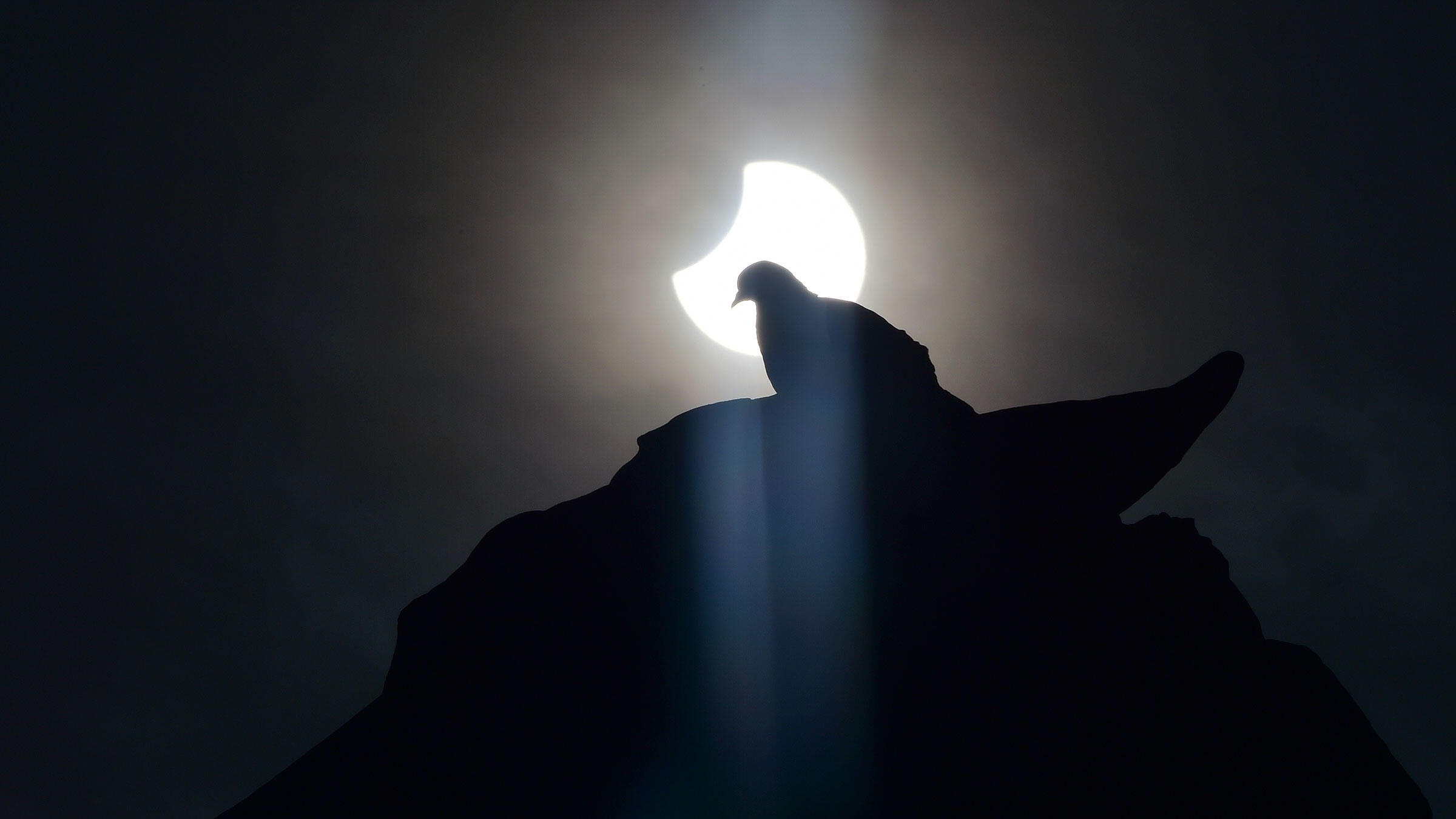 A partial solar eclipse frames a pigeon. How do the birds react when the lights go out? Scientists want you to help them figure it out. Photo: Giuseppe Cacace/AFP/Getty Images

How Weird Will Wildlife Get During the 2017 Solar Eclipse?

To find out, two smartphone apps will give amateur naturalists and astronomers the ability to record their observations during the event.

Elise Ricard’s first total eclipse was five years ago, when she stood foot-deep in sand on Australia's coast and watched the sun and the moon align. But as the sky plunged into darkness, she felt something else shift in the air.

“The couple-hundred human observers weren’t the only ones noticing something strange happening,” she says. “I distinctly remember the noisy birds in the jungle behind me going silent as totality hit the beach.”

That moment has stuck with Ricard ever since—and now, she has the opportunity to understand it. She’s working with the California Academy of Sciences, where she supervises public programs, to crowdsource data on wildlife behavior during the August 21 solar eclipse. On this day, along a 60- to 70-mile-wide “path of totality,” the moon will completely block out the sun and cause the sky to go black in the middle of the day. The moon's full trip across the country will take about 90 minutes (starting around 10:15 a.m. PST and ending around 2:45 p.m. EST), but each given location will experience only about two and a half minutes of total eclipse. The last time the U.S. mainland experienced this event was 1979, the same year Jupiter’s rings were discovered by a NASA spacecraft.

Because total solar eclipses are so rare, there’s sparse information on how nature reacts to sudden nightfall. To gather more clues and hopefully reduce some of the mystery, a number of citizen-science projects are calling on observers to report eclipse encounters with animals and plants. Here are two of the most bird-centric ones.

For Monday, the California Academy of Sciences' free iNaturalist app is spinning out a special feature called Life Responds that lets users log wildlife sightings 30 minutes before, 5 minutes during, and 30 minutes after the eclipse. They can add notes and photos for every organism that’s spotted or heard. It isn’t necessary to identify every species; the iNaturalist community can jump in later and help with that.

The American Astronomical Society website shows when different parts of the country will experience the eclipse. Be sure to protect your eyes by wearing special solar glasses (not sunglasses) and following NASA's safe-viewing strategies.

So what exactly should contributors look for? “Focus on the change,” Ricard says. “Did vocalizations stop? Did a new species appear or disappear? Did movements change? Did a flower fold its petals or a bird return to the nest? We are hoping to use the power and numbers of citizen science to collect as much data and as many observations as possible.”

The California Academy of Sciences also has a few tips on how to collect the best intel. First, try to find an observation point away from human disturbance. Locate the species you’d like to study before the eclipse. Once it begins, do your best to remain quiet and still so you can document wildlife behavior without influencing it. And be sure to record notes even if nothing seems to happen—this in itself is a valuable piece of information.

Ricard and her team also want to figure out what percentage of totality provokes a response in animals and plants. This means people don’t have to be in a sweet spot to participate. (To find the totality of your location, check out this map.) The compiled data will be shared online, both in raw form and with expert analysis.

The biggest change people might notice during the eclipse is audible, not visible. Birds will likely act like the sun is setting for the night, says Scott McWilliams, a wildlife ecology professor at the University of Rhode Island—and may quiet their voices to match.

"Most songbirds will treat it as nightfall, as long as they’re in the 100 percent in the eclipse pathway,” McWilliams says. “Diurnal songbirds will become quiet; noctural birds the opposite. Thus, for the most part, silence will follow the darkness.” After the sun peeks out again, the chorus will resume as if it’s a brand-new morning. But because it's August, not spring, don't expect many species to burst into dawn songs. Keep an ear out for Red-Eyed Vireos, Northern Cardinals, and other birds prone to late summer crooning, along with non-avians like common true katydids, frogs, and toads.

The Eclipse Soundscapes Project seeks to collect audio recordings of this unusual event and turn them into a multisensory experience. Led by astrophysicist Dr. Henry “Trae” Winter, along with the Smithsonian Astrophysical Observatory, NASA’s Heliophysics Education Consortium, and other partners, it aims to sample audio from a variety of environments, including national parks and urban settings. Contributors can use any smartphone app or handheld recorder of their choice to capture a spectrum of sounds, starting half an hour before the eclipse and lasting until half an hour after. (Be sure to record your location as precisely as possible, ideally with GPS coordinates.) Then, following the eclipse, upload the file at eclipsesoundscapes.org.

In addition, the iPhone Soundscapes app has a few features to help visually impaired individuals experience the eclipse. Its "rumble map" features photos of the various eclipse stages. When a user touches an image, the phone screen will vibrate with a strength relative to the stage's light. The app can also play audio narrations of the eclipse's progression in real time, using the phone's location to track planetary movements and provide some astronomical context to audible changes in the soundscape.

Ultimately, Winter’s crew wants to compile all the submissions into a free open-source database. “We can’t base science on the actions of a few individual birds in an isolated location,” says Kelsey Perrett, public relations coordinator for Eclipse Soundscapes. She’s hoping audio submissions along with anecdotal evidence from birders across America will lead to better scientific understanding around wildlife and eclipses—and possibly change how we look at our next solar eclipse in 2024.