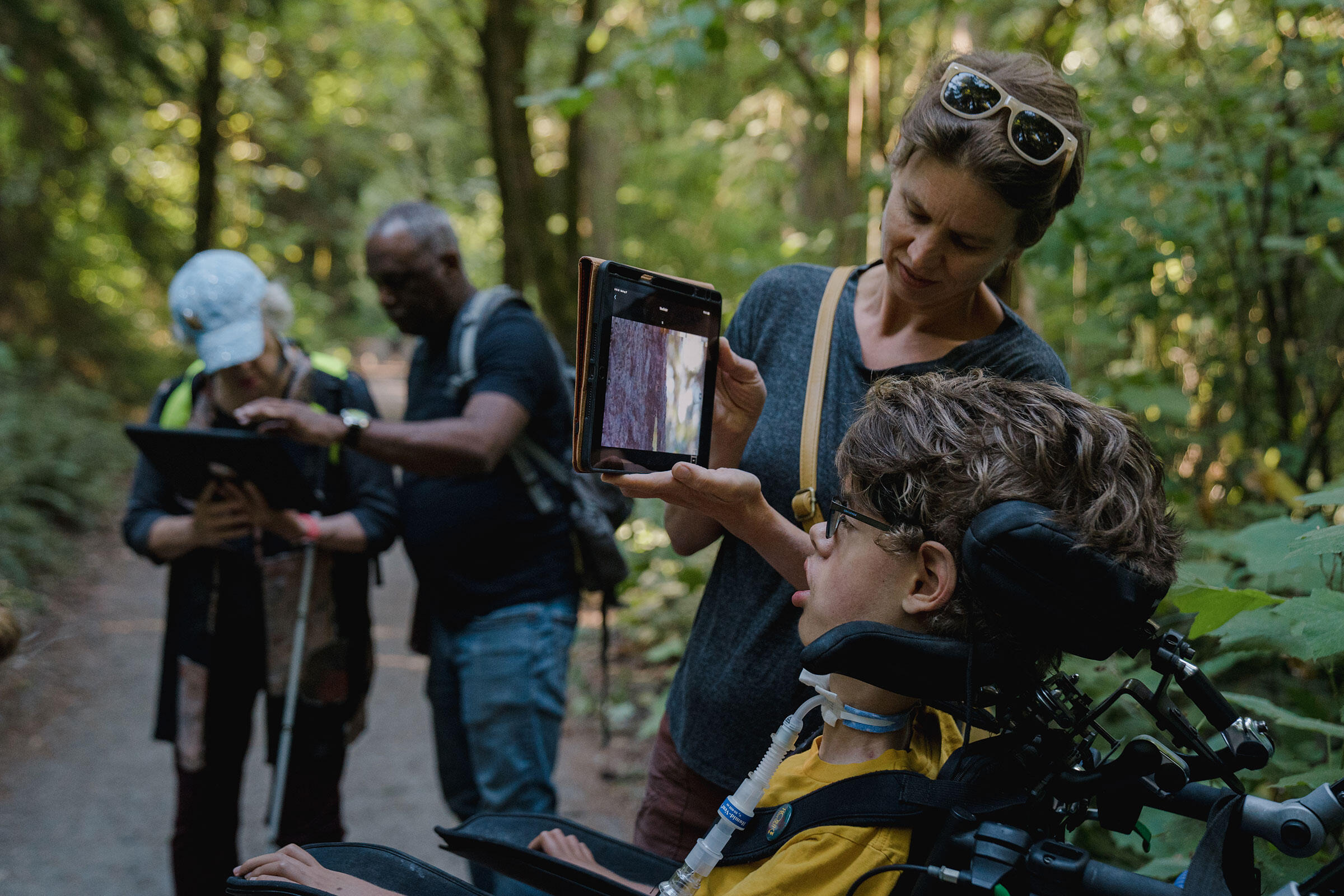 Lucas Hanson looks at a Brown Creeper nest in a Douglas Fir tree on an iPad held by his mother, Krista Hanson, during a guided trek at Seward Park in Seattle. Seward Park Audubon Center’s Lead Naturalist Ed Dominguez used wifi binoculars during the outing to help Lucas—who has limited mobility and vision because he was born with myotubular myopathy—see trees, birds, and other natural wonders more easily. Photo: Jovelle Tamayo

On a recent outing with Seattle’s Seward Park Audubon Center, a small group put the technology to the test, with promising but mixed results.

On a brilliant August morning in Seattle, a man peers through a pair of binoculars, fixing his gaze on the shaggy bark of a Douglas Fir. Its impressive column rises alongside the wide, flat trail snaking through this vestige of urban forest, and a small knot of people are gathered beneath it, staring intently at iPads.

“So are you looking at that hole in the bark there?” Krista Hanson asks the man with the binoculars.

“I’m trying to take a picture of it,” Ed Dominguez replies as he fiddles with the heavy binoculars. “It's the Brown Creeper nest.”

Dominguez aims the viewfinders at a flake of bark looping away from the tree, creating a narrow vertical opening now partially stuffed with twigs. In anticipation, Hanson cradles an iPad in front of the delicate frame of her son Lucas, a 13-year-old boy with glasses and tousled blond hair in a wheelchair.

“How about this, Ed? Just stick with the video,” suggests Joey Manson, second iPad in hand. Almost instantaneously, a close-up view of the nest streams onto the iPads in front of Lucas and Barbara Oswald, whose red-tipped cane is tucked in the crook of her arm as she tips her wavy white curls toward the video some six inches away.

The Seward Park Audubon Center, which Manson directs, organized this morning’s outing with the wifi binoculars and iPads in part as a birthday celebration for Lucas, a budding writer who has grown up rolling around the center’s paved trails and watching hummingbirds hover around its feeders. Because Lucas was born with myotubular myopathy, a condition that affects his muscles involved in movement and his vision, his mobility is extremely limited. As he explores the trail from his wheelchair, he relies on a ventilator to breathe and has a nurse following closely. When Dominguez, the center’s lead naturalist, excitedly points at something, Lucas’s parents help him reposition his head toward that natural wonder.

For the occasion, the family also brought their neighbor Oswald, an athletic 68-year-old artist who is legally blind and has only a very narrow field of vision in one eye. “I have to pause and use my brain to imagine what is it that I'm actually seeing,” Oswald says.

Today’s goal is for Dominguez to guide the group through Seward Park’s old-growth woods, using the wifi binoculars to bring difficult-to-view elements of the natural world live to the iPads where Lucas and Oswald can more easily try to observe them. The technology is relatively new and designed for hunters, but Manson hopes to adapt it into a tool for improving the accessibility of wild birds during outings.

The center’s use of the wifi binoculars represents a micro-experiment in expanding how some people might interact with nature.

“It's not actually a binocular,” he explains. “It's really a digital camera. The other side is a distance finder, a wind detector, and night vision.”

The center’s use of the wifi binoculars represents a micro-experiment in expanding how some people might interact with nature. While he enjoys getting outside, Lucas says he sometimes feels “very” frustrated when he can’t see the same wildlife wowing the rest of his family—and a still photo won’t always cut it. That’s why, when Manson recently offered to let the family borrow the wifi binoculars, they enthusiastically agreed.

On day trips around the Seattle area, Lucas found new delights during hikes. The binoculars helped highlight large or slow-moving creatures that previously sat out of easy view or were obscured by a lack of contrast. He insisted his family make a list of the wildlife he observed: turtles, ducklings, a Blue Heron resting, a juvenile Bald Eagle soaring across the blue sky, even an otter poking out of some reeds

His mother and Manson then brainstormed today’s guided trek through the park, this time with a naturalist wielding the binoculars and identifying the forest’s gems for Lucas and Oswald. The excursion also serves as a sort of practice run for Manson and the center's staff.

Later in the morning, Dominguez suddenly calls out, “Oh, oh, Pileated Woodpecker, right to left.” A flurry of excitement erupts. Ears strain toward the juvenile bird’s clucking call and heads turn as a woodpecker swoops overhead.

“Get your devices ready,” Manson says. Three woodpeckers pop in and out of view. But the technology proves as finicky as the woodpecker family is elusive. Oswald’s tablet has trouble connecting to the binoculars. The video stream is shaky and rarely in focus as Dominguez sweeps the canopy, trying to pin the binoculars’ view on the coy red-headed birds.

Attitudes are buoyant but the day’s reviews of the binoculars are mixed. They seem less suited to capturing glimpses of small, quick-moving creatures and best for big or relatively stationary animals, like the dabbling ducks the group later would see by the lakeshore. “The technology was a little glitchy,” says Lucas, but, “pretty cool.” For Oswald, the binoculars were not particularly helpful, though she thinks using a tripod might stabilize the view while zooming in on a target. “Because of the intensity of the magnification, any movement, ever so slight, basically made an abstract painting out of what would have been a clear view,” she says. 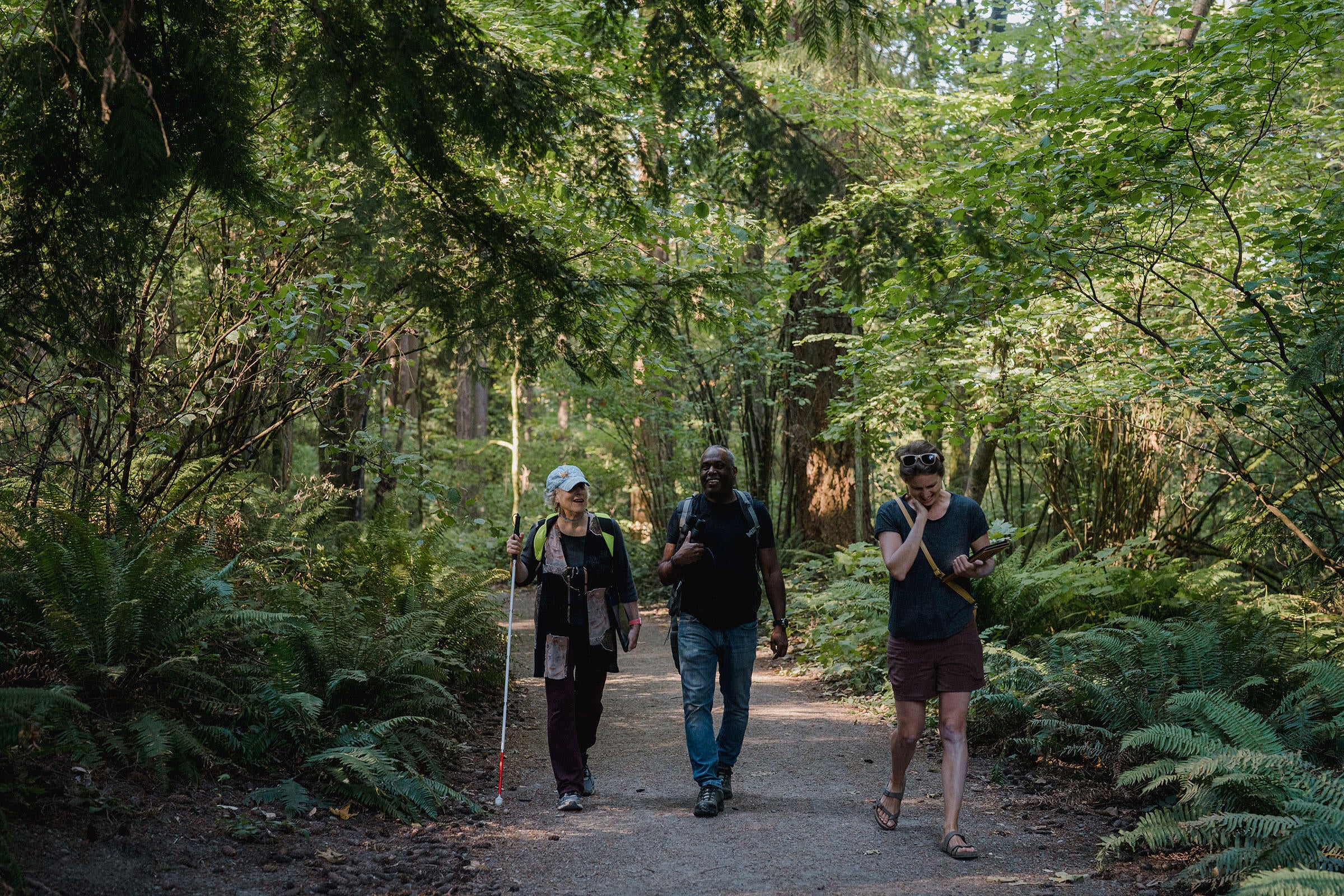 Still, Oswald values these rare chances to explore the woods. She can’t drive and relies on other hikers to bring her along. Just getting to a trailhead, even an accessible one, is a common challenge for many disabled people. So is collecting enough information ahead of time about accessible features like parking, benches, or restrooms—and about barriers to using them, according to Syren Nagakyrie, who has long fostered a connection with nature and grew up with multiple disabilities and chronic illnesses. And, they add, accessibility goes beyond the physical.

“People haven't thought about the larger experience and what it takes to get there, what it takes to plan, what it takes to even feel like that is something that is possible and accessible to you,” they say. Nagakyrie founded the group Disabled Hikers in 2018 to create a like-minded community and share the resources the diverse range of disabled outdoor enthusiasts need to undertake adventures.

Lucas and his family have hit similar roadblocks. “If you don’t see disabled people out, it’s not because they don’t want to be there,” says Krista Hanson. In 2020, the pandemic shuttered many beloved—and accessible—spaces for Lucas, like the local aquarium and natural history museum. Turning to the outdoors more, as many others did, presented its own challenges, and the family created a website, Rolling Washington, to share their experiences with the wheelchair-accessible hikes they explored.

Today’s trail through Seward Park is among them. Manson and his team are constantly searching for ways to improve the experience, and planning, he stresses, is key: having enough staff to support everyone’s needs, for instance, and starting the outing at a trailhead with accessible parking rather than at the center’s entrance down a steep hill. Still, he suggests technology has a role, and the consensus is that the wifi binoculars could have potential—with tweaks—to be useful for some disabled naturalists, especially if the binoculars get lighter and more reliable.

The woodpeckers now are no longer visible to anyone. But Manson has Dominguez point the binoculars at a telltale rectangular hole the birds created pecking for insects in a cedar. “Oh yeah, nice one,” says Lucas, watching it appear on screen.

Despite some technological setbacks, the eighth-grader describes the outing as “awesome,” and is prompting his mother to schedule another one before today’s even ends.

“It’s really fun and cool to be outside in nature,” he says. “It might take me more time, but I can experience the same things as other people.”