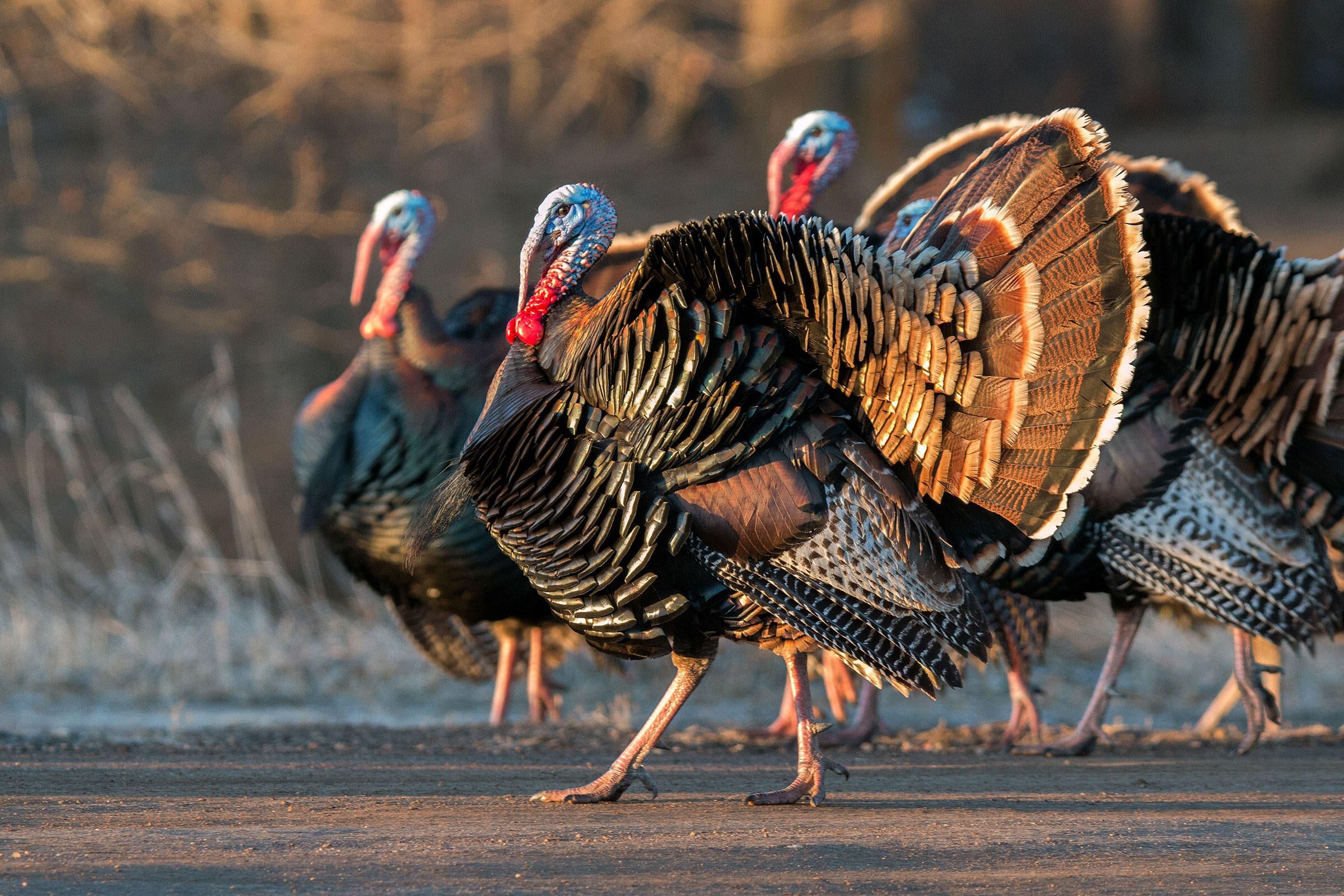 You'd be hard-pressed to find a turkey in the Northeast 50 years ago. Now hundreds of thousands roam suburbs where they thrill and bully residents.

In suburban New England, gobbling gangs roam the streets. Wild Turkeys, each weighing in at 10 or 20 pounds, loiter in driveways, trapping residents inside their homes. They lounge on decks, damage gardens, and jump on the car hoods. Flocks of 20 or 30 birds roost in backyards, while particularly plucky turkeys chase down mailmen and the occasional police cruiser. They even fly (granted, not very well) across highways; one left a turkey-size dent in an ornithologist’s windshield. So far in 2018, the Massachusetts Division of Fisheries & Wildlife, or MassWildlife, has received 150 turkey-related calls and complaints, primarily from residents of densely populated counties in the southeast and Cape Cod. These are the Wild Turkeys of New England, and they’ve taken over.

The turkeys’ subjugation of New England residents is a relatively recent phenomenon. Just 50 years ago, the Wild Turkey population in New England was essentially non-existent, and had been for over a century. Then, an extensive, coordinated effort to trap and transfer turkeys across state lines rejuvenated the population—a comeback lauded by wildlife biologists and agencies as a conservation triumph. “It was an all-hands-on-deck restoration effort,” says Chris Bernier, a wildlife biologist at the Vermont Fish & Wildlife Department. “It’s a fabulous success story.” But now, with turkeys practically running the show, agencies must find a balance between celebrating the Wild Turkey revival and ensuring that human and bird get along. “We’re at opposite ends of the spectrum from where we were 50 years ago,” says wildlife biologist David Scarpitti, who leads the Turkey & Upland Game Project at MassWildlife. “It’s gone from a conservation success story to a wildlife-management situation.”

Before Europeans first colonized New England in the 17th century, an estimated 10 million Wild Turkeys stretched from southern Maine to Florida to the Rocky Mountains. As settlers spread out across the continent, they cut down forests as they went—and New England took the biggest hit. Forest area decreased 70 to 80 percent in Massachusetts alone in the first half of the 19th century, says Jim Cardoza, a retired wildlife biologist who led the Turkey & Upland Game Project at MassWildlife during the 1970s conservation effort.

By the mid-1850s, New England’s turkeys had all but disappeared.

As a result, the birds lost not only the cover of their habitat but also their food supply of acorns and chestnuts. Without hunting restrictions, hunters picked off any Wild Turkeys that survived the deforestation. By the mid-1850s, New England’s turkeys had all but disappeared. In the 1930s, biologists released hundreds of captive-bred turkeys into the region to try and resuscitate the species, but these domesticated birds couldn’t survive in the wild.

In the 1960s, biologists began to explore the idea of trapping Wild Turkeys, primarily from New York, and transporting them for release in New England. Biologists like Cardoza and his team sat in their trucks on cold winter mornings, sometimes for eight hours, waiting for Wild Turkeys to follow the trail of cracked corn, wheat, and oats to an open farmyard or pasture. Once 20 or so birds had gathered, Cardoza fired a 2,625-square-foot cannon-net towards the gaggle to capture them before tagging the birds for relocation.

Massachusetts captured 37 Wild Turkeys from New York’s Adirondacks in the 1970s and released them in the Berkshires. Vermont relocated 31 New York turkeys in the mid-1960s, and Connecticut, Maine, and New Hampshire participated in similar programs. By that time, the New England human population had migrated and condensed into cities, and forests and food had returned to much of the abandoned farmlands. Turkey predators like cougars and wolves had been extirpated, and the entire region created hunting restrictions to protect the birds. All the while, trapping and relocation continued between and within states—and soon New England’s Wild Turkeys, once considered extinct, were resurgent. 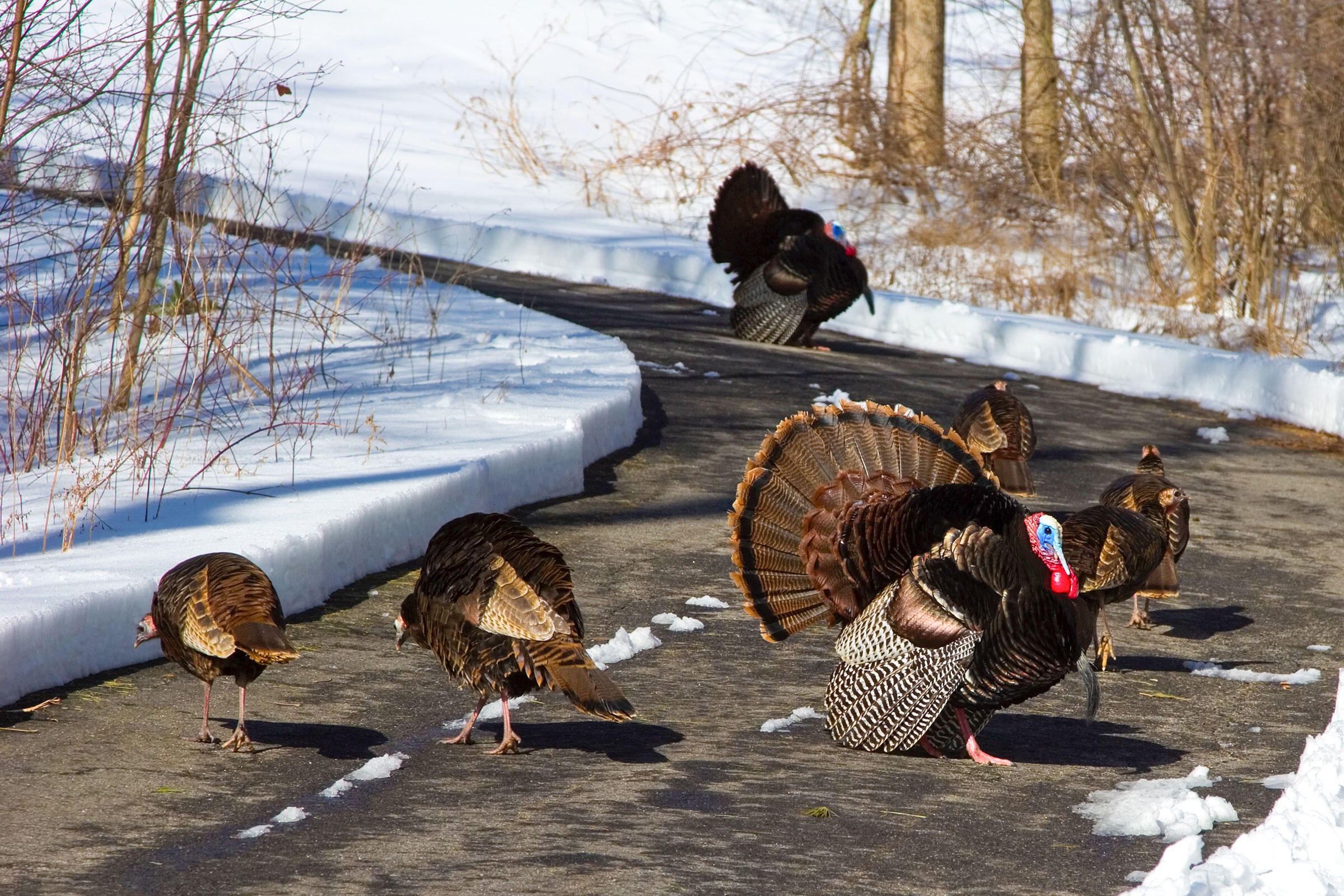 “Their population just exploded, quite literally,” Bernier says. Today, the Wild Turkey population in Massachusetts exceeds 25,000 birds. There are 45,000 Wild Turkeys in Vermont, 40,000 in New Hampshire, and almost 60,000 in Maine—almost all of which descended from those few dozen relocated birds, Bernier says. They now cover more terrain than they did before they disappeared; some Wild Turkeys even filled in pockets of previously uninhabited land on their own, something that researchers didn’t expect. “They did better than anybody thought that they would,” says Matthew DiBona, wildlife biologist with the National Wild Turkey Federation. The U.S. population is back up to roughly 6.2 million birds, he says.

In the mid-2000s, however, the turkeys started colliding with humans. New England is one of the most densely populated regions in the United States, and as people began putting out birdfeeders and growing gardens, turkeys found ample food. And the Wild Turkeys in suburbia, unlike skittish rural-roaming turkeys, quickly grew accustomed to humans. “No one had any idea that these birds would be showing up in suburbs,” says Marion Larson, the chief of information and education at MassWildlife. “There was no precedent for it.”

Overall, locals don’t mind the company. Some eager residents even go out of their way to attract the birds by scattering nuts, seeds, and berries on background platforms or intentionally growing nut-producing trees. But that warm welcome sometimes fades as the turkey-human scuffles continue to mount, and residents claim that the birds are a nuisance.

Encounters with the four-foot-tall turkeys can be dangerous, especially to a household pet or a small child. The birds can act aggressively towards humans by charging at them, pecking at them, or otherwise intimidating them. They also attack reflective surfaces that they mistake for other turkeys. That’s because the birds, usually male, are trying—and succeeding—to establish themselves at the top of the town’s pecking order. “This is the way they deal with socialization,” Larson says. “They’re treating people as if they’re turkeys.”

Outside of cities, Wild Turkey populations, such as in some southeastern and midwestern states, are on the decline as other forests are converted to farmland. But the urban birds continue to flourish in New England. Now wildlife agencies across the region are tasked with managing both the Wild Turkeys and their human neighbors to make sure encounters don’t go awry. The answer, biologists say, is simple: “We just need to stop feeding them,” Scarpitti says.

That’s what he tells local residents when he’s called to mediate neighborly disputes: Don’t feed the birds, and don’t show fear. But people hardly ever listen, and so for the foreseeable future, Wild Turkeys will continue to rule the neighborhoods of New England.