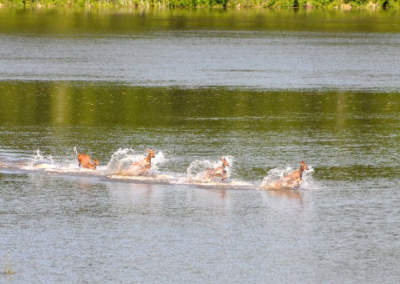 Deer flee the rising water from the Morganza Floodway in the Atchafalaya Basin. Photo: Louisiana Department of Wildlife and Fisheries

The Mississippi River continues to swell, and towns in the flood’s path area are being evacuated as water levels rise and Morganza Spillway gates release millions of gallons of water. As the water spreads into the Atchafalaya Basin in south-central Louisiana, reports of wildlife on the run are pouring in.

“In the Mississippi alluvial valley flooding may displace a lot of different wildlife, from warblers to black bears,” says Melanie Driscoll, Audubon’s Director of Bird Conservation for the Gulf of Mexico and Mississippi Flyway.

“As birds start to lose habitat hopefully they will move out from flooded areas,” Driscoll says. “Other animals can get stranded more easily. A couple of years ago when the Yazoo River flooded a lot of the area that’s under water now, we saw alligators and cows, bobcats and deer, on levees within a short driving distance of each other. It was the only dry ground, so everything just moved onto the nearest levee. “

Many deer and at least four black bears have been spotted on the move since this weekend, when the U.S. Army Corps of Engineers began opening the Morganza Spillway, which is located about 35 miles northwest of Baton Rouge and diverts water into the Atchafalaya Basin. The Corps is employing 16 of 125 gates, and may let water out of as many as one-quarter of them overall in order to protect Baton Rouge and New Orleans from severe flooding. On May 10, the Corps opened another spillway, the Bonnet Carré, (about 30 miles northwest New Orleans), but that alone didn’t divert enough water to protect the city.

The only time the Morganza Spillway had been opened previously was when water levels rose perilously high in 1973. The Corps is releasing water at a slower rate this time around to allow wildlife time to get out of harm’s way.

Still, mortalities are likely, says Paul Davidson, executive director of the Black Bear Conservation Coalition in Louisiana. “The young of the year for wild turkeys will be wiped out, and many newborn bear cubs will probably die,” he says. The Louisiana black bear, a threatened subspecies of the American black bear, nearly died out in the 1950s due largely to habitat loss. Deer, which haven’t had their fawns yet, will move outside the levee system for the next several months, he predicts. While drowning is an immediate concern for wildlife, starvation is another threat. “Summer plant foods normally available for bears, deer, and other species will be wiped out, requiring those animals to seek food elsewhere in the coming months” such as nearby agricultural crops, says Davidson. That, in turn, could lead to an increase in human/bear conflicts in populated areas.

Meanwhile, birds that rely on ground vegetation, shrubs, or low trees—such as Swainson’s warblers, hooded warblers, and Kentucky warblers—will lose habitat in flooded areas. “For the more southern-breeding species, they may start to lose habitat and lose an opportunity to breed,” says Driscoll.

There may be some positive conservation outcomes, too. The flooding could take a heavy toll on feral hogs, which cause a lot of environmental destruction, says Davidson. It might also wash out aquatic invasive species like giant salvinia and water hyacinth. 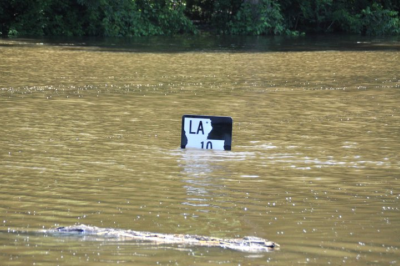 A road sign shows the high water mark in the Morganza Floodway. Photo: Louisiana Department of Wildlife and Fisheries

The inundated floodplain may benefit many fish species that depend on such areas for spawning habitat and food. Unfortunately, says Davidson, it might also allow the highly productive and invasive carp, which have taken hold in the northern reaches of the Mississippi, to move in.

Though some birds will take a hit in the coming months, Driscoll points out that flooding can also be beneficial to birds. “Floods are what have built the habitat historically, and they renew, create, and destroy habitat all at the same time,” she says. For instance, water gushing down the Mississippi River will scour sandbars, scraping them clean of vegetation. “This makes them better places to nest for birds of conservation concern, like the interior least tern and piping plovers,” says Driscoll.

Shrub-nesting species will lose habitat initially, but flooding deposits nutrient-rich sediment that spurs vegetation growth, creating suitable habitat within a couple of years. The influx of sediment can also create new sandbars. “A new sand bar is a place that hasn’t been discovered by predators, and then again maybe for a year or a couple of years, a safer place to nest, until predators find it.”

This sort of land-building process has been largely restricted by flood control measures such as levees. “Historically the river spread out over millions and millions of acres in a big flood year like this,” says David Ringer, communications coordinator for Audubon’s Mississippi River and Gulf of Mexico programs. “But we have constricted the floodplain to about 10 percent of what it was historically by putting levees down the lower Mississippi River.” 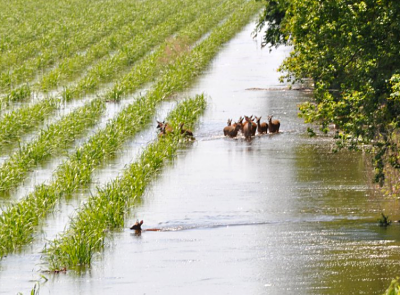 Deer make their way through water that released from the Morganza Floodway. Photo: Louisiana Department of Wildlife and Fisheries

Flood control systems protect communities, and allowed for the swamp forests of northern Mississippi and Louisiana to be cleared for cropland. Yet constricting the floodplain has had negative consequences for wildlife. “Swallow-tailed kites used to range much farther up the river,” says Driscoll. “They’re very restricted to the southern forests now. It’s led to many of the population declines. There’s simply not enough housing.” In the delta, flood control has cut off that land-building process, says Driscoll. “Habitats are getting more stagnant and less productive and they tend to be sinking and degrading in quality.”

To take pressure off the flood control system and help build new habitat, Driscoll advocates building more spillways and diversions that would increase the floodplain. “If you had more and more possibilities to connect the river to habitat at specific desired locations, you could more safely manage the river in flood years to protect human communities,” she says. “We’d be better to build those structures ahead of time, and give us control through deliberately letting down the level of the river upstream.”

That would likely mean inundating more cropland in heavy flood years. Currently, about three million acres of farmland are under water, destroying crops of corn, wheat, rice, and cotton across the South and lower Midwest. “The upside is that this water will deposit all sorts of sediments and nutrients that will increase the productivity of the Basin for the next several years,” says Davidson.

As for wildlife, he adds, “Mother Nature's critters tend to be very resilient, so much will remain to be seen as this scenario unfolds over the coming weeks.”