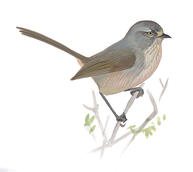 Standing off California’s busy Highway 101, scientists, lawmakers, and advocates celebrated the groundbreaking of a large overpass next to the Santa Monica Mountains last month. But the painstakingly designed $87 million corridor is not for them, or any other people, to cross the 10-lane highway and adjacent road. When completed, the Wallis Annenberg Wildlife Crossing will allow mountain lions, bobcats, lizards and—as counterintuitive as it may seem—even birds to pass from these mountains into the Simi Hills ecosystem and beyond.

Wrentits, which are songbirds native to California, are not especially strong flyers. With short wingspans and long tails, they somewhat resemble very small chickens. They spend days hidden deep within the dense maze of coastal sage scrub and chaparral, often only making themselves known with an accelerating trill-like song.

The highway runs parallel to the mountains, and today sees over 300,000 vehicles a day. Its construction decades ago made it extremely difficult for this Wrentit population to move from the Santa Monica Mountains into habitats farther north, fragmenting what was once a continuous ecosystem.

“I think people perhaps incorrectly think, ‘Oh, well, how could a highway affect birds because birds can just fly across the highway?’” says Ryan Harrigan, an associate adjunct professor at UCLA’s Institute of the Environment and Sustainability. “But that’s not really the case, particularly in the case of the Wrentit.”

In 2017, Harrigan was a co-author of a study that found different genetic makeups in Wrentits on the north side of the highway compared to those on the south side. The findings indicated that the two Wrentit populations were virtually cut off from one another. If left this way, their genetic differences would likely magnify over time.

To an extent, this kind of variety is good for a species. If all Wrentits are too genetically similar, Harrigan says, they run the risk of being wiped out if simultaneously faced with a major threat, such as a disease or climate change, that they struggle to overcome. With genetically different populations, the odds are better that at least one might have what it takes to overcome the challenge.

But if a population becomes too fractured, and too isolated, it may have difficulties persisting and reproducing, explains Harrigan. “At some point, you get to such a small population number that you can’t find mates, so the reproduction numbers are down, or predation or a disease event shrinks the numbers even further, and you really can’t get out of it. There’s no way to rebound,” he says.

It’s unclear whether that level of fracturing is affecting the region’s Wrentits. But for the mountain lion population in the Santa Monica Mountains, whose movement has also been limited by the highway, biologists have documented kinked tails and poor sperm quality that they say is a result of low genetic diversity.

There are also weather-related threats. With the climate continuing to warm, the Wrentit’s habitat in this area could change, becoming drier and more at risk of fires. Harrigan explained that these birds may need to move to cooler, more hospitable environments farther north. But with the highway blocking their way, that would be difficult.

The new wildlife crossing, in Los Angeles County, will bisect the highway and could dramatically improve habitat connectivity for many species. At 210 feet long and 174 feet wide, it’s expected to be the world’s largest. It’s the culmination of at least seven years of work by a handful of state and federal agencies and non-governmental organizations.

The nation may soon see a growing number of similar projects, adding to the rougly 1,000 wildlife corridors already in the United States. Last month, the Biden administration launched a $1 billion “America the Beautiful” Challenge, which will fund locally led conservation and restoration projects across the country—including wildlife corridors. Even without this money, states have been building more of this kind of infrastructure. On Idaho’s State Highway 21, officials are working to add a wildlife overpass for deer, elk, and antelope, for example. Colorado lawmakers recently approved funding for wildlife crossings across the state.

When the overpass for California’s Highway 101 is finished in 2025, National Park Service wildlife ecologist Katy Delaney expects the Wrentit population will use it, as long as it has the vegetation the birds need. “Wrentits are really reliant on their habitat,” she says. “If you find habitat—the correct kind of habitat that Wrentits like—you’ll find Wrentits.”

The area’s Wrentits, then, are in luck. Coastal sage scrub and chaparral will be the project’s core plants, according to Robert Rock, principal and chief operations officer for Living Habitats, which is leading the design for the crossing. Delaney will soon help monitor wildlife in the area where the corridor will be built. To see which species use the bridge, she plans to count wildlife, including Wrentits, as the corridor is constructed and vegetated and upon its completion.

For Wrentits, the crossing will likely increase the amount of easily accessible habitat. And even other birds that currently do fly over the highway could more safely and easily cross it by walking or flying over the new corridor. In doing so, Delaney says, they would avoid large trucks or other obstacles.

Additional crossings, Delaney notes, may benefit all kinds of birds that face challenges adapting to urbanization and ongoing climate change in the region, such as California Towhee, Spotted Towhee, and California Quail. “We don’t know what's going to happen as far as rain in our specific area,” she says. “There may be birds that really need to escape the heat and go certain places. And so anything that eases the mobility of these animals is going to help.”