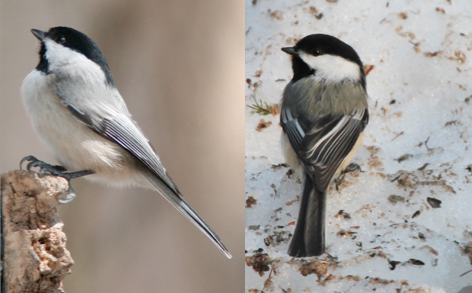 Can you tell these chickadees apart? Scroll down to find out which is which. (Photos by Henry McLin/Flickr Creative Commons (left); Kenn and Kimberly Kaufman (right))

To study bird identification, we don’t necessarily have to go far afield. Here’s an ID challenge that shows up at backyard bird feeders in the eastern U.S.: Black-capped Chickadee vs. Carolina Chickadee. These two are distinct species, without a doubt, but they are surprisingly similar in appearance and voice.  Here’s a brief overview of some points to consider in chickadee ID.

The simplest way to start is to glance at a map. Carolina Chickadee lives all over the southeastern U.S., as far west as Oklahoma. Black-capped Chickadee is found all across the northern U.S. and much of Canada. They meet in a very narrow zone from New Jersey west to Kansas.

The boundary between the two has been shifting northward very slowly for many decades; the map here shows the approximate current limits. Carolina Chickadees seldom wander north of the line, but a few Black-cappeds show up south of it during winter “invasions.” Where the two species meet, they often interbreed, producing a hybrid zone. Within this narrow zone (usually no more than about 20 miles wide), many of the birds are intermediate, and can’t be identified.

The range of the Black-capped extends southward in the Appalachians, and there are places where Carolinas live in the lowlands and Black-cappeds live at upper elevations, probably with hybrids in between.

The dashed blue line indicates roughly where Black-capped and Carolina chickadees meet, overlap, and hybridize along a narrow zone.

The typical songs differ. Black-capped whistles See-beee or See-bee-ee, the first note higher, the second part sounding either one- or two-syllabled. Carolina’s usual song is a four-syllabled See-bee-see-bay, with the first and third syllables sounding very high-pitched. This is no help for separating them where their ranges meet, however, because each can learn the song of the other. Near the hybrid zone, many chickadees sing both song types.

Both species make a wide variety of call notes, and most of those calls are of no help in telling the species apart. However, the rapid Chick-a-dee-dee-dee-dee call tends to be faster and higher-pitched when the Carolina Chickadee is doing it, and with practice you can hear the difference.

Visible differences between the two are more obvious at some seasons than others. Chickadees go through the annual molt (replacement) of their feathers from midsummer to early fall, so they are in fresh, clean plumage during fall and winter. By late spring and early summer, their feathers are becoming more worn and faded, so differences between the species are less apparent then.

Wing pattern
When they’re in fresh plumage, Black-capped shows more contrast in the wings, with white edgings on several feather groups including the greater coverts and secondaries. Carolina Chickadee also has white edgings on the secondaries, but they show less contrast, and its wings look plainer and grayer overall. However, bright sunlight reflecting off the wings can make gray feather edges look white from some angles, so you may have to watch the bird for a minute to judge this accurately.

Both species have white cheeks setting off their black cap and black bib. On Black-capped, the white area looks clean and bright all the way to edge of the upper back. On Carolina, the white fades gradually into gray as it goes back toward the nape. This is only apparent if you have an excellent view in good light.

On Carolina Chickadee, the division between the black throat and the white chest creates a relatively even, straight line. On Black-capped, the line tends to be more uneven, giving the bib a blobby, messy lower edge. The appearance of this can seem to change from moment to moment as the bird moves around and the feathers are rearranged, but it can be a useful minor point to look for.

When the birds are in fresh plumage in fall and winter, Black-capped tends to look more colorful overall, with more buff on the flanks below the wings and more of an olive tinge to the back. Carolina tends to look grayer overall at this season. By late spring, after months of wear and fading on the feathers, they all look fairly dull and gray.

On average, Black-capped Chickadee is larger and longer-tailed than Carolina Chickadee. However, chickadees in general vary in size from north to south, with the largest Black-cappeds in the northern stretches of their range and the smallest Carolinas in the deep south. Where their ranges meet, the difference is minor and hard to see even with a direct comparison.

In most places, it’s easy to separate these two chickadees by looking at the map. Where their ranges meet, it may be impossible to identify most individuals, because of the possibility of hybrids. But they are still worthy of close study, wherever we may see them. If we take time to look and listen for these subtle differences, they can help us to build up our powers of observation. Besides, chickadees are delightful birds: spunky, energetic, full of personality, and always worth watching.

Black-capped chickadee. To separate it from Carolina chickadee, we might notice the strong contrast in the wings and the very large white cheek patch. However, a more sure-fire field mark is the fact that it's sitting in the snow in northern Michigan, far from the range of its Carolina cousin. (Photo by Kenn and Kimberly Kaufman) 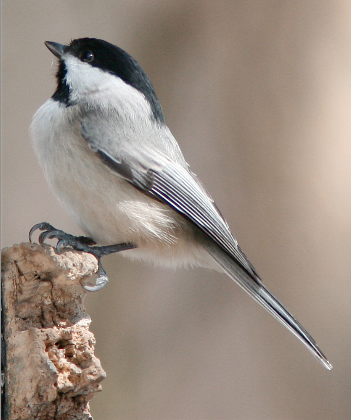