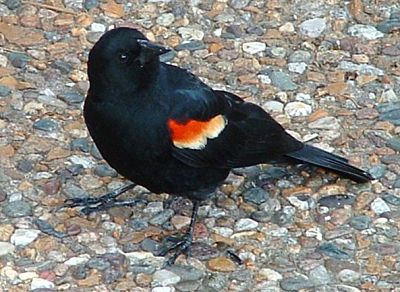 Professional-grade fireworks probably caused the deaths of thousands of red-winged blackbirds in Beebe, Arkansas, on New Year’s Eve. The loud noises, combined with birds’ poor night vision and large winter gathering, likely led 4,000 to 5,000 birds to crash to their deaths.

Here’s what officials have pieced together:

At 10 p.m., residents heard several extremely loud, “window-shaking” noises that are believed to have come from professional-grade fireworks, which no one had permission to set off. The blasts came from an area near the birds’ winter roost.

About 15 minutes later several folks went outside when they heard the whooshing wings of a blackbird flock flying at its normal fast speed. “But when they looked up, instead of the birds being above treetop level, like they usually are, they were at rooftop level,” says Rowe. “They crashed into houses, cars, trees, mailboxes, shrubbery. Everything around.”

Blackbirds don’t usually fly at night. The big booms apparently flushed the birds from their roost, and then poor eyesight and disorientation stymied them from making it back safely.

“Necropsy report shows trauma primarily to the chest,” says Rowe. “Hemorrhaging in the body cavity, bruised skulls, blood clots in brain. It’s consistent with crashing into something rather than falling.”

Toxins don’t appear to be a factor, says Rowe, adding that the death toll is difficult to estimate because feral cats, raccoons, and other scavengers likely made a meal out of the fallen creatures.

The loss of any animals is regrettable, says Rowe. “I don’t want to see it again, but I especially hope we don’t see it with any declining species like cerulean warblers.”

Beebe residents aren’t likely to see a repeat of the freak event on the Fourth of July, the only other day the city allows fireworks. Blackbirds will be spread out on their individual nests then, instead of congregating in their winter roost.

It appears that similarly mysterious bird deaths in Louisiana around the same time are unrelated. “Initial findings indicate that these are isolated incidents that were probably caused by disturbance and disorientation,” says Greg Butcher, Audubon’s director of bird conservation.

The birds—red-winged blackbirds, common grackles, brown-headed cowbirds and European starlings—are abundant species that flock together in large nighttime roosts during the winter months. Roosts can contain from tens of thousands to 20 million individuals or more.

Blackbirds are so prolific that during the Christmas Bird Count this year, Rowe says she and another biologist commented that they spent so much time counting blackbirds that they didn’t get to search out more rare species. “This will teach us,” she says wryly.