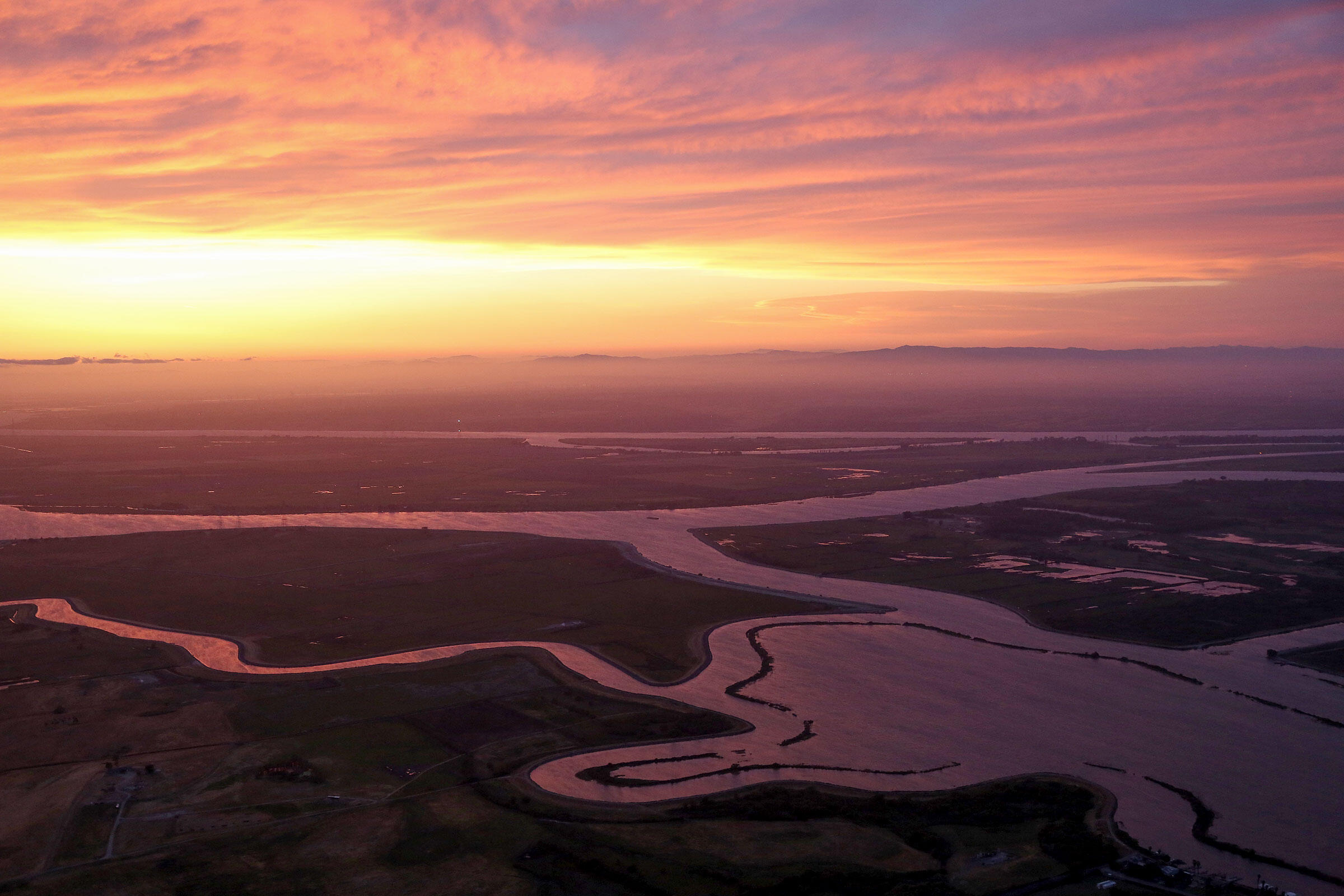 To mitigate water diversion projects, state agencies pledge to restore wetlands that birds and fish use. But these projects can take so long to come to fruition that they are sometimes 'double counted.'

Every few winters during heavy rainstorms, the Sacramento River overflows its banks and floods a remote sprawl of rice fields and grassy scrub called the Yolo Bypass. These events benefit juvenile salmon by creating a temporary area of refuge and abundant food, especially of small invertebrates that proliferate in the shallow floodwaters. Before dams and levees tamed the river early last century, such floods were an annual occurrence in California’s Central Valley, where Chinook salmon and waterfowl historically teemed but have since dwindled in numbers.

To help revive ailing fish populations, environmentalists want to see the levee system that separates the Yolo Bypass from the river modified with a large notch so that the area—some 17,000 acres —will once again flood every year. “Allowing the Yolo Bypass to function more often as the natural floodplain that it is will help increase the number of salmon in California,” says John McManus, president of the Golden State Salmon Association, an environmental and fishery advocacy group.

In fact, state agencies are required by law to restore the Yolo Bypass floodplains. The project was formally mandated in 2009 as a way to mitigate the environmental impacts of pumping large volumes of water from the Central Valley’s rivers. Eleven years later, though, the project has yet to break ground. And it’s not the only one. In California, there is a wealth of habitat restoration work that various laws and agreements recommend or require to mitigate water diversion projects but which are many years overdue.  “They just aren’t doing it,” says Osha Meserve, an environmental attorney in Sacramento. “They’ve been operating their water projects the whole time, but they haven’t done the mitigation.”

Meserve has represented nonprofit organizations on cases related to Central Valley environmental issues for a decade. She says the agencies in charge of managing the state’s water, habitat, and endangered species, as well as development projects, sometimes play a “shell game” by which they promise to restore degraded habitat to mitigate the impacts of intensive water use, neglect to do the environmental work, and then later reintroduce the same habitat improvement proposals as bargaining chips for new actions, like increases in water diversions.

Referred to by environmentalists as “double-counting,” this shortchanges fish and wildlife populations because it leads to less work to restore habitat overall, replacing new projects that might otherwise be required. “It allows those who are diverting water from the rivers at the expense of wildlife to get off with half the mitigation work they’re required to do,” McManus says.

Water, and how it’s used, has become one of California’s most controversial policy issues, especially as climate change and worsening drought patterns threaten existing supplies. Huge pumps draw water from rivers like the Sacramento and San Joaquin and send it via canals to farms and cities. This pumping, according to many scientists, has exceeded the limits of what is ecologically sustainable, contributing to crashing fish populations in the Sacramento-San Joaquin Delta. Some species, like Delta smelt, are almost extinct, while environmental and fishery groups maintain hope that salmon runs may rebound.

The health of bird populations are at stake in these projects, too. In the state’s large river valleys and estuaries, salmon, waterfowl, songbirds and various wading birds share the same habitat. “They evolved together, so habitat improvements that benefit one should benefit the other,” says Meghan Hertel, the director of land and water conservation for Audubon California.

These ecosystems need adequate water flows as well as intact habitat, each of which mitigation work theoretically guarantees. However, the delays in the projects, plus the issue of double-counting, shorthchanges them both. This is happening in the Sacramento River system, where various laws and policies calling for rebuilding habitat have failed to make a great splash. In the early 2000s, a habitat rebuilding program called the Central Valley Joint Venture outlined the Yolo Bypass restoration as a potential boon for waterfowl and songbirds.

In 2009, the U.S. National Marine Fisheries Service made restoring the Yolo Bypass floodplains a legal requirement to help mitigate for routine water pumping from the Delta, which agency scientists concluded was contributing to waning salmon populations. The pumping continued, but the habitat work remained little more than a desktop idea.

Then, in 2013, former-Gov. Jerry Brown’s administration proposed the Yolo Bypass project, plus a great deal more acreage, in an entirely different project—a pair of giant underground tunnels that, had they been constructed, would have funneled huge volumes of water from the lower Sacramento River. (The double tunnels are now being reconsidered as a single tube.) Two years later, the Yolo Bypass was reintroduced yet again in a plan named EcoRestore that called for creating 38,000 acres of riverside habitat. EcoRestore’s goal, according to the website of the California Department of Water Resources, the agency leading the project, is “to advance 30,000 acres of critical habitat restoration and enhancement.” “EcoRestore was just a rebranding of work they were already required to do,” Meserve says.

To date, EcoRestore has produced 4,700 acres of finished floodplain and side channels, with another 4,700 acres underway, according to Allen Young, a public information officer with the California Department of Water Resources. The bulk of the Yolo Bypass work is now slated to begin late next year.

Other Central Valley habitat restoration projects have been double-counted.

Other Central Valley habitat restoration projects have been double-counted. Doug Obegi, a water law attorney with the Natural Resources Defense Council, compiled a listing of them in December 2018, describing dozens of newly proposed salmon habitat improvement actions which already existed from past, undone commitments, including gravel bed augmentation programs to create spawning habitat; riverside habitat enhancement for the benefit of juvenile salmon; and many other adjustments to channels, levees and flow patterns that could produce positive results in fish and waterfowl numbers. The levee notch job necessary to flood the Yolo Bypass was on the list, too.

Obegi explained in a 2019 blog post that the proposed actions “were largely double-counting habitat restoration projects that are either already required or planned using public funds.”  Some of the projects he flagged stem all the way back to the Central Valley Project Improvement Act, a federal law passed in 1992 which established an optimistic, and probably impossible, mandate to restore Chinook salmon at least to historic levels. Obegi sayshe is still concerned about the issue of double-counting and that his organization hasn’t forgotten the promised habitat projects. “But our primary interest has been and remains ensuring adequate stream flows, because habitat restoration is important but it’s not a substitute for having adequate flows,” he says.

Kris Tjernell, the deputy director of the California Department of Water Resources’ Integrated Watershed Management Program, says the notion of double-counting is an inaccurate portrayal of his department’s work to move projects forward. He says the reappearance of various habitat fixes in successive proposals is better interpreted as a way of underscoring their importance. As for the slow pace at which projects are undertaken, Tjernell says this is hard to avoid when working with privately-owned parcels. The especially big projects, he notes, can involve numerous landowners, all of whom must agree on a course of action. “On the Yolo Bypass project, there are more than 100 landowners,” he says. “This makes just communicating very difficult.”

Hertel, at Audubon California, also emphasizes the logistically cumbersome and time-consuming nature of habitat restoration work. For one thing, it’s very expensive, she says. Also, a project may involve numerous agencies which must all issue their own permits for any actions that will affect threatened or endangered species. Sometimes these permits conflict with one another, creating bureaucratic roadblocks that stall projects for months or years. Completing them requires both strong political commitment and sustained funding.

In the Central Valley, just five percent of historic wetland acreage remains intact. The EcoRestore projects, once finished, will double this figure to 10 percent, according to Tjernell. About half of that potential gain lies in the Yolo Bypass project, which will begin in the fall of 2021. The work will involve some preliminary tree removal and clearing of vegetation and, eventually, what Tjernell’s office refers to as the “Big Notch”—the levee cutout that will allow the bypass area to flood routinely, at least between November and March, when the gates will be left open. The whole operation will cost $130 million and is penciled in for completion before the end of 2022.

This could be a significant, if long overdue help to salmon populations, birds, and other wildlife, McManus says, and he just wants to see it finished. Winter-run Chinook have nearly vanished in the past decade, in large part because very few juveniles trying to reach the ocean survive their migration. Improved habitat would ease the rigors of their journey and boost their chances of reaching saltwater. “If they do this,” says McManus, “I’d be willing to just look to the future because it will be a better one for salmon.”