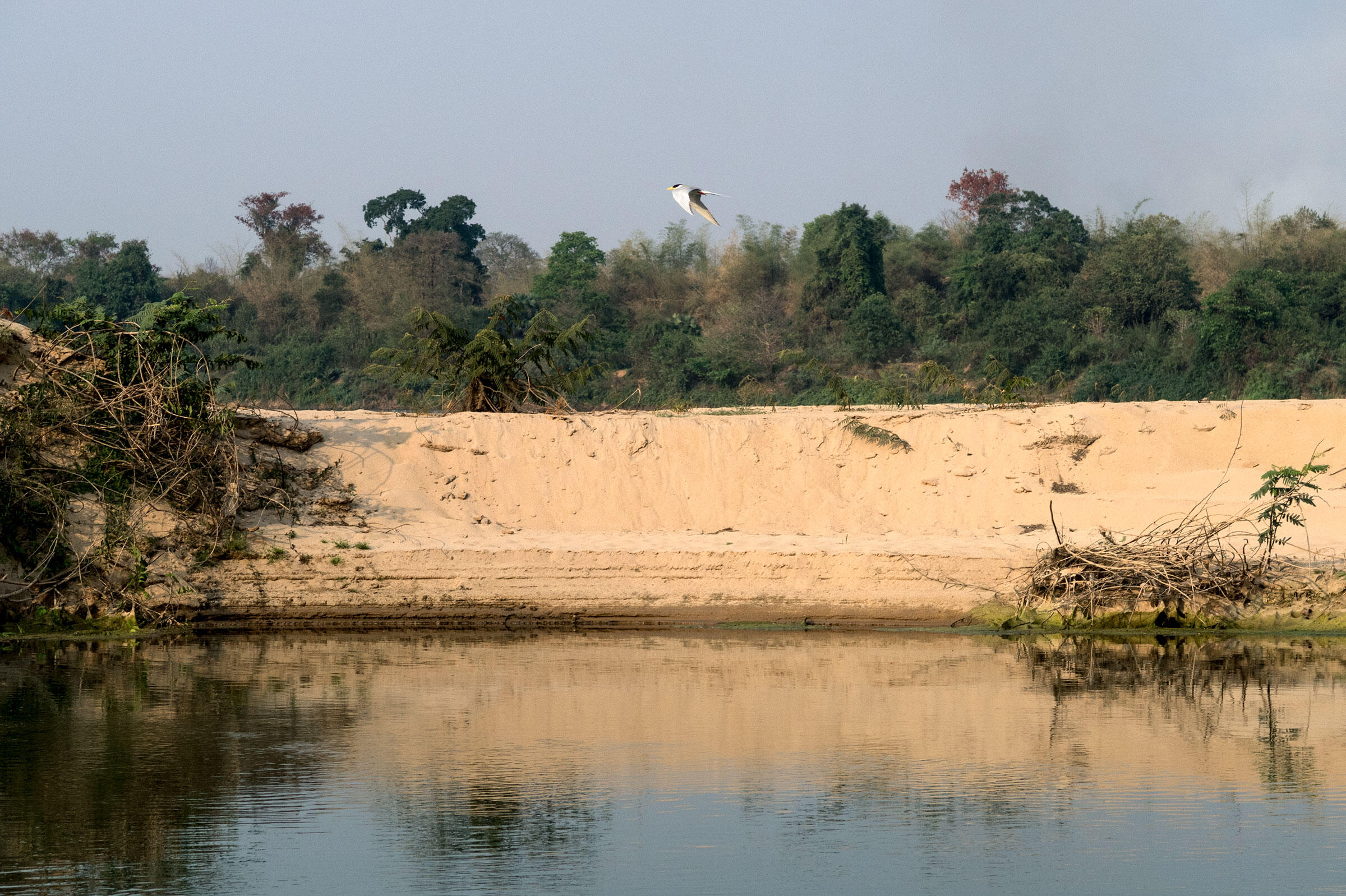 A River Tern flies past a sandbar in the Mekong River, where currently, 75 percent of the species' Cambodian population nests. One year ago, the country installed a 250-foot-high hydropower dam just a few miles upstream. The construction has had expansive changes on the landscape and local biota, scientists say. Photo: Abby Seiff

It’s an early morning in March and the birds are gathering on a slip of sandbar in the middle of Cambodia’s Mekong River. Their timing is perfect: A few months later and the islet of Koh Lakrou will begin to vanish as the waters swell from relentless monsoon rains. Months earlier and the banks might be too drenched or crowded with vegetation to attract potential nesters. But right now, at the height of dry season, this stretch of the Mekong is teeming. Small pratincoles and River Lapwings spin dizzying circles; a Brahminy Kite lets loose a haunting cry; and a file of River Terns dives at the water’s surface.

Twenty yards away, conservation biologist Andrea Claassen is crouching behind a patch of sand grass, a tin cup of muesli and soy milk parked at her feet. She passes me her binoculars and points out the technicolor plumage of the Blue-tailed Bee-eaters, suggesting I also keep a look out for the “cartoonish” Great Thick-knee. The River Terns, with Zorro-like slashes across their snowy-white heads, are still diving at the water with zest, their wings shaped into razor-edge Ws.

Just a few decades ago, River Terns were as common on the central Mekong as pigeons are in New York City. But with human populations expanding along Southeast Asia’s rivers, the birds have correspondingly dropped in number, falling prey to egg collectors and habitat destruction. Hydropower dams have exacerbated the situation, flooding regular breeding sites and lowering the species’ fish supplies. Today, there are about 30 pairs left in Cambodia—with 75 percent of them clustered around Koh Lakrou.

Tiny as it is, the stronghold offers a glimmer of hope for Claassen, a recent doctorate researcher at the University of Minnesota who’s been studying nesting birds on the Mekong since 2003, and the network of local tern protectors she’s helped assemble over time. Together, they’ve kept the species from going extinct in Central Cambodia, even as it vanishes from neighboring Laos, Thailand, and Vietnam. The River Tern is now listed as near threatened on the IUCN Red List (partly through Claassen’s advocacy) with a foreboding asterisk: “The species is expected to be virtually extinct from the lower Mekong basin in just five years if no specific conservation action is immediately carried out,” the IUCN website states.

But after years of downturns, Claassen says the number of Cambodian River Terns is finally stabilizing. “The population trend [since 2016] is kind of like a ski jump,” she says, grinning. “It’s just really exciting and rewarding after seeing declines over the last 15 years.”

he River Tern has never been a particularly easy bird to preserve. It lays its small, speckled eggs in delicate pairs and trios directly on top of the sand. Water buffalo lumber across them, rats seek them out, and, for the longest time, humans collected them by the basketful.

On the Koh Lakrou sandbar, however, wire fencing is neatly woven around each vulnerable nest, with a handful of sticks impaled in the sand to mark newly spotted eggs. This is the handiwork of 64-year-old nest protector Meak Phoeurn, whom Claassen met nearly a decade ago while he was farming watermelon on the edge of a River Tern nesting site.

Initially, Phoeurn had few thoughts about the birds. “That wasn’t my interest; I had no idea what bird-nest protecting was,” he says. But after Claassen gave him a tutorial and told him that the species was about to go extinct, he dove right in. “I wanted to help and conserve the endangered species for us—to make it survive for the next generation,” he explains.

Most years, Claassen bootstraps funds and comes to Cambodia from January to April—the four-month breeding period for the terns. She and her crew of translators-turned-research assistants use Phoeurn’s sandbar as their base, camping out with him and his family, catching up on issues they’ve had with the nests, and experimenting with new tactics to keep out various predators. Based on the successful partnership with Phoeurn, Claassen now employs dozens of fishers and farmers to find and monitor nesting sites. Working in pairs, the protectors set up wire meshing around eggs and make sure hatchlings stay shaded and cool. For this, they’re paid between $2 and $4 a day by the World Wildlife Fund (the more chicks that fly off safely by the end of the season, the more money they get).

The gig is certainly non-traditional, and its importance is often lost on the rest of the community, Phoeurn says. “People laugh at us when we do the nest guarding. They think, ‘you’re crazy; you’re talking to the birds; you’re laughing and playing with them,’ ” he recounts. “I can’t explain to them, but I just keep showing them what I love, what I want to do.”

Overall, village-level conservation has had great returns for the River Tern. Through education and employment programs, conservationists have managed to convince local residents to stop collecting eggs and begin carrying out their own nest-protection and even field-research activities. The “ski jump” Claassen refers to can be directly traced to those efforts. In 2011, the World Wildlife Fund (WWF) recorded 22 terns in this section of the Mekong; this year, Claassen spotted 38. (In 1998, there were as many as 139.) But funding is sporadic and hard to retain. While WWF runs the program here, they frequently plead financial constraints, leaving nest protectors in the lurch. Claassen often pays out of pocket to buy the staff more supplies or help them out with gas and phone cards. The Royal University of Phnom Penh, where Claassen works as an adviser, ran a similar network at the nearby Sekong river, but recently lost funding.

eanwhile, far more damaging forces are at play, imperiling the protectors’ hard-fought progress. Last September, Cambodia's largest hydropower dam went online, just 25 miles upriver from Koh Lakrou. The $816-million Chinese-funded Lower Sesan II is part of a string of dams being built on the Mekong and its tributaries. While Cambodia’s government insists the project is necessary to meet the needs of a rapidly developing nation, research suggests the costs will far outweigh the benefits. The Lower Sesan II alone is anticipated to see a 9 percent drop in fish stocks—a calamity for the largely pescetarian population of Cambodians and terns. The dams come with other dangers, too. In late July, a collapse in neighboring Laos sent water rushing through a village, killing dozens, displacing thousands, and destroying countless homes. Surging water levels along the Sekong River in Cambodia led to an additional 5,000 people being evacuated.

An even larger dam, planned about 30 miles downstream on the nearby Sambor River, serves as a looming threat. “If the dam in Sambor happens, the River Tern will be the first [to be] impacted,” says Sok Ko, a Cambodian Forestry Administration officer who also runs the nest-protection program for WWF. “If it’s flooded, you won’t have the sandbars the River Tern uses to make nests.” 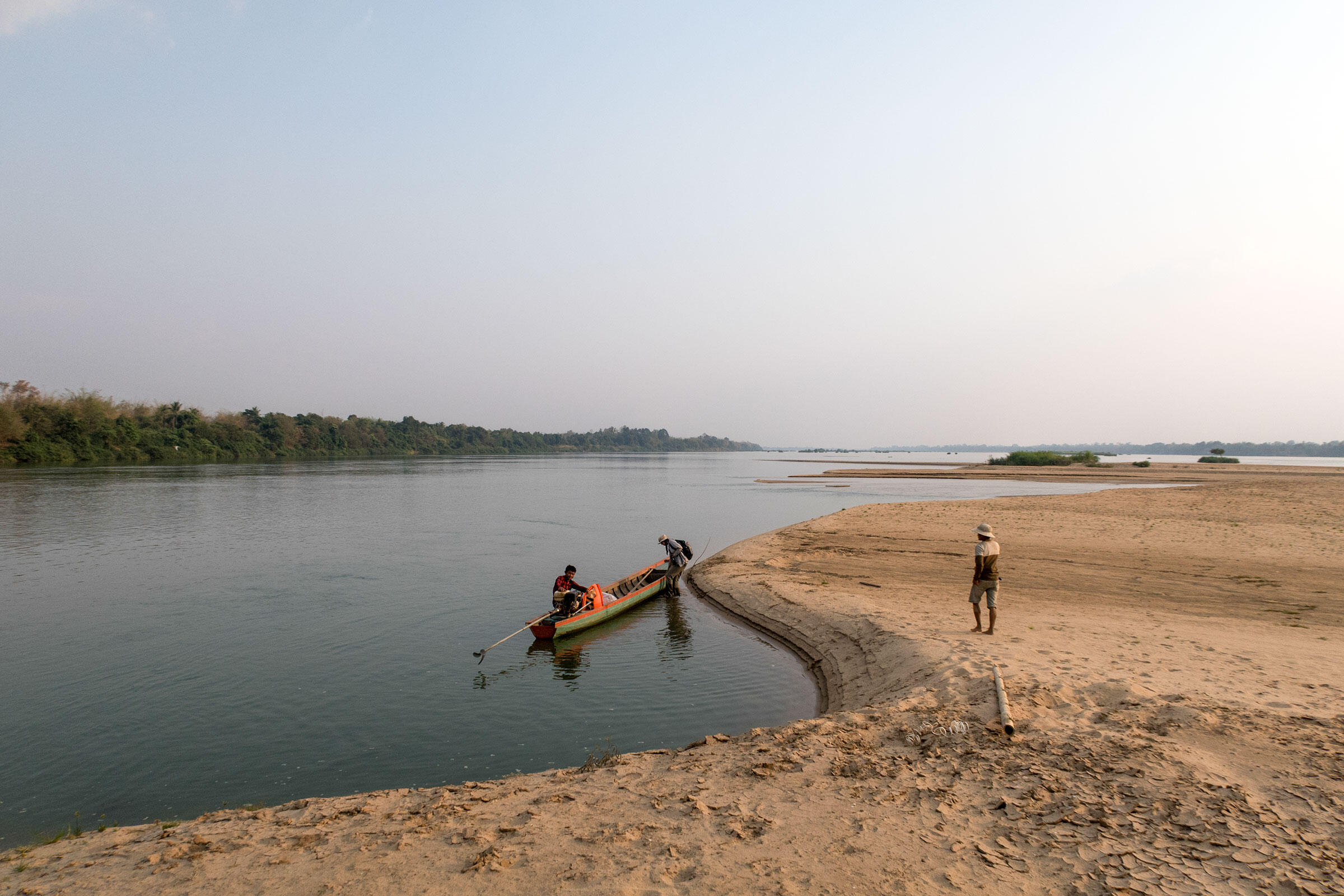 After camping all night on sandbars in the Mekong, the tern crew sets adrift to pinpoint any undiscovered nesting sites along the river. Photo: Abby Seiff

Cheam So Phat, a 37-year-old fisher, has witnessed the bird’s precipitous decline over his lifetime. He lives with his mother and sister in a small island village in the Mekong, barely a dozen miles south of the newest dam. The construction, rampant illegal fishing, and large-scale dredging for sand have reshaped their relationship with the river. Fish are harder to catch, So Phat says, and the soil quality has worsened. The birds, meanwhile, are losing entire habitats.

“Before, even if you collect and cook the eggs, the River Tern kept coming. It could have not gone extinct. Before there’s no sand dredging, no hydropower dams—I think that is the cause of extinction,” So Phat says.

While dams and dredging are beyond their control, Claassen and the protectors are pressing on with their labors. If the health of the tern population improves, the localized disasters might serve less of a blow. With that in mind, last month, Claassen distributed a 10-year species action plan outlining every threat to the River Tern. The report also includes proposed legislation for the Cambodian government and a detailed list of actions—down to the dollar amounts—for NGOs, ministries, local authorities, and academic institutions. The end goal is to grow the country’s River Tern population by at least 50 percent.

The plan, which was funded in part by a National Geographic Society grant, has been many years in the works; but it also represents somewhat of a swan song for Claassen. Now that her PhD is finished, there are limits to what she can do as an independent researcher. The sustainability of the nest protectors’ efforts, the emotional attachments, and the frustrations with the organizations have pushed her and her field assistant, Trong Kam, to start planning and fundraising for their own nonprofit.

One night, as Claassen's crew eats dinner under a red harvest moon, a teenage boy swings by on his boat. It’s Phoeurn’s grandson, collecting his elder for a doctor’s appointment in the village. Phoeurn has been sick on and off for months; Claassen presses $100 on him and urges him to go. He’s been avoiding it, his family says, because he’s worried about who will take care of the birds.

“Tell him the tern is important, but his health is more important,” Claassen says. “If he dies . . . ”

The next day, Phoeurn’s daughter talks about how difficult the situation really is. “Our dad said if Andrea stops coming, he will also stop doing this. She’s the only person so far who supports us. If she stops doing it, who’s going to support us?” With 15 years of tiny victories in the balance, it's clear that the River Tern’s fate still rests on its champions—and the ever-growing army of sentries they've levied.

Interview interpreting by Len Leng. Reporting was supported by a grant from Internews’ Earth Journalism Network.

How Plastic Birds Are Bringing Crested Terns Back From the Brink

One man, 300 decoys, and a pair of speakers on a barren island in the East China Sea may just save this critically endangered bird.

Competitive kite flying in Delhi is slicing up raptors. These siblings are patching up injured birds and pushing for safer skies.