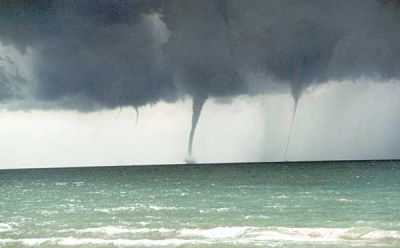 From my home in eastern Maine, I have followed with horror and dismay the travails of so many people whose lives have been torn apart by Sandy. I have never experienced the crushing sense of a personal assault delivered by “an act of God” that seems to have been so common in this disaster. But, through one long-ago encounter, I have an inkling of the impact such an event can make: the ultimate word to describe it is violence. One can never forget it.

It seems like another lifetime now, that day more than 35 years ago when the elements conspired against me. I had experienced each of those elements singly, at one time or another--violent thunderstorms, destructive winds, turbulent seas, and all of them on the water. After all, I had spent three years, most of the time at sea, in the U. S. Navy during World War II. But this was piling on.

I was on the Texas coast, on assignment for Audubon, and I was about to get my first look ever at a whooping crane. Rich Paul, an Audubon biologist and a good friend with whom I had worked before, was my guide. We set out from a state park in a small open boat, powered by an outboard motor, for the Aransas National Wildlife Refuge where the cranes spent their winters. I remember seeing a fisherman’s old gray Chevrolet sedan parked near the dock as we shoved off.

We had been gone from the dock less than ten minutes when Rich spotted an ominous cloud on the horizon. It was taking on the shape of a funnel. No doubt about it. There was a waterspout out there—the marine version of a tornado, and almost as deadly. Rich turned in a tight circle and we fled back toward shore. Satchel Paige, the baseball great, once said, “Don’t look back. Something might be gaining on you.” Well, we looked back, and what was gaining us was a waterspout.

In a matter of seconds we were in it. An enveloping black cloud, sheets of rain, the shallow water of the bay in an uproar around us. A roar like that of a runaway subway train. Out of the blackness, stabbing shafts of lightning. Rick shouted at me to lie face down in the bow. I had never experienced such insensate violence. The sea and the sky pounded us as if with a giant mallet.

What saved us was that, in the complete darkness, the lights at the state park became activated. Rich turned the boat in that direction. We hit the dock with such speed that the boat’s stem shattered.

I turned and looked at Rich. In raking the boat, the deluge of hailstorms had left pockmarks in rows across his forehead. Both of us were drenched, our shirts partly torn off by the fury of the wind.  Both of us had held so grimly to the boat that, when we relaxed the tension, we began trembling violently.

The storm was already out of sight. Touching land, it transformed itself into a tornado and tore the roof from a local school. A fisherman, who had seen us leave and then noticed the waterspout whirling in, had waited for us in his old Chevy. He helped us secure the boat, then took us to his car where we had a chance to compose ourselves.

Not all was lost. A few days later, Rich Paul drove me to Aransas in his pickup and I added the whooping crane to my life list. But a sense of the violence reached by surging water will never leave me.