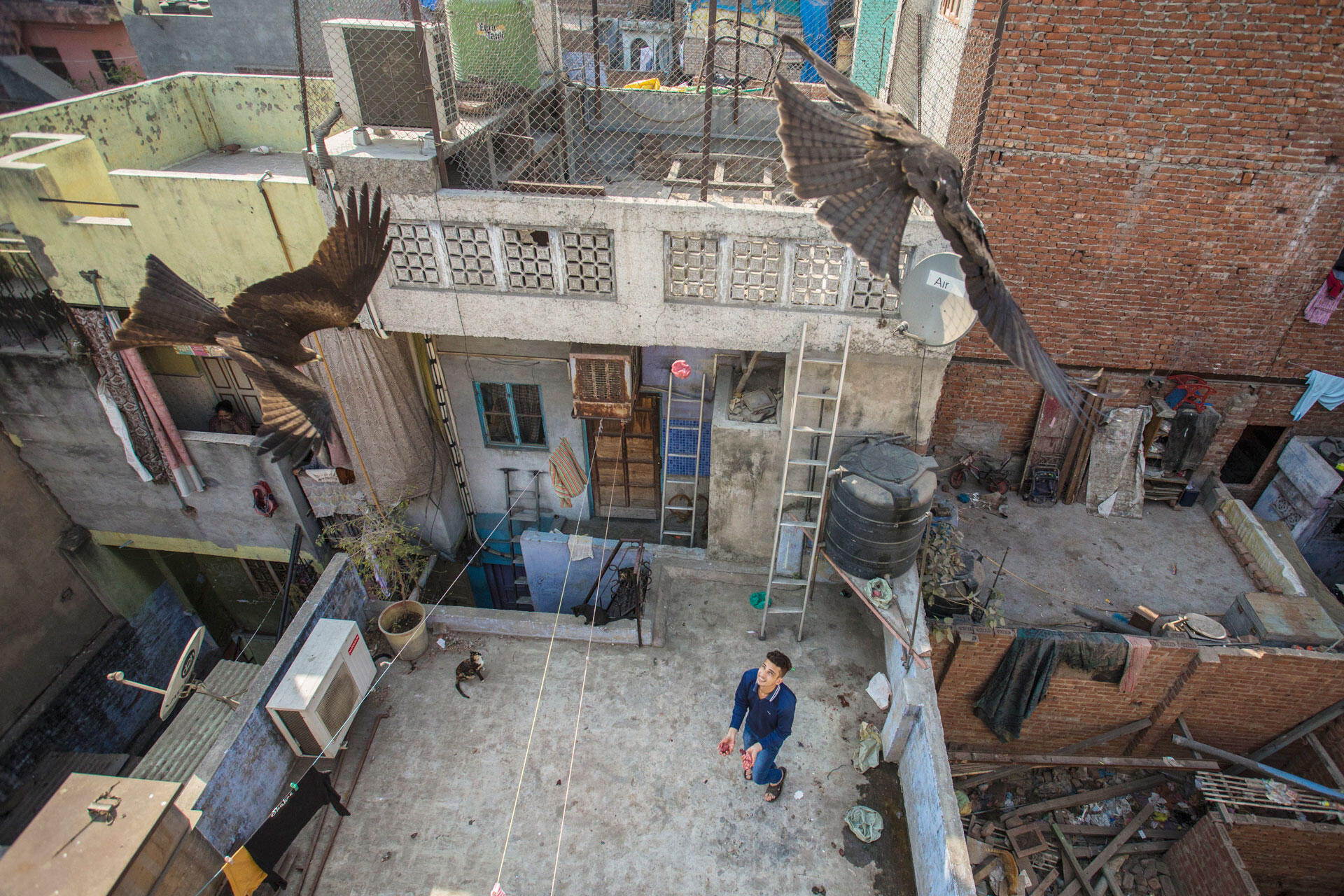 Competitive kite flying in Delhi is slicing up raptors. These siblings are patching up injured birds and pushing for safer skies.

When brothers Mohammed Saud and Nadeem Shahzad found their first injured Black Kite, they had no idea what to do with the bloody bird. Kites are abundant in Delhi, India, where the siblings live, and swirls of the gregarious scavengers often fill the skies, especially where food is plentiful. Unfortunately for the acrobatic avians, competitive kite flying—a sport that involves outmaneuvering your opponents to cut their string with your own—is popular among the city's nearly 10 million human inhabitants. When the birds hit the sharpened string necessary to do battle, it “slices through their bodies like a knife,” Saud says.

The bird the brothers came across 15 years ago had tangled with one of these paper kites and was too wounded to fly, so they took it to the Jain Bird Hospital. They were turned away. The people who ran the clinic adhered to a strict vegetarian diet for religious reasons; they couldn’t, they explained, care for the raptor because they could not feed it meat. Out of options, Saud and Shahzad regretfully put the bird back where they had picked it up.

Over the years, the brothers came across more wounded kites, most crippled by vicious cuts. Knowing of no place to take them, they left the raptors in place. Then seven years ago while crossing a parking lot the duo came across yet another bleeding Black Kite. After leaving so many of the birds to die, they could no longer stand to see the suffering creatures. They carried it home, knowing that they would be fully responsible for it. A veterinarian patched up the bird, and under Saud and Shahzad's patient care, it made a full recovery. Encouraged, they began bringing home more kites, learning from a pigeon-trainer neighbor how to clean and suture wounds. Word got out, and over time the calls they received about hurt kites went from a trickle to a torrent.

Today Saud and Shahzad are expert rehabilitators who run their clinic, Wildlife Rescue, on a Delhi rooftop. While neighbors use the outdoor space to hang laundry and lounge on patio furniture, the duo has constructed two large aviaries. When these photos were shot, their patients included 100 kites, four Egyptian Vultures, a Painted Stork, and a Fish Owl. The vast majority of their charges are kites—they see about 2,000 a year—and the brothers estimate that 70 percent are wounded by kite strings. 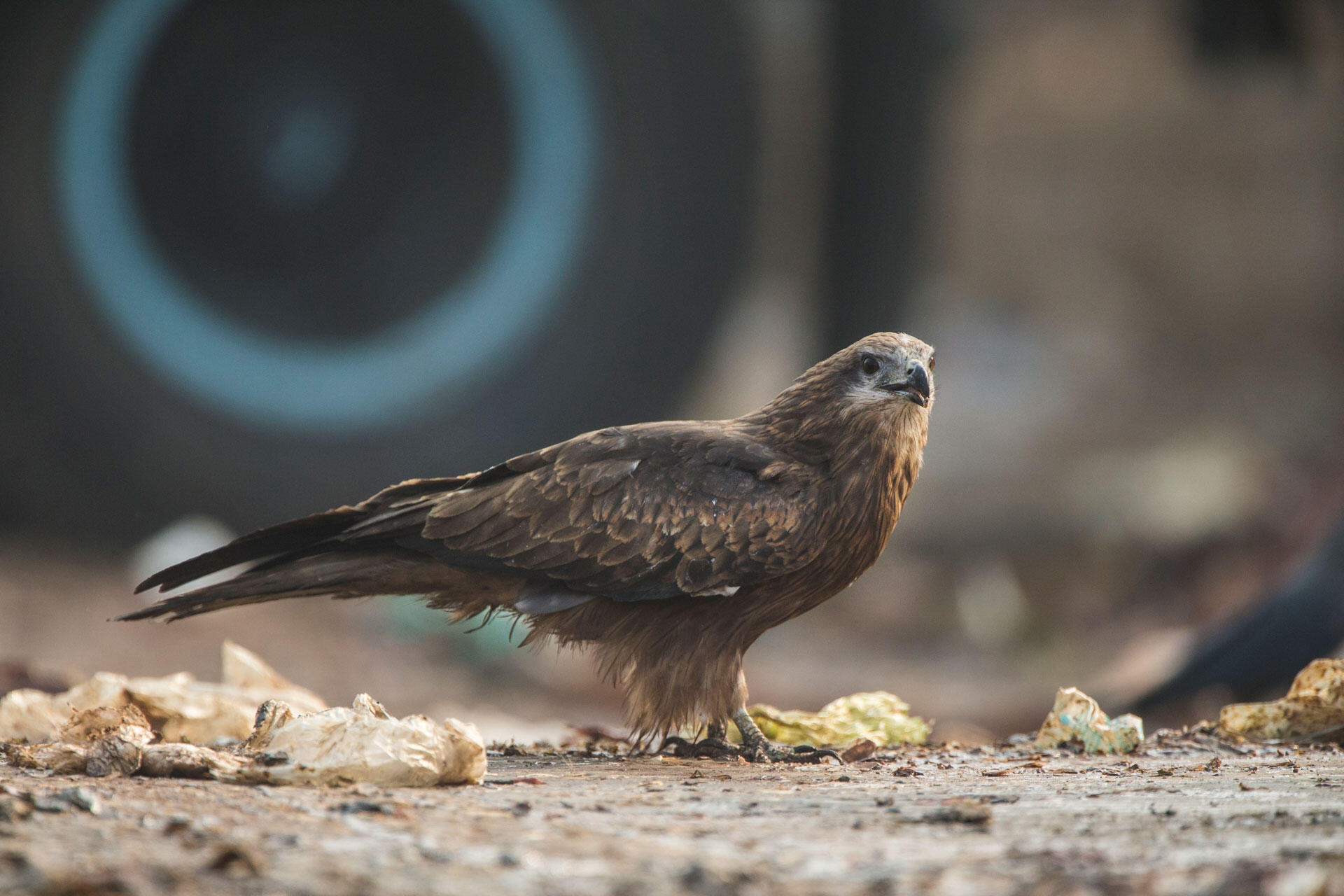 A Black Kite scavenges for scraps near a fish market. Photo: Luke Massey

Kite flying in general is a popular pastime in Delhi and elsewhere in the region, but it is the competitive flying, as depicted in the novel The Kite Runner, that is particularly harmful for the birds. Rather than using plain cotton thread for their aerial duals, participants prefer manja, thread coated in ground-up glass or metal to make it razor-sharp.

“All birds are at threat from the string of the paper kite,” Shahzad says, "but the Black Kite is the most vulnerable because it often flies low and takes circuitous routes.” Stray string in the trees where kites nest also poses a risk, as birds can become ensnared and starve to death.

Officials in India have made some strides recently to make the skies safer. Delhi banned the use of manja in August, after stray strings slit the throats of and killed three people, including two toddlers. Citing dangers to people, birds, and the environment, the National Green Tribunal put in place a temporary nationwide ban on manja in December; the tribunal will discuss lifting the ban at its next hearing, on February 1. Even if the ban continues, questions remain about authorities’ ability to enforce it. 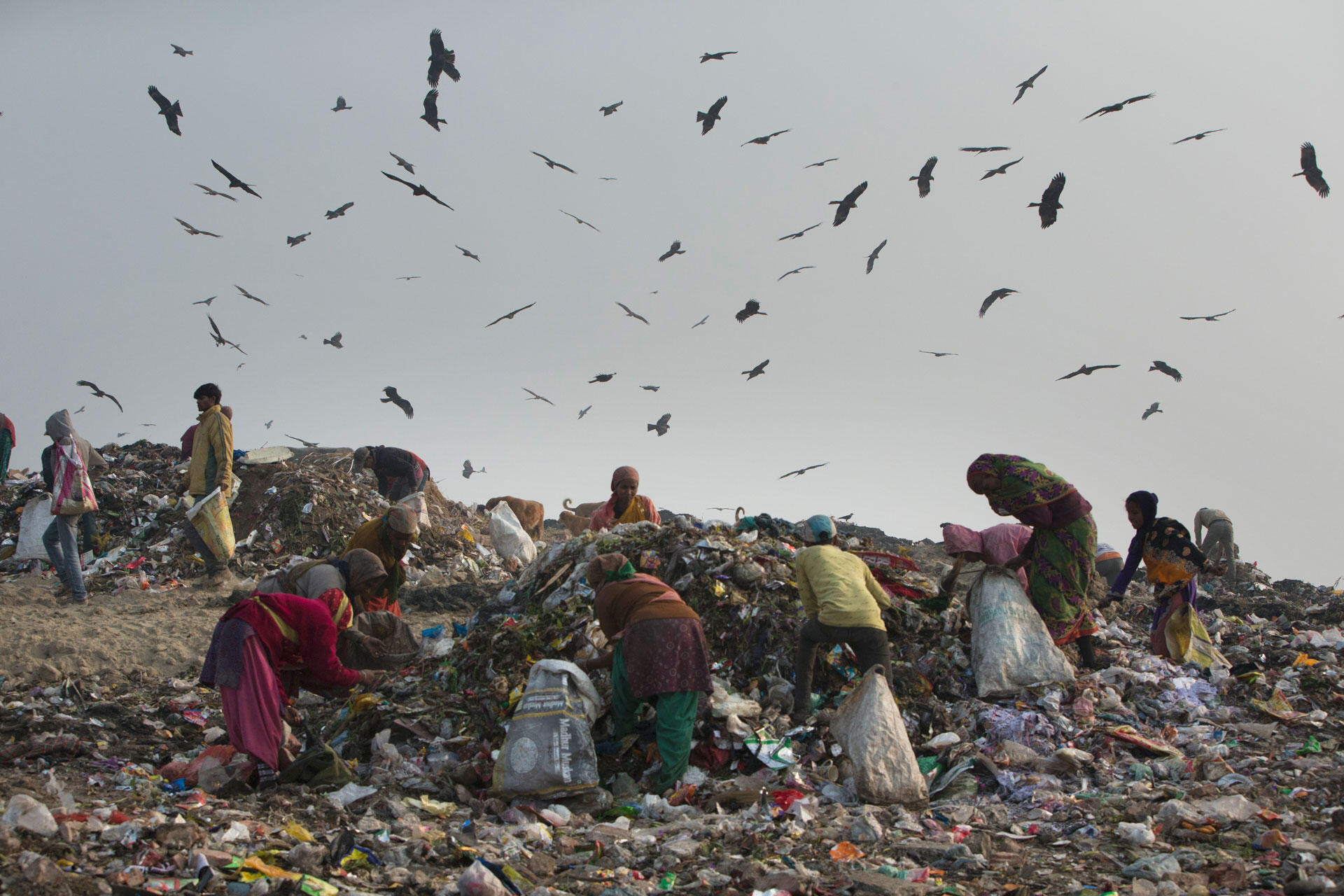 At Wildlife Rescue, Saud and Shahzad continue to care for the stream of patients. The flow will likely pick up come breeding season; they saw 400 fledglings last year alone. Treating so many birds is a huge undertaking, especially considering that the brothers also work day jobs, manufacturing bathroom accessories. Ultimately they plan to run a full-fledged bird hospital, but for now they run the clinic in their spare time with the help of volunteers such as Muhammad Farman, a teenager and ex-champion kite flyer who gave up the sport when he saw how it injured birds.

Saud and Shahzad don’t expect people to abandon the tradition, but they are encouraging their neighbors to make a slight adjustment to another custom that could have an impact.

In the city’s Muslim quarter, where the brothers live, residents toss scraps of meat for Black Kites to snatch in flight, a symbolic gesture of their support for others in need. Many people make the offerings on rooftops in the late afternoon, each drawing a dozen or more aerial acrobats vying for a morsel. Unfortunately, it’s also about the time that children get home from school and go fly their paper kites. The brothers now make their atonements earlier in the day, and they’re spreading the suggestion to others. It’s a small shift, but one that could help kites—the avian kind and the paper kind—cross paths less often. 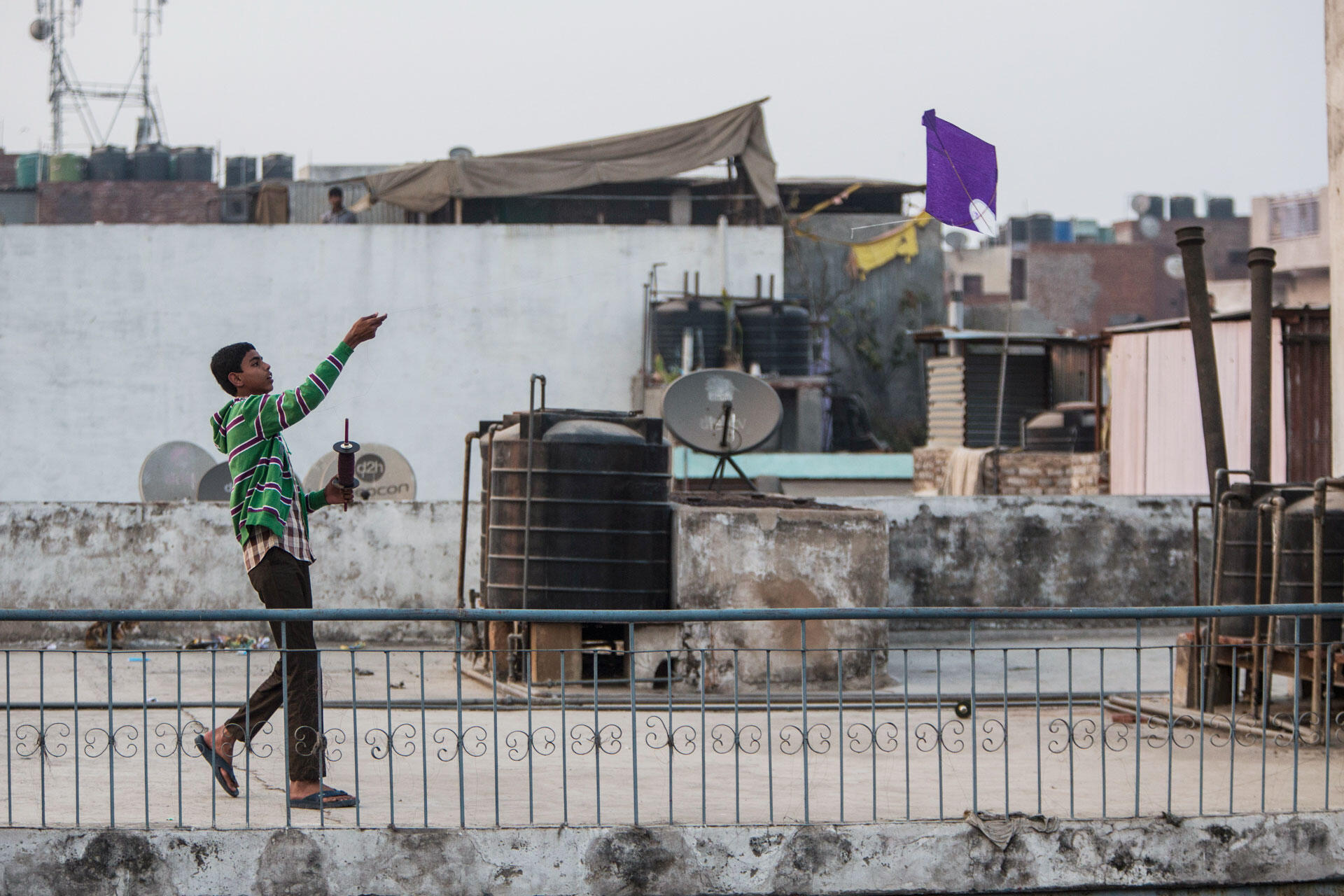 A young man flies a paper kite. The popular pastime can have fatal consequences for the avian kites, which can become tangled up in or cut by the string. Sharp threads have fatally injured humans, too. Photo: Luke Massey 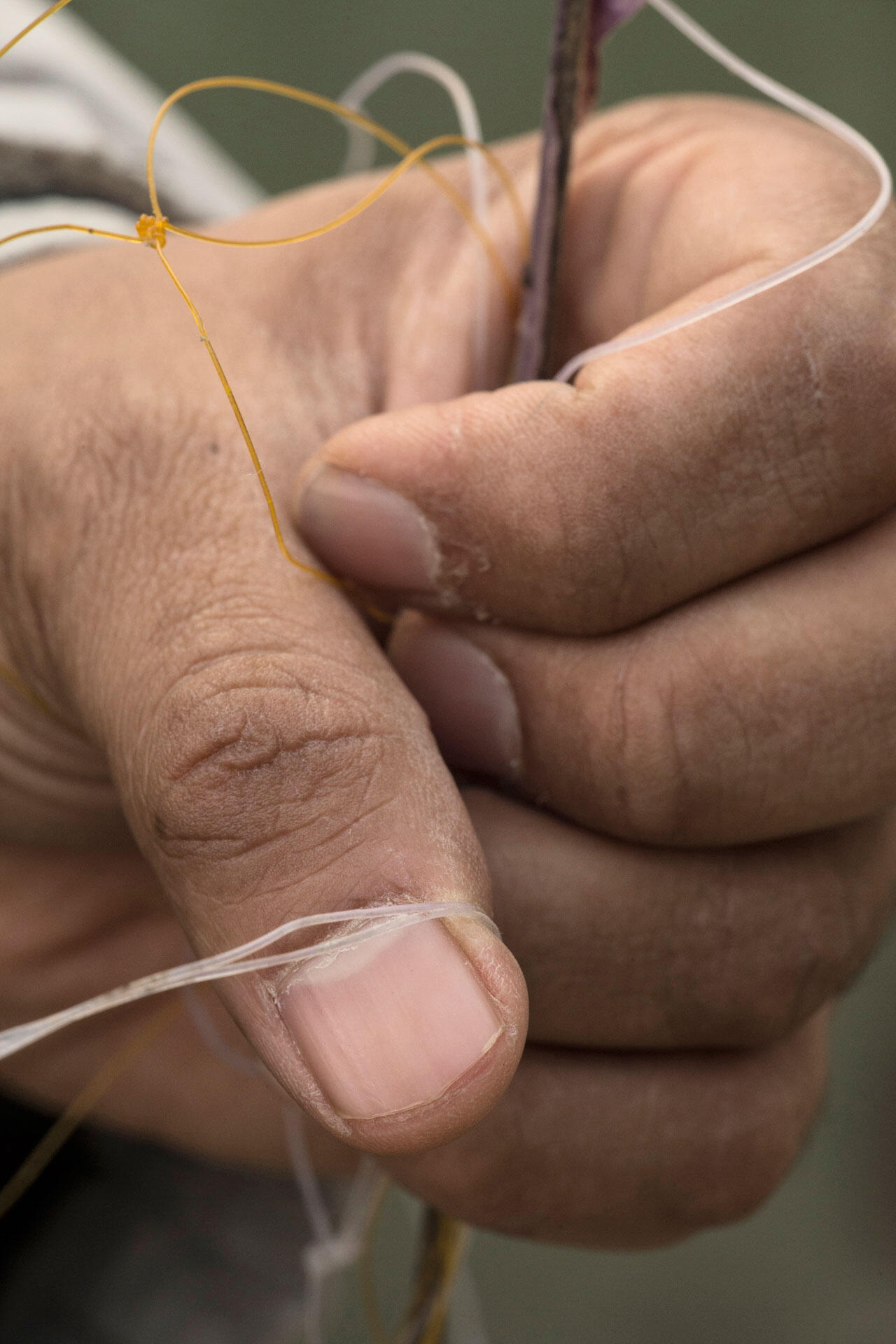 Manja, or thread coated in ground-up glass or metal, is in high demand because it allows competitors to cut down each other’s kites in aerial duals. The sharp string is banned in Delhi, but its use still persists. Photo: Luke Massey 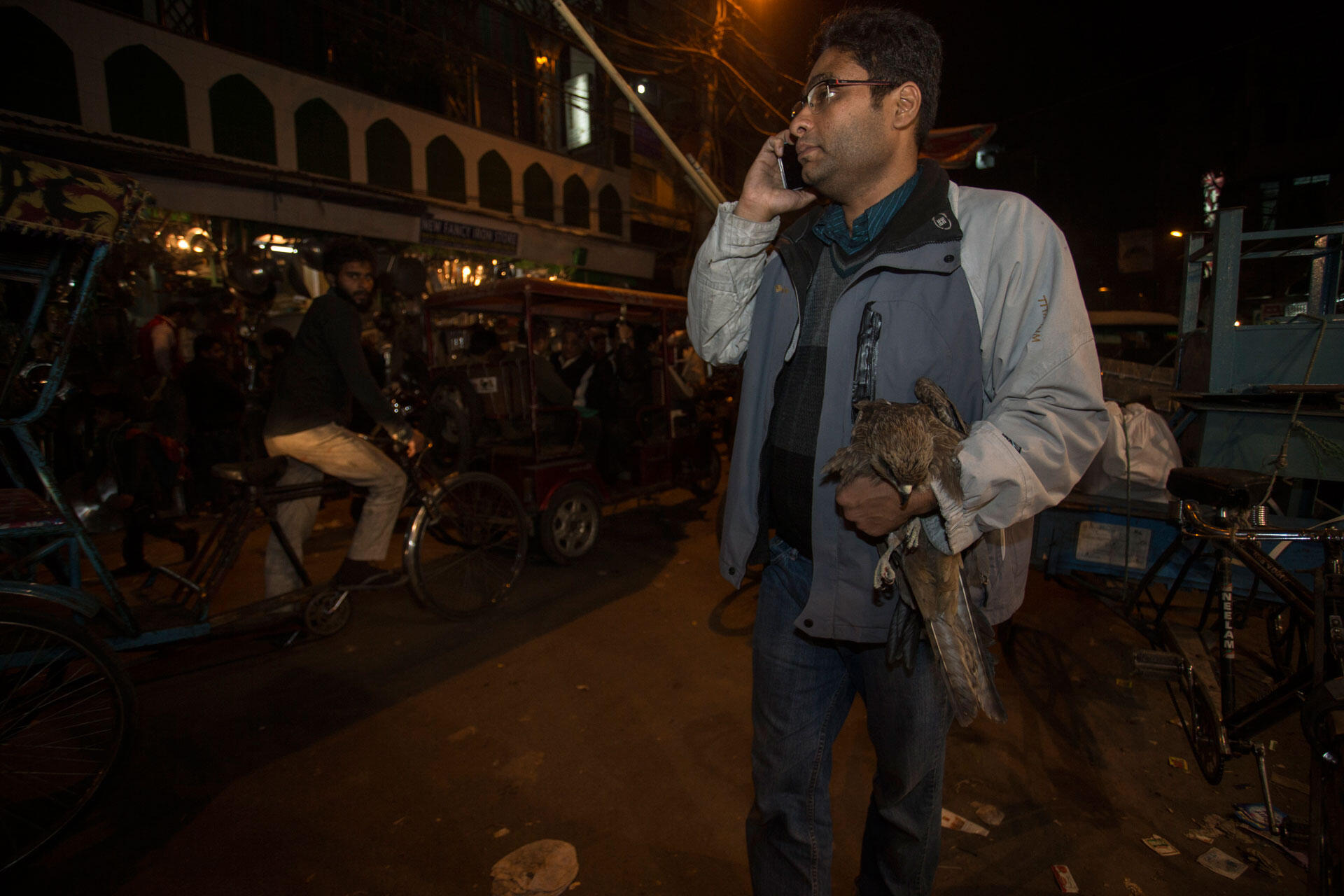 Nadeem Sherzhad carries a rescued bird back to his house for treatment. Photo: Luke Massey 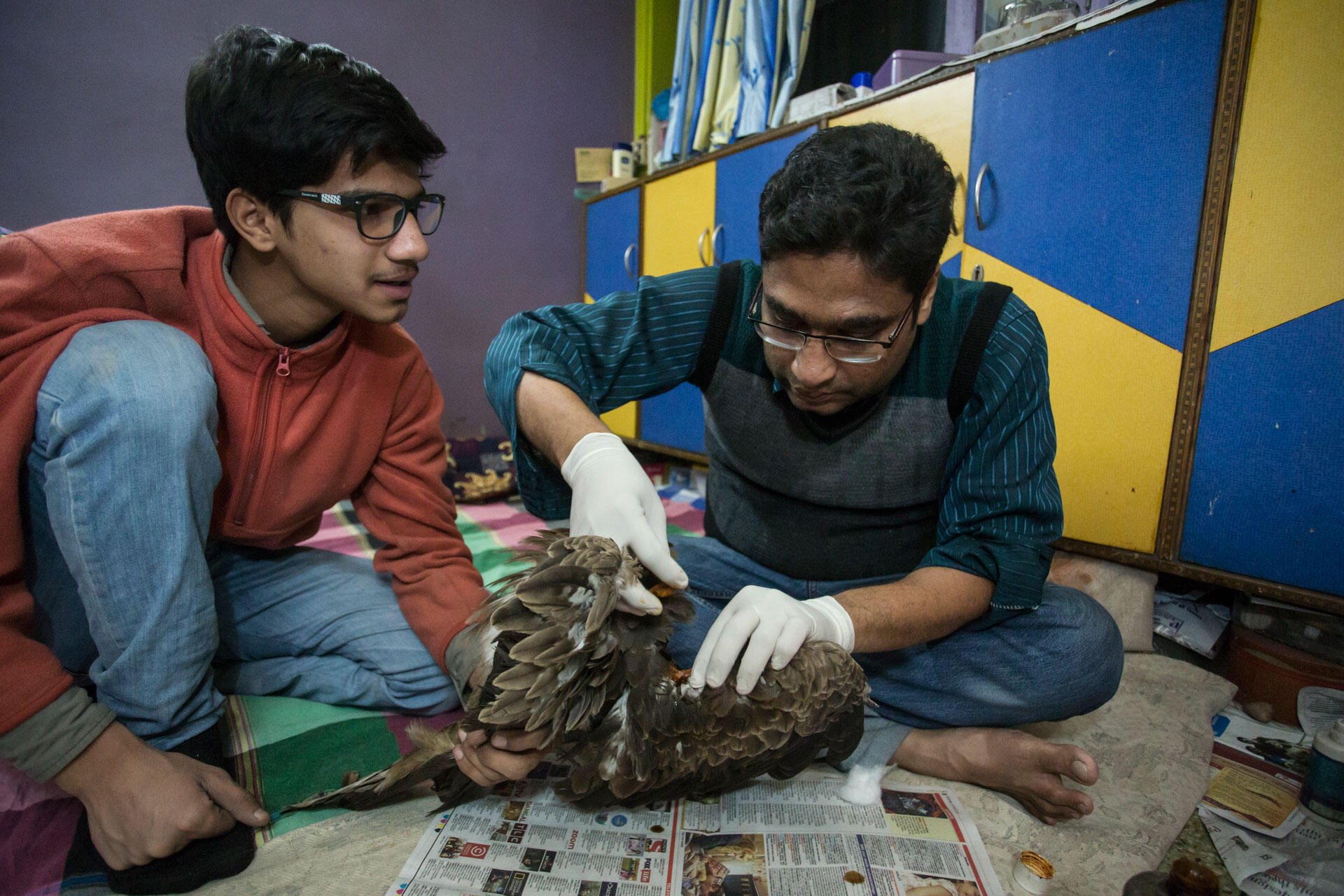 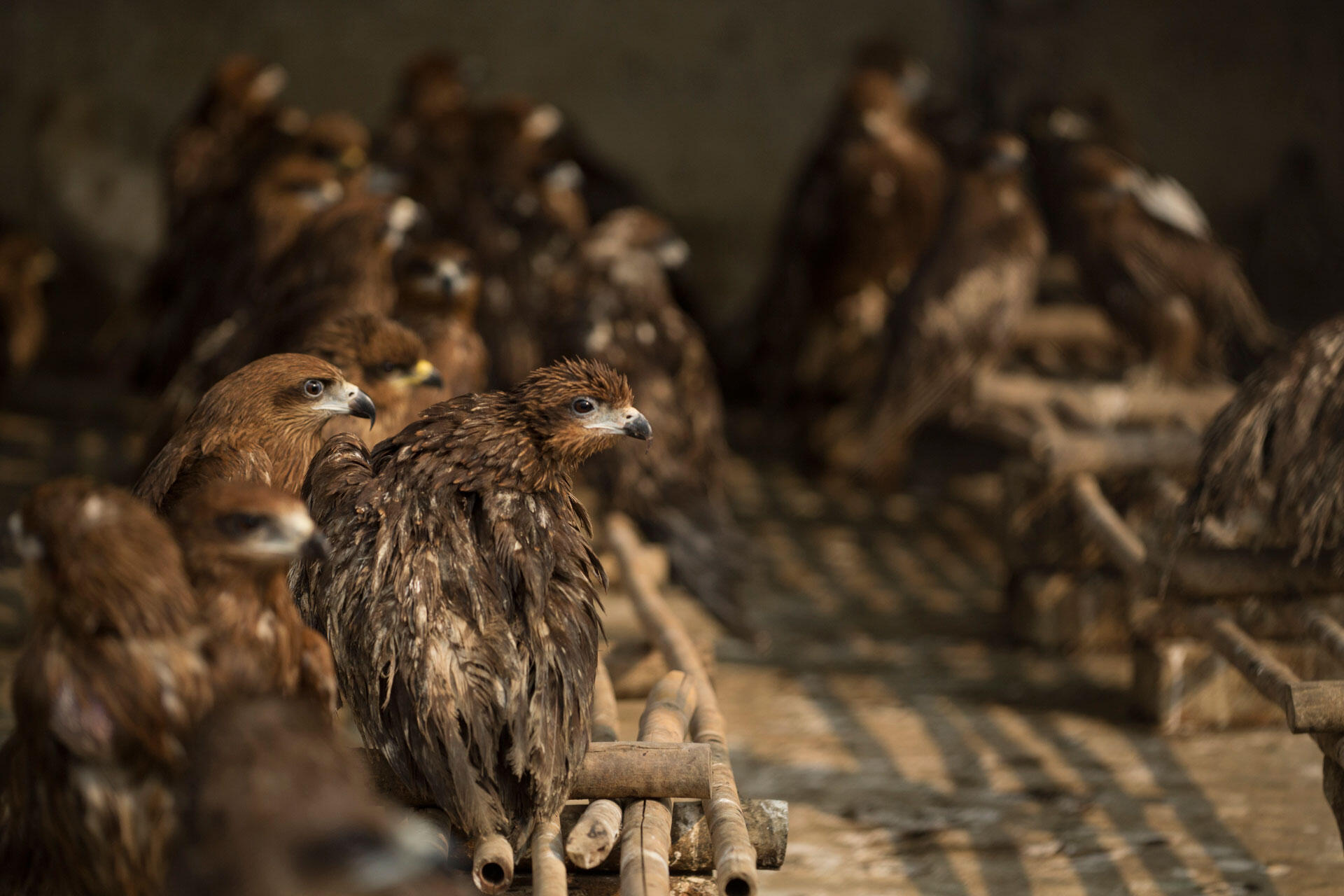 Many of the kites rehabilitating in the rooftop enclosure are victims of paper kite strings. Photo: Luke Massey 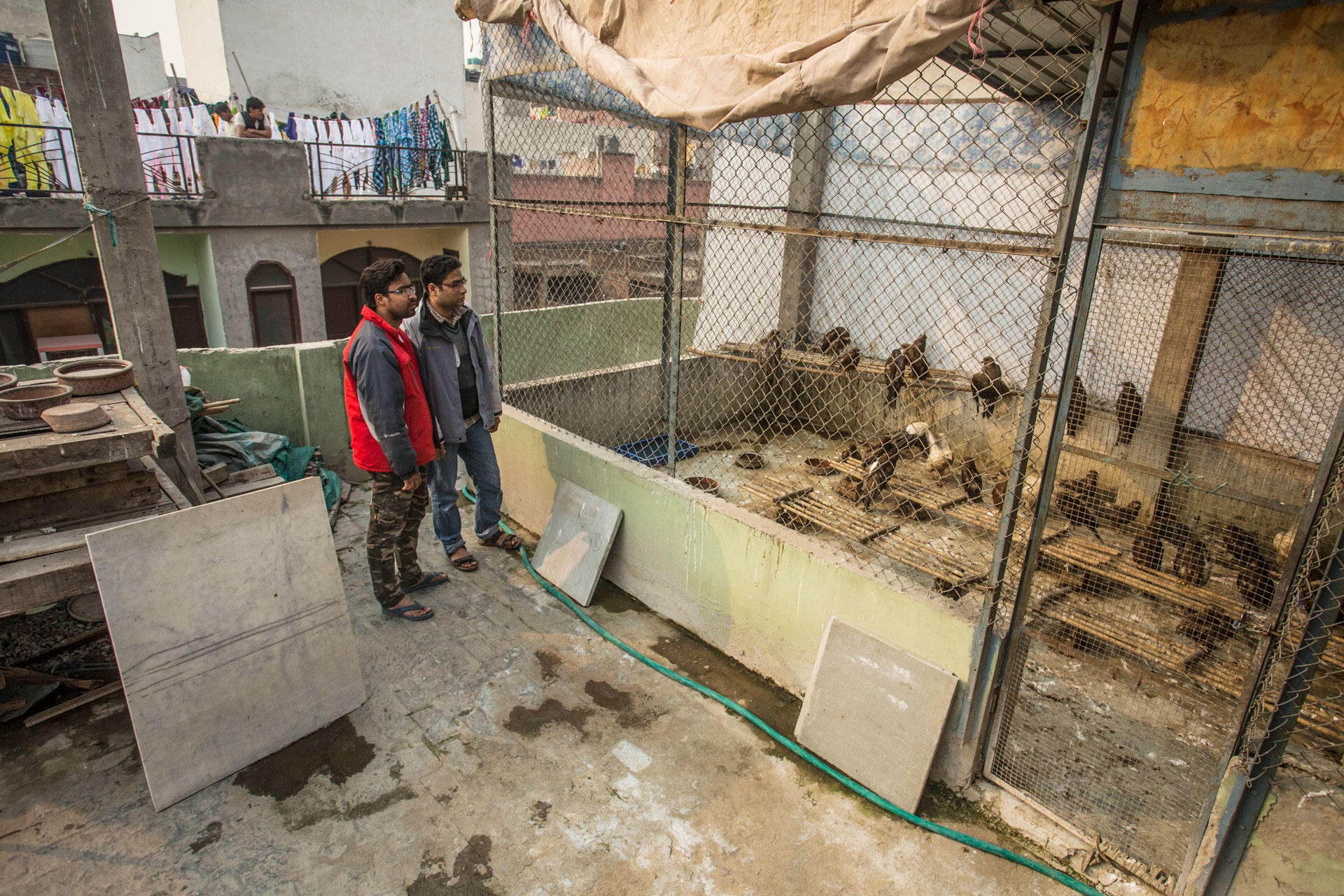 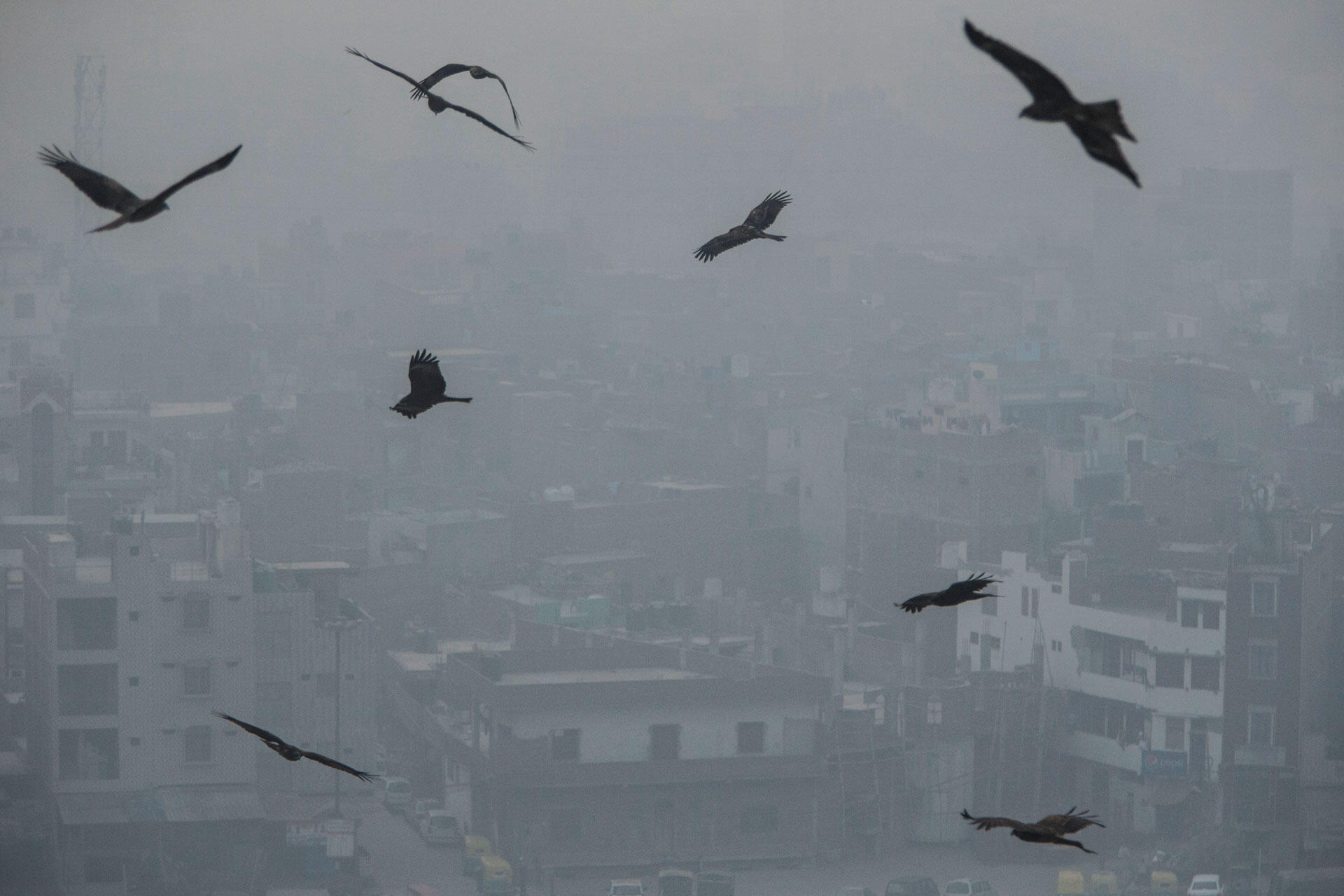