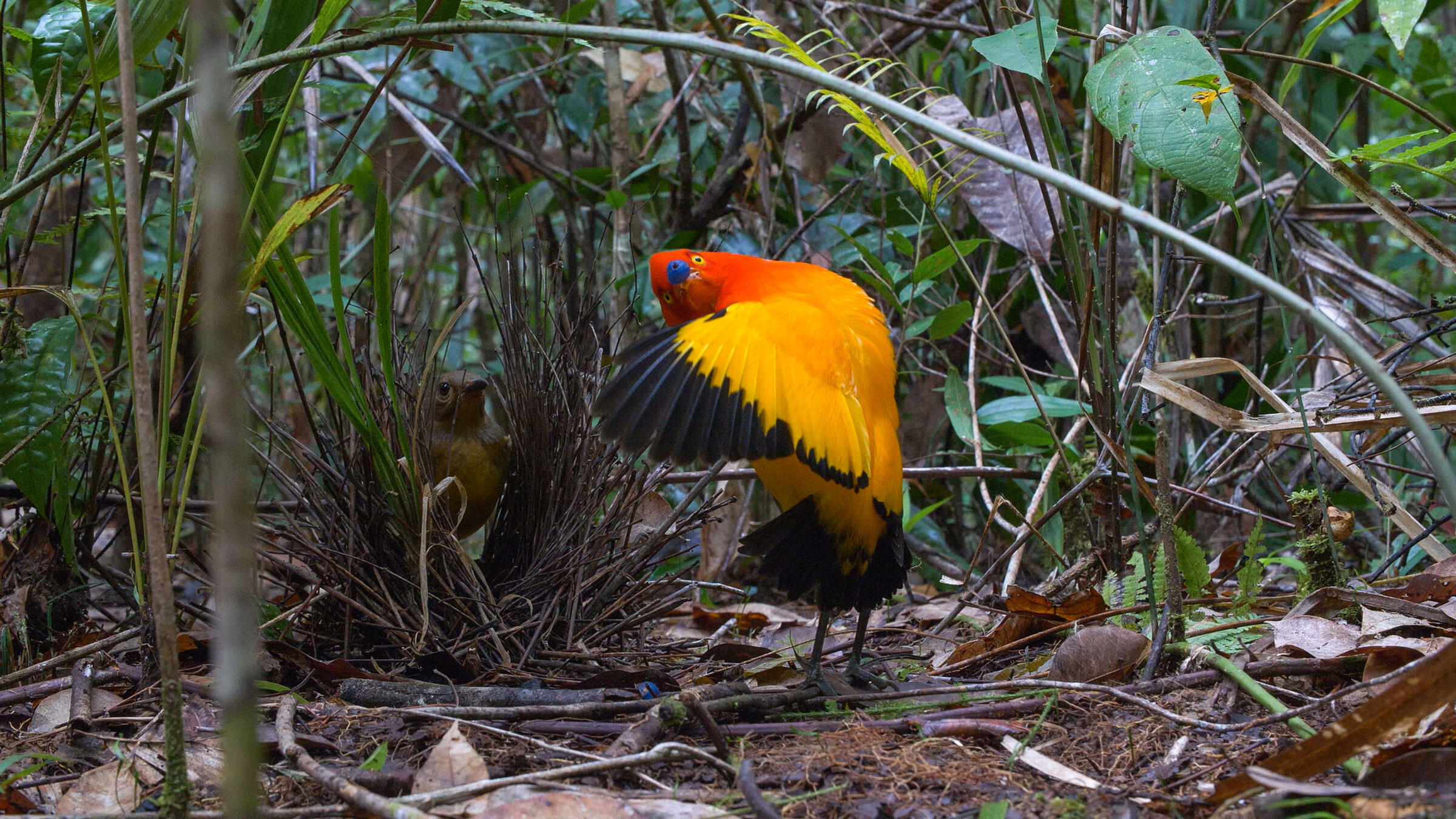 Flame Bowerbirds. Photo: Courtesy of Dancing with the Birds

In Netflix's ‘Dancing with the Birds,’ We See the Other Side of Bizarre Avian Spectacle

The internet is no stranger to the wacky bird dance. Clips of smiling (and frowning) birds-of-paradise, moonwalking manakins, and other avian wonders abound online. So when I sat down to watch Dancing with the Birds, a new Netflix documentary produced by the team behind Our Planet and narrated by the English actor Stephen Fry, I assumed it would be akin to a circus: a series of performances stitched together without much storytelling or natural history. There are more than enough avian dancers online to fill a 50-minute film.

But Dancing with the Birds is more than a best-of compilation. The filmmakers introduce us to individual birds as the male dancers strive to present their best side to females watching nearby. We see not only their successes, but their failures, too, all affectionately narrated by the richly accented Fry. This approach lets us relate to the birds and their strange, idiosyncratic behaviors as they face an existential challenge: In a cacophonous forest with sometimes hundreds of other flashy bird species, how do they find the one—or, for that matter, anyone?

Extravagant dance moves help. A King-of-Saxony Bird-of-Paradise has the longest head feathers of any bird, Fry’s voiceover says, and the way he waves them around like a ribbon dancer while bouncing on a vine is captivating. In another scene, a pair of male Lance-tailed Manakins, who have performed together for five years, bounce and tumble over each other in perfect coordination, showing off their scarlet crowns and cerulean capes as a female judges nearby.

Some of the dances, though, can only be described as weird. In one scene, Guianan Cock-of-the-Rocks the color of macaroni and cheese arrange themselves on the forest floor and point their butts toward a nearby female, hopping occasionally. “It takes a trained eye to spot the prettiest bottom,” Fry says, but to my human eye, it’s far from clear what exactly makes one bottom better than the other. The female chooses her favorite butt, for whatever reason, and the rest of the males raucously squawk in protest.

Another compelling tactic to convince her that you’re Mr. Right: Keep a meticulously clean and impeccably decorated abode. On this point, the MacGregor’s Bowerbird is an inspiration. He builds a stunning tower by stacking and weaving thin twigs towards the sky, stringing up ornamental clumps of plant matter and sap just so. “MacGregor knows just what he wants,” Fry says, “and everything has its place.” In the same segment, the narrator seems to tease a Flame Bowerbird who repeatedly picks up and drops a blue leaf. “Should it go here? Here? Or, perhaps, here, or even here?” Fry says. Finally, with the leaf arranged indistinguishably from those previous, the bowerbird is satisfied. “Perfect,” the narrator agrees.

What stands out about Dancing with the Birds is that even though the focus remains on the males—their preparations and their dances—the females are not swept to the sidelines. The female gaze is perhaps the real star of the film. Instead of being purely dazzled by spectacle, I found myself examining the dances and spaces as if I were a female bird evaluating prospects. Is that blue berry, so tenderly presented by a Flame Bowerbird, really enough to convince me that I should raise his offspring? Does that Carola’s Parotia's nine-part ballet, set by the filmmakers to T. Rex’s “Cosmic Dancer,” qualify him as a good partner?

Ultimately, the film shows us, we don’t even know what to look for. Only a female bird knows—and after she accepts a dance and mates, she disappears in the forest understory, taking her secret with her.

Dancing with the Birds premieres on Netflix on October 23. Click here to watch the trailer.

Turns out the smiley Superb Bird-of-Paradise has a sister species, and its moves are quite different. Judge the video evidence for yourself.

Nature has way better moves than the Funky Chicken.