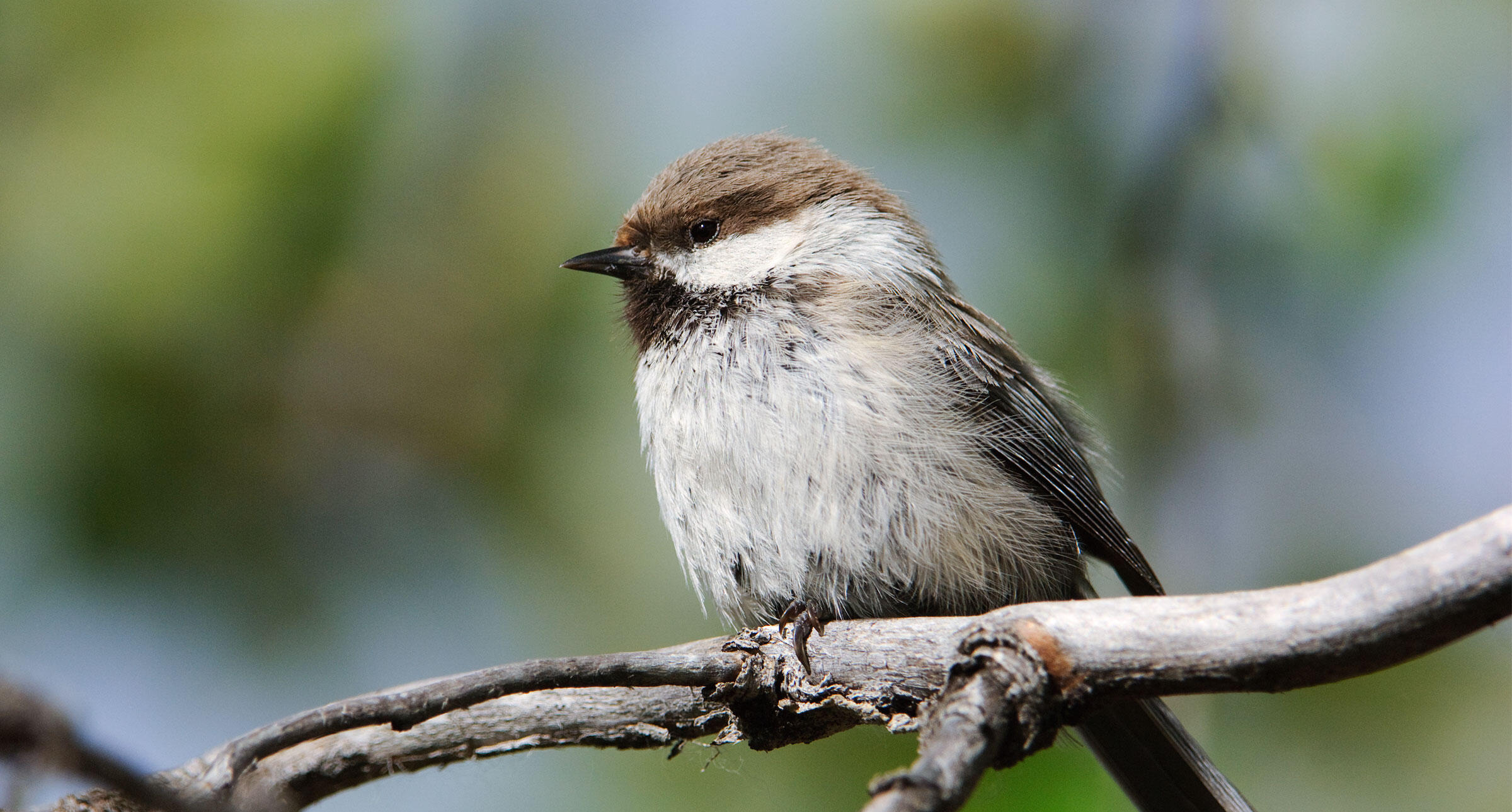 The Gray-headed Chickadee, otherwise known as the Siberian Tit, is a common yard bird in some northern parts of the world. But in Alaska, the bird's whereabouts, behaviors, and numbers are a real riddle—one that seven zealous birders set out to solve last summer. Photo: Gerrit Vyn/Minden Pictures

In Search of the Gray-headed Chickadee, the Most Mysterious Bird in the U.S.

Audubon’s chief scientist recounts his trek to the threatened Arctic National Wildlife Refuge, one of the last havens for one of the rarest birds in North America. 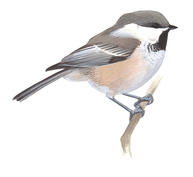 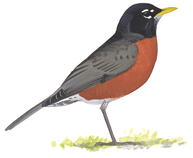 The storm came without warning. The morning skies had looked clear against the stark expanse of Alaska’s North Slope, and the summer solstice was mere hours away. Yet here we were, the seven of us, crowded into a modest cook tent as the squall lashed against the thin, nylon walls. Warming up giant river rocks on the camp stove probably wasn’t the safest move, but cozy toes trump good judgment on days like this.

Twelve hours in, the snow showed no signs of letting up. We burned through our stories and retreated to our sleeping bags, hoping to survive another night.

We set off from Arctic Village, Alaska, on June 17, 2016: two local guides and five birders, ready to get a taste of some real high-country wilderness. Each of us were strapped to 50 pounds of gear to carry us through our week-long trek. The rugged route would take us over air, rapids, and ice, delivering us deep into the northwest end of the Arctic National Wildlife Refuge and its 19 million glorious acres of coastal plain, alpine tundra, boreal forest, and other habitats rich with natural spoils. It also plays host to migrating birds from every U.S. state, along with the world’s largest mass of porcupine caribou and Dall sheep. But we had our sights set on something a little less grand. Our destination was a small, bleak grove of balsalm poplars beyond the 64th parallel—and our target was a small, bleak bird known as the Gray-headed Chickadee.

“Seriously, a chickadee?” some might ask. Yet this isn’t just any old chickadee: It’s one of the most common chickadees on the planet. Its range blankets much of the extreme northern latitudes of Europe and Asia, and its global population is estimated to be in the millions. In Russia and Scandinavia, the species is named the Siberian Tit. The white-cheeked, rosy-flanked birds are often seen dangling off conifers, feeders, and bundles of cured meat around people’s homes.

On the flip side of the North Pole, though, the story is starkly different. Here, the species is so rare, it’s considered the Holy Grail of chickadees. The only known breeding population is tucked away in the Arctic Refuge, a plane ride away from the nearest human settlement. (There’s a smattering of eBird records as far south as Fairbanks and Denali, but they peter out around 2009.) “Few numbers, a remote location, and lack of knowledge all combine to make [the Gray-headed Chickadee] very difficult to observe,” our trip leader David Shaw tells me. Because of this, details of the species’ North American history are hazy. How did the birds flee Siberia, and when did they first cross over? (It may have happened during warmer, prehistoric climes when faunal exchanges over the Aleutian land bridge were common.) Do they migrate outside of nesting season? And more importantly, how will they fare if there’s more drilling in the refuge?

Which brings us back to our miserable, yet determined huddle on the frozen banks of the Canning River. The crew is a motley one, with me (Audubon's chief scientist), Shaw, wilderness expert Jon Hirsch, Audubon Alaska director Nils Warnock, biotech executive and Audubon board member George Golumbeski, and ornithologists Hans Bishop and Kate James. None of these souls have ever seen a Gray-headed Chickadee—and we’re not the lonely ones: There haven’t been any North American eBird reports of the species since June of 2015. The only birder I’ve met who’s had a reliable sighting is Travis Booms, an Alaska Department of Fish and Game biologist. His description of the encounter is guarded—perhaps to prevent wild chases like ours—but he says it happened in the refuge five years ago, which isn’t exactly a vote of confidence. And now, with this storm trying to bury us, our quest is feeling even more untenable.

Fortunately, we wake to peaceful skies the next morning. The four inches of powder blanketing our camp is normal for the Arctic—except that today is also the start of the solstice, which makes it the longest day of the year. We decide to use the spare hours of light to cross the tundra on foot, and head to the groves for the final leg of our journey.

There’s a reason why very few birders venture to northern Alaska in search of the chickadee. Growing up, my family used to watch extreme-birding slideshows at every get-together (think River Monsters, but with less fish, more feathers, and all still images). I can’t recall any of them featuring, or mentioning, the Gray-headed Chickadee.

The journey to the Arctic Refuge is harrowing—even in the heart of June. To reach the Canning River, we first had to board a bush plane from Arctic Village. We then squeezed into two rubber rafts to navigate the braided Marsh Fork. It’s a near-impossible feat without a guide and the right gear; some stretches were still covered in ice sheets. A week after we left the refuge, two visitors died while rafting the same route.

Marching over the rock-strewn tundra was a challenge, too. The summer weather would veer from the high 70s to the low 30s in the space of an afternoon, making it hard to get comfortable. We were either sweaty, or numb, or blinded by the emptiness that spread in front of us. The landscape was dotted with a kind of scrubby microhabitat, but beyond that, it was just blank and silent for miles. There are no roads or cell service this far up into the refuge. It truly is a den of isolation: a place where a chickadee could live for years and never have to meet a human being.

Somehow, in this barren environment, the birds have found their niche. The same can be said for the balsam groves they nest in. By any expectation, poplars shouldn’t grow above the treeline, which ends near the 70th parallel. The conditions along the river, however, create a microclimate that allows them to persist. These slow-growing plants sprout in rows up to 100 feet wide; larger groves can run longer than a mile. But as gnarled and scant as they look, they provide more than enough cover and seeds for the chickadees.

After a day’s worth of slogging, we finally reach the first set of poplars. We break ranks to weave in and out of the groves, looking for the slightest signs of the birds: a small cavity opening, a cup-like nest, an errant, tawny feather, or a quick flit of wings. After a fruitless hunt, we try luring it with calls. Cheoow, cheoow, schik-a-day—a harsher scolding sound than the Boreal Chickadee’s.

A cheerful rattle rings out in response. Three Smith’s Longspurs, a bird with a beautifully painted face that’s also in grave danger of climate change, sing in concert in the distant tundra. Sadly, we hear no chickadees. We lumber along to inspect more groves, swatting at mosquitoes and yelling “HEY BEAR” to deter any grizzly-sized surprises.

I wish I could say that on our second, third, fourth grove, we parted the balsam branches to reveal a solitary Gray-headed Chickadee. But despite all our planning, our plodding through snow, ice, and water, and our pleading to the birding gods, we had no such luck. “It was one of the very few times I’ve worked so hard to not see the bird,” Golumbeski confides to me after the trip.

Of all things, we did spy slews of American Robins. While robins do breed on the North Slope, they shouldn't be all that common. Yet somehow these temperate-adapted birds are doing just as well in the Alaskan Arctic as in my yard back in Washington, D.C. Their constancy was a reminder of how rare the species we were seeking was—and how climate change could be disturbing the region’s ecology.

And so, the chickadee remains a riddle to me and my fellow fanatics. Maybe the birds were in the groves all along, noiseless and still as they sat on their eggs. Or maybe they’ve been passing unnoticed at feeders, disguised as a grizzled version of the Boreal Chickadee. Or maybe its minuscule population is dropping, pulling it closer to local extinction. With the government mounting new assaults against the Arctic, the need to unravel this bird’s story is even more important now. “I can’t think of another species in North America that is so little known," Shaw says. "From a conservation standpoint, that is frightening." He’s right. Preserving any species is a shot in the dark without a good sense of its biology; we can hardly protect its key ecological needs if we don’t know what they are. While this quest was centered on thrills and life lists, as an ornithologist and conservationist, I can’t help but reflect on the bigger picture for the bird.

As we touched down in Fairbanks, the crew’s morale was surprisingly high. Each of us needed a shower, a clean outfit, a feast, and a long phone call home. But we were also ready to do it all again: to scour the tundra for a five-inch feeder bird and decide if the world needs to save it. And though we missed that satisfaction, somehow it didn’t feel like we failed. Our adventure made it clear that the Arctic Refuge is invaluable, and it made the mystery of the Gray-headed Chickadee deeper and more personal.

Gary Langham has been Chief Scientist for the National Audubon Society since 2011, during which he helped author the 2014 “Bird and Climate Change Report.” He previously served as the lead scientist for Audubon California for almost five years.